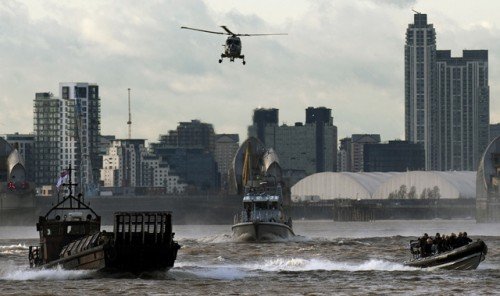 Military exercises on Thames River in London in preparation for the Olympics.

The upcoming summer Olympics are turning London into a highly militarized zone. All kinds of weaponry are currently being tested and deployed in the city such as land-to-air missiles, fighter jets, amphibious assault ships and machine guns. These highly controversial measures are not welcomed by many Londoners as they create an unnecessary climate of fear and oppression in the city.

The weapons being tested do not only have a military purpose. New crowd control weapons will be deployed during the Olympics such as high powered “sonic gun”. Here’s an article on this new weapon.

* UK military to have non-lethal sonic weapon at Olympics

Britain’s military will be armed with a sonic device that can be used as a high-volume loudspeaker or a non-lethal weapon to disperse crowds at this summer’s Olympic Games in London, the defence ministry said on Friday.

The equipment, which can project a piercing sound over hundreds of metres causing physical pain, has been used during protests at the G20 summit in Pittsburgh in 2009 and against pirates operating off the Somali coast.

The Ministry of Defence said it expected to use it primarily in loudspeaker mode to communicate with boats it wants to stop on the River Thames.

Defence chiefs have already caused controversy by announcing plans to put surface-to-air missiles on the top of residential buildings near the Olympics site in east London.

Fighter jets roared over the capital and helicopters were seen hovering over the Houses of Parliament this month during a nine-day military exercise to prepare for Britain’s biggest peacetime security operation.

The LRAD (Long Range Acoustic Device), made by U.S. company LRAD Corporation, can be mounted on the side of a ship or on the top of a vehicle. Some versions are roughly the same size and shape as a dustbin lid.

It can generate noises up to around 150 decibels, similar to a gunshot, and has a maximum range of 3 km or 1.8 miles.

The device can also emit a warning alarm that sounds like a police siren and “potentially prevents the use of harmful or deadly force”, LRAD says on its website.

Police and military planners say they are preparing for a range of security threats at the Olympics including protesters trying to disrupt events and attacks using hijacked airliners.

The police state tactics surrounding the Olympics are not simply limited to the deployment of high-powered weapons. Many people considered “suspicious” or “undesirable” by UK authorities are being denied access from the country or have been banned from the games – some simply because they’ve objected the construction of Olympic facilities near their homes. These kinds of tactics are typical of police states where civilians are being punished for “thought crimes”. Here’s a report on these pre-Olympic bans.

The least we can say is that these 2012 London Olympics will be very interesting – and not because of the sporting events.

Related Topics:olympicspolice state
Up Next

Michael Jackson to Be “Ressurected” on a Billion Pepsi Cans