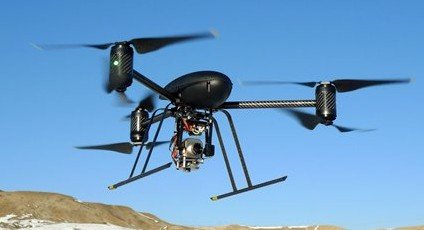 Already used by the US Army in war-zones such as Afghanistan, unmanned drones are about to be used by police departments, border patrols and even power companies. These remote-controlled planes can be equipped with high powered cameras, heat sensors and even weapons (they have been used to kill “terrorists” in the Middle-East) to track, monitor and potentially wreck havoc on groups or specific individuals. Although not yet used in the US their use on domestic soil is pretty much an inevitability. For example, the ShadowHawk, a drone conceived by the company Vanguard, greatly interests US law-enforcement groups for its weapon-bearing qualities. Its “international” version can be equipped with a 40mm grenade launcher and a 12-guage shotgun – all of this can be controlled from a laptop computer.

As a recent report from the ACLU states, unmanned drones in US domestic soil would represent “a large step closer to a surveillance society in which our every move is monitored, tracked, recorded, and scrutinized by the authorities”. Here’s an article from the Associated Press about to push for the use of drones in the US.

Heads up: Drones are going mainstream.

Civilian cousins of the unmanned military aircraft that have tracked and killed terrorists in the Middle East and Asia are in demand by police departments, border patrols, power companies, news organizations and others wanting a bird’s-eye view that’s too impractical or dangerous for conventional planes or helicopters to get.

Along with the enthusiasm, there are qualms.

Drones overhead could invade people’s privacy. The government worries they could collide with passenger planes or come crashing down to the ground, concerns that have slowed more widespread adoption of the technology.

Despite that, pressure is building to give drones the same access as manned aircraft to the sky at home.

Some impetus comes from the military, which will bring home drones from Afghanistan and wants room to test and use them. In December, Congress gave the Federal Aviation Administration six months to pick half a dozen sites around the country where the military and others can fly unmanned aircraft in the vicinity of regular air traffic, with the aim of demonstrating they’re safe.

The Defense Department says the demand for drones and their expanding missions requires routine and unfettered access to domestic airspace, including around airports and cities. In a report last October, the Pentagon called for flights first by small drones both solo and in groups, day and night, expanding over several years. Flights by large and medium-sized drones would follow in the latter half of this decade.

Other government agencies want to fly drones, too, but they’ve been hobbled by an FAA ban unless they first receive case-by-case permission. Fewer than 300 waivers were in use at the end of 2011, and they often include restrictions that severely limit the usefulness of the flights. Businesses that want to put drones to work are out of luck; waivers are only for government agencies.

Congress has told the FAA that the agency must allow civilian and military drones to fly in civilian airspace by September 2015. This spring, the FAA is set to take a first step by proposing rules that would allow limited commercial use of small drones for the first time.

Until recently, agency officials were saying there were too many unresolved safety issues to give drones greater access. Even now FAA officials are cautious about describing their plans and they avoid discussion of deadlines.

“The thing we care about is doing that in an orderly and safe way and finding the appropriate … balance of all the users in the system,” Michael Huerta, FAA’s acting administrator, told a recent industry luncheon in Washington. “Let’s develop these six sites — and we will be doing that — where we can develop further data, further testing and more history on how these things actually operate.”

Potential civilian users are as varied as the drones themselves.

Power companies want them to monitor transmission lines. Farmers want to fly them over fields to detect which crops need water. Ranchers want them to count cows.

Journalists are exploring drones’ newsgathering potential. The FAA is investigating whether The Daily, a digital publication of Rupert Murdoch’s News Corp., used drones without permission to capture aerial footage of floodwaters in North Dakota and Mississippi last year. At the University of Nebraska, journalism professor Matt Waite has started a lab for students to experiment with using a small, remote-controlled helicopter.

“Can you cover news with a drone? I think the answer is yes,” Waite said.

The aerospace industry forecasts a worldwide deployment of almost 30,000 drones by 2018, with the United States accounting for half of them.

“The potential … civil market for these systems could dwarf the military market in the coming years if we can get access to the airspace,” said Ben Gielow, government relations manager for the Association for Unmanned Vehicle Systems International, an industry trade group.

The hungriest market is the nation’s 19,000 law enforcement agencies.

Customs and Border Patrol has nine Predator drones mostly in use on the U.S.-Mexico border, and plans to expand to 24 by 2016. Officials say the unmanned aircraft have helped in the seizure of more than 20 tons of illegal drugs and the arrest of 7,500 people since border patrols began six years ago.

Several police departments are experimenting with smaller drones to photograph crime scenes, aid searches and scan the ground ahead of SWAT teams. The Justice Department has four drones it loans to police agencies.

“We look at this as a low-cost alternative to buying a helicopter or fixed-wing plane,” said Michael O’Shea, the department’s aviation technology program manager. A small drone can cost less than $50,000, about the price of a patrol car with standard police gear.

Like other agencies, police departments must get FAA waivers and follow much the same rules as model airplane hobbyists: Drones must weigh less than 55 pounds, stay below an altitude of 400 feet, keep away from airports and always stay within sight of the operator. The restrictions are meant to prevent collisions with manned aircraft.

Even a small drone can be “a huge threat” to a larger plane, said Dale Wright, head of the National Air Traffic Controllers Association’s safety and technology department. “If an airliner sucks it up in an engine, it’s probably going to take the engine out,” he said. “If it hits a small plane, it could bring it down.”

Controllers want drone operators to be required to have instrument-rated pilot licenses — a step above a basic private pilot license. “We don’t want the Microsoft pilot who has never really flown an airplane and doesn’t know the rules of how to fly,” Wright said.

Military drones designed for battlefields haven’t had to meet the kind of rigorous safety standards required of commercial aircraft.

“If you are going to design these things to operate in the (civilian) airspace you need to start upping the ante,” said Tom Haueter, director of the National Transportation Safety Board’s aviation safety office. “It’s one thing to operate down low. It’s another thing to operate where other airplanes are, especially over populated areas.”

Even with FAA restrictions, drones are proving useful in the field.

Deputies with the Mesa County Sheriff’s Office in Colorado can launch a 2-pound Draganflyer X6 helicopter from the back of a patrol car. The drone’s bird’s-eye view cut the manpower needed for a search of a creek bed for a missing person from 10 people to two, said Ben Miller, who runs the drone program. The craft also enabled deputies to alert fire officials to a potential roof collapse in time for the evacuation of firefighters from the building, he said.

The drone could do more if it were not for the FAA’s line-of-sight restriction, Miller said. “I don’t think (the restriction) provides any extra safety,” he said.

The Montgomery County Sheriff’s Office, north of Houston, used a Department of Homeland Security grant to buy a $300,000, 50-pound ShadowHawk helicopter drone for its SWAT team. The drone has a high-powered video camera and an infrared camera that can spot a person’s thermal image in the dark.

“Public-safety agencies are beginning to see this as an invaluable tool for them, just as the car was an improvement over the horse and the single-shot pistol was improved upon by the six-shooter,” said Chief Deputy Randy McDaniel, who runs the Montgomery drone program.

The ShadowHawk can be equipped with a 40 mm grenade launcher and a 12-guage shotgun, according to its maker, Vanguard Defense Industries of Conroe, Texas. The company doesn’t sell the armed version in the United States, although “we have had interest from law-enforcement entities for deployment of nonlethal munitions from the aircraft,” Vanguard CEO Michael Buscher said.

“The Constitution is taking a back seat so that boys can play with their toys,” Burke said. “It’s kind of scary that they can use a laptop computer to zap people from the air.”

A recent ACLU report said allowing drones greater access takes the country “a large step closer to a surveillance society in which our every move is monitored, tracked, recorded, and scrutinized by the authorities.”

The Electronic Frontier Foundation, which focuses on civil liberties threats involving new technologies, sued the FAA recently, seeking disclosure of which agencies have been given permission to use drones. FAA officials declined to answer questions from The Associated Press about the lawsuit.

“Today anybody— the paparazzi, anybody — can hire a helicopter or a (small plane) to circle around something that they’re interested in and shoot away with high-powered cameras all they want,” said Elwell, the aerospace industry spokesman. “I don’t understand all the comments about the Big Brother thing.”
– Source: AP

What Happened to Whitney Houston?