A “lone sniper” killed 5 police officers while injuring 11 others amidst a protest against police killings. This violent event occurred at a strategic time and perfectly serves the elite’s race war agenda. Was Micah Johnson a patsy of the elite?

The violent deaths of two Black men at the hand of police has prompted, once again, nationwide protest against police killings, especially within the Black community. The fact that the deaths of Alton Sterling and Philando Castile were recorded on film only accentuated the outrage throughout the U.S. as viewers witnessed the graphic and sickening sight of murder. The videos also prevented police from providing an “official”, whitewashed account of the events.

These deaths ignited yet another national debate around the use of lethal force by police in situations devoid of immediate danger. Once again, Americans were faced with the fact that law enforcement has violated its own motto “to serve and protect” by killing citizens who could and should have been handled in a controlled and professional matter.

The resulting debate on the role and responsibilities of law enforcement was, however, quickly replaced by something more in tune with the elite’s agenda: Fear and racial division. Indeed, less than 48 hours after the police killings and at the height of national protest, a Black gunman shot and killed 5 police officers while injuring 11 others during a Black Lives Matter march in Dallas. The killer was later identified as Micah Johnson, a military veteran who “wanted to kill white people”. The powers that be could not have asked for a better event to change the narrative, polarize the population, accentuate racial division and justify more police oppression.

So was Micah Johnson a patsy programmed to carry out this elite-friendly operation? Difficult to say for sure. However, a look at the killer’s story provides important insight as his strange path is indeed symptomatic of a programmed slave.

Micah Johnson – Programmed in the Military?

Friends and family members reported a drastic change in Micah Johnson’s personality after his military service.

Johnson lived in Mesquite, Texas with his mother in a middle-class suburban home.  His friends described him as “sweet-hearted joker” who was involved in his community and worked with special-needs children. In 2009, Johnson enrolled in the military.

When he graduated in 2009 he joined the Amy Reserve serving in the 420th Engineer Brigade based at Seagoville, Texas where he became a carpentry and masonry specialist.

He underwent basic weapons training but was described by one fellow serviceman as a “terrible shot”.

In November 2013 Johnson was deployed to Bagram air base in Afghanistan. His job would have involved him in construction work on the base and there was no record of him being in a combat role, although there were photographs of him in military vehicles.
– The Telegraph, Dallas shooting: Who was Micah Johnson? Everything we know about the attacker

It was during his stint in the military that Johnson took a turn for the worse. According to several acquaintances, Johnson returned from Afghanistan a changed man.

“When he returned home in July 2014 friends said Johnson had changed, seeming withdrawn and to have lost the Christian faith instilled in him by his church-going mother.”
– Ibid.

“Johnson changed, she said. He was quieter, more reclusive and withdrawn, and would talk about the horrors of war. Before his tour, he was sweet and quiet, and would help other kids in the community, a neighbourhood she described as mixed, where people of all races and religions live.”
– CBC News, Dallas sniper ‘was not the same’ after time in Afghanistan, next-door neighbour says

“Micah Johnson went from being an extrovert to a “hermit”, Delphine Johnson told The Blaze website.

The military was not what Micah thought it would be,” she said. “He was very disappointed.”
– BBC, Micah Johnson: Dallas killer ‘changed’ by military experience

Johnson was sent home from the military after he was accused of sexual harassment by a female who told superiors he needed “mental help”. He may have joined the military a “sweet and quiet” person, but Johnson returned to American angry and unstable.

What happened during his stay in the military? Could his drastic change be attributed to post-traumatic stress disorder (although he was “specialized in carpentry and masonry” and was assigned to building duties)?

Could he have been subjected to MK-ULTRA programming during his military career? It’s impossible to know. One thing is certain: Military bases are a prime location for Delta programming – the mind-control program to train killers.

DELTA is known as “killer” programming and was originally developed for training special agents or elite soldiers (i.e. Delta Force, First Earth Battalion, Mossad, etc.) in covert operations. Optimal adrenal output and controlled aggression is evident. Subjects are devoid of fear and very systematic in carrying out their assignment. Self-destruct or suicide instructions are layered in at this level.

Military bases are isolated, highly secured and packed with the necessary equipment to train and program a Delta alter. However, subjecting a victim to drugs and trauma in order to breakdown the core persona and to create an alter than can be triggered at will can lead to mental instability.

When Johnson was sent home for “sexual harassment” (which is usually dealt with using counseling in the military), he sought involvement with Black power groups. But his background barred him from joining.

Ken Moore of the Collective Black People’s Movement (CBPM) said that he was asked to look into Johnson by an unidentified black activist group. When he discovered the Army veteran was discharged for sexual harassment, he labelled him “unfit for recruitment.”

In the wake of the Dallas shootings, strange facts about Johnson have surfaced in the media. First, as it is often the case in false flag operations, conflicting and contradictory information was reported by the news. Early information described a “team of coordinated snipers” carrying out killings from buildings. Law enforcement later claimed that a lone gunman carried out all of the killings.

Law enforcement originally suspected two shooters were present at the attack, but Chief David Brown said that Johnson, who was an Army reservist, had studied “shoot and scoot” tactics, where he would change locations quickly after firing off a series of rounds.

On Friday, Dallas Mayor Mike Rawlings described Johnson as “a mobile shooter” who had written manifestos on how to “shoot and move”.
– The Independent, Dallas shooter Micah Johnson wrote cryptic message in his own blood on wall before he died

Some observers wondered how one man could have killed so many armed officers, when coordinated attacks from multiple snipers appears to be a more plausible strategy.

No matter what the case may be, after the death of Micah Johnson, more strange facts surfaced about him, many of which point towards his being a patsy.

Police are trying to decipher the meaning of a cryptic message left by the suspect in the Dallas shooting amid reports that he was planing an additional attack on a much larger scale.

During two hours of negotiations with officers in, he taunted authorities, laughing at them and at one point asking how many officers he had shot, according to the city’s police chief.

Johnson insisted on speaking with a black negotiator and wrote in blood on the wall of a parking garage where police cornered and later killed him, David Brown told CNN’s State Of The Union.
– The Independent, Dallas shooter Micah Johnson wrote cryptic message in his own blood on wall before he died

In short, many facts point towards him being programmed to carry out a strategically timed action to advance the elite’s agenda. What would the elite gain from such a horrific event? The advantages are manifold.

Micah Johnson was killed by a police robot equipped with a bomb. This unprecedented method of neutralizing a threat has raised ethical questions, as it is indeed one of the first cases of police killing an individual using a robotic device. Was there a better event to introduce this new killing method?

On a larger scale, these type of events justify the militarization of police as a whole, complete with military grade equipment and guerrilla tactics. As more crimes involve military tactics, the police will be justified to use a military-style response. The concepts of domestic terrorism and martial law are becoming an integral part of law enforcement vocabulary.

The Dallas shootings also justified a more immediate action, in the use of military grade force by police against protesters. 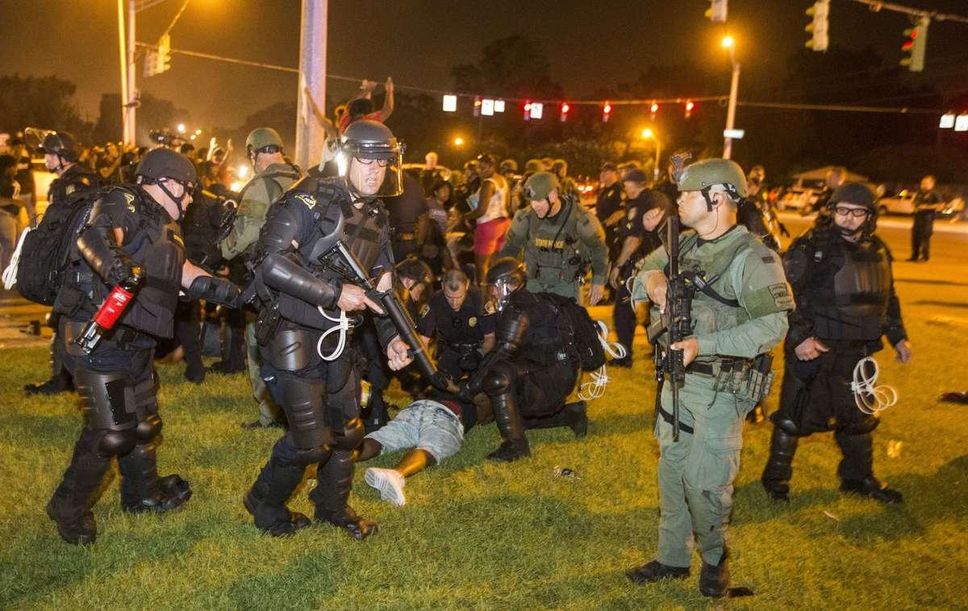 The most profound effect of the Dallas shootings is related to an important agenda in America: Racial division and the instigation of race wars. There are currently leaders in both Black and White communities who are working towards the provocation of a race war. Coincidentally or not, profound and explosive division within the population is exactly what the elite is looking for. “Divide and conquer” is the oldest strategy in the book of those in power and it remains the most effective one. A population united against a police state is bad for the elite. A population divided against itself around issues that do not concern the elite is great for the elite.

The Dallas shootings were carried out by a man who was “institutionalized” by the military system. His story and actions are symptomatic of an MK Delta slave, programmed to carry out strategic killings on behalf of the elite and to take the ultimate fall for it. This occurred only blocks away from the JFK shooting site which was also blamed on a patsy who took the ultimate fall.

We may never know the full story, but the truth remains the same. The attack attributed to Micah Johnson is perfectly in line with the elite’s goals: It has justified more police state action while swiftly advancing an even more brutal component of the agenda: Race wars.