The Department of Homeland Security (DHS) is looking to buy over 1.6 billion rounds of ammunition in the next four years for “law enforcement and training purposes”. The purchase of this outrageous amount of ammunition (about 5 bullets for each and every American) is causing many observers to worry about the direction of law enforcement in the United States .

According to a Forbes article entitled 1.6 Billion Rounds Of Ammo For Homeland Security? It’s Time For A National Conversation:

“Some of this purchase order is for hollow-point rounds, forbidden by international law for use in war, along with a frightening amount specialized for snipers.”

The article also points out that:

“At the height of the Iraq War the Army was expending less than 6 million rounds a month. Therefore 1.6 billion rounds would be enough to sustain a hot war for 20+ years.  In America.”

Yes, 1.6 billion rounds is enough to sustain a war in America for more than 20 years. And all of this ammunition will go to law enforcement –  to be used in America, against Americans.

Relevant fact: While 1.6 billion rounds are being purchased by the DHS, gun shops across America are reporting a “massive ammunition shortage” – meaning that it is becoming increasingly difficult for Americans to purchase guns and ammo . In short, in this post-Sandy Hook era, the general population is being stripped of its weapons while the U.S. Government is stockpiling an incredible amount of it. There’s a noticeable shift going on here.

The above Forbes article also reports that the DHS acquired armored vehicles that were used in Iraq and Afghanistan to be used in U.S. streets. They are already being spotted in some American cities. These war vehicles are designed “to withstand IEDs, mine blasts, and 50 caliber hits to bullet-proof glass”. Furthermore, they have gun ports, which mean that people in the tanks can shoot at people outside. Are those really needed for “law enforcement” against American people? 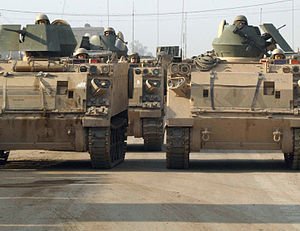 Also, do not forget that drones are now allowed in U.S. skies (something that was covered on VC over a year ago) and that they have the capability to kill people. Knowing all of this, is there still any doubt that there’s a definite effort to militarize law enforcement and to turn the United States into an all-out police state?

FacebookTwitterSubscribe
Related Topics:dhspolice state
Up Next

Nicole Sherzinger: “To make it, you really have to sell your soul to the devil.”

Why is Queen Elizabeth’s Nurse Wearing a Masonic Belt?