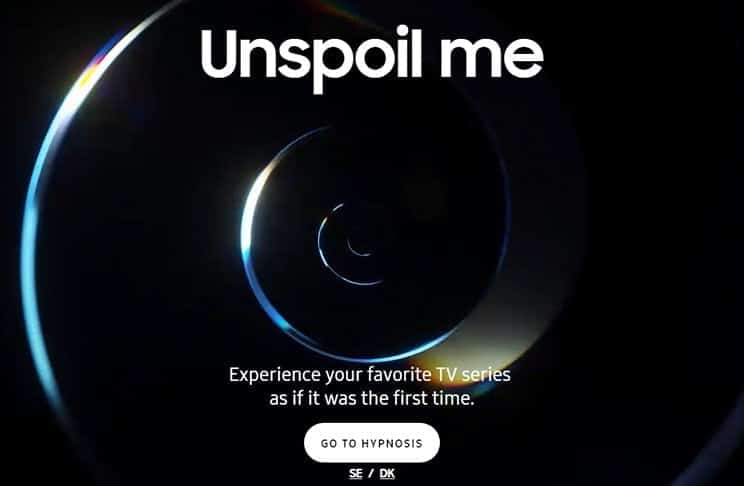 “Unspoil Me” claims it can “erase the memory” of a TV show you’ve watched, allowing you to watch it again for the first time.

Did you ever tell yourself: “I wish there was a corporate website that could hypnotize me and erase part of memory”? If so, what is wrong with you? Also, you’re in luck.

Samsung’s Swedish site includes a bizarre feature called Unspoil Me – a 23-minute hypnosis session comprised of swirling patterns, mesmerizing music and a hypnotherapist controlling your mind. The aim is to get your brain to forget your favorite TV show in order for you to watch it again – as if it was the first time.

No, this is not a joke. The firm actually seems pretty serious about this. The session was created by certified hypnotists Ulf Sandström and Fredrik Praesto. Before starting, the site asks participants to consent to some terms and conditions including the following:

4. I am aware that the experience (self hypnosis) could have real effects and I am prepared to forget the whole, or parts of my favorite TV series.

5. I ensure my sole purpose of using Unspoil Me is for its intended purpose, and I will therefore only think about a film clip or a tv-series which I will have the possibility to forget.

The tool also requires participants to put on headphones, to isolate themselves in a tranquil place and to watch the entire thing without interruption. It also recommends a night’s sleep before re-watching the “erased” TV show.

The site is not joking around about this.

When the session begins, hypnotic patterns swirl on screen as the hypnotist introduces himself. The vibe is very creepy and the fact that the guy sounds like a James Bond villain does NOT help. Then, the music starts and the hypnotist asks the listener to focus on the swirling pattern.

Then, one must count backward from 300 as the hypnotist keeps repeating about going to a “deeper place”. At one point, one must envision a set of 10 stairs going down to an even “deeper place”. The hypnotist then asks the participant to walk down the stairs as he tells a story about an emperor and a mathematician. There’s lots neuro-linguistic programming going on there.

In the end, the hypnotist claims that the show will become a “small fuzzy image” in the subject’s mind. He also adds that, during the next night’s sleep, one of the listener’s dreams will “install” everything that was done during the session.

Nowadays, major tech companies are not satisfied with selling products to customers. They need to be able to spy on them, to collect their data and, if possible, to control their minds and thoughts. While this hypnosis site might be a bizarre marketing ploy to sell TVs, it nevertheless reflects the mindstate of these tech giants.

One needs to be very trusting to subject themselves to a corporate-sponsored hypnosis session. Who knows what other messages might be embedded in there? But the creepiness doesn’t stop here.

In real life, electroshock therapy is used to erase “bad memories” from subjects’ minds in order to treat depression and PTSD. In darker circles, hypnosis and electroshock are used to erase, distort and to re-create the memories of victims who underwent severe trauma – an important step of mind control.

Considering this fact, the name of the hypnosis site – Unspoil Me – is rather disturbing. Yes, it alludes to the fact that it “erases” TV show spoilers. But it also alludes to the dark truth of memory erasing techniques: It is about “unspoiling” the minds of those who were “spoiled” by crimes, trauma, and abuse.

So did the hypnosis work? I don’t know. Do you think I’d subject myself to this crap? One thing I do know is that I NEED TO BUY A BRAND NEW SAMSUNG TV RIGHT NOW.

Related Topics:new technologies
Up Next