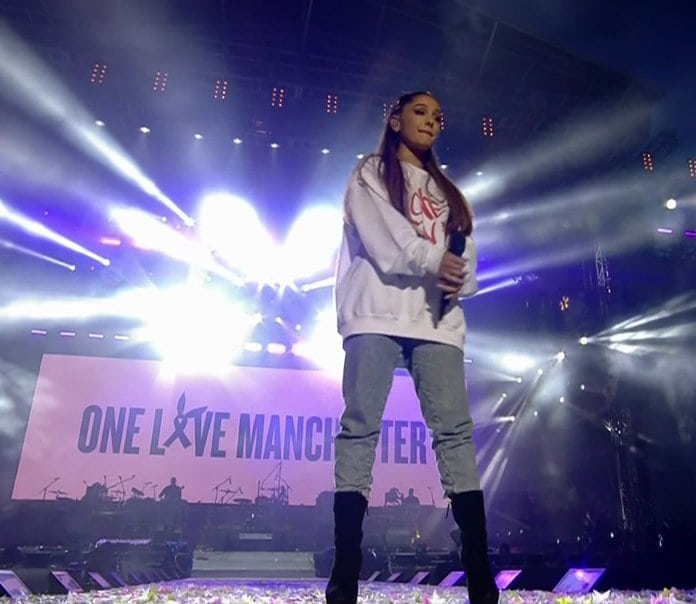 The Manchester Terror Attack took place at a concert for Ariana Grande – an music industry superstar. It was a grand and horrifying clash of the worlds of entertainment and high-stakes terrorism.

The Manchester terror attack was sickening for several reasons. Its aftermath was also sickening, for a slew of other reasons. It was about forcing horror on children, killing dozens of them and shattering whatever wonder and innocence that was left in the survivors. It was about mixing the worlds of song, dance, and entertainment with fear, death, and horror.

On May 22, 2017, a suicide bombing occurred in the UK, immediately following a concert by Ariana Grande at Manchester Arena. Twenty-three adults and children were killed, and 119 were injured, 23 critically. ISIS claimed responsibility for the attack.

Before I go any further, it is necessary to explain the underlying nature of ISIS. Contrary to appearances, it is not an enemy of the world elite. In fact, the emergence of ISIS was “facilitated” by the powers that be.

In 2014, I published an article entitled ISIS: A CIA Creation to Justify War Abroad and Repression at Home; it is still relevant today. “ISIS” is continuously used to destabilize governments hostile to the elite, while facelessly causing fear, panic, and terror in major cities.

The elite agenda is rooted in fear, panic, and terror. Such emotion is a golden currency, an invaluable asset that can be used to shape and mold society with little to no resistance.

The number of terror attacks and deaths blamed on ISIS is staggering and is becoming, sadly, a “new normal”. Places of fun, leisure, tourism, and entertainment are being turned into sites of carnage. And, of course, after each event, no concrete plan or solution is ever proposed. It is almost as if they want modern society to accept the notion that it is “normal” for any person to be randomly killed at any time, for no particular reason.

Is there any mainstream discussion about the problems that are the root cause of ISIS and concrete ways to solve them? Rarely. However, a bunch of “satellite issues” are often brought up – ones that were clearly on the elite’s agenda for years, simply waiting for the next terror attack to bring them about.

Here’s what Theresa May had to say in the wake of the Manchester attack:

A headline from the Independent.

Apparently, terror needs to be contained through the regulation of the internet. May stated:

“We cannot allow this ideology the safe space it needs to breed – yet that is precisely what the internet, and the big companies that provide internet-based services provide,” Ms May said.

“We need to work with allied democratic governments to reach international agreements to regulate cyberspace to prevent the spread of extremist and terrorism planning.”

The response to each terror attack is one more incremental step towards an all-out, highly monitored police state that represses all of its citizens. The only response to terror society is capable of, it would seem, restricting the basic rights of privacy, free speech, and democracy of ALL citizens. It is never about understanding the root of it all … because then things get real. And the elite don’t like when people get real. They want people to be afraid while listening to Ariana Grande.

The Manchester bombing took place in a setting with heavy symbolic value. It occurred during a show by an industry superstar who is particularly loved by children: Ariana Grande. And, in case you haven’t read other articles on this site, she is a tool of the elite – not unlike ISIS. However, Grande works in the elite’s “entertainment” department. Through the handful of media conglomerates who sign and promote a select group of stars, the elite uses this system to shape and mold the masses – especially the youngest and most impressionable – to adopt specific ideas, values, and attitudes.

Ariana Grande has been part of the system since she was a young teenager who played the role of “Cat Valentine” in the Nickelodeon show Victorious. This role led her “teen idol” status, a platform that was then used to launch her singing career.

Not unlike other teen idols, Grande’s solo career coincided with a drastic image change. She quickly became a figurehead of the “Sex Kitten” agenda used to expose children to sexual imagery at a young age.

Since the launch of her singing career, ‘cat ears’ became part of Grande’s trademark look. 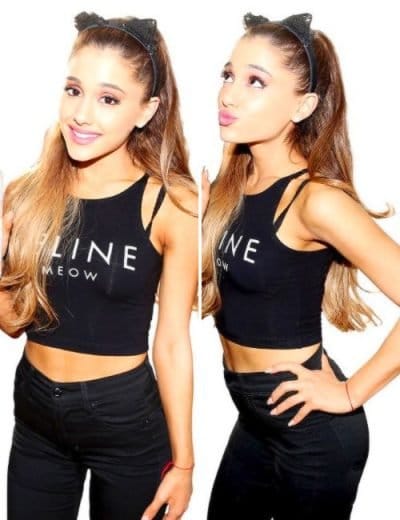 Everything about her is cat related. 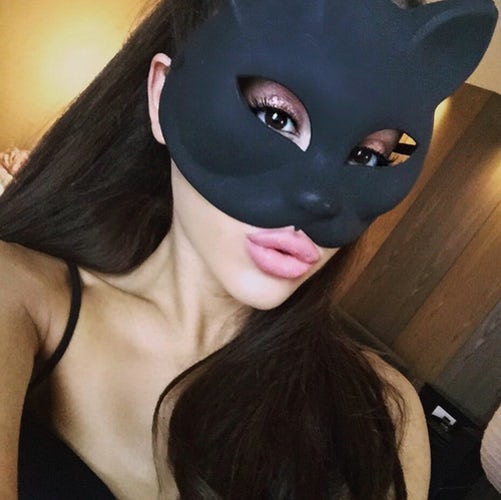 Grande is often dressed innocently in accessories that could be used in the elite’s “Eyes Wide Shut” parties where Beta Kittens are involved. 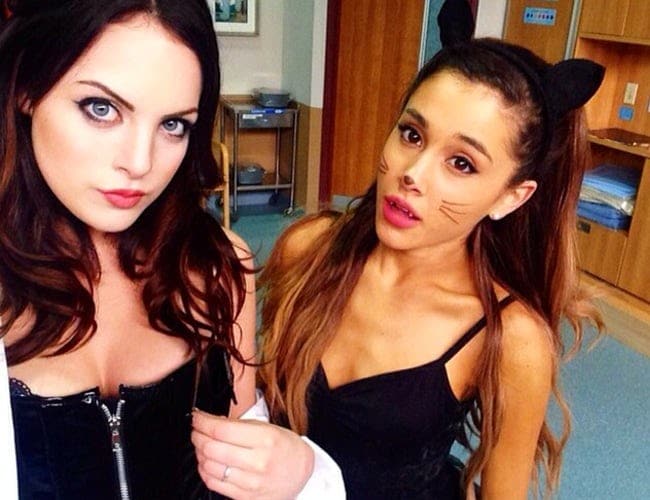 Throughout her career, Grande has been told to flash the one-eye sign in photoshoots, confirming that she’s part of the elite’s system. 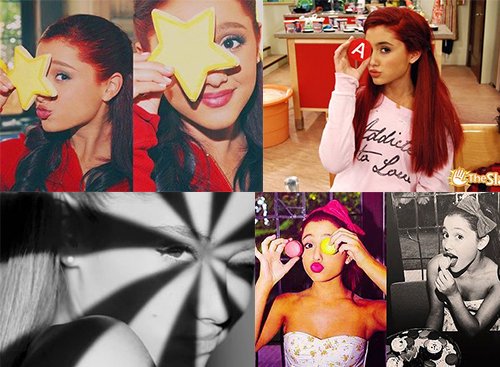 From Cat Valentine to Ariana Grande: All about the one-eye sign from early on. 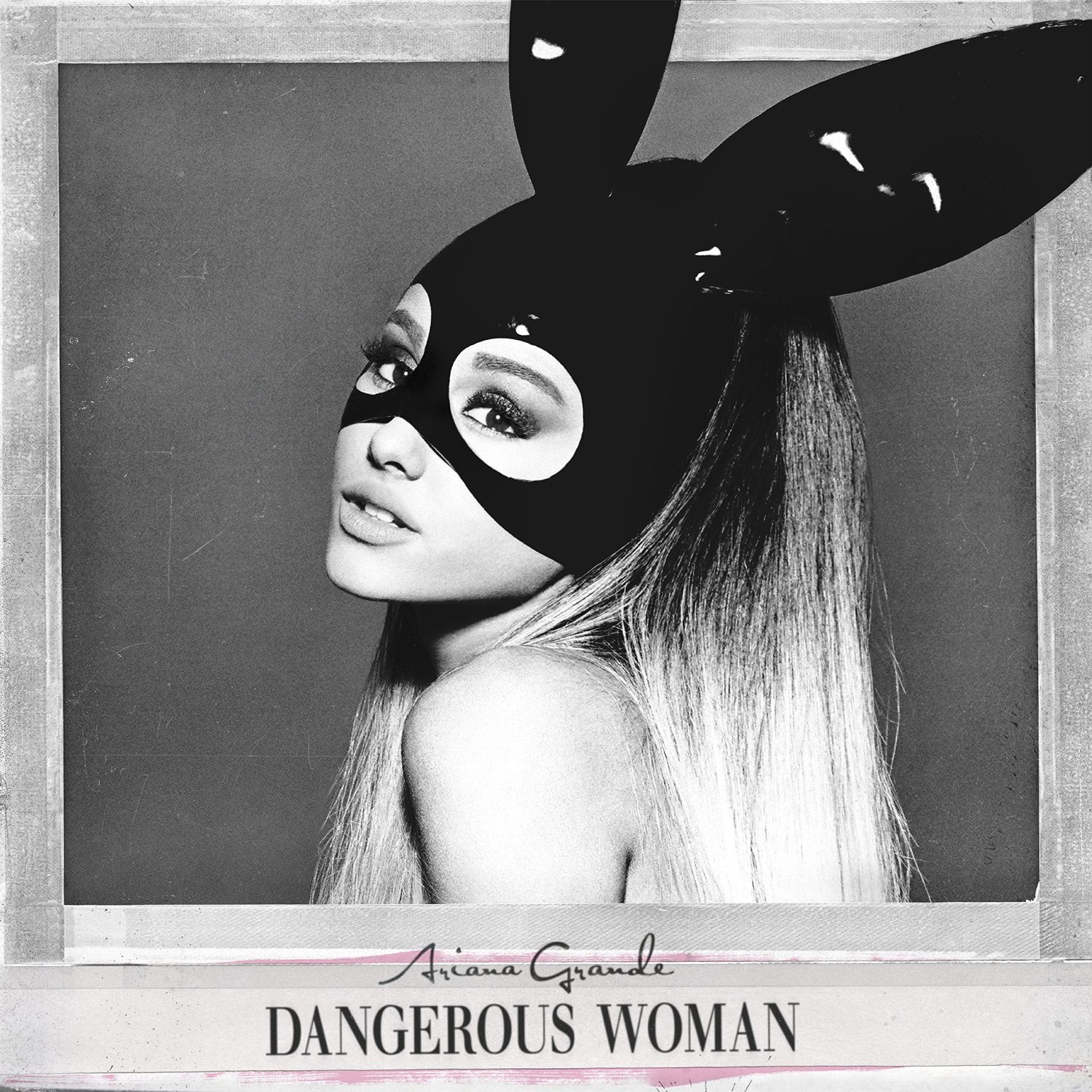 If one analyzes the grand scheme of things, what happened in Manchester is deeply disturbing. Thousands of young people, hooked by the intense marketing machine behind Ariana Grande, were lured into a packed arena. A bomb then exploded, killing and injuring children, violently colliding the worlds of elite entertainment with elite terrorism, forcing an entire generation to face unspeakable evil and horror.

There is something disturbingly prophetic about this picture.

If, in the past, the youngest members of Western society could avoid the constant flow of depressing, terror-related news by focusing on entertainment, that era is now clearly over.

In response to the attack, on June 4th, Ariana Grande headlined One Love Manchester, a benefit concert for the victims of the attack. The show also featured Miley Cyrus, Katy Perry and Justin Bieber. These artists each share at least two things in common. First, their target market is children and teens. Second, they’re all fully part of the occult elite industry and their entire catalogs are drenched in its symbolism. Everything about them refers to the dark side of mind control and cryptically refers to trauma, abuse, and occult rituals. 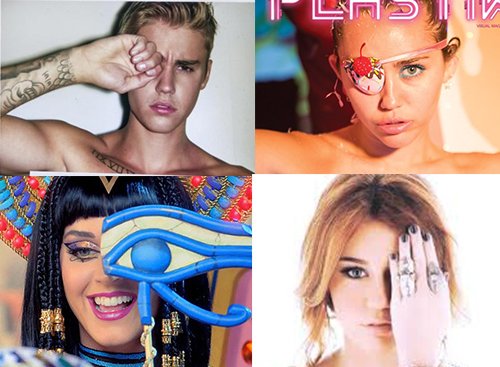 Not unlike Grande, Bieber, Cyrus and Perry are not strangers to the one-eye sign. On a deeper level, they’ve all fully embodied the roles of MK slaves at the mercy of the elite.

These were the stars chosen to “respond” to terror and to uplift the masses. On a wider scale, they represent the mainstream opposition to ISIS. If you don’t like ISIS and terror, you are told you need to embrace these pawns of the occult elite’s industry. They are the answer. 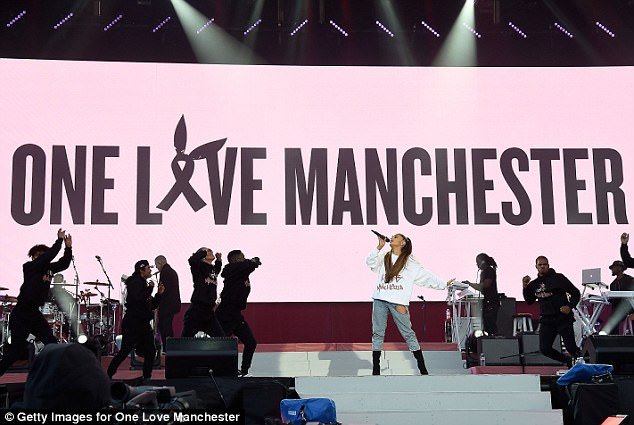 Appropriately enough, the concert finished with Ariana Grande singing Somewhere Over the Rainbow – the classic 1939 song written for the movie The Wizard of Oz.

In the world of Monarch Programming, “over the rainbow” is a code of dissociation. The movie The Wizard of Oz has been used as an MK ULTRA programming script for decades and the song is used to induce dissociation. The fact that this song is used at the end of a concert for children headlined by representatives of the MK system is rather telling.

“Over the rainbow in Oz is for the Monarch slave to be in a trance, and into a certain area of the programming. To be fluctuating at both ends as an observer and not a participant or to go to the other extreme and become a participant.

The theme song of the movie goes, “Somewhere over the Rainbow…there’s a land where the dreams that you dare to dream really come true.” These lyrics are a method to hypnotically confuse the brain to perceive that the “over the Rainbow experience” (which is usually horrible abuse) is a “dream”. The dissociative mind is only too happy to call the trauma a dream, which is lived as a reality for a moment, but is nevertheless recorded by the mind as a fantasy.

The term for this is cryptoamnesia, which means the process where the proper functioning of memory is hypnotically messed up. The slave’s internal world becomes “reality” and the external real world becomes the Land of Oz which is perceived as make-believe.”
– Fritz Springmeier, The Formula to Create an Undetectable Mind Control Slave

The same way that mind-control slaves are exposed to intense trauma to induce dissociation, the masses are exposed to trauma through terror to the point of numbness … and then are told to “go over the rainbow”. The fear of “terror” is its own black magic, and it can be used to contaminate minds, debase the soul, and, as we continue to see, to disrupt society. The waves of shock and grief it generates quickly become part of the “psychosphere” and end up defining an entire generation. They feed off of death, despair, and distress, and they seek to poison all aspects of society with it. Do not let them contaminate your mind and don’t be fooled by their “dangerous” men or women.

The Texas Church Shooting Was Eerily Foreshadowed in Mass Media