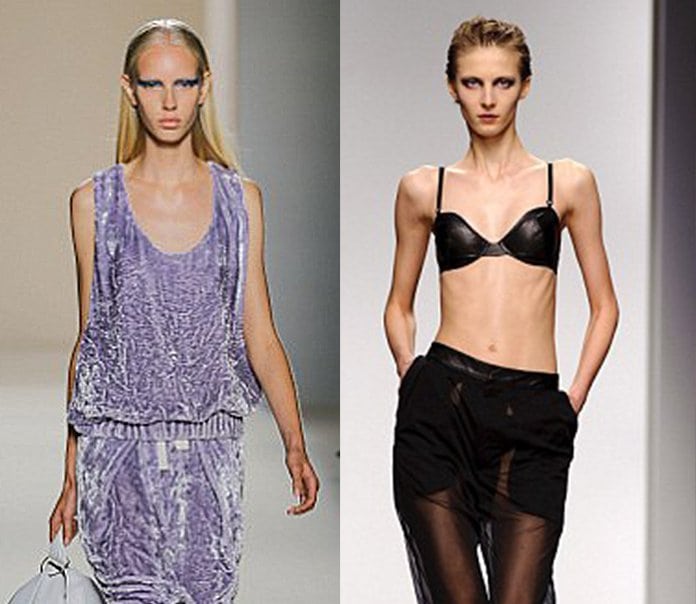 After years of silence, models are speaking out against the sadistic behavior of people in the fashion industry where abuse, exploitation, and even torture is rampant. And that is only the tip of the iceberg.

In my series of articles Symbolic Pics of the Month, I often feature fashion photoshoots where abuse and violence are celebrated and even glamorized. This abuse is however not only for the cameras – it also happens behind the scenes, for real. Indeed, the disturbing photoshoots that are often published by major magazines are symptomatic of an industry that is diseased to the core with a mindset that is bent on dehumanization and human exploitation.

A recent article in the Daily Mail detailed several accounts from people in the industry who witnessed or were subjected to sadistic treatment.

“Catwalk casting agent and industry veteran James Scully, who has worked with designers Stella McCartney and Tom Ford, fiercely criticised Balenciaga in a shocking post on the photo-sharing social network Instagram in which he accused the label’s casting directors of treating girls like cattle at a meat market.

‘I was very disturbed to hear from a number of girls this morning that… they made more than 150 girls wait in a stairwell, told them they would have to stay over three hours to be seen and not to leave,’ he wrote.
‘In their usual fashion, they shut the door, went to lunch and turned off the lights to the stairs, leaving every girl with only the lights of their phones to see.
‘Not only was this sadistic and cruel, it was dangerous, and left more than a few of the girls I spoke with traumatised . . . They refuse to be treated like animals.’

Scully accused another fashion house, which he didn’t name, of trying to ‘sneak in’ 15-year-old models (the minimum legal age is 16) to its show, adding: ‘Too many of these models are under the age of 18 and clearly not equipped to be here.’

His claims sent shockwaves through the modelling world.”
– Daily Mail, Sadism on the catwalk: Locked in the dark for hours, starved and preyed on… here, models reveal the ugly truth behind fashion’s glittering façade

British model and Vogue cover girl Edie Campbell, 26 explained that this kind of treatment is common in the fashion world.

‘It’s also probably not the most shocking example I’ve heard,’ she said. ‘I have witnessed a lot of upsetting things. I’ve seen girls be told to run laps around the studio.’
‘The problem with fashion is that it is a very informal industry. Boundaries are crossed and it allows people to behave in ways that would not ever be accepted in any other ‘work’ environment. Because the girls are desperate for work then they are easily exploited.

‘It is also a closed system. If you speak out, you are faced with the threat of never working again. And that is why what James is doing is so brave and should be applauded.’
– Ibid.

Other models stated that sexual abuse is also a major problem in the industry … and industry that is full of underage models.

“Leading British models have revealed they regularly suffer degrading and humiliating treatment at the hands of casting directors, agencies and photographers.

While some recount emotional manipulation and bullying, others claim to have endured physical and even sexual abuse at work.

Among the horror stories are the model who was drawn on with a permanent marker to show which parts of her body were ‘fat’; the model who was made to run around a studio in stiletto heels until she collapsed; the hopefuls kept in a room for ten hours with no food or water; the models who had their hair hacked off without their consent.

Then there’s the appalling story of the model who has permanently lost feeling in her toes after being made to stand all day in shoes that were too small.

“I’ve had chunks of my hair cut off without being asked if it would be OK,’ she explains. ‘I’ve been stabbed with needles and pins; my skin has been cut and pulled by clips.

‘I’ve been to castings in London where there are hundreds of models and only a handful of chairs provided. Sometimes there will be a water dispenser or vending machine, but often there is nothing.

‘I’ve been on shoots for up to ten hours where no food is provided. The underlying message is always that you shouldn’t eat.’

One of her worst experiences came in 2014 at a major UK modelling agency — which she won’t name — where Rosalie, a size 8, was told to lose weight if she wanted work.

‘I did exactly that and lost over ten kilograms and two inches off my hips,’ she says. ‘When I returned to see this agency, they said I was making progress but they wanted me to “get down to the bone”. ‘I couldn’t imagine becoming any thinner. I felt physically and emotionally drained. ‘If I had been younger and more naïve, I might have pushed myself too far and caused more harm.’

Speaking on condition of anonymity, other UK models claim they have been: Locked in rooms at auditions and castings, on one occasion for three hours; forced to work until they were so exhausted they fainted; and ‘fat-shamed’ by agents who refused to call them by name.

When one group of models, weak after several hours without food or water, ordered a pizza to the studio where they were auditioning, the casting director called them ‘pigs’ and sent them home.”
– Ibid.

Other models also denounced the abusive behavior of photographers.

“London-based model Rosalie Nelson, 25, has been modelling for six years and says she’s lost count of the times she’s faced abuse. She attended a photoshoot at his London studio in 2011, during which the photographer asked her a series of lewd and increasingly personal questions.

‘He walked towards me with the camera repeatedly saying, ‘you are vulnerable, you are very vulnerable’, until he was right up to me,’ Roswell recalls.
‘I continued with the shoot as he had not touched me. We moved on to lingerie, where he repeatedly pushed [me] before standing above me with his crotch in my face.
‘I got to my feet and dressed . . . As I walked out of the shoot, feeling numb and shaken, he forced me into a hug.’

An astonishing 30 per cent of models report being touched inappropriately at work, while 28 per cent say they have been pressured to have sex with someone at work.
In no other industry would behaviour like this — and the behind-the-scenes horror stories — be so commonplace.”
– Ibid.

The problem is that the fashion industry is not a typical workplace. It is an informal social bubble that is ruled by people connected to the occult elite. The movie The Neon Demon (analyzed in this article) reveals how the fashion world’s mindset takes roots in its shadowy and occult underworld where abuse, mind control, child exploitation and bizarre rituals take place. What has been “revealed” by the above article is only the tip of the iceberg. It is symptomatic of a system that is diseased to the core.

Discuss this article at the Vigilant Citizen Forums.

Related Topics:fashion world
Up Next

Facebook is Working on a Smartphone That Can Read Thoughts