A video of the US National Anthem reportedly broadcast during the 1960s was found to contain creepy subliminal messages about “obeying the government”. Is the video authentic or is it a well-crafted hoax?

Back in the good ol’ days, TV stations ended their broadcast day with a goodnight message and the national anthem, complete with a montage of patriotic images. While many of us have somewhat fond and nostalgic memories of these TV sign-offs, one Star Spangled Banner video said to be broadcast during the 1960s was apparently laced with creepy subliminal messages. Here it is :

The messages found in the video are:

The goal of subliminal perception is to flash messages on screen quickly enough to cause the subconscious mind to record them without even being perceived and analyzed by the conscious mind.

“Subliminal perception is a deliberate process created by communications technicians, by which you receive and respond to information and instructions without being consciously aware of the instructions”
– Steve Jacobson, Mind Control in the United States

Do subliminal messages actually work? Older studies claimed that they do not work, which lead the general public to dismiss the entire theory. However, recent studies found that, in some cases, subliminal perception produces conclusive results (this page contains several links to studies on the subject). One thing is for sure, the technique is still used today (see my article, Mind Control Theories and Techniques used by Mass Media,for some examples).

In the context of the national anthem video, debating whether or not subliminal messages work should not be even an issue. Discrediting the video because “subliminal messages are BS” is not a valid argument. It is the intent behind the message that counts.

Some of the phrases flashed during that video appear to be taken out of the movie They Live (see my article about it here), such as OBEY and CONSUME. While some argue that these lines are too “conspiracy-kitsch” to be taken seriously, they are the kinds of words a government bent on creating a consumer culture would use.

The words “BUY ULTRA” and “BUY NAOMI” also appear a few times. These lines appear to refer to MKULTRA and MKNAOMI, two secret CIA projects that were active at the time – but unknown to the public. MKULTRA studied mind control and MKNAOMI was about biological warfare (these projects still exist today and are infinitely more sophisticated).

Considering the social and political context of United States during the 1960s, which was characterized by Cold War paranoia, political assassinations, rebellious youth movements and dabblings with mind control – the existence of such a video is plausible. If the US government admitted to drugging and conducting horrendous experiments on thousands of people via the MKULTRA studies, why wouldn’t it attempt to manipulate minds using this powerful invention called the television?

But is there proof that this subliminal video was actually broadcast on television? Or were the messages injected by a funny-pants computer wiz in 2009 as a hoax? A few internet sites and message boards have debated these possibilities, but I have yet to come across conclusive evidence proving one side or another. Those who believe that the video is authentic cannot find another video source except a single YouTube video; those who believe that the video is a hoax often rely on arguments that are false or inconclusive.

The original video was uploaded in 2009 by a YouTube user named Naomi19631963. The user provided a short description of the video – it DOES NOT mention the subliminal messaging.

I salvaged this reel of film from a TV station that used to sign of with it during the 1960s.

The uploader later posted a comment stating that the video was salvaged from Alabama and that it was probably broadcast in several states. The uploader did not post anything else, ever.

It is only about two years after the original upload that someone discovered the subliminal messages. The video was then mentioned on larger websites, such as Infowars in 2013. In all of the discussions, many claim that the video is “fake” or “doctored” using arguments that are sometimes valid, but sometimes false. Here are some of these arguments.

The username of the uploader is Naomi19631963. Coincidentally enough, a subliminal line from the video is “BUY NAOMI”. This is perceived as proof that the original uploader knew about the messages (and maybe inserted the messages themselves), but wanted to go for the “found by accident” effect. This is indeed a possibility, but it is not conclusive proof that the video is “fake”. According to the YouTuber who first posted a slowed down version of the video :

the original uploader is not a regular youtuber, but salvaged this from an old reel he found in Alabama (see his comment). The old reel probably had written on it somewhere “NAOMI 1963” or something similar, and when he uploaded it onto youtube, he simply used that as his youtube name. He never once indicated he was aware of anything out of the ordinary in this film.

The name of the original uploader is therefore indeed suspicious, but it is not proof that the video is fake.

Was This National Anthem Ever Broadcast?

Others who claim the video is a hoax argue that this sign-off video either never actually existed, that it was created from scratch, or that the on-screen text was added by the hoaxer. All of these claims are false. This national anthem video was indeed broadcast on television for several years. The site Fuzzy Memories currently hosts at least two sign-off videos from the 1980’s (recorded from the Chicago TV station WMAQ Channel 5) that end with this same national anthem. There is however one important difference : There are no subliminal messages. (This one is from 1981).

This has lead deniers to claim that the hoaxer used this 1981 video as a source to add subliminal messages using computer software. A simple comparison of both videos however reveals that this is impossible, for a couple of reasons. First, the “subliminal” video has a wider field of view than the 1981 version. 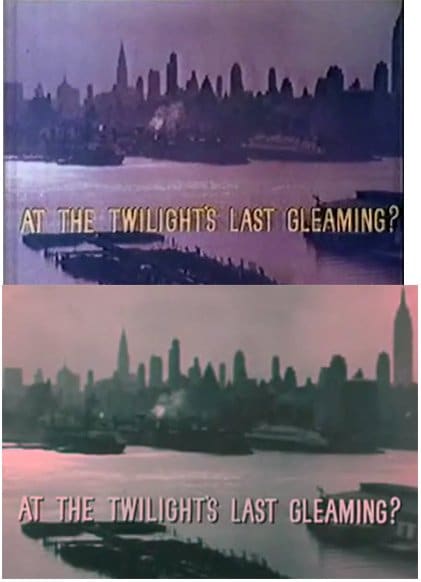 Another important difference is the color of the text and the shadow underneath the text. In the 1981 version, the text is yellow and the shadow projects at the top-left of the letters. On the subliminal video, the shadow goes towards the bottom right. This not only demonstrates that the 1981 was not the source of the hoax, but that at least two totally different versions of the same national anthem video were created. The 1981 version was formatted for TV screens with a 4:3 aspect ratio. The text was redone in yellow – and without the subliminal messages. Is it possible that the subliminal messages were removed from the 1980’s “refresh” of the anthem due to the advent of VCRs, which gave viewers the opportunity to record TV footage … and discover the hidden messages?

The crossbar on the letter A in the subliminal message (left) is lower than the A from the lyrics.

Does this prove that the video is a hoax? Not really. Before the advent of computer graphics, text was overlaid on video footage by hand using green screens. The sequences were then shot in stop motion, frame by frame, as technicians moved objects around after each shot. Under intense scrutiny, it is therefore easy to find differences and inconsistencies in text found on older films. If one closely observes the letters for the national anthem lyrics, some differences can also be noted.

If one overlooks these differences, one must admit that the text of the subliminal message blends perfectly with the words of the national anthem. If a hoaxer added these words using computer software such as After Effects, this person did an amazing job to make the added text look as “old” as the original text. The subliminal text is not crisper or more “digital” as the the anthem lyrics. The subliminal text has the exact same amount of “blurriness” due to the age of the video. Furthermore, if you look at the word “real” on the above image, the alleged hoaxer even took the the time to misalign some letters to add an old-school, “manual” effect to it all. If the hoaxer had such amazing computer skills, didn’t he have the tools to exactly replicate the original font?

There is still not enough data to prove that the video is authentic, but there is also not enough data to prove that it is a hoax. However, the observations in this article allows us to advance several important facts. First, the uploader of the subliminal anthem (whether it is a hoax or not) had access to a video that was never seen online before. Since it does not appear to be recorded using a VCR, it is most likely an actual film reel that has been digitized. Second, there are at least two different versions of this national anthem video. The version broadcast in the 1980s had the same video footage, but differently formatted text. Third, some letters in the subliminal messages differ from those in the national anthem lyrics. However, the overall texture and disposition of the words in the subliminal messages are consistent with 1960’s video-editing techniques.

So, in order to truly get to the bottom of this story, we need to see another video source of the subliminal video. It might be sitting in a library or an archive somewhere, waiting to be discovered. I am therefore calling on vigilant citizens across the US (especially around Alabama) to look for additional copies or versions of this video. It will either allow us to put an end to a clever hoax … or to shine a light on an important piece of secret American history.

The Simpsons’ Clip About a “Cat Flu” Was Incredibly Prophetic

“Illuminati” by Lil Pump: Yeah, This Is What the Music Industry Has Sunken To

The True Agenda of the WHO: A New World Order Modeled After China