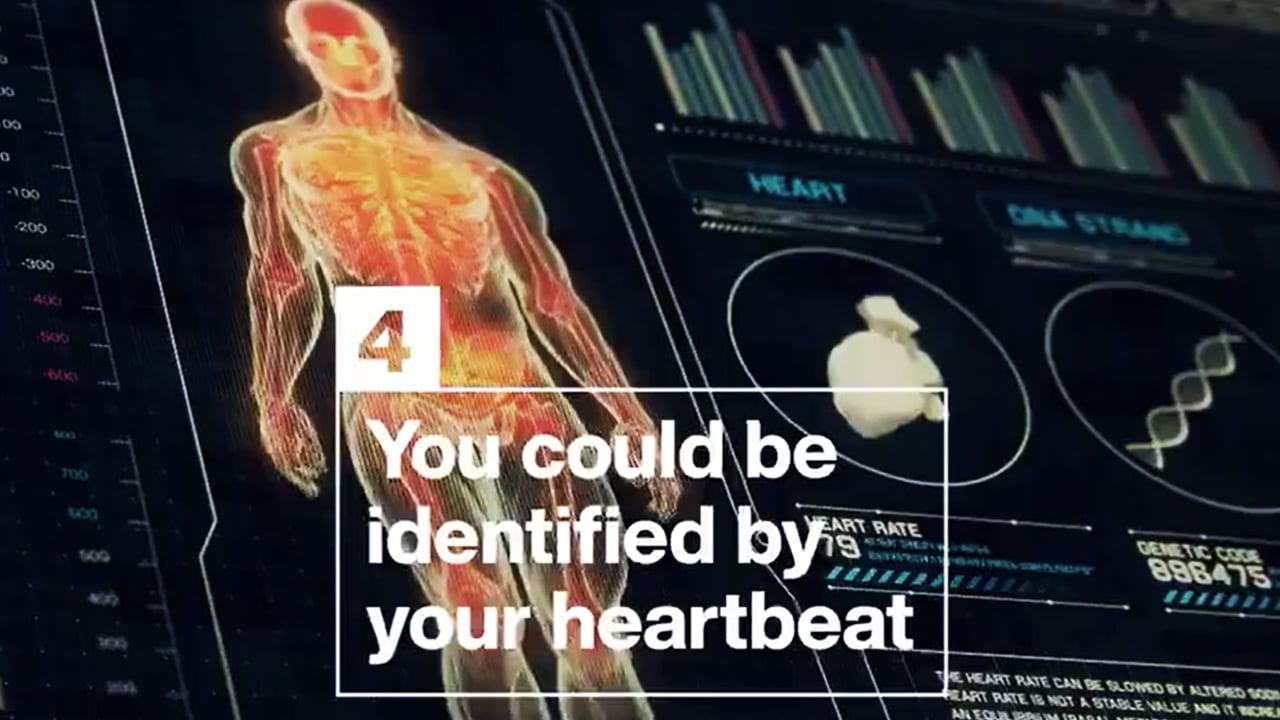 As you probably know, since 2020, this pandemic has poisoned the lives of billions of individuals across the world. Meanwhile, the World Economic Forum (WEF) cannot contain its excitement. Indeed, this powerful, influential, elite-owned organization keeps posting bizarrely upbeat videos about the “advantages” and “opportunities” of COVID-19.

For instance, in January, the WEF posted a video titled “What is the Great Reset” which basically acknowledges that it’s using the pandemic to bring about a new social and economic order … while making fun of those who predicted that would happen. A month later, the WEF posted another video titled “Lockdowns Are Quietly Improving Cities Across the World” which was nothing less than insane. In fact, the WEF eventually deleted that video … but that doesn’t mean they don’t believe it.

Needless to say, people absolutely hate these videos. They are ruthlessly downvoted on YouTube and 99.85% of the comments express utter disgust. But that did stop the WEF from creating more absurdities.

On August 17th, the WEF posted a video titled “This is how our lives would soon look”. And it looks likes the trailer of a dystopian horror movie where people are treated like dehumanized cattle.

This is how our lives could soon look. 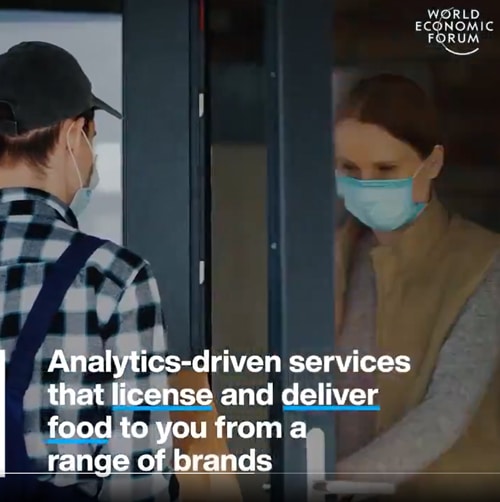 They don’t even want you to leave the house to get food. Also, they want you to wear a mask in your own house when you get that food. “Analytics-driven services” implies that big tech companies will analyze your web searches and consuming habits to “predict” what you want and have it sent to you. 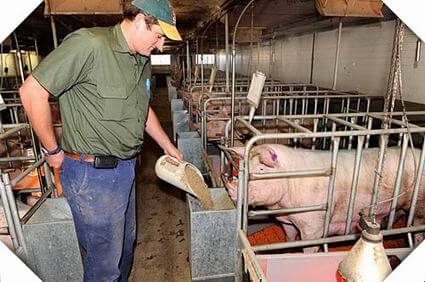 If you decide to go crazy and actually get out of the house to meet other people, they want it to be like this: 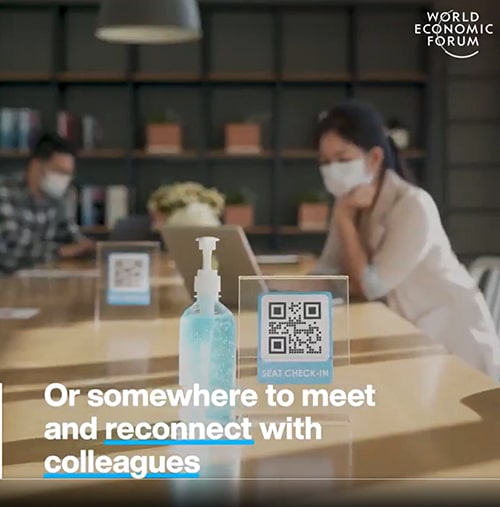 If you meet another human being, it’s going to be with hand sanitizer and permanent masks. Don’t forget to scan that QR code so they know exactly where you are and who you are meeting with.

They’ll also want to track you in the creepiest way possible. 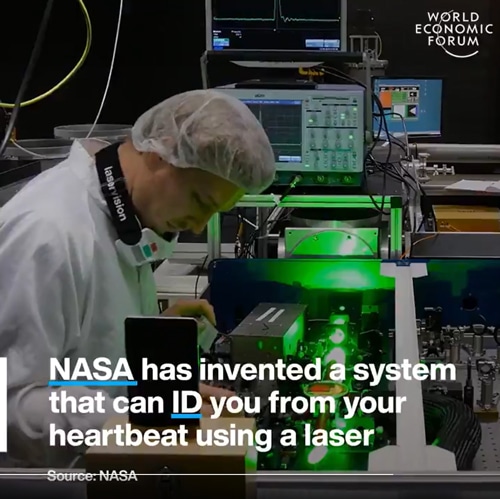 I hate every word in this sentence.

According to the WEF, masks will be a permanent thing. And, because of that, their precious face recognition systems won’t work as well. So what’s the solution? Stop with the masks because pandemics are temporary? Of course not. Stop with the tracking of individuals? Are you crazy? Their answer: Shoot lasers right at our hearts and listen to our heartbeats to ID us. Yes, that’s the most insane answer to that question and that’s what they put in their video.

These creeps are also “laser-focused” on our children. They want to shape and mold them according to their dystopian principles. For this reason, the WEF promotes permanent remote learning on screens. 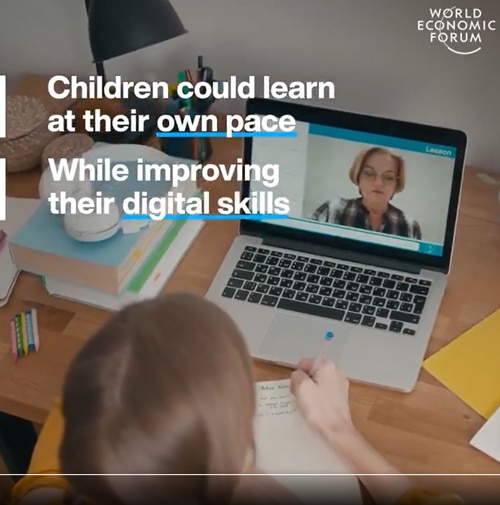 They want your children to be locked inside the house, staring at screens all day.

Although remote learning has been nothing less than disastrous for the development and mental well-being of children, the WEF wants it to become permanent. And to sell that insane idea, they claim that it would “improve their digital skills”.

That’s the weakest argument I’ve ever heard regarding anything in my life. Children today absolutely do not need to “improve their digital skills”. They learn how to use phones and tablets before they actually learn how to walk. If anything, they need to scale back their “digital skills” by a couple of notches and boost their “go outside and get dirty” skills by a couple of notches. 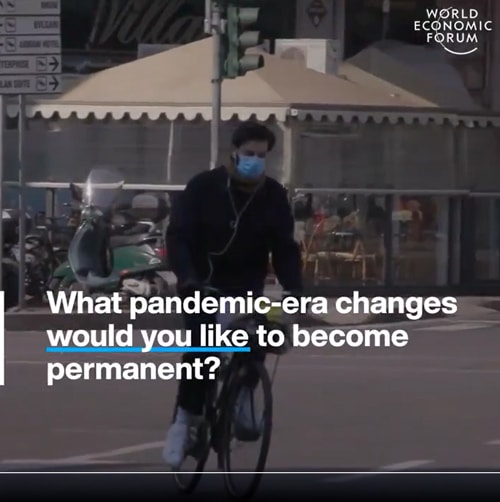 They really want COVID hysteria to be permanent.

Not unlike previous WEF videos, this one was received with universal disgust. Here are some Twitter replies to the video (I didn’t cherrypick them, they’re literally all like that). 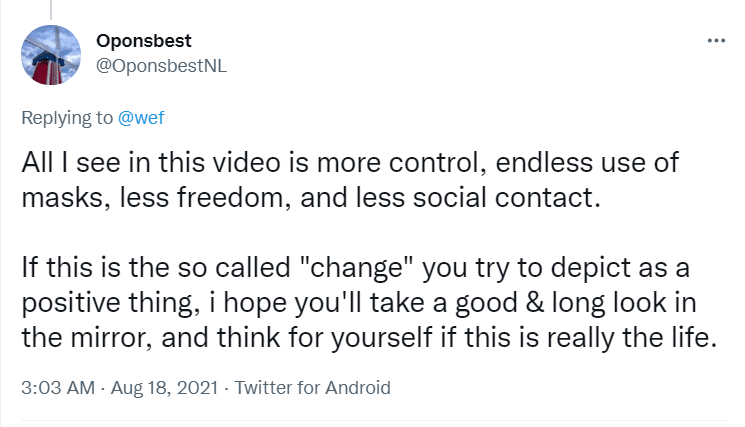 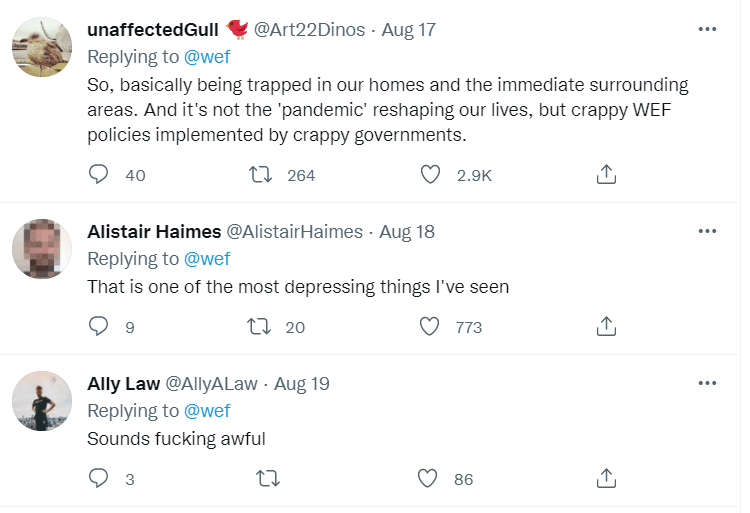 As you might have noticed, these videos aggravate me, like they aggravate nearly everyone who watches them. And for several reasons. First, who voted for any of this? Did anyone see the name of Klaus Schwab – the head of the WEF – on any election ballot? Of course not. In fact, Schwab has been working for years to dismantle national democracies.

Schwab as publisher of the World Economic Forum’s 2010 “Global Redesign” report postulates that a globalized world is best managed by a coalition of multinational corporations, governments (including through the UN system) and select civil society organizations (CSOs). It argues that governments no longer are “the overwhelmingly dominant actors on the world stage” and that “the time has come for a new stakeholder paradigm of international governance”. The WEF’s vision includes a “public-private” UN, in which certain specialized agencies would operate under joint State and non-State governance systems.

According to the Transnational Institute (TNI), the Forum is hence planning to replace a recognised democratic model with a model where a self-selected group of ‘stakeholders’ make decisions on behalf of the people.The think tank summarises that we are increasingly entering a world where gatherings such as Davos are “a silent global coup d’etat” to capture governance.
– Wikiepdia, Klaus Schwab

Second, every single WEF video unironically promotes a joyless, freedomless world where everything that makes life worth living is banned. They want you to stay in your house while they extract what they need from you using technology. They want to train your children to be the same. They don’t want you to wander too far from your home and, if you do, they want to track you on a biological level. They especially don’t want you to interact with other human beings in a normal way because that might spark some humanity in you.

Is this how you want to live? Is this the world you want your children to grow up in? If not, we need to actively reject every attempt to make their plans a reality, on every level possible.

Related Topics:coronavirusfeaturedvideoworld economic forum
Up Next

The MET 2021 Gala: Another Display of the Elite’s Insanity