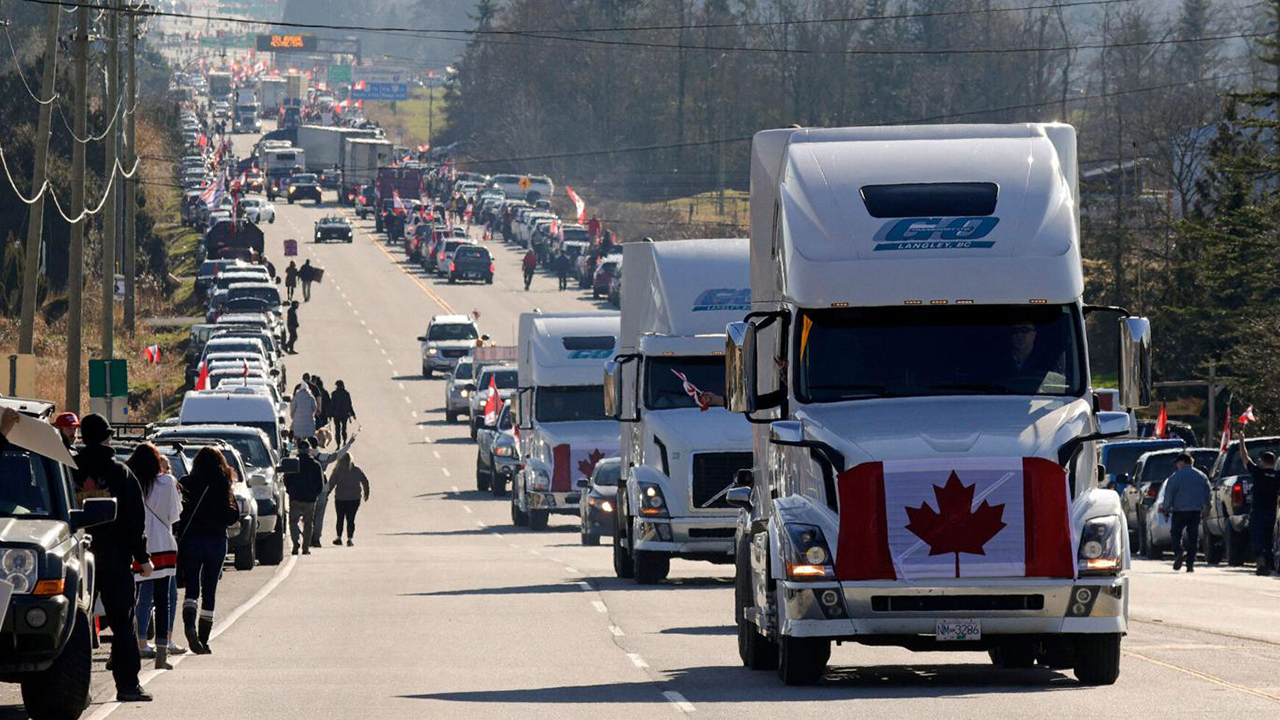 There’s something wrong and unnatural happening in Canada right now. And it could be a blueprint to what could happen in several other countries around the world. For weeks, the Canadian government has done everything in its power to turn the Freedom Convoy protests into a national crisis. Not only did the government purposely allow the situation to fester, but every single word from Trudeau’s mouth was purposely calculated to inflame the situation.

And now, instead of presenting Canadians with a plan to restore pre-COVID freedoms, Trudeau went in the exact opposite direction. He invoked – for the first time ever in Canadian history – the Emergencies Act which opens the door to all-out martial law.

Was the invocation of the Emergencies Act necessary? Nearly all observers say absolutely not. In fact, it appears that this crisis was purposefully engineered to lead to this specific outcome. The main actor in this sad episode in Canadian history? Justin Trudeau.

Controlled by the World Economic Forum

In order to understand the engine and the ideology behind Trudeau, one simply needs to view the following video where Klaus Schwab, head of the World Economic Forum (WEF), talks about “penetrating” the Trudeau government.

“What we are very proud of, is that we penetrate the global cabinets of countries with our WEF Young Global Leaders… like Trudeau”pic.twitter.com/D6odR5mqI6

In the video above, Schwab is “really proud” of controlling a “young generation” of leaders such as Trudeau. He even adds that at least half of Trudeau’s cabinet is owned by the WEF. This is not a “conspiracy theory”, this is Schwab himself telling it like it is.

In the past months, I’ve posted several articles about the WEF and its plans to use the pandemic to bring about a “Great Reset”. The WEF even posted some truly bizarre videos praising drastic lockdowns while attempting to normalize permanent pandemic measures.

When one understands that the Trudeau government is completely controlled by the WEF, his attitude and policies start making sense. Indeed, when Trudeau was first elected in 2015, he was all about “sunny ways” and uniting Canadians with a positive message. However, since the pandemic, his message took a drastic turn. It is reflective of an agenda that can be seen around the world: Turning a large portion of citizens into enemies of the state, which justifies repression against them.

Sadly, the pandemic, which is supposedly a “health crisis”, has turned into a political crisis.

Despite the fact that Canada has one of the highest vaccination rates in the world, Trudeau has been hard at work driving a wedge in the country and demonizing those who did not get vaccinated. A few months ago, Trudeau infamously called the unvaccinated “misogynists and racists”.

Of course, this was an outright lie. How can the unvaccinated be “misogynists” when half of them are women? How can they be “racists” when minorities and immigrants show the lowest vaccination rates in the country? In this toxic context, facts do not matter. It is about throwing buzzwords and creating a narrative justifying oppression.

In January of 2022, while places around the world were dropping COVID measures that were deemed outdated and unnecessary, the Trudeau government imposed a vaccine mandate to truckers going through the Canada-USA border.

It’s one of those measures that have no purpose except driving a wedge in society. How can truckers, who spend most of their time on highways, inside of trucks, be deemed a COVID threat? Furthermore, the Omicron variant proved, without the shadow of a doubt, that the current vaccines do not stop the spread of the virus. Considering these facts, one can ask: Why did the government choose to enforce this unnecessary policy? Was it a pure provocation?

So truckers responded by organizing a massive convoy that traveled the entire country to gather in Ottawa. The convoy apparently struck a nerve in COVID-exhausted Canada as it got a heroes’ welcome everywhere it went.

Seeing this massive movement gaining steam, did Trudeau attempt to nip it in the bud by opening a dialogue? No, he did the exact opposite. In an infamous press conference, Trudeau said:

“The small fringe minority of people who are on their way to Ottawa, who are holding unacceptable views that they are expressing, do not represent the views of Canadians.”

In 2020, while the country was in full lockdown, Trudeau posted a tweet thanking truckers. 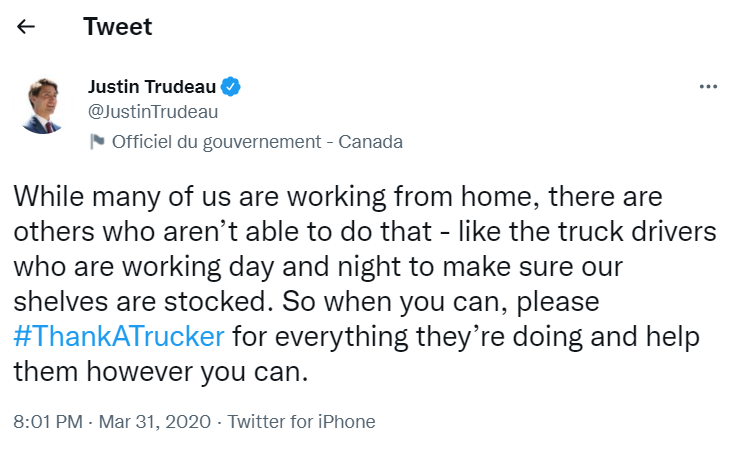 As soon as the truckers opposed one of Trudeau’s oppressive policies, they’ve turned into a “fringe minority with unacceptable views”.

When the convoy finally arrived in Ottawa, thousands upon thousands of Canadians protested peacefully against vaccine mandates and other COVID restrictions. 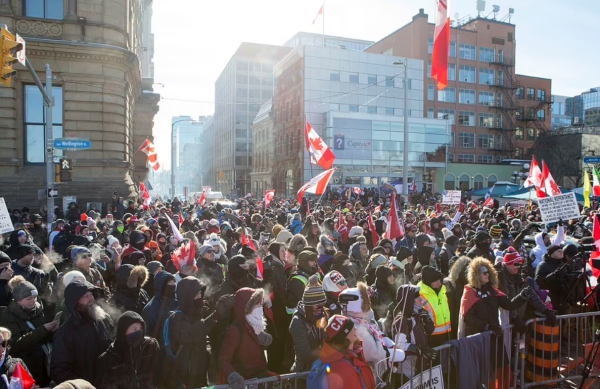 This situation could have de-escalated very easily. Trudeau could have met with the protestors. A few months prior, he literally knelt down to BLM protestors who were tearing down monuments. Even better, he could have announced the gradual lifting of contentious measures which shouldn’t even exist in the first place. These simple gestures would have diffused the situation and most protestors would have packed their things and gone home. Those who remained would have shown bad faith.

However, Trudeau did none of those things. On the day prior to the Ottawa protest, Trudeau tweeted this.

Then, he fled and went into hiding to an “undisclosed location” for several days.

Meanwhile, media outlets (which are owned by the same globalist forces that own Trudeau) did everything in their power to demonize the protestors. As usual, the words “racist” and “white supremacist” were thrown freely, despite the fact that a great number of protestors were minorities and immigrants. Once again, facts did not matter. It was about pushing a narrative.

In short, the powers that be wanted the situation to escalate and they wanted protestors to radicalize by needlessly provoking them.

This bizarre attitude caused members of Trudeau’s own government to criticize its actions. Joel Lightbound, a member of Trudeau’s cabinet stated:

“I can’t help but notice with regret that both the tone and the policies of my government have changed drastically since the last election campaign. It went from a more positive approach to one that stigmatizes and divides people.

It’s becoming harder and harder to know when public health stops and where politics begins. It’s time to stop dividing Canadians and pitting one part of the population against another.”

While members of Trudeau’s own party denounced his dangerous and divisive tactics, opposition parties attempted to resolve the situation by proposing a timeline for lifting COVID restrictions. This simple gesture would have been enough to send most truckers home. However, Trudeau’s government rejected this motion. Why? The answer soon became obvious.

They wanted to turn the Freedom Convoy into a political crisis. After 17 days of complete inaction, Trudeau went to the most extreme option possible: Martial law.

On February 14th, the Trudeau government enacted – for the first time ever in Canadian history – the Emergencies Act which gives the government sweeping powers. This extreme measure was meant to be used in case of a dire national emergency:

3 For the purposes of this Act, a national emergency is an urgent and critical situation of a temporary nature that

Nothing about the Freedom convoy requires the enactment of the Emergency Act. The protests were overwhelmingly peaceful. On the other hand, a few blockades at the Canada-USA border did prevent traffic from flowing freely. However, nearly all observers agree that regular laws were more than enough to address these activities that were deemed illegal. But none of these tools were used. The situation was allowed to fester. While Trudeau states that the Emergencies Act was necessary, the prime ministers of several provinces, including Quebec, Alberta, Manitoba, and Saskatchewan all opposed its invocation.

The Emergencies Act gives the federal government special powers including:

During the press conference, Trudeau stressed the fact that the Act would be “limited in time and targeted to specific geographical regions”. He also added that the military would not be used against the public. However, Trudeau had also stated in the past that there would never be vaccine mandates in Canada. But here we are. More importantly, despite the words that were said during the press conference, the government nevertheless opened that legal door.

Bizarre fact: The only time martial law was declared in Canada was in 1970 and it was invoked Trudeau’s father – Pierre Elliot Trudeau. 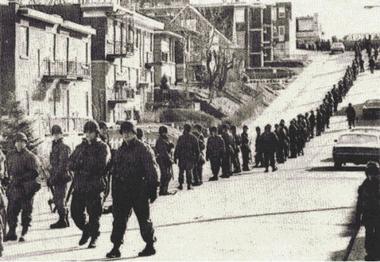 “The government is issuing an order with immediate effect under the Emergencies Act, authorizing Canadian financial institutions to temporarily cease providing financial services where the institution suspects that an account is being used to further the illegal blockades and occupations. This order covers both personal and corporate accounts.

Crowdfunding and payment service providers, which are being used to raise funds for the protests, will have to register with Financial Transactions and Reports Analysis Centre, the country’s main monitor for money laundering and terrorist financing, and they must report large and suspicious transactions.

The illegal blockades have highlighted the fact that crowdfunding platforms and some of the payment service providers they use are not fully captured under the proceeds of crime and terrorist financing act,” she said, adding that the changes announced Monday “cover all forms of transactions, including digital assets, such as cryptocurrencies.”

In short, the Emergencies Act came with provisions regarding crowdfunding – a new precedent that will undoubtedly be imitated across the world.

People from all sides of the political spectrum were baffled by Trudeau’s bizarre and irrational response to the trucker crisis. While some accuse him of “lack of leadership”, the truth goes way beyond a character flaw. Trudeau is actually backed by the most powerful leaders in the world. He does not decide anything. Klaus Schwab himself stated that the World Economic Forum has penetrated his government.

The trucker crisis was purposely engineered to reach an impasse in order to justify the invocation of the Emergencies Act. After two years of COVID-policies that tested the limits of freedom and democracy, the Canadian government now took things to yet another level.

Nearly all observers agree that the threshold required for the invocation of the Emergencies Act (endangerment of Canadians or national sovereignty) was not crossed. Far from it. However, like most COVID measures of the past, a precedent is being set. The threshold giving the government sweeping powers has been lowered. If the Emergencies Act can be invoked to stop a bunch of truckers from protesting, it can be used for anything.

The WEF wanted this to happen. And this might be a blueprint for things to come all around the world.

Something is Terribly Wrong in Quebec aka COVID Hell