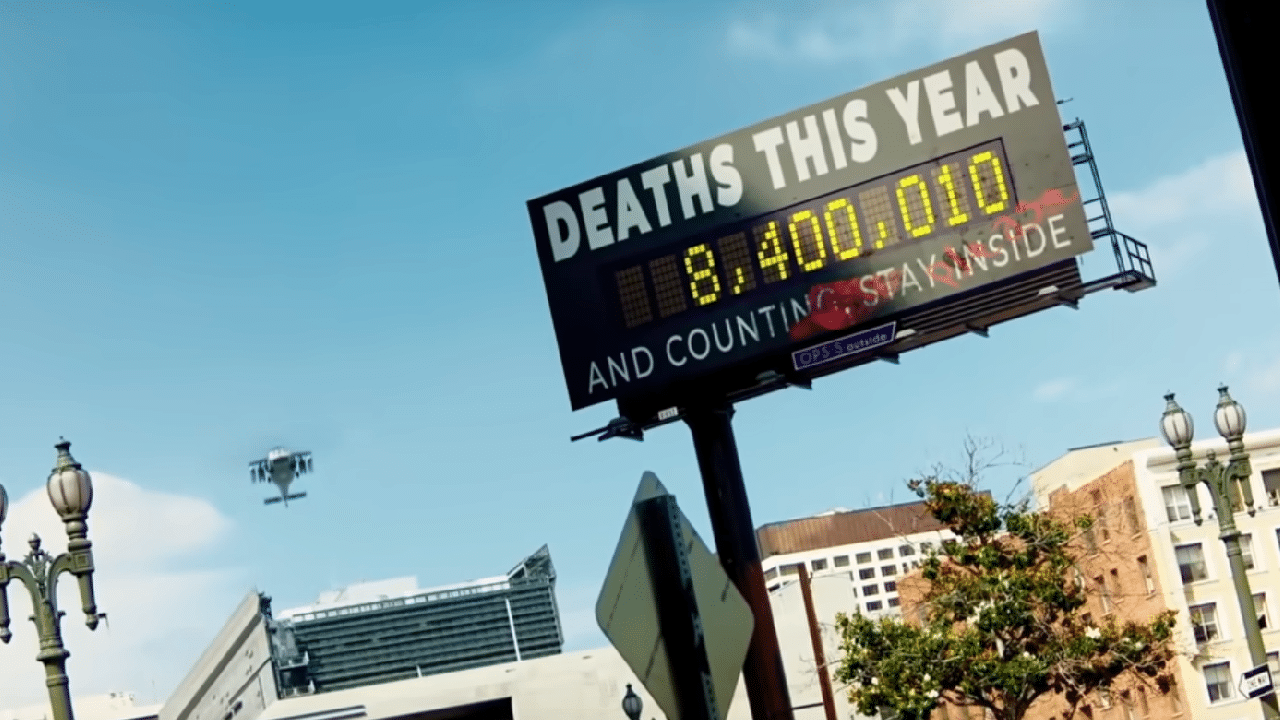 At the moment of writing these lines, the world is entering its ninth month of “pandemic life”, characterized by various degrees of lockdowns, clampdowns on social gatherings, sweeping mask mandates, high tech surveillance, and the establishment of a faceless tyranny based on stats and numbers.

As people are looking for ways to wake up from this nightmarish scenario, Hollywood had a great idea: Let’s make a movie about everything that is happening right now – but worse.

The upcoming movie Songbird is defined as a “pandemic thriller” (is there anything “thrilling” about a pandemic?) taking place in 2024. Directed by Hollywood staple Michael Bay (Transformers, The Purge, A Quiet Place), the movie is about COVID-23 (a mutation of COVID-19) turning America into a dystopian nightmare, complete with quarantine camps. Wikipedia describes the movie’s premise as follows:

In 2024, the SARS-CoV-2 virus has mutated and the world is in its fourth pandemic year. Infected Americans are taken from their homes and forced into quarantine camps called Q-Zones, where some fight back against the brutal restrictions. A motorbike courier, Nico, who has a rare immunity, is in a relationship with Sara, a young artist whose lockdown prohibits them from physical contact. When Sara is believed to have become infected, Nico races across the empty streets of Los Angeles in an attempt to save her.

Songbird was created, shot, and (soon) released in record time. Principal production began on July 8th and wrapped up on August 3rd. It was the first movie to shoot in Los Angeles during the COVID-19 lockdown. Filming was initially halted by SAG-AFTRA (the Screen Actors Guild) but permission to shoot was granted the day after. I guess they understood that this narrative had to be released to the public ASAP.

Speaking of narratives, the movie was created in collaboration with a digital content studio aptly named Invisible Narratives. Founded by Adam Goodman, the former President of Paramount Pictures and Dreamworks SKG, the company describes itself as “disruptive storytelling that fuels culture in partnership with people of influence.” In other words: Occult elite propaganda.

The company’s slogan is also extremely fitting as it also applies to the occult elite as a whole: Hidden in plain sight.

Google search result for Invisible Narratives and its ominous slogan.

One only needs to watch the official trailer of Songbird to understand what it is truly about: Predictive Programming. Here’s a look at this pieced of supposed “entertainment”.

Songbird‘s trailer begins with a very ironic use of Bob Marley’s song Three Little Birds in which he repeats “every little thing is gonna be all right”. I’m pretty sure that Marley wouldn’t have approved the use of his song in the insanely oppressive context of the movie. However, Hollywood loves to poison wholesome and optimistic content with its soul-crushing agenda of dread and darkness so it paid for the rights of the song and that was the end of it.

One thing is for sure, every little thing is not all right in Songbird. As the song momentarily stops, we hear an announcement saying:

“Curfew is now in effect. All unauthorized citizens must stay indoors.”

As we hear these words, viewers are treated to a series of upsetting landscapes.

Entire highways are closed because people are forbidden from traveling anywhere.

An abandoned amusement park with the words “doomed” spraypainted on a wall. Fun is dead.

A grim billboard showing over 8 million deaths in 2024 while ordering people to stay inside. This type of Orwellian crap already exists right now.

Then, we hear a newscaster talking about the “213th week of lockdown”, which means that the lockdown of 2020 never ended.

In 2024, people are still being bombarded with the same pandemic news we are seeing right now.

In this sad context, millions of infected Americans are detained in quarantine camps. The same concept of quarantine camps was also depicted in Utopia (a bizarrely prophetic series) and Contagion (another piece of predictive programming from 2012).

The words “Let us out!!!” and “Help” strongly imply that people are being held against their will in terrible conditions.

Masses of infected people are piled up in decrepit camps monitored by hovering helicopters.

People who are not infected live in heavily controlled and never-ending lockdown. The technology used to control people is far from being “science fiction”. We’re about 80% there in real life.

The movie’s protagonist flashes a wristband proving that he is immune to gas-masked soldiers patrolling the streets.

The concept of an immunity bracelet was already introduced to the masses in the aforementioned movie Contagion. 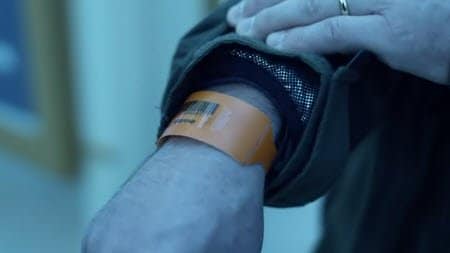 A screenshot from the movie Contagion. People who got the vaccine were given wristbands with barcodes in order to enter public spaces.

The idea of “immunity passports” or “immunity bracelets” is already floating around in real life for and movies such as Contagion and Songbird help normalize it to the public.

Phones are used to scan faces and detect illnesses.

In the screenshot above, the phone detects an anomaly. A Siri-like voice then says:

“Armed guards will be arriving in four to six hours. You must not attempt to leave your home or you will be shot on sight”.

I guess it’s time to uninstall this app and give it a bad review.

Authorities barge into a home to forcibly send a citizen to a quarantine camp.

Considering the fact that this movie takes place in the very near future, uses the name of an actual virus that is currently wrecking the entire world, that it takes place in real locations (i.e. Santa Monica pier), and involves real government organizations, can we still call this “entertainment”? Here’s the official definition of the word:

1- the act of entertaining; agreeable occupation for the mind; diversion; amusement
2- something affording pleasure, diversion, or amusement, especially a performance of some kind.

I cannot picture anyone getting “pleasure, diversion or amusement” by watching an even worse version of the current pandemic. If COVID-19 (and the hysteria surrounding it) was a stab wound in someone’s stomach, Songbird is the equivalent of a Hollywood douche poking at it with his fat, stubby finger.

It doesn’t take a “conspiracy theorist” to see that there’s something off about this narrative in today’s context. Here’s an excerpt from a Movie Blend article about Songbird:

In another context, Songbird does look entertaining, but it does not look like it’s opening up a valuable conversation. It looks like it exists just to add extremes and shock value to an already traumatizing collective experience we’re all still processing on a daily basis. For someone to jump two years into the future using the actual events happening now as a reference point is not creative or interesting. It’s merciless and cold. Imagine literally any other traumatizing world event doing this while we were in the thick of it. If we were in the thick of World War II, do you think we would want to see an imagined circumstance where it got worse? No, that’s why musicals and cartoons started to get super popular back then.

The truth is that Songbird was not created for our entertainment. It is all about planting ideas and concepts in our collective heads. It is about normalizing new levels of tyranny and hysteria by presenting them as a logical evolution of the current context. In short, it is about predictive programming.
Allan Watts originally defined “predictive programming” as follows:

“Predictive programming is a subtle form of psychological conditioning provided by the media to acquaint the public with planned societal changes to be implemented by our leaders. If and when these changes are put through, the public will already be familiarized with them and will accept them as natural progressions, thus lessening possible public resistance and commotion.”

That is why such movies exist. Even if real life does not reach the levels of insanity of Songbird (let’s hope so), such movies create precedents in our collective unconscious. If new restrictions are introduced to the public, people will say “at least it is not as bad as in Songbird”.

In short, none of us need to watch this brainwashing session disguised as a movie. And all of us need to make sure that none of its insanity seeps into real life.