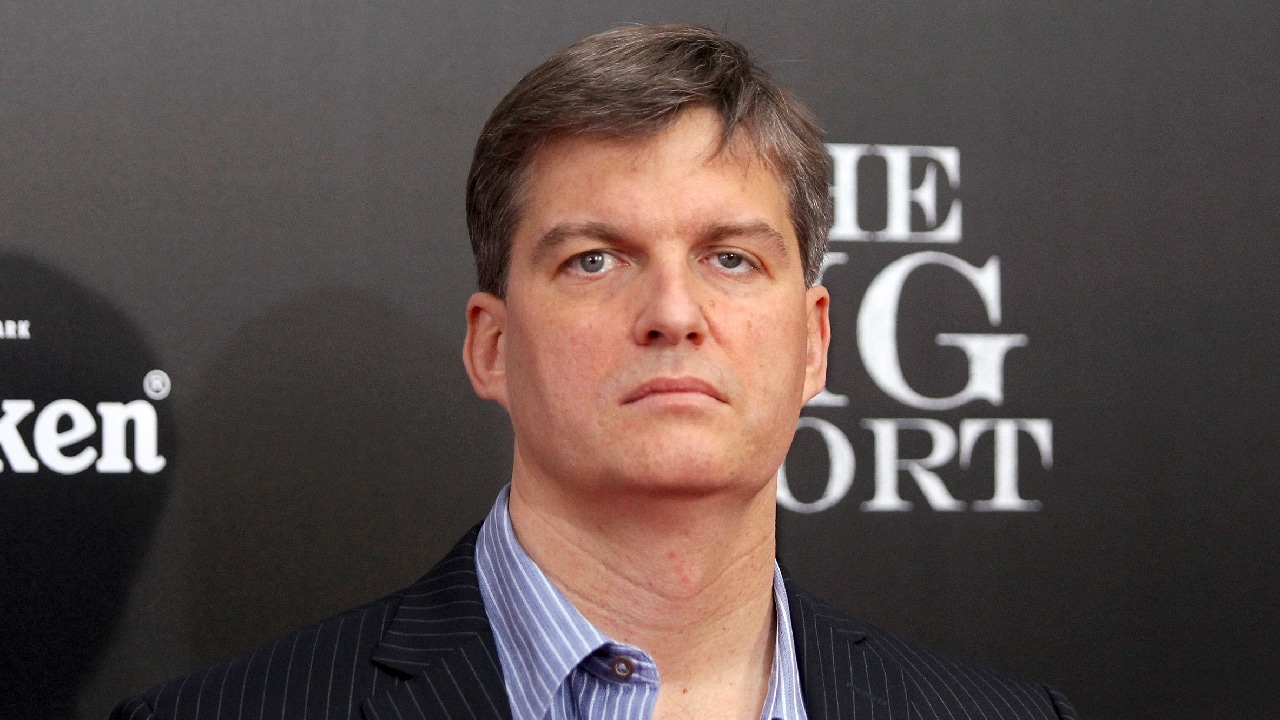 The movie The Big Short was inspired by the true story of Michael J. Burry, the weird and slightly autistic hedge fund manager who shorted the mortgage bond market in 2007 (his role was played by Christian Bale). Indeed, after processing thousands of pages of data in his powerful, computer-like brain, Burry predicted the mortgage crash months before it actually happened. He also made tons of money off the situation by betting against the housing market – a move that was never seen before. The net result: He made $100 million for himself and $700 million for his investors.

Since then, Burry focused on private investing (mostly water, which he considers to be the commodity of the future) and remained steadily away from the spotlight. However, the massive panic and lockdown caused by COVID-19 seem to have triggered an error message in his powerful, computer-like brain. And that error message was so persistent that it compelled him to do the unthinkable: He created a Twitter account. His goal: To address the sweeping, unprecedented government response to this pandemic.

Burry is not saying that people should immediately go back to sketchy bars and lick each other’s faces. He’s calling for a measured approach, one that allows healthy people to live normally and go to work while protecting those who are at risk. In short, he believes that the current remedy might be worse than the disease. In an interview with BNN Bloomberg, Burry stated:

“I became active on Twitter in the last week for the first time ever. I just had a lot to say and get off my chest. I joined Twitter because I was deeply saddened by a national shut-in that is devastating the livelihoods of Americans in many ways. I saw the prevailing narratives ignoring the masses that are not at lethal risk from COVID-19.

Stay-at-home policies need not be universal. COVID-19 is a disease that is somewhat lethal for the obese, the very old, the already-sick. Public policies have no nuance because they want to maximize fear to enforce compliance. But universal stay-at-home policies devastate small and medium-sized businesses and indirectly beat up women and children, kill and create drug addicts, engender suicides, and in general create tremendous misery and mental anguish. These secondary and tertiary effects are getting no play in the prevailing narratives.

Stay-at-home policies are only good for equipment and medicine shortages at or near peak disease. But this could be achieved with the order affecting a much more targeted group of people.

Meanwhile, stay-at-home reduces and slows the development of herd immunity to COVID. Herd immunity is a fundamental step to putting this behind us.

I am very private, but what is going on in this country and globally supersedes that. In the end, Twitter is a risk-free activity. I have only been on Twitter for a week or so, but I figure l will just try to focus and not to get too deep in the weeds.”

In many ways, Michael Burry is the anti-Bill Gates. While Gates recently called for a mind-boggling 10-week national lockdown (and for microchipping those who get the upcoming vaccine), Burry calls for a quick end to the lockdown and the introduction of a more targeted approach. Although both Burry and Gates are very rich, there’s a major difference between them: Burry is an actual licensed physician with an M.D. from Vanderbilt University School of Medicine while Bill Gates is a college dropout with zero qualification in medicine. However, it is Bill Gates who the “authoritative figure” right now.

Since joining Twitter on March 23rd, Burry has been posting several times a day with a laser-like focus on COVID-19 response. While, at first, his tweets garnered little attention, things began to pick up when people realized who he was. Here are some of his tweets in chronological order.

If COVID-19 testing were universal, the fatality rate would be less than 0.2%. This is no justication for sweeping government policies, lacking any and all nuance, that destroy the lives, jobs, and businesses of the other 99.8%.

COVID-19 policy cannot be settled by CYA politicians career ID docs. Too much hammer/nail and too little common sense. POTUS must reflect the interests of the working class and small business here – the economy cannot crash 30% to save the 0.2%. Set America Free! #COVID19

Prudent plan: 1) Standardize on chloroquine and azithromycin -cheap and available 2) Sick and elderly voluntarily shelter in place. 3) Americans lead their normal lives with extra hand washing and special care if around elderly. Saving the economy means life, not murder.#COVID19

Roughly 2.8 million people die in the US each year. The worst estimates for COVID would add less than 10% to that total. Consider this as the media implies Americans are dying at multiples of normal rates. Compassion is not incompatible with facts.#COVID19https://t.co/ztTPR33L4P

Government anti-COVID measures are causing a rise in domestic violence – the women and children that would not have been hurt by the virus are being terrorized at home instead. https://t.co/ji7PstnQtN

NJ doc Stephen Smith (MD Yale ‘89) is on the front lines and notes none of his COVID patients under 70 who have a BMI under 30 have progressed to severe disease. Then he hits us with this! Set America Free! #COVID19 pic.twitter.com/GmkWO7c2sR

Unconscionable. Let’s put today’s horrific jobless claims in perspective. This is not the virus. This is the response to the virus killing the US and global economy, with all accompanying human tragedy. I present America’s initial jobless claims over the decades. #COVID19 pic.twitter.com/f2Lhz43rPh

15 million mortgage defaults? An unemployment rate exceeding 10%? Social unrest can be expected as it passes 20%. Unthinkable in America. Just two months ago the economy was great. A virus shows up that kills less than 0.2%, and the government does THIS? https://t.co/A7Ge7MnoI9

How many tens of thousands extra American opioid deaths will occur because of the government’s national shut-in? At what cost prevention? #COVID19https://t.co/04oM50Cuzd

>5 million victims of abuse in last <12 mos. Children involved 30-60% of the time. Locking these victims in with their abusers during a stressful period and job losses? Earth’s most under-reported crime gets a big boost. At what cost prevention? #COVID19https://t.co/AkIy6zuBXh

Spoken like a guy that has been in government since 1968 and the same position since 1984. If you are not obese or already sick, your tiny <0.1% risk from COVID is replaced by the 100% certainty of economic ruin, and that’s fine by him. #faucifacepalmhttps://t.co/eRkQiiDXjb

In the following tweet, Burry addresses an article written by no other than Henry Kissinger titled The Coronavirus Pandemic Will Forever Alter the World Order.

I disagree with Mr. Kissinger. The world didn’t start from a point of trust in government and institutions. There is no need for the world to return to something that has not existed in a long while. Shortly, we will, quite simply, move forward. #COVID19https://t.co/0uUJPpjeLz

The shut down is not good for anyone – only 30% of whites and Asians can work from home, but it’s far worse for blacks and Latinos. Hard-earned job and wage gains are evaporating fastest for the already-underprivileged. At what cost prevention? #JobsReporthttps://t.co/cT06Z9zLeY

Another someone with influence who will not feel economic pain dictating to the masses without influence how their economic pain is worth it. #COVID19 #endthelockdown https://t.co/inDtUAsWoK

Will be a rough week. But note the WHO has introduced a new code for COVID-19 deaths where “laboratory confirmation is inconclusive or not available.” The CDC counts deaths where COVID-19 is “assumed to have contributed.” Death inflation anyone? #COVID19https://t.co/QwfKmnl2ES

Note what sector is gaining the most jobs. That sector is the one forcing the collapse of the private sector economy. #COVID19 #JobsReport pic.twitter.com/jUycSacclh

Sense in Japan: “Even though we will declare a state of emergency, we will not lock cities down…We will ramp up our effort to maintain economic activities as possible as well as preventing the further spread of the virus.” +$1T stim bazooka. #lockdown https://t.co/CkxyqXVkjI

Burry is not done with his twitterstorm. He actually added a few tweets while I was writing this article.

In the current climate of fear and media-generated panic, Michael Burry brings his brand of fact-based analytical thinking. While most media pundits (i.e. Bill Gates) are backed by powerful organizations with hidden agendas, Burry is basically a private person who appears to be genuinely concerned with the well-being of his fellow citizens. As Burry says, now is the time for facts, not fear.

Although one might not agree with his views, his voice needs to be heard. We need to have a rational debate about the correct response to this situation. Because if governments keep putting billions of people on house arrest every time there’s a new virus, we’re in serious trouble.

“Order Out of Chaos”: How the Elite’s Plans Were Foretold in Popular Culture