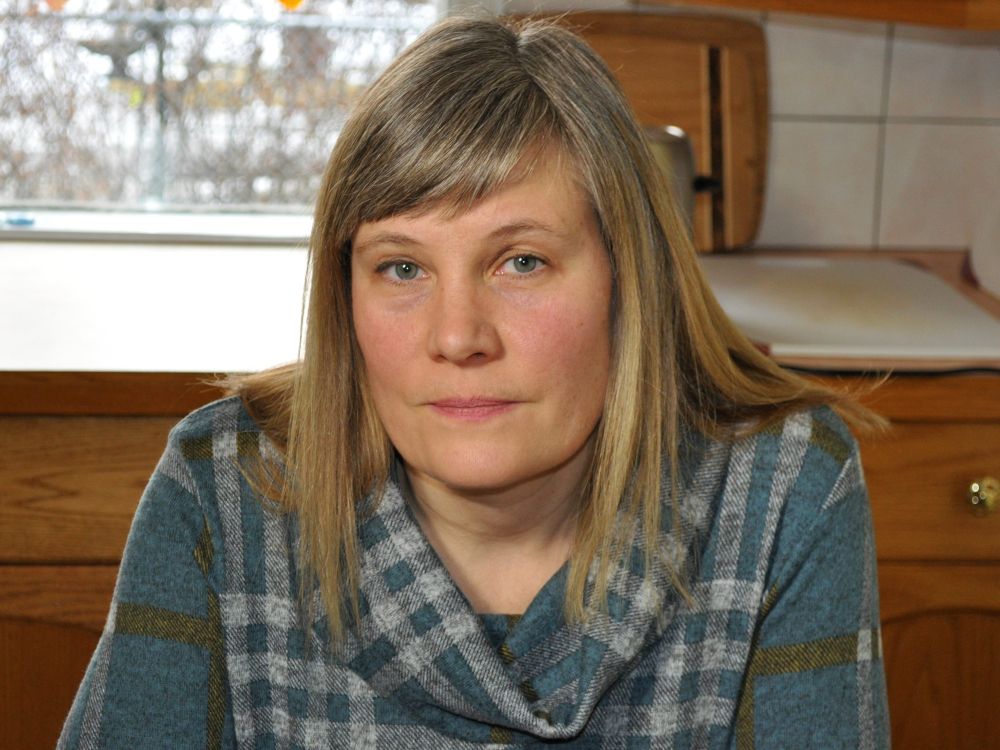 Kathleen Lowrey is an associate professor of anthropology at the Faculty of Arts of the University of Alberta, in Canada. She is also serving as the chair of the undergraduate program – an administrative role which includes duties such as chairing a committee about courses, approving transfer credits, and running a special seminar for honors students in the department.

She’s also a feminist. However, according to some anonymous students and the higher-ups of her University, she is not the right kind of feminist. Because she believes that women are … women. Even worse, she believes that men cannot be women because they don’t have a vagina.

These extreme and radical views caused her to become “problematic” as she was pressured to leave her administrative role. When she refused to do so, she was fired.

Lowrey says she was told in meetings that complaints, made to the dean of students and the university’s Office of Safe Disclosure and Human Rights, were that her views on feminism were making students feel unsafe and there were concerns this was driving students away from choosing anthropology as a major. She doesn’t know exactly the nature of the complaints — or who made them — because they were made informally and anonymously, she said.

“My chair was hoping that for the good of the department I would resign from my position.”

She said she was also told she had been discouraging students from organizing Pride events, which she denies. It was this claim which led her to conclude the complaints centred around her views on gender.

Following a subsequent meeting with the dean of the faculty, she received a letter saying she couldn’t effectively continue in the role and her leaving would be in the best interests of the department. Lowrey said the letter didn’t expound upon the reasons for her dismissal, and she maintains she has never been given proper reasons for her dismissal in writing.
– National Post, University of Alberta prof loses admin role over views on gender that made students feel ‘unsafe’

Lowrey is not a conservative that is looking to “own the libs”. She actually ascribes her intellectual formation to Marxism and radical feminism. While this kind of background should receive an enthusiastic thumbs-up from the social justice crowd, it is not enough anymore.

That’s because Lowrey describes herself as a “gender-critical feminist” which considers biological sex of primordial importance in fighting for women’s rights. While, only a few years ago, this precept was the norm in feminist circles, it is now deemed bad and “transphobic”.

Until what seems like a few minutes ago, there was nothing controversial about this opinion. But now there is. The only “correct” opinion to hold is that gender expression trumps biology in any rights-based claims. And in academic circles, Lowrey’s views, which she is at no pains to hide on campus and off, are a form of apostasy that cries out for punishment.
– National Post, Barbara Kay: U of A professor holds the line on free expression

Lowrey boils her views on feminism down to a few key ideas: Men cannot get pregnant, lesbians don’t have penises, and biological sex is real. These views apparently made students feel “unsafe” and  “caused them harm”.

We are talking about a University (a place of the highest learning possible) being “harmed” by the pre-school teaching that “boys have weewees”.

In an interview with the Edmonton Journal, Lowrey explained the rationale behind her views:

“People should be able to express their gender in whatever manner they wish (but) I don’t agree with biological sex being irrelevant. I think treating biological sex as irrelevant has some really serious policy implications. As an example, housing trans-identified men in women’s prisons is not fair to women prisoners and I think it puts women at risk.”

“I said on the first day of class we’re going to read material in this class that are currently out of fashion in academia. You certainly don’t have to agree with me. Since this is a university, I think it’s important to be exposed to — this is important literature they should be aware of.

The university has said it’s perfectly OK to fire people for doubting that men can get pregnant, for doubting lesbians can have penises. The implications are very dangerous because this is a live issue in our contemporary Canadian democracy.”

She is also worried about students who agree with her but are afraid to voice their opinion due to the current climate of intimidation.

“They’re not paranoid. Because this is not an abstruse problem, it’s a live debate in our current society and for the university to take the position that if you’re on the wrong side of this, we’re going to fire you, is terrifying for students.”

Another worrying aspect of this story is the underhanded (and cowardly) way her situation was handled. Complaints were “informally” made by anonymous students, whom Lowrey doubts ever attended her class. Also, she was falsely accused of discouraging a Pride parade. When she was pressured to resign, Lowrey refused to do so, arguing that the onus was on the university to dismiss her and to explain its reasons in writing. The Dean of arts then dismissed her in writing with the vague reason:

“It is not in the best interests of the students or the university for Lowrey to continue sitting.”

In other words, Lowrey wanted the university to justify in writing the basic principle behind her dismissal. There was none. The sad fact is that Lowrey was probably targeted by the radical groups that are turning universities into indoctrination camps. And the university caved into the pressure. This is happening all over the world.

Until recently, the author of the Harry Potter series J.K. Rowling has been enjoying unlimited praise from the social justice crowd. However, things soured greatly when she began expressing her views regarding gender a few months ago. More recently, Rowling expressed her frustration towards an absurdly-worded headline that uses the expression “people who menstruate” instead of “women”.

‘People who menstruate.’ I’m sure there used to be a word for those people. Someone help me out. Wumben? Wimpund? Woomud?

The response to this tweet was immediate. And, of course, mass media amplified everything to make it a big issue. Somehow, the tweet was interpreted as being “transphobic” – even though she never expressed any kind of “phobia” towards trans people. Rowling was also accused of being a TERF – an acronym for “trans-exclusionary radical feminist”. Yeah, they’re good at inventing words for censoring ideas.

As if on cue, Harry Potter himself took his broom and flew into the debate to “correct” Rowling. 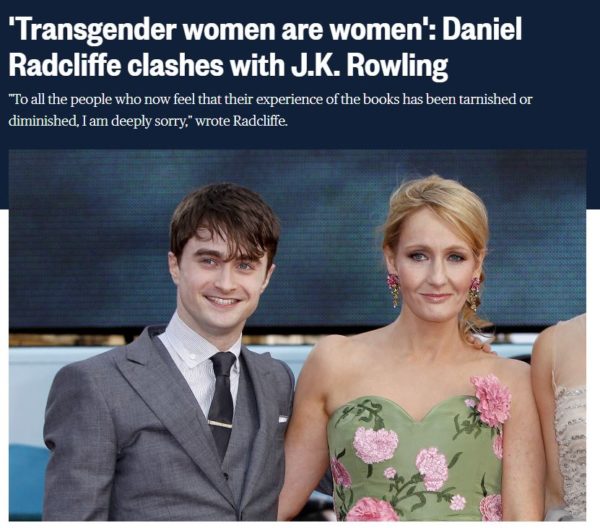 Faced with this kind of backlash, many retract what they say and apologize profusely. J.K. Rowling stood her ground and tried to clarify things. However, I doubt it will quell the Twitter bots programmed to attack anything that goes against the Agenda.

If sex isn’t real, there’s no same-sex attraction. If sex isn’t real, the lived reality of women globally is erased. I know and love trans people, but erasing the concept of sex removes the ability of many to meaningfully discuss their lives. It isn’t hate to speak the truth.

Although I might fundamentally disagree with both Lowrey and Rowlings on a wide range of topics, we can at least agree on some basic facts. First, telling the truth is not an act of hate – it is an act of telling the truth. Second, one’s gender is based on one’s genitals. The words gender and genitals both come from the Latin root gen, which means “to reproduce”. Gender is based on one’s reproductive organs. The fact that one declares that they identify as another gender is all well and good, but it does not change one’s actual gender. However, that is what is being forced on the world right now. Some like cite WHO-funded “studies” from like 2015 to explain that sex and gender are not the same. How about the “studies” from the last several thousands of years before that?

I mean, there are currently men who “identify as women” competing in women’s sports and dominating them. Newsflash: Men and women have different bodies. Are we seriously that delusional?

This agenda is nothing less than insane. And they know it. For this reason, they do not encourage rational debates based on facts. Instead, they label those they disagree with as “hateful”. The result: University professors get shunned and authors get attacked by media, even though they did not say anything hateful.

As Rowling stated: “It isn’t hate to speak the truth”.

Lebanon Was Torn Apart by a Civil War and the U.S. is Going Down a Similar Path