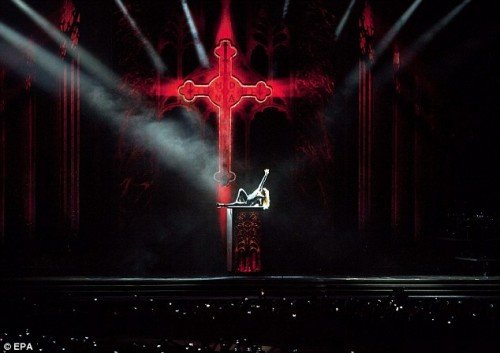 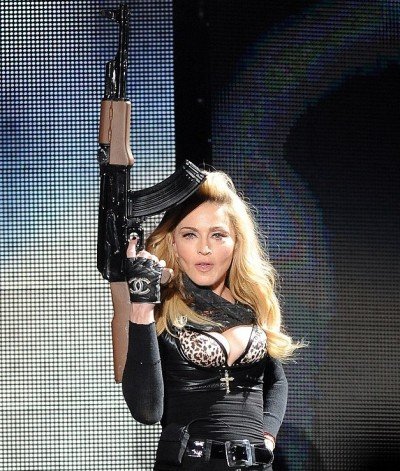 The Grand Priestess of the music industry is back on tour and it began in Tel-Aviv, Israel. As we’ve seen in the article on the 2012 Superbowl Half-Time show, Madonna signed a multi-year deal with Interscope records and, since then, all of her new works fully embrace the same Illuminati Agenda as the rest of the music industry. However, since it is Madonna things are taken to another level. People have come to expect controversy from Madonna, but this is not simply controversy for the sake of it like she used to do  in the 90’s. Nope, this is symbolic and calculated controversy, engineered to carry all of the Illuminati’s messages. Here’s a short article from the Telegraph that sums up her show.

Madonna tells Israel: you can’t be a fan of mine and not want world peace

Madonna, whose conversion to the esoteric Jewish sect Kabbalah sparked an unlikely trend in Hollywood, launched her world tour in Tel Aviv last night with a plea for peace in the Middle East.

The American singer greeted 30,000 Israeli fans in Tel Aviv’s Ramat Gan Stadium with the declaration: “You can’t be a fan of mine and not want peace in the world”. Her management had distributed hundreds of free tickets to

“We all bleed the same colour,” Madonna told her ecstatic crowd, standing against the backdrop of an enormous illuminated crucifix and satanic symbols. “If we can all rise above our egos and our titles and the names of our countries and our religions, and treat everyone around us with dignity and respect, then we are on the road to peace. If there is peace here in the Middle East, there can be peace in the whole world.”

The diva then went on to perform her song “Gang Bang” accompanied by images of blood stains, video clips showing the singer spraying bullets from both a hand gun and a machine gun, and closing on the phrase “die, bitch!”

Israel’s ultra-orthodox community, however, were outraged that the “Like A Virgin” singer was performing in the Jewish state. A report in religious journal ‘HaEda’ described the tour as “disgraceful” and claimed rumours the “famous gentile singer” would be visiting religious sites in the country’s north had spared “pain and rage within the god-fearing community”.

Madonna has reportedly postponed a planned tour of Galilee following protests by the local religious community.

So the show began with Madonna pleading for “world peace”, a slogan of the New World Order. A few minutes later, she dances around toting machine guns, revolvers and an AK-47 – a weapon that is widely used in wars across the world, including in Israel. The cognitive dissonance between what Madonna says (i.e. “If there is peace here in the Middle East, there can be peace in the whole world”), and what she does (shooting and killing bunch of people with blood stains everywhere) is typical of Illuminati double-speak. Like Orwell wrote several decades ago, WAR IS PEACE, FREEDOM IS SLAVERY, and IGNORANCE IS STRENGTH. 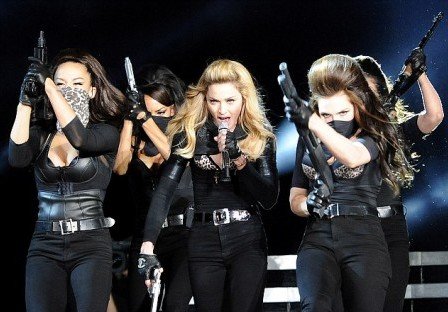 Glamorizing death, violence and oppression. Also, leopard prints represent Sex-Kitten programming, hinting that these women were “programmed” to do this.

Atop hypocritical double-speak involving war, there is also hypocritical double-speak involving spirituality. After her moralizing speech about “respect”: “If we can all rise above our egos and our titles and the names of our countries and our religions, and treat everyone around us with dignity and respect, then we are on the road to peace”, the show turns into a big Black Mass insulting Christianity.

The show begins with a red (bloody) illuminated crucifix bearing the letters MDNA – an acronym strangely similar to MDMA, another name for Ecstasy – a drug that is very popular on dance floors across the world.

Madonna’s Black Mass included monks turning into male strippers along with guts, guns and satanic symbols being flashed on the walls. Things that so many pop stars did in the recent years. This is not about art, this is all-out, insistent propaganda.

In short Madonna’s MDNA tour reflects how the Illuminati confuses the world with its double-speak. It lulls the world with talks of “world peace” while glamorizing the death, bloodshed and oppression of the masses. It moralizes people about “religious tolerance” while systematically attacking and destroying all faiths that are not part of the belief system of the world elite – which incidentally includes a bastardized version of Kabbalah as practiced by Madonna, the Grand Priestess of the Illuminati music business.

FacebookTwitterSubscribe
Related Topics:madonnamdna
Up Next

The Rothschilds and Rockefellers Join Forces in Multi-Billion Dollar Deal