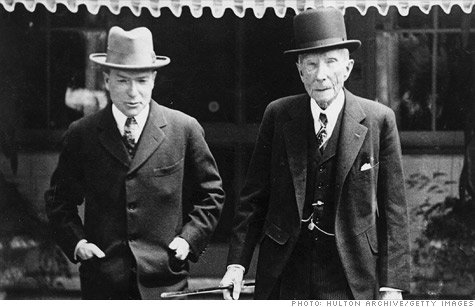 If you needed proof the world elite is a tightly-knit group geared on dynasties and bloodlines, well here’s a pretty good one. The most powerful family of Europe, the Rothschilds have joined forces with the most powerful family of America, the Rockefellers, in a super-multi-billion-dollar deal that greatly expands the influence of both families. For centuries, the Rothschilds and the Rockefellers silently shaped the world as we know it, influencing political decisions, the economy and even wars between nations. As Mayer Amschel Rothschild stated: “Give me control of a nation’s money and I care not who makes her laws.”

Both families are now major actors in the creation a New World Order and this deal is a great example of how these ancient dynasties are merging into a single, world-dominating unit. As David Rockefeller stated in his memoirs:

“Some even believe we are part of a secret cabal working against the best interests of the United States, characterizing my family and me as ‘internationalists’ and of conspiring with others around the world to build a more integrated global political and economic structure – one world, if you will. If that’s the charge, I stand guilty, and I am proud of it.”
-David Rockefeller, “Memoirs of David Rockefeller” p.405

Here’s an article on the mega-deal between the two most powerful families on Earth.

Transatlantic alliance between Rothschilds and Rockefellers for wealth management

As if they weren’t already well-connected enough, the world’s two greatest dynasties joined forces yesterday as Europe’s Rothschild banking clan bought a stake in the Rockefeller group’s wealth and asset management business to gain a foothold in the US.

The patriarchs of the two families – 96-year-old David Rockefeller and Jacob Rothschild, 76 – cemented a five-decade acquaintance as the younger man’s London-based £2bn RIT Capital investment trust bought a 37 per cent stake in the American’s business.

In addition to bringing together the two doyens, the deal will considerably expand the vast networks of both families.

To give a taste: Lord Rothschild’s son, Nat Rothschild, is a well-known entrepreneur with stakes in a range of companies such as Genel, the Kurdistan-focused oil producer run by former BP chief executive Tony Hayward and Bumi, the Indonesian mining group. He was also linked with George Osborne and Peter Mandelson at a notorious party on an oligarch’s yacht off Corfu in 2008.

On the Rockefeller side, for starters, David’s granddaughter Ariana is a successful fashion designer who married the construction heir Matthew Bucklin in 2010. And let’s not forget the founders who, although no longer with us, live on through their business creations.

The Rockefeller family’s journey to vast riches began in 1870 when John D Rockefeller set up Standard Oil and went on establish a fortune that is widely regarded to be the largest in US history. The family’s wealth management operation was set up in 1882 to manage that fortune.

The Rothschild dynasty goes back even further, to when Mayer Amschel Rothschild started a business in Frankfurt towards the end of the 18th century. It helped finance Britain’s war against Napoleon in the 19th century and raised funds for a loan allowing the British government to buy the Suez canal.

The Rothschilds bought the stake in Rockefeller from French banking group Société Générale for an undisclosed sum. SocGen, which has owned the stake since 2008, appointed a new head of private banking in March, replacing Daniel Truchi with Jean-François Mazaud.

SocGen’s sale of the stake comes as banks around the world sell peripheral assets to reduce their risks and strengthen their capital bases in order to meet tough regulations aimed at preventing a repeat of the 2008 financial crisis.

Commenting on the deal, Mr Rockeller said: “Lord Rothschild and I have known each other for five decades. The connection between our two families remains very strong. I am delighted to welcome Jacob and RIT as shareholders.”

Here’s an article describing the long-standing ties between the Rothschilds and the Rockefellers.

Rothschild and Rockefeller: their family fortunes

As a Rothschild trust prepares to buy a stake in the Rockefeller empire, how have these two dynasties managed to hold on to their wealth for so long?

You know you’ve really made it when your surname becomes an adjective.

In the late 19th century, the term “Rothschild Tudor” came into use to describe the family’s half-timbered estate cottages, sprinkled across their vast landholdings in Buckinghamshire. And in America, for more than 80 years, Rockefeller has been shorthand for “very rich indeed”. The name crops up in two classic Thirties Broadway numbers: On the Sunny Side of the Street (“If I never had a cent, I’d be rich as Rockefeller”) and the Gershwins’ They All Laughed (“…at Rockefeller Centre – now they’re fighting to get in”).

That’s why, for gilded dynasty watchers, the news of a union between these über-rich clans is so delicious: Lord Rothschild’s investment trust, RIT Capital Partners, is to buy a 37 per cent stake in Rockefeller Financial Services.

The numbers involved are pretty mind-boggling. RIT has £1.9 billion in net assets; the Rockefeller company has £22 billion. As if that wasn’t enough, these companies are just minor fragments of the two family empires. RIT was only founded in 1961; the principal family bank, NM Rothschild & Sons, was set up in 1811, and is run by Lord Rothschild’s cousin, David de Rothschild.

As we will see, there are a lot of Rothschild cousins, all of them pretty deep-pocketed, and plenty of them keen on starting new ventures. It’s symptomatic of the dynasty that Nat Rothschild, Lord Rothschild’s son, didn’t join the family bank when he left university but went to Lazard, before joining an investment management company, Atticus Capital, and then setting up a vast investment vehicle, Vallar plc.

As for Rockefeller Financial Services, that was founded as early as 1882, when John D Rockefeller set up one of the first investment management businesses designed to run a single family’s money. So, as well as making a fortune from their principal company – Standard Oil – the Rockefellers have been making money from their money, as it were, for 130 years.

That is what makes these two dynasties so exceptional – not just their dizzying wealth, but the fact that they have held on to it for so long: and not just the loot, but also their family companies. Other banking dynasties have fallen by the wayside – SG Warburg, founded by Siegmund Warburg in 1946, was swallowed up by Swiss Bank Corporation in 1995; its asset management side, Mercury Asset Management, was taken over by Merrill Lynch in 1997.

Barings Bank, the oldest merchant bank in London, founded in 1762, collapsed in 1995, thanks to the disastrous £827 million punt taken by Nick Leeson. Lehman Brothers remained under family control until the death of Robert Lehman in 1969 – the bank’s collapse in 2008 was the spark that lit the greatest recession since the Thirties. And who now banks with the Medicis, the leading bankers in Europe in the Middle Ages, and the financial backers behind the Renaissance?

It’s true that enormous fortunes – big enough to match 19th-century Rothschild and Rockefeller figures – have been made in recent years. Mark Zuckerberg is thought to be worth more than £12 billion since Facebook went public this month, though that figure seems to diminish a little with each Wall Street trading day. But, still, it’s unlikely that the name Zuckerberg will be associated with dynastic wealth for more than a century, as the Rothschild and Rockefeller names have been.

Part of the reason is that dotcom fortunes, like Zuckerberg’s, can be founded within the four walls of a tiny Harvard dormitory. Great banking and oil ventures needed vast manpower, and vast representation across the world, to establish a foothold in the Victorian rich lists. Those deep foundations produce a lasting infrastructure, a lasting familial obligation to the business, and that lasting association in the popular mind between a particular surname and great wealth .

Also, the Rockefeller and Rothschild families were consciously dynastic from the moment their businesses began. The founder of the Rothschild empire, Mayer Amschel Rothschild, was born in Frankfurt, Germany, the Jewish descendant of a 16th-century Rothschild, Izaak, who took his name from the sign outside his house – “Zum roten Schild” (“At the sign of the red shield”).

It was Mayer Amschel who laid the foundations of today’s Rothschild power base, by sending his five sons off to different European financial hubs: Frankfurt, Vienna, Paris, Naples and London, where his third son, Nathan Mayer Rothschild, founded the eponymous bank in the City in 1811. Almost immediately, NM Rothschild became a major force in the City, bankrolling the Duke of Wellington during the Napoleonic Wars.

John D Rockefeller got going a little later. The son of a travelling salesman, he made a fortune in food supply, before turning to oil refining in Ohio. By 1868, he owned the biggest oil refinery in the world, in partnership with his brother.

Throughout Rockefeller history, the name has stamped itself deep into the popular psyche through its philanthropy. That first John D Rockefeller founded Chicago University and Rockefeller University, as well as the Rockefeller Foundation – backer of, inter alia, the London School of Hygiene and Tropical Medicine, and the New School in New York.

It was his son, John D Rockefeller Junior, who built New York’s Rockefeller Centre. The Gershwins were quite right in their lyrics, Manhattan’s gazillionaires did fight to get into the soaring art deco skyscraper, and it became one of the city’s biggest pieces of prime real estate: 19 buildings across 22 acres, all in the very centre of New York, between 5th and 6th Avenues and 48th and 51st Streets.

The cliché of fabulous new wealth is “rags to rags in three generations”, but each generation of the Rockefellers kept on building up the current account, while spreading the philanthropic interests. John D Rockefeller Junior gave the land for the Museum of Modern Art, stuffed the Met with medieval masonry and set up New York’s best-kept secret, the Cloisters museum, a staggering complex of five French monasteries perched on a cliff above the Hudson River.

His five sons continued the dynastic pattern – and that dynastic importance was intensified with the use of Roman numerals: JD Junior’s son was dubbed John D Rockefeller III. His brother Nelson was Gerald Ford’s vice-president; another brother, Winthrop, was Republican Governor of Arkansas. And the youngest brother, David, is still with us, at 96, now the Rockefeller patriarch and still hurling dollar bills at charitable institutions. In 2005, he gave away £64 million to the Museum of Modern Art and Rockefeller University – each.

A philanthropic streak runs through the Rothschilds, too. Jacob Rothschild’s home, Waddesdon, in Buckinghamshire – built in Rothschild Loire château style, rather than Rothschild Tudor – now belongs to the National Trust, but he continues to cram it with treasures appropriate to its Victorian builder, Baron Ferdinand de Rothschild. He also endowed the National Gallery generously during his time as chairman of its trustees, and did much to turn Somerset House from London’s biggest car park into its finest neo-classical palace.

The new union between the two clans does more than weld two vast fortunes to each other, then. It allies a pair of dynasties that have – coincidentally, independently – followed the two rules that all mega-plutocrats must obey if they want to be remembered in a century’s time. One: ensure your children feel a duty to preserve the family fortune. And, two, paradoxical as it may sound: give as much money as you can to universities, galleries and hospitals.