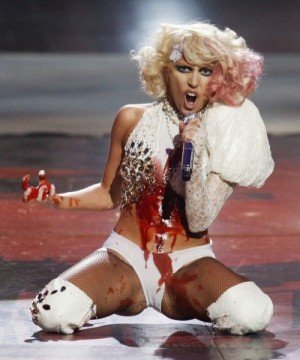 According to the staff at London’s Intercontinental Hotel, Lady Gaga left her room’s bath filled with blood. Her room’s housekeeper stated that Gaga was “bathing in blood as part of a Satanic ritual”. Is this true, false or maybe a publicity stunt? Not sure, but, in the light of previous articles, not impossible. Here’s an article from the Independent.

The eccentric singer reportedly shocked staff when she checked out of London’s lavish Intercontinental Hotel last summer and they discovered a pool of red liquid in the tub of her suite.

One housekeeper claimed the pop superstar was “bathing in blood as part of a Satanic ritual”.

She told website Truthquake: “Lady Gaga left large amounts of blood in the suite during a stay this summer. The incident was reported to the concierge, who was told to put it out of her mind.”

Other sources believe Gaga could have been using the red liquid as part of a “weird” stage costume or prop.

An insider said: “All of the hotel’s staff are convinced she was bathing in it or, at the very least, using it as part of one of her new costumes or weird stage routines.”

While it is unclear whether the liquid actually was blood or what the singer had been using it for, it is not the first time Gaga has been accused of unusual behaviour in hotels.

It has previously been claimed that she is terrified of evil spirits and reportedly has every hotel and tour venue scanned by a team of paranormal investigators before she will agree to stay there.

The ‘Edge of Glory’ hitmaker – who has previously said she believes she is inspired by the spirit of her dead aunt – allegedly splashed out £30,000 on state of the art Electro Magnetic Field meters to detect spectres.

A source said: “She believes in paranormal activity and won’t take any risks when she is on the road. It’s important to her to be safe from spirits.”

FacebookTwitterSubscribe
Related Topics:lady gaga
Up Next