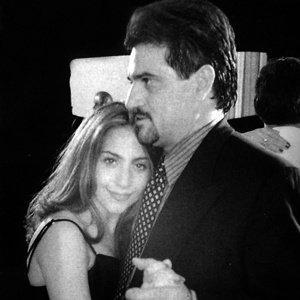 Pop stars that are wholly part of the “entertainment machine” often have family members that act more as handlers. We’ve recently seen in Britney Spears is on Tour and is Still Under Mind Control that her parents have a tight control on her. Amy Winehouse and Michael Jackson are also other interesting cases. Today, a NY Post article on Lady Gaga reveals that she too has a rather strange relationship with her father. He reportedly turned her into a “sexy queen” and she shares 50% of her revenues with him. Although the article paints a heart-warming picture of their relationship, some of the details are rather unsettling and that something more shady going on. Is he her handler? Whatever the case may be, she is another pop star with a bizarre relationship with her parents.

Lady Gaga gives 50 percent of her earnings to her father

How does the biggest pop star on the planet reward herself after she’s spent the past year touring the world, performing for President Bill Clinton, opening her own boutique in Barneys, releasing a high-fashion picture book, and prepping for her appearance on “Dick Clark’s New Year’s Rockin’ Eve”?

If you’re Lady Gaga, you go home to Mom and Dad’s and curl up in your childhood bedroom on the Upper West Side — which is what she plans to do this holiday weekend as her ABC variety special, “A Very Gaga Thanksgiving,” premieres Thursday night.

“She still doesn’t have her own place in the city,” one longtime friend tells The Post. “She and her family are very tight.”

OLD DAYS: The future star at a high-school dance with her father in 2004.

It’s her great paradox: At 25, Lady Gaga may be the most avant-garde performer of the last decade, a self-anointed Queen of the Freaks who reinvents herself with whipsaw rigor, yet she remains very much a nice Catholic girl who is most comfortable with 19-year-old sister Natali, mom Cynthia and dad Joe — who takes an unprecedented 50 percent of her earnings under their LLCs, Team Love Child and Mermaid Music.

She’s also bought a restaurant, one of her dad’s favorites on the Upper West Side. Formerly known as Vince & Eddie’s, it’s been renamed Joanne after his late sister. Celebrity chef Art Smith, who appears on Gaga’s Thanksgiving special, is at the helm.

But it’s the 50/50 split between Gaga and her father that’s most unusual. There’s only one other of its kind in the history of the music industry — between Elvis and Col. Tom Parker.

“There’s really no justifiable sense to doing a 50/50 deal with anyone in your career, other than someone you’re partners in a band with,” says Josh Grier, an entertainment lawyer who represents Wilco and Elvis Costello, among others. “Certainly no artist entering a management deal does anything close to that — a commission is usually 15 to 20 percent.”

That said, it’s quite possible that Lady Gaga, born Stefani Germanotta, believes her father has earned his share of her fortune, even though her success has allowed him to realize a lifelong dream: He now works in the industry, managing aspiring artists. Yet she likely sees this as further evidence of how similar they are; her adoration is unconditional. In January 2010, she told Elle magazine, “I’m married to my dad,” and that September, she told Vanity Fair, “I’m happier than I’ve ever been. I’ve been in my father’s arms for two weeks, wishing [him] a Happy Father’s Day.”

In the majority of her interviews, her father is — aside from herself — the most dominant character. Though Gaga has given alternate versions of her decision to quit using cocaine in 2007, in the most consistent one is Joe Germanotta coolly assessed his daughter’s downward trajectory with one devastating line: “He looked at me one day and said, ‘You’re f–kin’ up, kid,’ ” she said.

Joe Germanotta grew up in New Jersey, a rock ’n’ roll fanatic who loved Led Zeppelin and Billy Joel and who perhaps overshared with his daughter along the way: “He was having sex with girls under the boardwalk in New Jersey before he went to see Bruce Springsteen,” Gaga said in July. “He saw a lot of himself in me. My first piano teacher was a stripper.”

Though friends describe Gaga as equally close with her outgoing, elegant mom, her primary relationship seems to be with her dad. Joe Germanotta was a frustrated rocker who made his fortune in hotel Wi-Fi, becoming wealthy enough to buy a duplex on the Upper West Side and send his daughters to the Convent of the Sacred Heart (yearly tuition averages $35,000).

FLESH AND BLOOD: Pals say that when Gaga struck it rich, dad Joe was just fine with her outrageous, hyper-sexy style.

Though in many ways a highly traditional Catholic Italian-American, Joe was also a progressive and permissive patriarch. When his daughter announced her career goal — worldwide pop superstardom — he didn’t scoff or even suggest a backup plan. He used his money and connections to hire the best producers, to book studio time for a demo, to get Stefani in the room with record execs.

In 2005, when she decided to drop out of NYU in her freshman year, Joe agreed to bankroll her for 12 months, paying rent on her tiny fifth-floor walk-up on the Lower East Side and hauling her furniture up the stairs.

It was there, on the Lower East Side, where she met the only other man to compete with her father: Luc Carl, a bartender and failed heavy-metal musician who’s the subject of nearly every song on her multiplatinum debut, “The Fame.”

At the time, the power dynamic was reversed: Stefani was a preppy, sheltered rich girl from the Upper West Side whose teen idol was Britney Spears; Luc was one of the best-looking bartenders on the Lower East Side, dialed in to all the right parties and people, hired to lure the girls into the dive that was St. Jerome’s and keep them coming back.

At the time, Stefani was also performing as a burlesque dancer in downtown nightclubs and working out a more sexually provocative look, often walking down the street in fishnets, spike heels and heavy makeup, mistaken for a hooker or a transsexual, not caring either way. Her father, however, was appalled. Stefani told one friend that her father had reprimanded her for wearing underwear over her tights to a business meeting at Sony: “He said, ‘You look like a f–king slut!’ ”

As she began making progress, Joe was seemingly swayed by his daughter’s assertion that everything was in service of her art. He’s become so inured to his daughter’s outre costuming that he was recently shot at a party with his arm around Gaga, who was braless in a sheer top, nipples covered with black electrical tape. Perhaps his involvement in the industry accounts for the shift in attitude. Since 2008, Joe Germanotta has worked as a music manager, though none of the acts in his stable has yet to break. His daughter remains his most successful investment.

“Their relationship definitely improved as she made money,” says a source. “That helped substantially. I don’t know that it’s healthy. As soon as she started earning money, he said something to her like, ‘What man wouldn’t want you now that you’re becoming so successful?’ ”

Luc Carl both did and didn’t want her; she pursued him, hanging out at St. Jerome’s, the bar where he worked, until she got a date. It was a dubious achievement.

“Luc didn’t like pop music, so Luc basically didn’t respect anything she did,” her friend Brendan Sullivan said in 2010. Her friends were all confused as to why this smart, driven, charismatic girl was chasing a guy who treated her so poorly — cheating on her, mocking her for not being cool enough, deploring her ambition.

They’d break up and make up and break up again, and finally, ingeniously, she decided to use Luc right back, mining their wholly dysfunctional relationship for what would become “The Fame.”

“The concept she came up with,” Sullivan said, “is that she’s working hard on her music to impress this guy, but the harder she works on the music, the more it will take her away from him. So she wins and loses either way.”

Luc Carl and Gaga broke up — again — in May of this year, and though he prides himself on never giving interviews, he’s managed to monetize their relationship. This past Friday, Carl hosted the opening of Ludlow Manor, a Lower East Side bar in which he’s co-owner, and in March 2012, St. Martin’s Press will publish his first book, a motivational memoir called “The Drunk Diet: How I Lost 40 Pounds . . . Wasted.”

Sample nasty passage: “The truth of the matter is that I used to get more women when I was broke, flabby and completely wasted all the time — but those women were sloppy 22-year-olds, the kind of women who messed up my sheets and asked for cab fare in the morning. These women are known as cheeseburgers, by the way, and they’re to be enjoyed only once in a while, just like real cheeseburgers.”

Until their most recent breakup, Gaga would stay at Luc’s modest Brooklyn apartment whenever she was in the city, leaving her limo to idle outside all night, strolling to the corner bodega in full regalia, hailing the homeless man who serenaded her with “Bad Romance.”

This trip home, she’ll be with the other most-important and complicated man in her life — her dad. “As much as I want the world to be happy,” she said in July, “I just want my dad to be proud of me.”