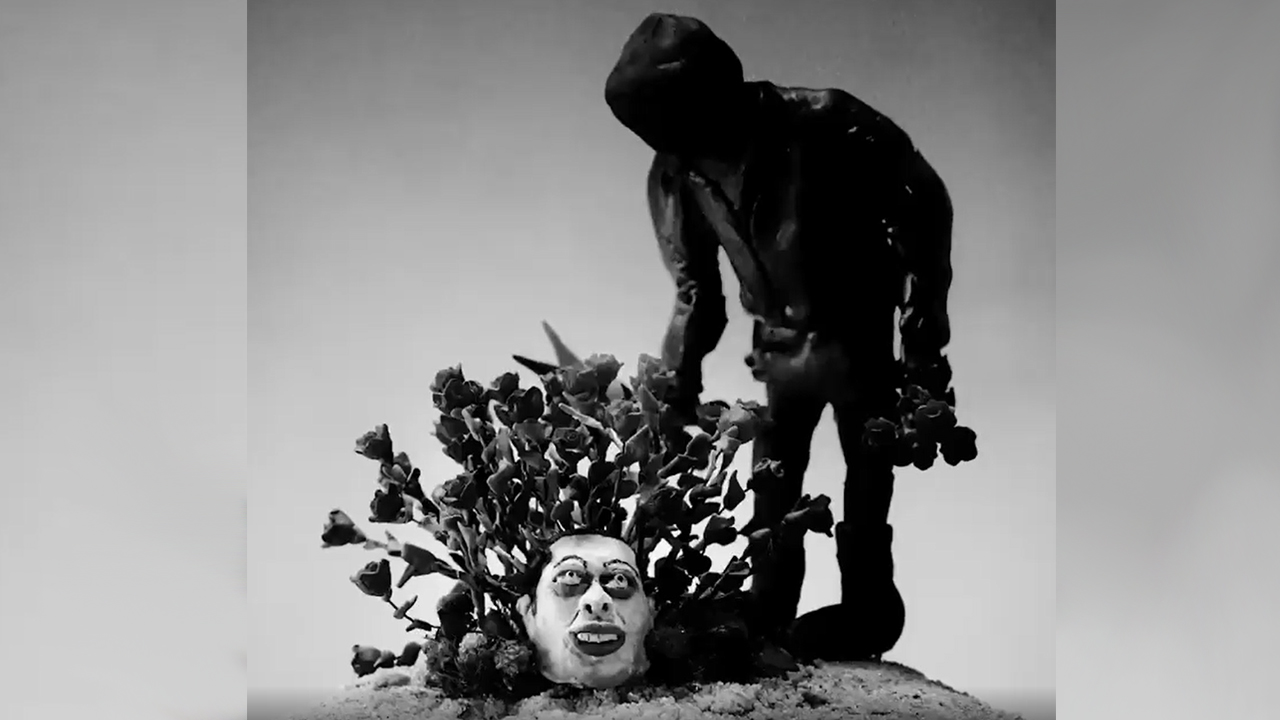 Kanye West did it again. He got a lot of people confused and riled up. In a creepy video centered around the theme of death, Kanye kidnaps and buries Pete Davidson. Also, there’s a church burning. What is the meaning of all this? Is Kanye West mentally unstable? Or is he a genius who’s ahead of his time?

Some answers can be found in jeen-yuhs – a Netflix documentary about Kanye’s life and career which spans over 20 years. Mainly consisting of raw footage filmed by Coodie, a friend of Kanye who has been following him since the beginning of his career, jeen-yuhs provides a rare window into Kanye’s day-to-day reality. After watching all three episodes, one fact becomes obvious: Kanye’s mother was extremely important to him and her untimely death traumatized him.

Donda’s unexpected death in 2007 after undergoing plastic surgery marked a turning point in Kanye’s life. The documentary makes it obvious that Donda helped keep Kanye grounded and focused on Christian values. After her death, Kanye got tangled tightly in the occult elite’s sick industry, even ending up in the Kardashian’s bubbling cauldron.

For years, rumors have circulated about Donda being the blood sacrifice required by the elite for Kanye to reach the higher-ups of the music industry. In a 2015 interview with Q Magazine, Kanye was asked what he sacrificed for success. His answer: “My mom”. He added:

“If I had never moved to L.A. she’d be alive. I don’t want to go far into it because it will bring me to tears.”

In 2016, Kanye was handcuffed and forcibly hospitalized in “involuntary psychiatric commitment”. After months of recovery, characterized by memory loss and heavy medication, Kanye claimed that he had emerged from the “sunken place”. In short, everything about this episode reeked of Monarch programming, an offshoot of MKULTRA.

In short, Kanye has seen the dark side of the music industry. While he might be trying to break out of it, he is also deeply tainted by it. 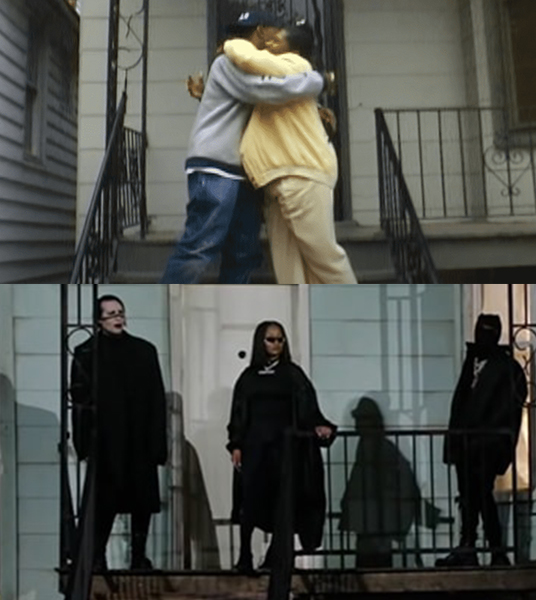 Top: A screenshot from jeen-yuhs where Kanye hugs his mother on the front porch of their house. Bottom: A screenshot from the Donda listening party (2021) where industry creeps such as Marilyn Manson walk around a replica of Kanye’s childhood home.

The two pictures above the sad evolution of Kanye’s life. His mother’s love, warmth, and goodness were replaced by the industry’s hate, coldness, and evil. 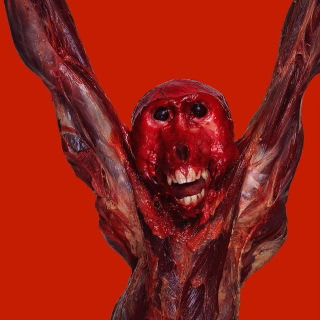 The cover art of EAZY: A skinned monkey on a blood-red background.

This upsetting picture was taken by fashion photographer Nick Knight in 1997. This is what he had to say about the picture:

These corpses of skinned animals had nothing of life left in them, not even the most tiny speck or hint of their former beauty, majesty and purpose. However, they were not inhabited by death in the way they had been by life. Once the life had gone, they were just bags of barely held together of flesh, bone and sinew. Nothing left, except their smell; they stank. They reeked. Every time, for years afterwards when I looked at the 10 by 8 transparencies, the stench came straight back to me as pungent as if each image was saturated with it. That, I concluded was death.

This is all rather messed up and disgusting. However, the picture perfectly fits with the main theme of the EAZY video: Death. 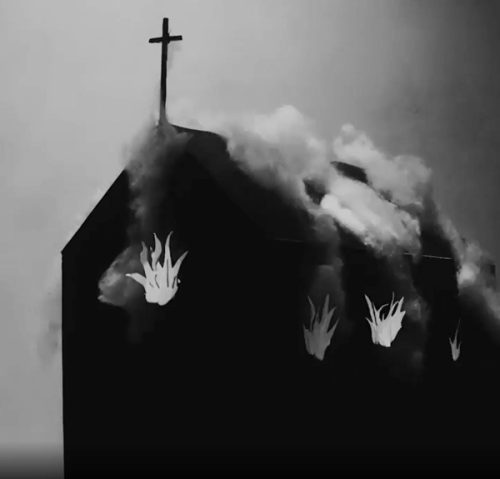 The video begins with a church burning.

Considering the fact that Kanye has been outspoken about Christianity in the past years (he’s been literally conducting Sunday services), what does the burning church represent? Some lines in his verse express the fact that the sentiments in this song are rather un-Christian. 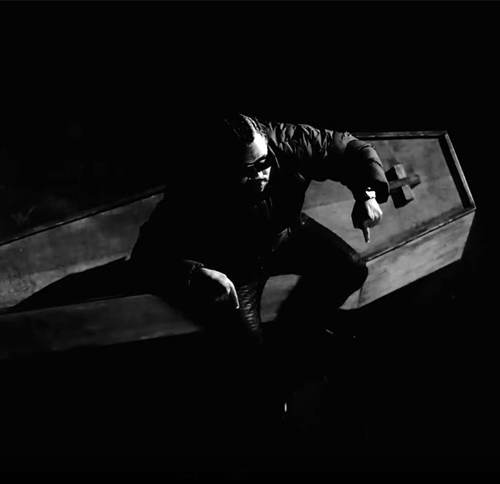 The Game emerges from a casket and raps while sitting on it. Death is the central theme in the video.

Then, Kanye appears. Or maybe his alter-persona. 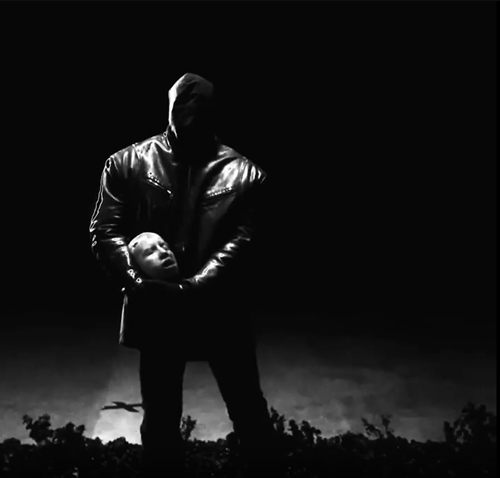 Kanye’s face is covered as he holds a severed head: MK symbolism referring to the suppression of the core persona and the activation of an alter persona.

In the past months, Kanye has been seen walking around in public with creepy masks and strange “punishment haircuts”. All of this strangeness points to mind control.

This creepy version of Kanye is really mad at Pete Davidson – the new boyfriend of Kim Kardashian. 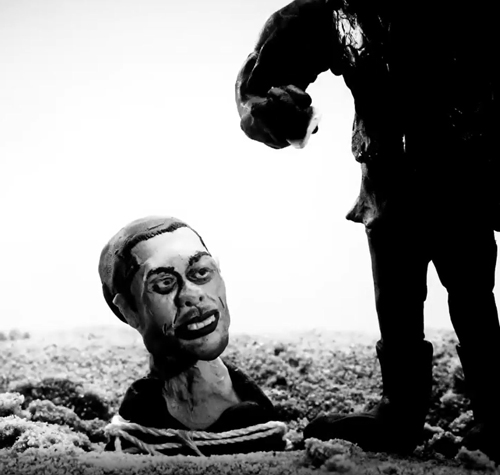 Kanye kidnaps Pete Davidson and buries him up to his head.

Before going further, we need to look into the weird Pete Davidson drama. 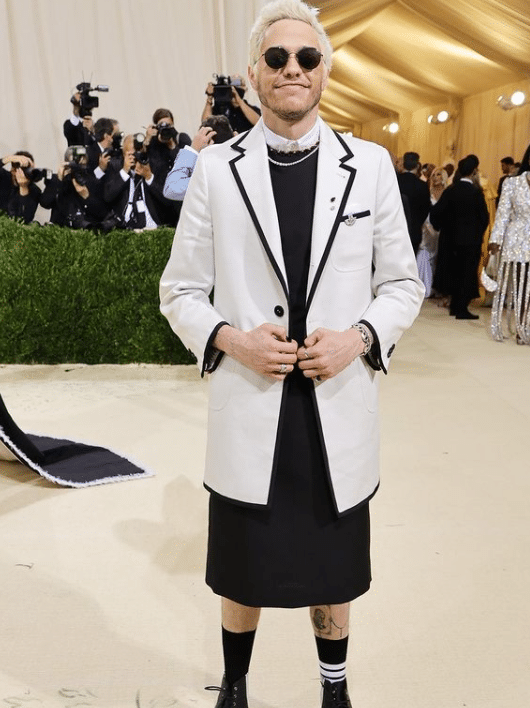 Pete Davidson at the 2021 MET Gala – the event where occult elite pawns parade around in symbolic and often humiliating outfits. He is wearing women’s clothes to please his elite masters.

Pete Davidson is a strange presence in the entertainment industry. Throughout the years, he dated several famous women and most of them share the same profile: They’re all deep in the industry, often since a young age.

For instance, Davidson dated Cazzie David, the daughter of Larry David – the creator of the hit shows Seinfeld and Curb Your Enthusiasm. Then, he famously dated Ariana Grande who is an ex-Disney child star turned industry pawn. Then, he dated Margaret Qualley, the daughter of famed actress Andie MacDowell. Then he went out with a very young Kaia Gerber – the daughter of supermodel Cindy Crawford. In short, Davidson is an “industry insider” who navigates from one high-profile relationship to another.

Kim Kardashian’s relationship with Davidson became public shortly after the deadly Astroworld fiasco. That disastrous event starred Travis Scott (the boyfriend of Kylie Jenner) and ended up being a PR nightmare for the Kardashian clan. Rumors quickly emerged that the Kim Kardashian/Pete Davidson relationship was “fake” and a diversion from Astroworld. Kanye also believes so.

Kim’s relationship with Pete Davidson appears to be custom-made to drive Kanye crazy. In a January 2022 interview, Ye revealed that he was stopped from entering Kardashian’s home to visit his kids by security because Davidson was in the house.

Noncustodial dad, I bought the house next door
What you think the point of really bein’ rich for?

Usually, a “noncustodial parent” does not have legal physical custody over their child resulting from a court order. While this information was never officially released to the public, Kanye strongly implies that he’s been cut off from his children. However, he truly bought the house next door to the Kardashians. Because that’s the point of being rich.

So, in EAZY, Davidson is buried up to his head. Kanye then sprinkles some rose seeds on Pete and waters him thoroughly. 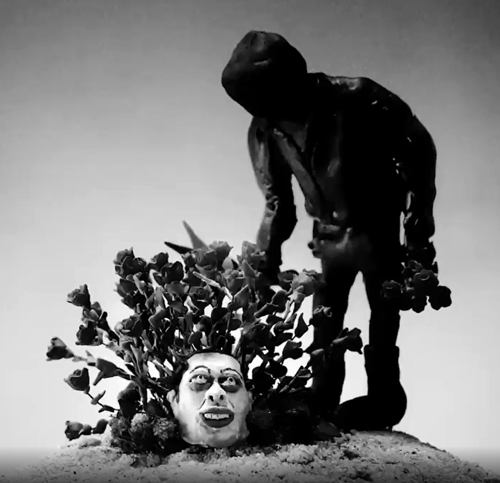 Kanye comes back to Davidson (who is presumed dead) and picks the flowers. 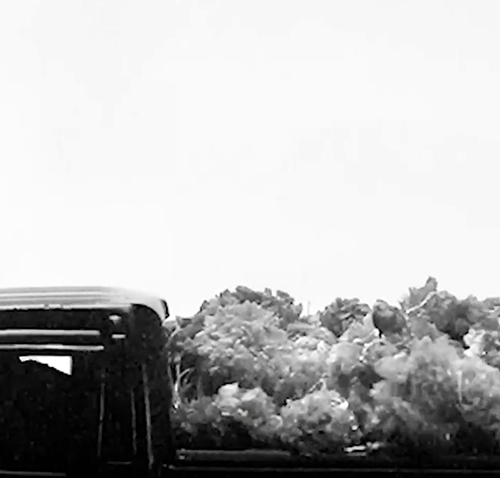 The flowers are then loaded on a truck.

That scene actually happened in real life a few weeks prior to the release of the video. 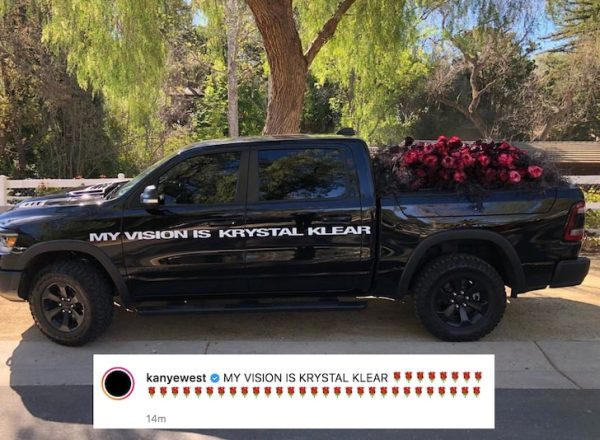 On Valentine’s day, Kanye sent a truck full of roses to Kim.

Upon watching the video, the roses take on a creepy meaning: The roses actually grew from Pete Davidson’s rotting corpse. So romantic.

While Davidson is being abused in the video, Kanye raps:

And my new b*tch bad
I know Illuminati mad

Kanye believes that the Illuminati (aka the occult elite) is “mad” at him and is trying to destroy him. Is it because he accused Kris Jenner of pimping her daughters and the Kardashians of trying to destroy him? Is it because he’s been outspoken about Christianity and conservative values? In a recent Instagram post (which was later deleted), Kanye explains the conspiracy against him which involves Pete Davidson (whom Kanye derogatorily calls “Skete”). 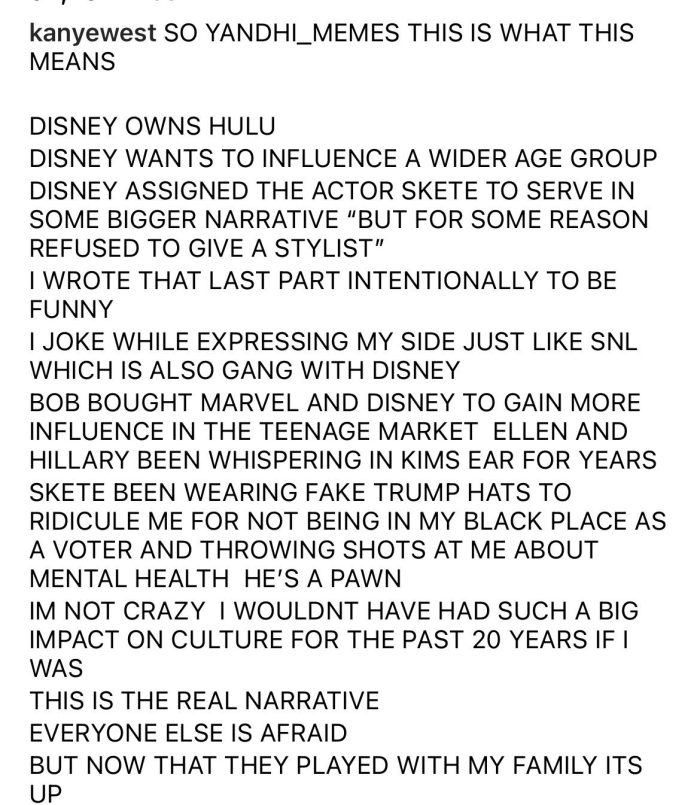 In EAZY, after his line about “Illuminati mad”, Kanye raps: 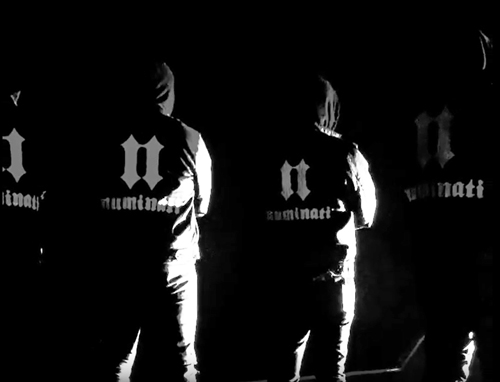 What is Numinati? The name appears to combine the words “new” and “Illuminati”. Is it some sort of anti-Illuminati collective of artists? Is it simply a clothing brand? Not quite sure yet. However, The Game (who raps the first verse on EAZY) posted this on Instagram: 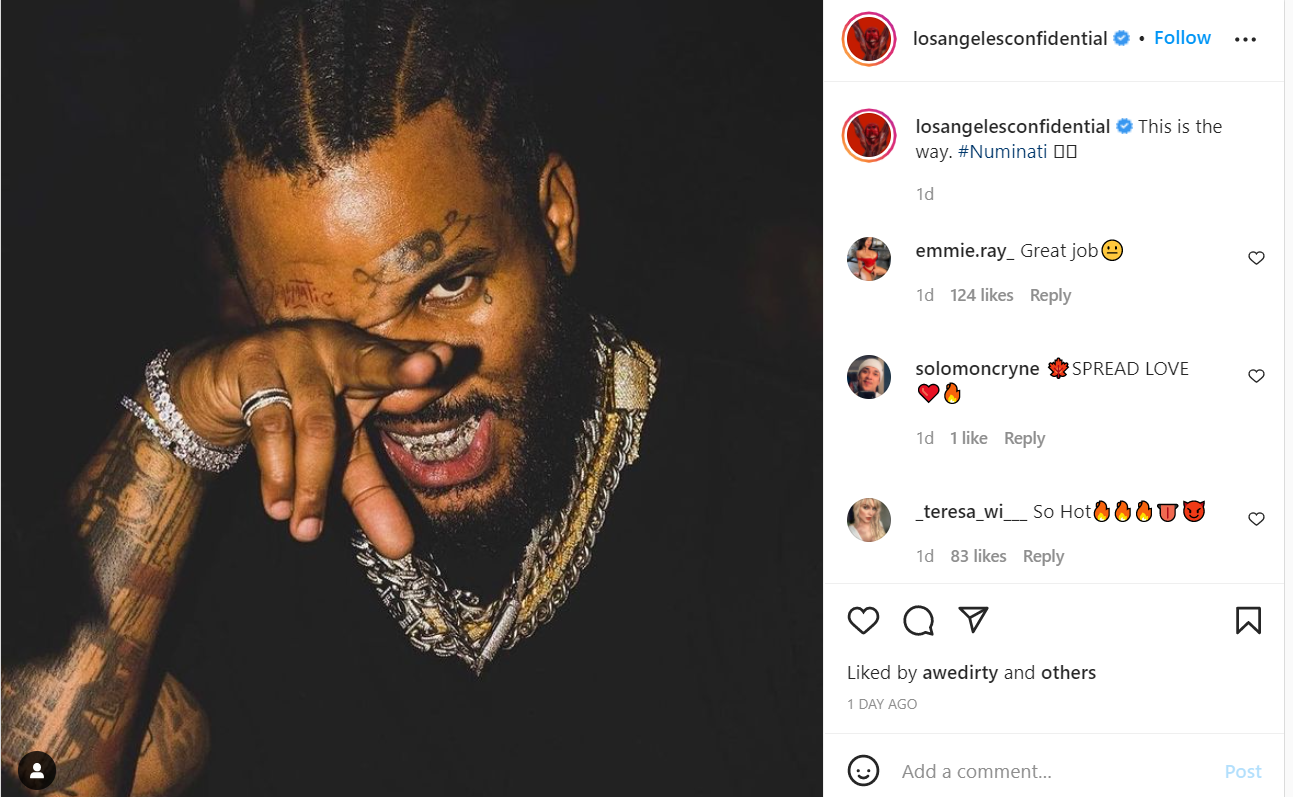 The Game writes “This is the way #Numinati”… while hiding one eye. There’s nothing “nu” about any of this. That one-eye sign OLDminati.

The EAZY video ends with text saying “Everyone lived happily ever after”. 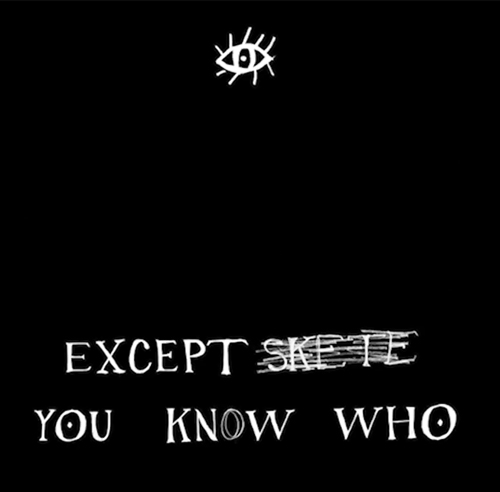 … except for Skete. There’s an all-seeing eye at the top of this frame. It is a way of telling us that this bizarre drama is filled with occult elite madness?

The video ends with another frame saying “JK He’s fine”. This did not prevent a slew of celebrities from being angry about the vaguely threatening message of this video. Yup, Kanye did it again, he got a bunch of people riled up. Mostly himself.

Throughout the years, I’ve published numerous articles about Kanye because he’s a clear example of a male artist tangled in the dark side of the music industry. From his mother’s wholesome values to the demonic influence of the occult elite, there’s a duality in Kanye – an internal struggle – that is constantly prevalent in everything he does. Part of his work appears to be rebelling against the elite while another part is completely in line with it.

Indeed, while Kanye inherited his mother’s Christian faith, his dealings with the occult elite birthed in him a twisted and mutated version of Christianity that was expressed in the album Donda.

EAZY is a continuation of this theme. While he talks about making the “Illuminati mad”, EAZY is nevertheless drenched in the dark energy of the occult elite.

While Kanye believes that he’s not an industry puppet, I can still see strings attached to him. Cut them off Kanye!

The Dark Occult Message of The Weeknd’s Video “Sacrifice”