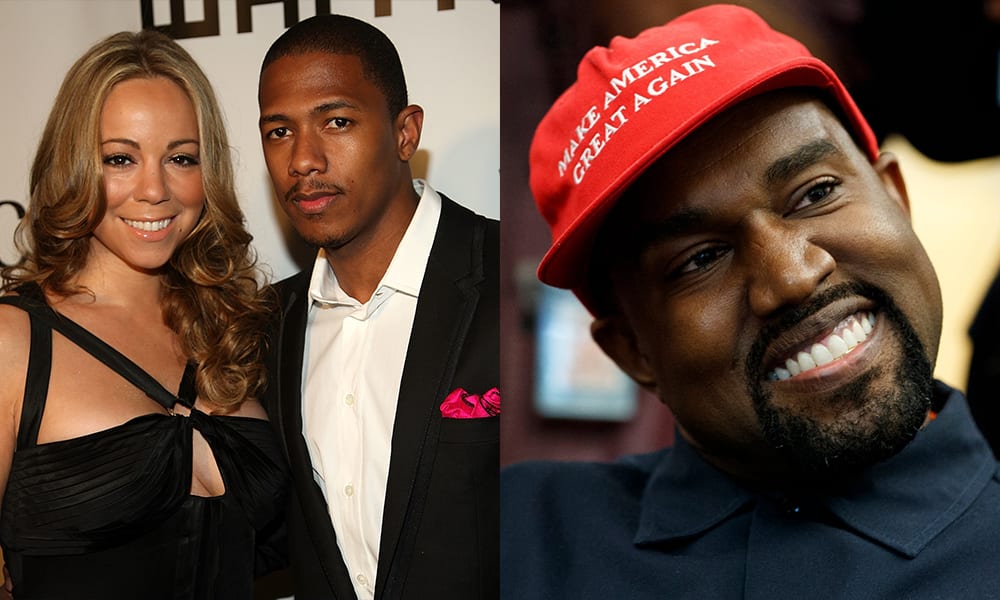 Kanye West is the latest in a long list of celebrities under mass media microscope following a severe mental breakdown. In Kanye’s case, things are taking a larger social-political dimension as he’s a rare celebrity openly supporting President Trump. And Trump welcomed this support with open arms. Literally. 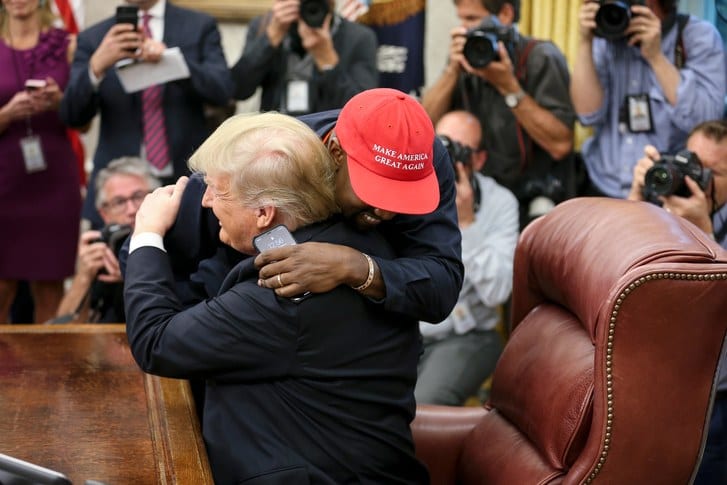 Kanye’s visit at the Oval Office on October 11th.

Rapper TI, who worked with Kanye in past, lashed out on social media:

“This is my stop, I’m officially DONE!!!! [F—] Trump & his Lil Cookie Boy. At one time it was a pleasure to work alongside you. Now, I’m ashamed to have ever been associated with you.This is the most repulsive, disgraceful, embarrassing act of desperation & auctioning off of one’s soul to gain power I’ve ever seen. You ass kissing and boot licking on a whole new level & I refuse to associate myself with something so vile, weak, & inconsiderate to the effect this has on the greater good of ALL OUR PEOPLE!!!!”

TI also released a video of him sitting in the Oval Office while a Melania Trump lookalike stripped for him. 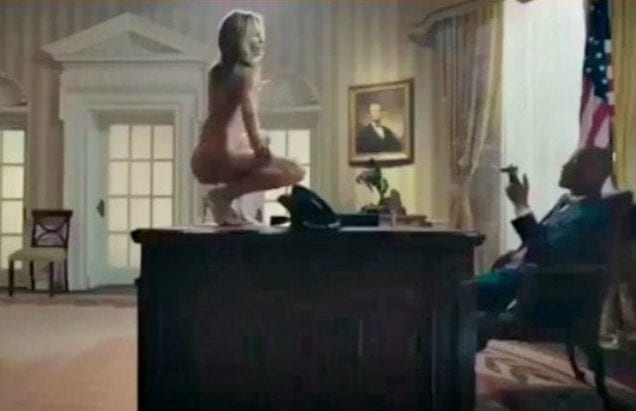 The backlash against Kanye also extended to the press.

Some believe that Kanye’s support for Trump is the result of him being mentally unstable. Rapper and TV host Nick Cannon took things further by alluding to MKULTRA.

Following Kanye’s visit to the White House, Nick Cannon posted a rather incisive tweet implying that Kanye is under mind control. 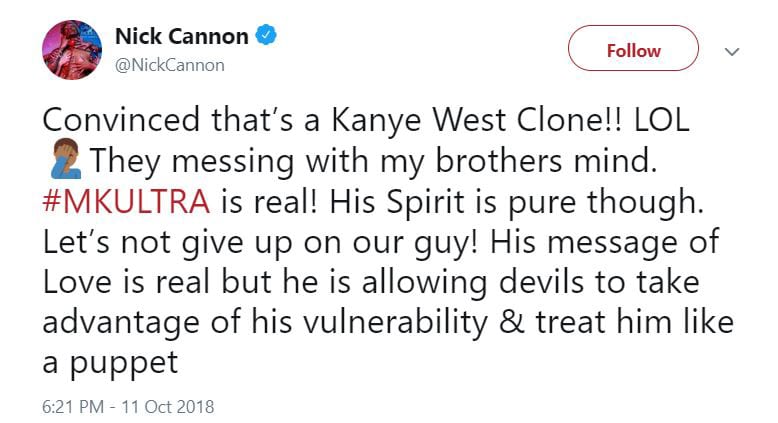 While one could dismiss this tweet as yet another celebrity rambling on social media, Nick Cannon’s case is different: He knows things. Indeed, Cannon was married for eight years to one of the most blatant examples of industry mind control: Mariah Carey. 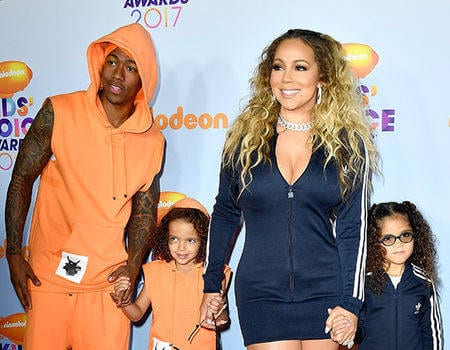 Nick Cannon with Mariah Carey and his twins at the Kid’s Choice Awards.

Mariah Carey’s story is a typical example of industry mind control. In 1993, at age 23, Mariah got married to Tommy Mottola, the President of Sony Music. While Mariah skyrocketed to the top of the charts, her tumultuous relationship with Mottola – who was more of an MK handler than a husband – took a severe toll on her mental well being. Indeed, Motolla controlled every aspect of Mariah’s personal and professional life. He monitored her every move and kept her cloistered in a mansion she ended up calling “Sing Sing” (the name of a maximum security prison in NY).

“And Tommy Mottola is a devil!

I’m not supposed to say what I’m going to say right now, but I have let you know this. Please don’t videotape what I am going to say, ok? Turn that off please. Do it, do it, I don’t mind! Tape it!

Mariah Carey, after divorcing Tommy, came to me crying. Crying. She was crying so badly I had to hold her. She said to me, “This is an evil man, and Michael, this man follows me.” He taps her phones, and he’s very, very evil. She doesn’t trust him. He’s a horrible human being. And we have to continue our drive until he is terminated. We can’t allow him to do this to great artists, we just can’t.”

Is it a coincidence that everything surrounding Mariah during those years involved Monarch butterflies – the main symbol of Monarch mind control?

The album art of Mariah’s album “Butterfly”, released in 1997 (a year prior to her divorce with Motolla).

In the years following the Motolla divorce, Mariah went through a mental breakdown, which often happens after years of trauma-based mind control. Not unlike Britney Spears and others, the breakdown began with “erratic behavior”.

On July 21st, 2001, Carey made a bizarre appearance at the Carson Daly show, which is now infamously referred to as the “Ice Cream Meltdown”. It began with Mariah pushing an ice cream cart while wearing a large men’s shirt. She then stripped it off and asked Carson Daly to “kidnap her”. She then talked about how she needed therapy and that “she wasn’t seeing any money in the bank”. Daly, visibly shaken announced: ‘

“Ladies and gentlemen, Mariah Carey has lost her mind.”

”I don’t know what’s going on with my life”

A few days later she was hospitalized for 14 days.

“On July 26, she was suddenly hospitalized, citing “extreme exhaustion” and a “physical and emotional breakdown. Carey was admitted to an undisclosed hospital in Connecticut, and remained hospitalized and under doctor’s care for two weeks, followed by an extended absence from the public.”
– Wikipedia, Mariah Carey

Carey was hospitalized for the same reason as Kanye and remained under “doctor’s care” for about the same period of time at the “undisclosed hospital”. Today, Mariah is officially diagnosed with the same mental issue as Kanye: Bipolar disorder.

Nick Cannon was married to Mariah between 2008 and 2016. During this period, she exhibited the typical behavior of an MK slave post-breakdown: “Out of it” and heavily medicated. If someone can attest that MKULTRA is real, it is Nick Cannon.

On November 20th 2016, Kanye was handcuffed and rushed to the UCLA Medical Center where he spent ten days under medical care.

While the official diagnosis was “temporary psychosis” due to dehydration and sleep deprivation, revelations made by people close to Kanye implied a much graver problem. Indeed, more than three months after Kanye’s released from the hospital, long-time collaborator Malik Yussef revealed during an interview that his “memory was coming back”. Yussef told Popsugar:

“I’ve been to his house sat down with him for about six, seven hours, just walking through his health and recovery. His memory is coming back, which is super good. [He’s] just healing, spending time with his family.”

So Yussef indicated that, following his forced hospitalization, Kanye suffered from severe memory loss and that, three months after, has not yet fully recovered. Considering these facts, one can naturally ask: What actually happened during these ten days at the hospital and what could cause such a prolonged memory loss?

Here is something to consider: The main tool of trauma-based mind control is electroshock therapy (ECT) and the primary side effect of ECT is memory loss.

Another fact to consider: Kanye received these “treatments” at the same facility where Britney Spears and Amanda Bynes were rushed to on “psychiatric hold” during their own MKULTRA-style breakdowns. 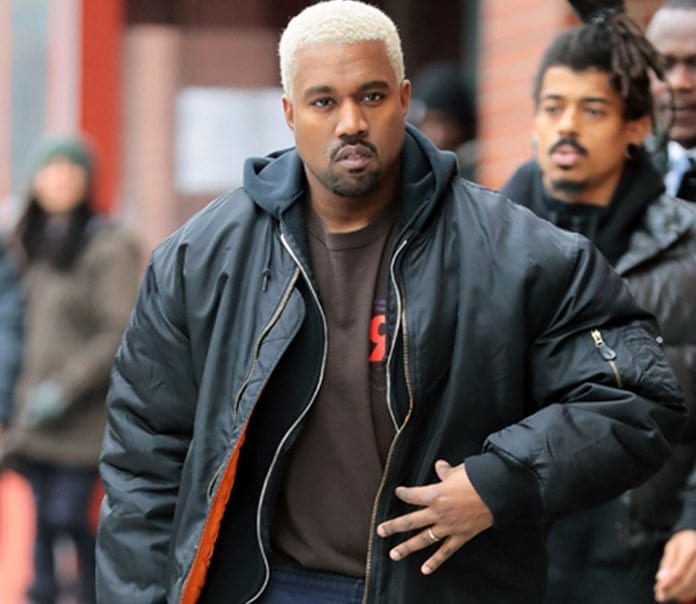 Out of the Sunken Place?

In 2018, Kanye re-emerged in the public space, claiming he was “out of the sunken place“.

The expression “sunken place” comes from the 2017 movie Get Out and refers to the main character’s state of dissociation after being hypnotized by a woman using past trauma. 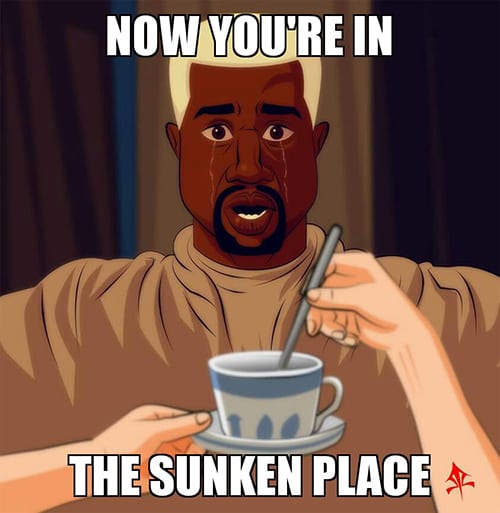 Memes about Kanye being in the “Sunken Place” emerged after he was accused of being under the control of white people for supporting Trump.

Kanye (who now goes by Ye) posted on Twitter several cryptic videos entitled “Mind Control”. In the last video of the series, he speaks against the mind control of social and mass media and its “bigger agenda”. 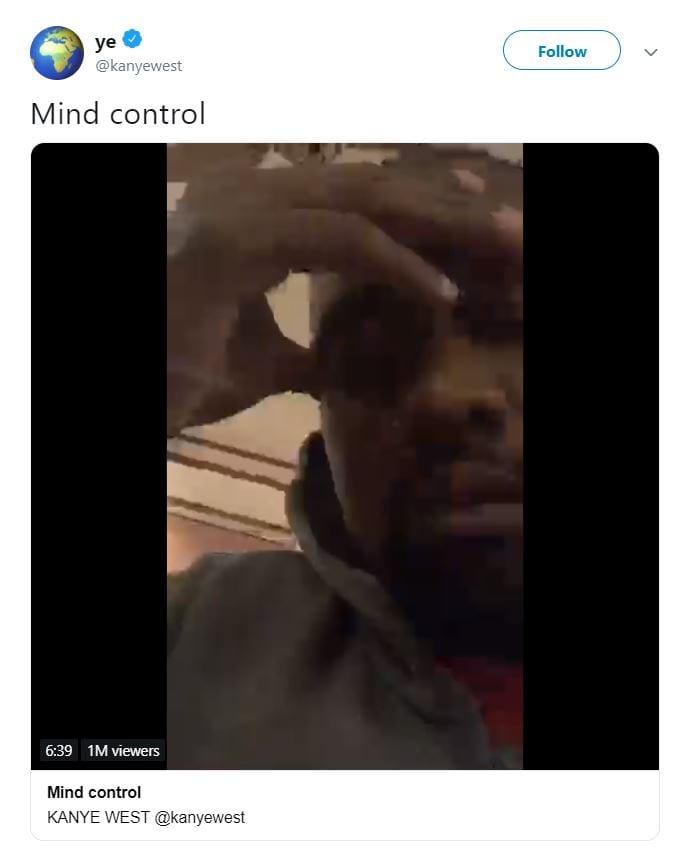 So, is Ye still under mind control? Is he being controlled by – as Nick Cannon puts it – “devils” who are “using him as a puppet”? On Twitter, many disagreed with Cannon’s assessment.

Is it possible that Ye actually broke programming? Did he witness first hand the dark side of the industry and is now taking a stand against it? Is Ye simply a contrarian? It might be a mix of everything. I am not even sure if Ye actually knows the exact answer. However, I am sure of this: Ye went through something dark and disturbing during his hospitalization and came out a changed person. And those behind this are the true “devils”.

Co-Founder of Tween YouTube Channel Arrested for Molesting a Minor