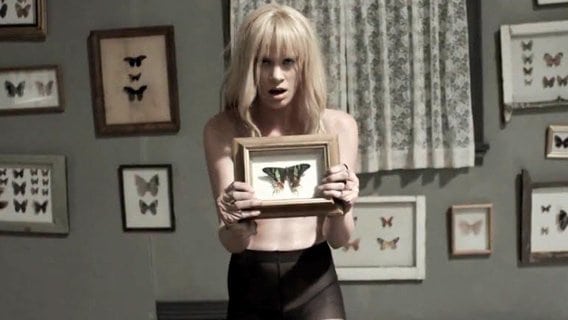 The viral video Fjögur Píanó has been viewed several million times, but not many understand what it is truly about. While there is a great deal of mystery about the video, one thing is certain: There is a lot of mind control symbolism in the video. We’ll look at the hidden meaning behind Fjögur Píanó.

Watching Fjögur Píanó is a strange experience. There’s Shia Leboeuf and some girl naked, there’s weird piano playing in the background and a whole lot of butterflies. There’s some dancing, some fighting, and lollipops with little scorpions inside. What the hell is going on? And why? I won’t claim that this article will fully decode this head-scratcher, but a lot of its symbolism strongly hints towards a specific concept: Monarch Mind Control. While this video is unique and original (unlike many of the videos analyzed on this site), it nevertheless contains many classic elements of Monarch mind-control symbolism (if you are unfamiliar with Monarch Mind Control, read the article entitled Origins and Techniques of Monarch Mind Control first). When these symbols are decoded, the story starts to make a little more sense and an underlying message begins to surface

Fjögur Píanó is part of the series of videos accompanying the new album from the Icelandic band Sigur Rós. The band asked a dozen filmmakers to each choose a song from its album, Valtari, and shoot a video inspired by the music. All the directors received the same $10,000 budget and “zero instructions from the band”.  Probably due to its high profile cast and unexpected nudity, Fjögur Píanó quickly became a viral sensation, garnering media attention and millions of views across the web.

The video was directed by Alma Har’el, an Israeli filmmaker, who is known for directing music videos for several bands, as well as TV spots for Obama’s first presidential campaign in 2008. Contrarily to her TV commercials, Har’el’s work for Fjögur Píanó is strange, disturbing and difficult to comprehend. While it is somewhat impossible to extract a coherent narrative from the video, understanding some of its symbolism helps make sense of it. While some might interpret the video as being about difficult relationships, there are elements that seem to allude to something deeper and more disturbing. For example, why are there “outside people” controlling the main characters’ environment? Let’s look at the scenes of the short video.

Right from the start, it is evident that the couple featured in this video is very confused, not in control of their destiny and trapped in a very restrained world. 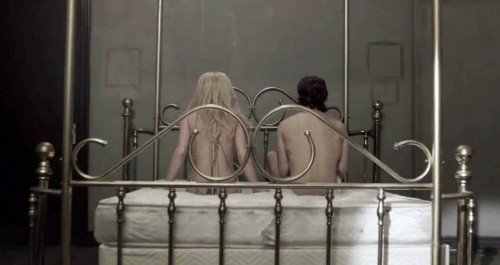 The couple wakes up dazed and confused in a room that used to have frames hanged on the wall.

Shia and his girlfriend (played by Denna Thomsen) wake up with all kinds of bruises and marks on their bodies, but they do not seem to remember why. Obviously, a lot of abuse and violence happened to them the day before. 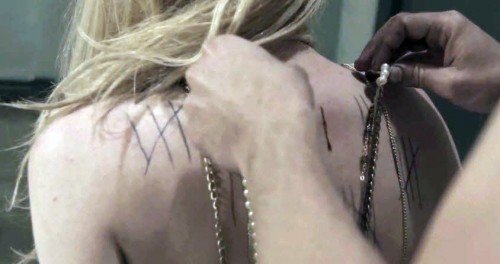 After waking up, Shia sees tally marks on Denna’s back, similar to those used by prisoners to count days behind bars. This suggests both individuals are in a state of forced confinement, and the “prison” is apparently their own bodies.

The couple then engages in a choreographed dance that alludes to sexuality mixed with dominance and violence. 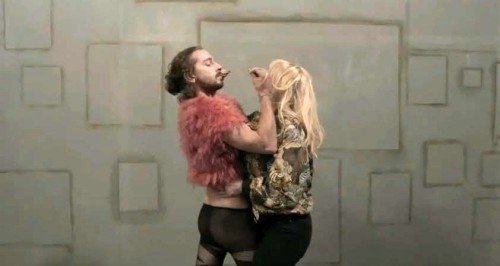 While dancing, Shia and Denna are wearing each other’s clothes. In Mind Control, the occult concept of the union of opposites is extremely important and used during programming. Are Shia and Denna actually two sides of the same person?

At the end of the dance, Shia and Denna perform a symbolic gesture: They “remove” their faces with their hand and then “let them go”. The concept of removing faces or masks is used in actual mind-control programming to represent the removal and subsequent replacement of the core persona with alter personas. In the context of the video, there is a definite sense of the loss and confusion of identity between the two. They might even be two opposite sides of the same person.

After the dance, two strange dudes enter the room and give the couple suspicious-looking lollipops with scorpions inside. Since scorpions are known to be venomous insects, there is a reason to believe that these lollipops aren’t simply pieces of candy but most probably mind-altering drugs, such as those used in mind-control programming. The couple eagerly sucks on these lollipops, indicating that they are helplessly addicted to them. 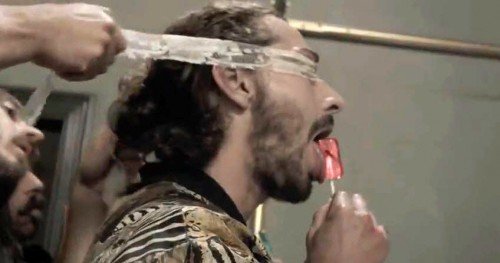 Distracted by the candy given by his handlers, Shia doesn’t seem to realize that he is being blindfolded and taken for a ride.

Simply by blowing on them, the handlers are able to get the couple to go where they want it to go. The fact that no physical contact is necessary to control the couple implies that it is all about … mind control. 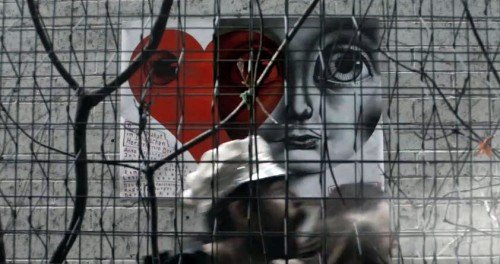 While the handlers are taking the couple to another location, the camera focuses on an image featuring the one-eye sign along with a hole in a heart – symbols associated with and used in Monarch programming.

The couple is ushered into a car where they take a “virtual” ride, with one of the handler in the driver’s seat. 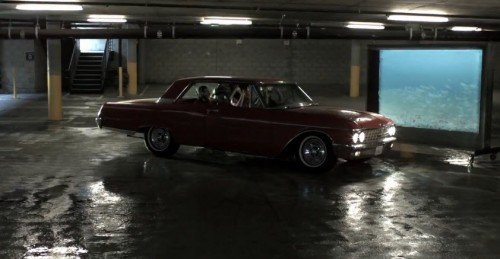 The car is not moving but images projected on a screen give the impression they are going to exotic places. This is reminiscent of the concept of dissociation in mind control, the process of causing the mind control subject to disconnect from reality, mentally transporting somewhere without ever actually moving. 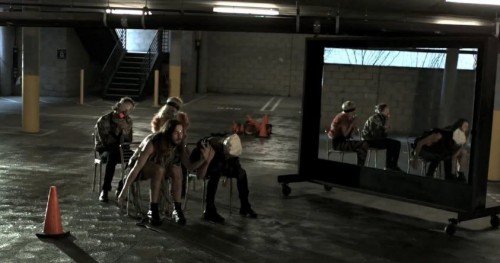 In another scene, there isn’t even a car.  In other words, it is all about illusion. The “ride” is actually happening in the minds of the victims and the handlers (in MK, handlers are often under mind control as well). 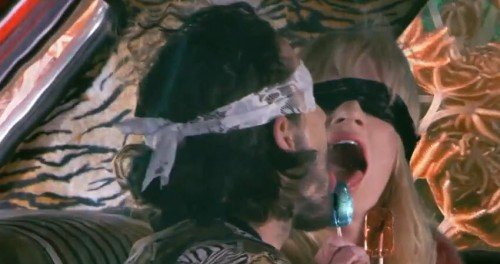 Inside the car, the couple is completely obsessed with the lollipops, licking them in a lascivious and sexual way. The animal prints on Shia’s clothing and inside the car hint to Beta (also known as Sex Kitten) Programming. In this type of programming, MK slaves are often given libido-inducing drugs.

Back in the Room

After the psychedelic ride, the couple is taken back to their room. The empty walls are now filled with frames containing dead butterflies, a sight that visibly disturbs the couple. After the buzz of the drugs, harsh reality settles in and the couple appears to have a rare moment of lucidity. 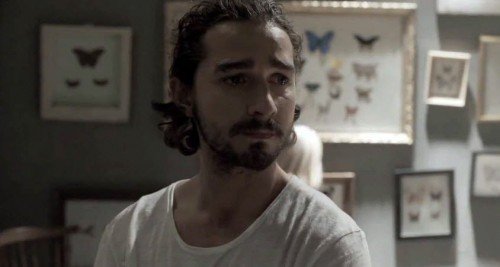 Shia is extremely concerned about the butterflies on the wall. These are not there simply for mere decoration – they represent something dark in profound. Perhaps they remind them of their state of mind control?

The couple then gets sexy and sensual, but Shia appears to be obsessed with a specific face, which he draws on Denna’s body. He then draws the face on cardboard.

As if to confirm the fact that Denna is a split from Shia’s personality created by his handlers, Denna immediately shows what she truly is. 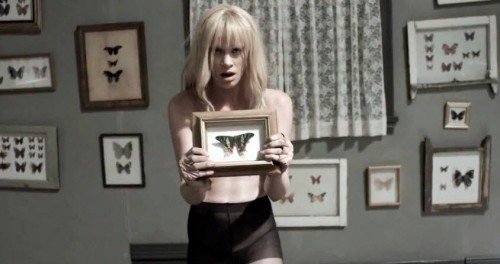 Denna takes a butterfly frame from the wall and shows it to Shia, as if saying “Look, this is what is happening to us. We are under mind control!”.

Shia then appears extremely confused, going from tears to laughter to anger. Obviously not happy about whatever Denna has told him, he breaks the butterfly frame. At this point, Denna apparently disappears and Shia is alone with himself – another hint pointing to the fact that she’s part of his split personality. He then does something that is found in almost every single mind-control themed video: 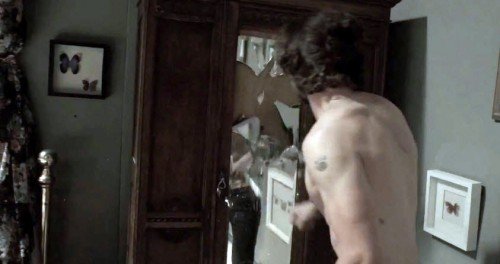 Shia breaks a mirror, a symbolic image that represents his attempt to break from his programming. If you’ve read other articles on this site, you know that this gesture is almost inevitably found in fiction relating to mind control.

After destroying his room, Shia turns finds his girlfriend again (or the opposite side of himself) and starts hitting her. 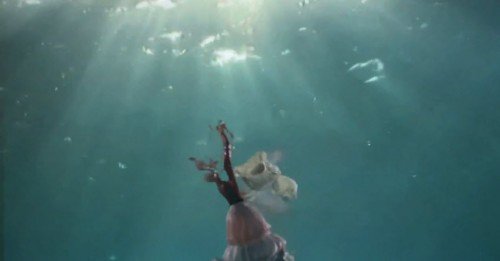 As the couple fight, a scene shows a porcelain doll being broken with blood coming out of it. In mind-control programming, slaves are often depicted as dolls or puppets, which represent their powerlessness against their handlers.

After the fight, Shia adds a tally mark on Denna’s back – another day as a mind control slave. Exhausted, they fall asleep. 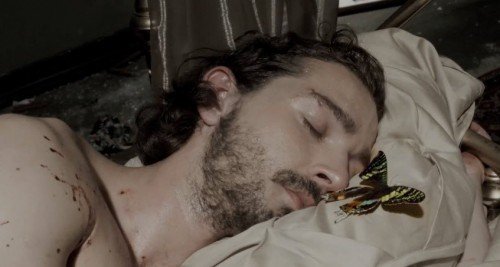 Shia sleeps next to the same butterfly he woke up with. Despite all of his efforts, he is still under Monarch Programming.

The handlers then come into the room to clean it up and to remove the frames from the wall, leaving it in the same state it was the morning before. The couple then wakes up in the same way they did before, with the same bruises and scars. They start another day in the never-ending, mind-numbing loop that is the life of a mind-controlled slave.

Fjögur Píanó is a cryptic and strange video that has been described as a “dream sequence without a narrative” by some critics. However, by decoding some of the video’s symbolism, we discover that there is a story being told, one that is told in a very figurative fashion. The “official” explanation of the video states that it is about a difficult relationship and the many butterflies represent “beautiful things that die fast”. While this might explain some aspects of the video, there are other elements that cannot be ignored. The couple is obviously living in a state of virtual imprisonment, where every aspect of their lives are manipulated by outside forces: Shia and Denna’s living environment is controlled and modified by the handlers; they are drugged, blindfolded and forcibly taken on weird, dissociative trips; and their attempts to break free are useless. In short, the couple is utterly powerless versus the world around them – the only thing they can do is add another tally mark on Denna’s back.

In a somewhat hip, artistic and fashionable matter, Fjögur Píanó tells the story of mind-control slaves. While many have applauded the video’s “genius”, most have not understood its underlying meaning. In the end, viewers watching the video are like the couple in Fjögur Píanó: Taken for a ride, without any idea where they are being taken.

B.O.B. and Nicki Minaj’s “Out of My Mind” or How to Make Mind Control Entertaining