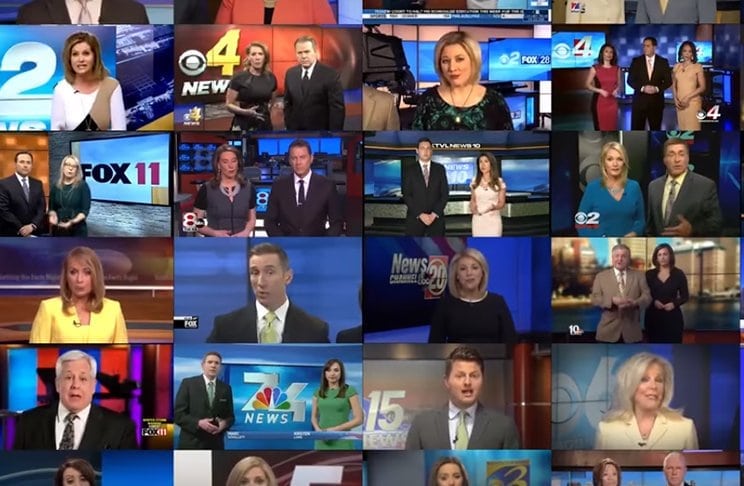 A video compilation proving that countless local news networks read the same exact scripts around the United States is a chilling reminder of the Orwellian, heavily controlled nature of mass media. Even more chilling: The media coverage of this video.

Yes, what is happening in this video is indeed “extremely dangerous to our democracy”. The viral video, posted online by Deadspin, mashes together segments from a variety of television stations owned by Sinclair Broadcast Group – the largest television station operator in the United States. Dozens of newscasters, reduced to the state of word-parroting drones, are seen reciting the same script, one that obviously came from “above”. The creepy, Orwellian vibe emanating from the video and its clever editing clearly highlights the fact that mass media is owned by a few mega-companies.

In a twist of irony, the script read by the newscasters ominously warns viewers about “fake and biased news circulating on social media”, the same way Big Brother frowns against “thoughtcrime” in Orwell’s 1984.

While the video highlights the propaganda function of mass media, it was spun by mass media to generate … propaganda.

Shortly after the video went viral, major news outlets responded with engineered outrage and disgust. It did not take long before the blame was put on Sinclair, a “conservative, pro-Trump media conglomerate”.

A headline about the video using the words “pro-Trump” and “conservative” to deflect the true nature of the problem.

A CNN headline about the compilation video.

Superstar newscaster Dan Rather published an angry tweet about the video. 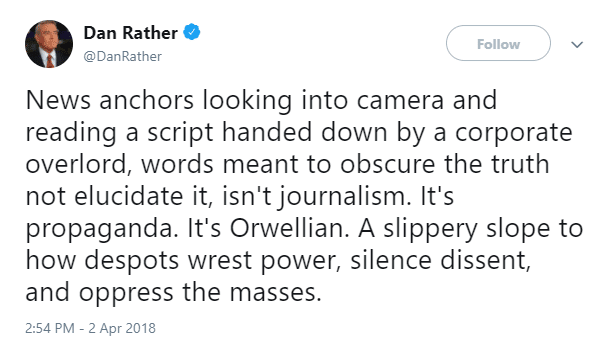 The video, which highlights a major problem that is rampant across all mass media, is used to attack one specific company: Sinclair Broadcast Group. CNN is already reporting that Kentucky Democrat candidate Amy McGrath is pulling ads from Sinclair stations and is calling for a boycott. Is Sinclair the only company guilty of such news tampering? Of course not.

The fact that media sources are attempting to frame this issue in a liberal vs conservative debate only highlights the mediocrity, the lack of objectivity and the complete bias of modern journalism. If journalists were actually about “unbiased” facts, they would point out that all media sources are owned by a handful of conglomerates which are connected to the same world elite.

Not About Liberals vs Conservatives

If one closely watches the above video, one can easily note that the same script was read on CBS, ABC, NBC, and FOX networks. That means it was read on EVERY major television network in the United States, and these stations are owned by mega companies that are represented in elite organizations such as the Council on Foreign Relations, the Bilderberg group and so forth. NBC is owned by Comcast; CBS is owned by Viacom; ABC is owned by the Walt Disney Company; Fox TV stations are owned by 21st Century Fox which was sold to … the Walt Disney Company.

The fact that the local news are scripted from above is far from new. This has been happening for decades. Here are a few examples from several years ago.

Mass media is currently spinning the story in order to turn it into a political debate and to attack one specific company.

By doing so, it purposely ignores the core truth about the video. The news segment was about not trusting “fake news on social media”. Mass media created the term “fake news” to censor and suppress real, factual news that go against the elite’s interests and that reveal unflattering truths (i.e. pedogate).

In recent years, a growing number of people have been learning important facts through “alternative” news. This has struck the elite with intense fear and panic, causing it to use all of its mass media control to deliver Orwellian warnings about “fake news”. This is what the newscasters were forced to recite on the news. This is not about liberals versus conservatives. This is about truth-seeking journalism versus elite-sponsored propaganda.

Related Topics:newsvideoviral videos
Up Next