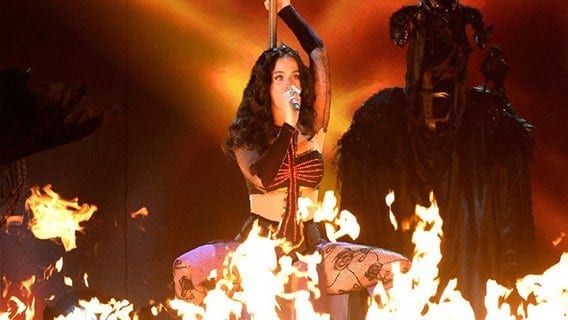 This year’s Grammy Awards apparently had something for everyone. While old-school rockers might have enjoyed seeing Paul McCartney, Ringo Starr, Willie Nelson and Metallica performing live, it is the current industry puppets who reach the youth. And it is their performances that are riddled with symbolism and messages. Unlike the older singers, the performances given by Beyoncé, Katy Perry, and even Macklemore, were not strictly about the music. Their performances were vehicles to push the Illuminati-sponsored Agenda.

For years, I’ve been stating that music awards ceremonies are a celebration of what the Illuminati industry stands for, as their choreographed format offers the industry an opportunity to imprint the collective mind with specific messages and symbolism. After each award season, I notice a growing number of people realizing that something is “off” with the music industry and that it promotes a specific set of values and attitudes. Is the public getting wiser or is it just all becoming too obvious to ignore? Whether the case may be, the show prompted people such as Former University of Alabama quarterback A.J. McCarron to tweet:

Is it just me or are some of the Grammy performances so far seem to be really demonic?? Looks like there is a lot of evil in the world..

Even E! Online tweeted during the show:

Let’s look at the lowlights (a term I coined because that’s pretty much what I do on this site) of the 2014 Grammy Awards. 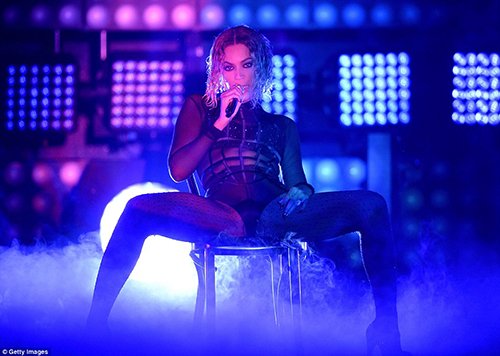 The awards began with Beyoncé singing the words:

From that point, we knew that these awards would probably not be child-friendly. Dressed in a leotard revealing most of her “bootyliciousness”, Beyoncé’s performance was as suggestive as the song’s lyrics. This prompted many parents to complain about why this was televised at 8 pm, while children (many of whom look up to Beyoncé) are still awake. Others noted that if Miley Cyrus gave the same performance, there would probably be a violent revolution right about now.

Beyoncé’s performance was, in fact, an accurate representation of her recently released “visual album”, which contains a bunch of very suggestive videos. After watching that album, I can safely estimate that about 80% of the footage consists of close-ups of Beyoncé touching herself in a sensual matter. In fact, in this album, Beyoncé appears to play the role of a Beta Kitten that is programmed to be “on” all the time (if you don’t know about Beta Programming, read this article). Some videos in Beyoncé’s album contain Monarch programming symbolism. 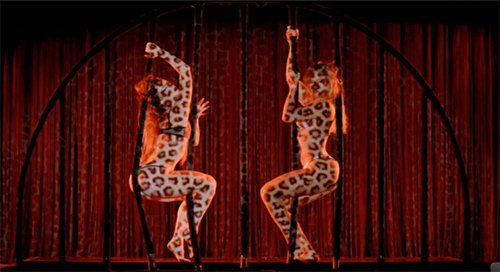 This scene of the video Partition is a true nod to Beta Kitten Programming. There are two Beyoncé’s (representing split of personalities); They are behind bars (representing being an MK slave) and they are covered in animal prints (representing Kitten slaves in Illuminati symbolism).

Beyoncé’s Grammy performance is therefore in line with the main theme of her visual album – Beta Kitten programming. Televised at the very beginning of the awards, her performance is yet another instance an award show exposing millions of young minds to over-sexualization.

The most blatant part of the awards was undoubtedly Katy Perry’s performance, which was so blatant it even caused many “non-aware” viewers to be disturbed by its satanic undertones. The performance began with a sinister voice saying:

“She casts spells from crystal balls. Invoking spirits. She put me in a trance.”

Inside a crystal ball, Perry sings while four horned demon-like figures rise above her.

Some of the sinister figures have Baphomet-like horns.

Katy then gets out of the crystal ball moves around with her backup dancers, remotely controlling them as if they were under her spell.

Seeing the performance, we quickly understand that the song is not about love but about being under occult possession.

The chorus of the song basically reflects what happens to those accepting dark pacts … not unlike most of the successful people in the entertainment industry who were in the audience.

Then Katy apparently summons a dark horse – is it a reference to the dark horse of the Apocalypse? 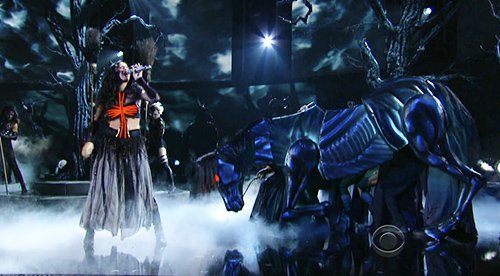 The dark horse’s musculature, bluish color, and glowing red eyes are strikingly similar to another horse seen on this site: The “devil horse” of the Denver International Airport. 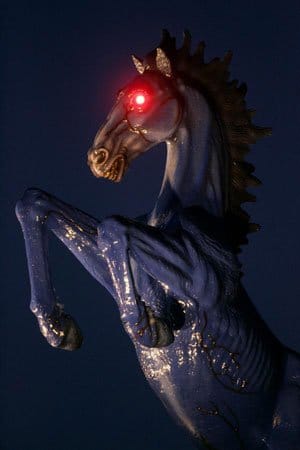 This scary horse stands in front of the Denver International Airport – a place full of NWO symbolism (read the article about it here). Is the horse in Katy’s performance a reference to the “demon horse” (that’s what people in Denver call it) of the DIA?

Katy then dances around a witch’s broom-turned-stripper pole for a while. To complete the ritual, her backup dancers light up a circle of fire around her. 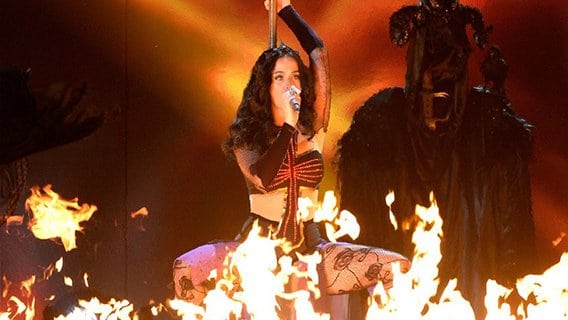 Fire around Katy while the horned figures watch over her. 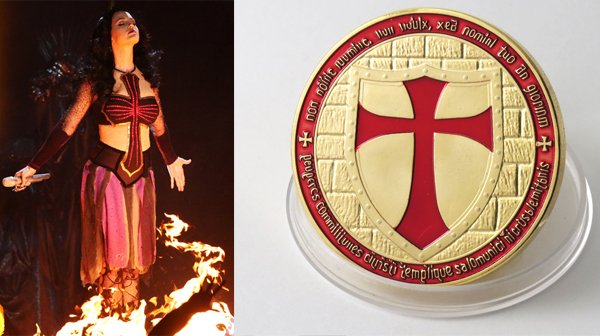 The glowing red cross on Perry’s dress is very similar to the red cross of the Knights Templar.

The Knights Templar were a medieval occult secret society that is considered to be the originator of Freemasonry, the Bavarian Illuminati and the keepers of the secrets of sex-magick as practiced by Crowley’s O.T.O.. The Knights Templar were prosecuted due to their alleged worshiping of Baphomet and for practicing of witchcraft. Perry wearing their cross is therefore very fitting. It also represents the occult elite’s philosophy as a whole. 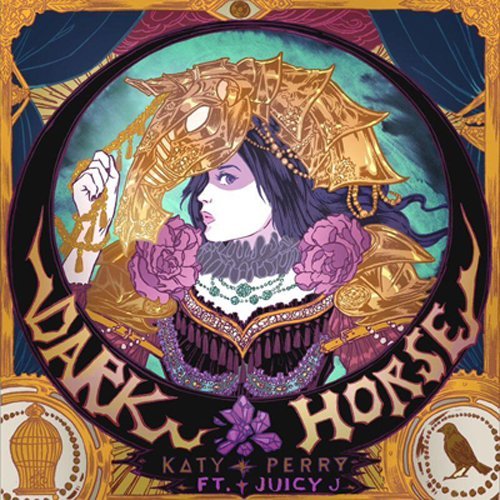 The cover art of Dark Horse features an All-Seeing Eye at the top, signaling that this is sponsored by the occult elite. Also, the bird and the cage hint to the occult mind control elements of the song.

In short, Katy Perry’s performance is the reason why I call most awards ceremonies “mega-rituals”.

Continuing in the exact same vein as Perry’s black magick-themed performance, the Grammy’s were also used to promote the latest Disney movie “Maleficent”. 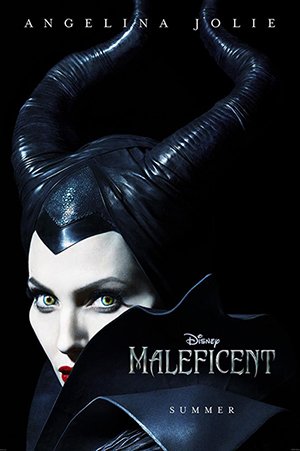 The movie will feature Angelina Jolie as the horned evil witch from Sleeping Beauty.

The trailer shown at the ceremony featured the song “Once Upon a Dream” sung by Lana Del Rey – another figurehead for Beta Kitten Programming (see 98% of her music videos). Not unlike most of the Grammy’s, this Disney movie appears to be aimed at young people, but there not-so-hidden dark undertones to it.

In the trailer, we see Maleficent, dubbed “the Mistress of All Evil”, placing a curse on baby Aurora. This is a good image to represent what mass media does to the youth.

The trailer ends with Maleficent saying:

“There is evil in this world. Hatred. And Revenge … HAHAHAHAHAH!”

Whatever you say, Disney Corporation.

The awards then took an odd turn when Macklemore performed his pro-gay song “Same Love”. The performance featured 33 couples (a symbolic Illuminati number) being wed by Queen Latifah. Right after, Madonna, the Grand Priestess of the music industry herself, came out to sing to her subjects. 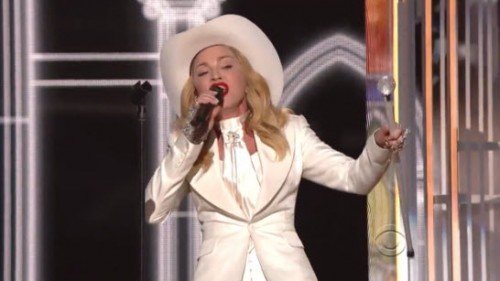 Holding a scepter, symbol of power, Madonna gives her Grand Priestess’ blessings to the mass weddings.

The performance took place in a mock-church, complete with a gospel choir, under which 33 couples were legally married. That is essentially what the Illuminati industry is trying to do: Become the new religion of the masses … complete with televised mega-rituals.

As usual, the 2014 Grammy Awards rewarded the artists the industry wanted to reward and pushed the messages the Illuminati wanted to push. While many performances were simple and sober, those given by the most influential artists today were heavy in messages and imagery. From Beyoncé’s Beta-Kitten performance to Katy Perry’s black magick ritual, we once again saw that important events are almost always used to brainwash the youth and to steer it in a specific direction.

Why is it all about indoctrinating the youth? As Katy Perry’s song says: “Cause once you’re mine … There’s no going back.”