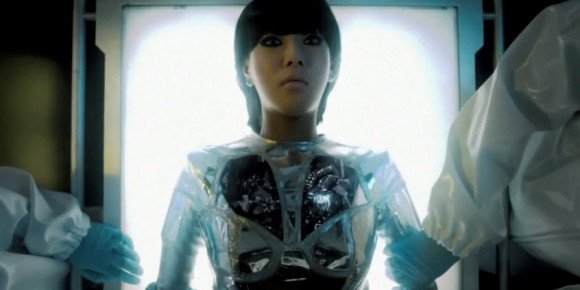 We’ve seen in previous articles that the concept of transhumanism (which can be defined as the merging of humans and robots) is actively being promoted in mass media, whether it be movies, TV shows, music videos or video games (for articles on the subject, type “transhumanism”  in the search bar at the top of the page).

A blatant example of the promotion of transhumanism can be found in the Wonder Girl’s latest video, Like Money. This widely popular K-Pop group is crossing over to America (the song is in English and features Akon) and has been pushing Illuminati symbolism for a while. 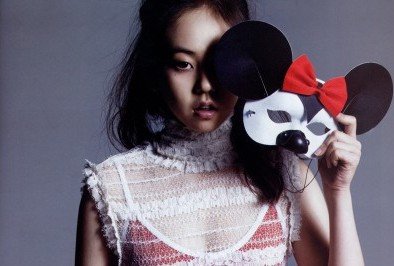 Member of the group Sohee in photoshoot featuring one-eye and Mickey Mouse mask (representing Mind Control). Many other symbolism pics of the group can be found.

In the video, the singers are depicted as robots constructed by faceless scientists and presented as “new and improved” versions of themselves. Yes, apparently losing one’s soul and becoming a remote-controlled robot is now considered an “improvement”. If you  want to watch the video, you can view it here.

The video starts with scrambled video of a single eye, a fun way of letting you know that there’s going to be some Illuminati Agenda going on there.

The intro of the video describes “Project WG and is pretty much an infomercial for transhumanism. Here’s what it says:

“Project WG, deemed a success. Human genetics are combined with robotic enhancements. Yubin, Yenny, Sohee, Lim, Sun: Bionic women given the title of Wonder Girls. They are perfectly designed for complete domination. The future is now.”

These short few phrases contain pretty much all of the characteristics of the transhumanist agenda. By using words such as “enhancements”, “bionic”, “perfectly designed” and “domination”, the concept of transhumanism is sold as something better than regular old human beings. The last phrase “The future is now” is a nice example of predictive programming as it basically tells the viewers that transhumanism will inevitably be part of the future.

The next scenes of the video show members of the group completely blank and lifeless on high-tech operating tables and being put together by faceless scientists. Not only does it make transhumanism look cool, it is a great way of depicting puppets of the music industry. All of internal organs (even the heart) have been removed to be replaced by mechanical parts.

If eyes are windows to the soul, than this electronic eye is a window nothing much.

The rest of the video features amazing lyrics such as “Love me like money, Love me like cars, Love me babe love me babe wherever you are” – proving that brains were probably also removed during “Project WG”.

FacebookTwitterSubscribe
Related Topics:k-poptranshumanismwonder girls
Up Next

Britney Spears Forced to Stay Under Conservatorship Due to “Psychological Issues”