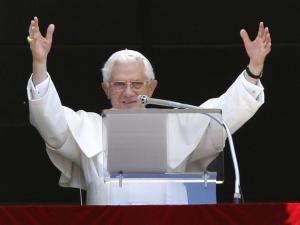 Enough about Jesus. Now listen to my economic policies!

On October 24th, the Pope officially gave his support to Occupy Wall Street and, like Gorbachev, proposed a solution that goes EXACTLY at the opposite of the protester’s demands: an international organization regulating economy. In other words, a Central World Bank. In other other words, a New World Order.

Thank you Vatican for your input. Jesus was indeed a big advocate of international banking. He also preached about a world financial system that would only benefit the elite. Yup, that’s what he did alright (sorry for the extreme sarcasm).

Here’s an article about the Vatican pushing for the same international system as the Rockefellers and others.

Vatican Calls for Oversight of the World’s Finances

The Vatican called on Monday for an overhaul of the world’s financial systems, and again proposed establishment of a supranational authority to oversee the global economy, calling it necessary to bring more democratic and ethical principles to a marketplace run amok.

In a report issued by the Pontifical Council for Justice and Peace, the Vatican argued that “politics — which is responsible for the common good” must be given primacy over the economy and finance, and that existing institutions like the International Monetary Fund had not been responding adequately to global economic problems.

The document grows out of the Roman Catholic Church’s concerns about economic instability and widening inequality of income and wealth around the world, issues that transcend the power of national governments to address on their own.

“The time has come to conceive of institutions with universal competence, now that vital goods shared by the entire human family are at stake, goods which the individual states cannot promote and protect by themselves,” Cardinal Peter Kodwo Appiah Turkson, the president of the pontifical council, said as he presented the report on Monday. “That is what pushed us.”

The language in the document, which the Vatican refers to as a note, is distinctively strong. “We should not be afraid to propose new ideas, even if they might destabilize pre-existing balances of power that prevail over the weakest,” the document states.

The message prompted comparisons with the rallying cries of protest movements that have been challenging the financial world order, like the indignados in Madrid and the Occupy Wall Street protesters in New York City. Still, Vatican officials said the document was not a manifesto for disaffected dissidents.

“The document proposes ideas that seem to be in line with those proposed by the indignados, but really we are in line with the Magisterium of the church,” said Bishop Mario Toso, secretary to the pontifical council, referring to the church’s teaching authority. “It is a coincidence that we share some views. But after all, these are proposals that are based on reasonableness.”

The document is a reminder that the Catholic Church, without getting involved in policymaking, still seeks to shape its principles. “To function correctly the economy needs ethics; and not just of any kind, but one that is people-centered,” the document states, paraphrasing an encyclical that Pope Benedict XVI issued in 2009 calling for greater social responsibility in the economy.

In the United States, the report was embraced by politically liberal Catholics who are concerned about the widening gap between rich and poor. Vincent J. Miller, a professor of Catholic theology and culture at the University of Dayton, wrote, “It’s clear the Vatican stands with the Occupy Wall Street protesters and others struggling to return ethics and good governance to a financial sector grown out of control after 30 years of deregulation.”

John Gehring of Faith in Public Life, a liberal advocacy group in Washington, said, “In the next Republican presidential debate, someone should ask Newt Gingrich and Rick Santorum, both proudly Catholic, whether they support the Vatican’s call for more robust financial reform.”

Politically conservative Catholics, meanwhile, hastened to assure their camp that the document does not carry the full force of church teaching, since it was produced by a Vatican office, not by the pope himself. And some dismissed the report as nothing new, or simply misinformed.

Writing in the National Review, Samuel Gregg of the Acton Institute, which promotes free-market economic policies, said of the document: “It reflects rather conventional contemporary economic thinking. Unfortunately, given the uselessness of much present-day economics, that’s not likely to make it especially helpful.”