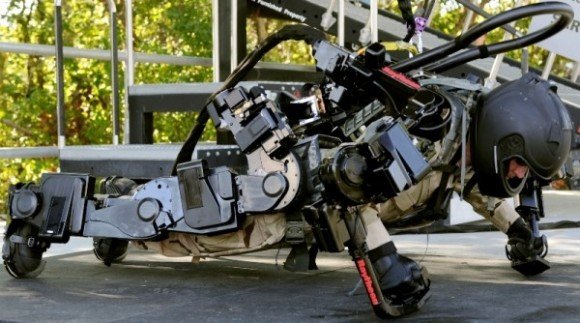 A soldier testing an exoskeleton prototype

The National Intelligence Council is a high-level agency best known for producing National Intelligence Estimates – forecasts predicting future trends and issues of the next fifteen years. These extensive reports are produced every election year and are directly delivered to the  incoming President between Election Day and Inauguration Day. The latest NIC report released on December 2012 is called Global Trends 2030: Alternative Worlds (read it here) and discusses several issues such as the decline of the role of the United States as a global policeman and the rise of non-state actors in world politics. It also mentions another key issue: A fast-paced race towards transhumanism.

“Human Augmentation” is indeed considered a key issue in the next 15 years as new technologies will allow all kinds of modifications “ranging from implants and prosthetics to powered exoskeletons, human augmentation enhancing innate human abilities”. These augmentations would be used on soldiers, workers and anyone that can afford them, giving them “super-human” powers and capabilities, whether it be on a physical or a mental level.

Some might say: “That sounds cool VC, what is wrong with that? Why do you always say that it is wrong”. I personally never described transhumanism as being “right” or “wrong”, I don’t make these kinds of judgement calls. I however do have facts about the issue. First, transhumanism is undeniably being actively pushed by mass media and promoted as something that is necessary and inevitable in the future; Second, it is a logical continuation of the Luciferian philosophy held by the world elite where godhood and immortality is meant to be achieved by humans by their own means. In fact, Max More, a leading transhumanist philosopher considers himself as a “Luciferian”.

“The Devil—Lucifer—is a force for good (where I define ‘good’ simply as that which I value, not wanting to imply any universal validity or necessity to the orientation). ‘Lucifer’ means ‘light-bringer’ and this should begin to clue us in to his symbolic importance. The story is that God threw Lucifer out of Heaven because Lucifer had started to question God and was spreading dissension among the angels. We must remember that this story is told from the point of view of the Godists (if I may coin a term) and not from that of the Luciferians (I will use this term to distinguish us from the official Satanists with whom I have fundamental differences). The truth may just as easily be that Lucifer resigned from heaven.”
– Max More, “In Praise of the Devil”.

Lastly, due to the prohibitive cost of “human augmentation”, transhumanism will only be available to the richest and most powerful people and the world (the world elite) and will created an even wider gap between the “masses” and the “elite”. The National Intelligence Council report states:

“The high cost of human augmentation means that it probably will be available in 15-20 years only to those who are able to pay. Such a situation may lead to a two-tiered society.”

This is why transhumanism is so heavily promoted in mass media. It will only be available to the richest people on Earth, creating a separate, “elite” class of “superhumans” and this concept needs to be accepted by the masses, even if it goes against its best interests. Through predictive programming using movies, TV and video games, the masses are “programmed” in perceiving transhumanism as an inevitability, as something that is bound to happen. That way, when it will actually happen, nobody will be outraged by it, it will be considered as something normal.

Here’s an article on the NIC Report.

The National Intelligence Council has just released its much anticipated forecasting report, a 140-page document that outlines major trends and technological developments we should expect in the next 20 years. Among their many predictions, the NIC foresees the end of U.S. global dominance, the rising power of individuals against states, a growing middle class that will increasingly challenge governments, and ongoing shortages in water, food and energy. But they also envision a future in which humans have been significantly modified by their technologies — what will herald the dawn of the transhuman era.

This work brings to mind the National Science Foundation’s groundbreaking 2003 report, Converging Technologies for Improving Human Performance — a relatively early attempt to understand and predict how advanced biotechnologies would impact on the human experience. The NIC’s new report, Global Trends 2030: Alternative Worlds, follows in the same tradition — namely one that doesn’t ignore the potential for enhancement technologies.

In the new report, the NIC describes how implants, prosthetics, and powered exoskeletons will become regular fixtures of human life — what could result in substantial improvements to innate human capacities. By 2030, the authors predict, prosthetics should reach the point where they’re just as good — or even better — than organic limbs. By this stage, the military will increasingly rely on exoskeletons to help soldiers carry heavy loads. Servicemen will also be adminstered psychostimulants to help them remain active for longer periods.

Many of these same technologies will also be used by the elderly, both as a way to maintain more youthful levels of strength and energy, and as a part of their life extension strategies.

Brain implants will also allow for advanced neural interface devices — what will bridge the gap between minds and machines. These technologies will allow for brain-controlled prosthetics, some of which may be able to provide “superhuman” abilities like enhanced strength, speed — and completely new functionality altogether.

Other mods will include retinal eye implants to enable night vision and other previously inaccessible light spectrums. Advanced neuropharmaceuticals will allow for vastly improved working memory, attention, and speed of thought.

“Augmented reality systems can provide enhanced experiences of real-world situations,” the report notes, “Combined with advances in robotics, avatars could provide feedback in the form of sensors providing touch and smell as well as aural and visual information to the operator.”

But as the report notes, many of these technologies will only be available to those who are able to afford them. The authors warn that it could result in a two-tiered society comprising enhanced and nonenhanced persons, a dynamic that would likely require government oversight and regulation.

Smartly, the report also cautions that these technologies will need to be secure. Developers will be increasingly challenged to prevent hackers from interfering with these devices.

Lastly, other technologies and scientific disciplines will have to keep pace to make much of this work. For example, longer-lasting batteries will improve the practicality of exoskeletons. Progress in the neurosciences will be critical for the development of future brain-machine interfaces. And advances in flexible biocompatible electronics will enable improved integration with cybernetic implants.