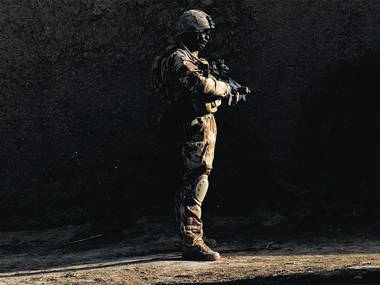 We’ve seen in previous articles that the concept of transhumanism and “enhanced human” is being actively promoted in movies, music videos and video games. Here an article from the Independent describing the “enhancements” that are being planned to be given to soldiers to make them better at killing people including exoskeleton, memory erasing drugs and exposing the brain to magnetic fields. What’s even more upsetting is that the author of the article sounds actually quite excited about these “improvements” that deshumanize humans into unthinking, highly altered killing machines.

The ancient Spartans believed that battlefield training began at birth. Those who failed the first round of selection, which took place at the ripe old age of 48 hours, were left at the foot of a mountain to die. The survivors would, in years to come, often wonder if these rejects were the lucky ones. Because to harden them up, putative Spartan warriors were subjected to a vigorous regime involving unending physical violence, severe cold, a lack of sleep and constant sexual abuse.

As with the English public schools, which used similar tactics to produce the warriors who carved out the British Empire, the Spartan regime worked; the alumni were the most feared soldiers in the eastern Mediterranean. And ever since then, military chiefs have wondered whether it may be possible to short-cut the long and demanding Spartan regime to produce a soldier who kills without care or remorse, shows no fear, can fight battle after battle without fatigue and generally behave more like a machine than a man.

In the post-war era, the future of fighting was thought to be about tanks and missiles, large impersonal machines that would fight huge battles over the open terrain of Northern Europe. The soldiers would be pressing buttons in a command centre. But despite the advent of drone aircraft, much of 21st-century warfare is turning out to be a drawn-out, messy business, fought on a human scale in the mud and dust of Afghanistan. And fought against a mercurial army of irregulars who melt away into the fields and farms once the skirmish is over. Modern soldiers are not the cannon fodder of before. Highly trained and super fit, each one represents a huge investment by the nation that sends them into battle. A soldier who is too tired to fight effectively, who has gone mad or who is suffering from severe stress is like a broken-down tank, no use to anybody. What if soldiers could be made that did not break down?

The era of The Terminator, the perfect robotic killing machine, is decades away; to date, all efforts to create a humanoid robot that can climb the stairs, let alone fight the Taliban, have been risible. But scientists are reporting breakthroughs with the next-best thing – the creation of human terminators, who feel less pain, less terror and less fatigue than “non-enhanced” soldiers and whose very bodies may be augmented by powerful machines.

Efforts to understand the brain of the soldier and put this knowledge to good use have been going on for some time. Professor Jonathan Moreno, a bioethicist at Pennsylvania State University, studies the way neuroscience is being co-opted by the military. “Right now, this is the fastest-growing area of science,” he says.

The Pentagon is currently spending $400m a year researching ways to “enhance” the human fighter. The defence giant Lockheed recently unveiled its “Hulc” (Human Universal Load Carrier), a science fiction-like, battery-powered exoskeleton that allows a human to lift 100kg weights and carry them at a fast run of 16kph (10mph). The videos of the Hulc in action are truly impressive. Superman strength is one thing, but soldiers still need to sleep. In Afghanistan the average soldier in combat gets only four hours’ rest a day and sleep deprivation is the single biggest factor in reducing fighting performance. Not only are tired soldiers less physically able to fight and run, they make more mistakes with the complex weapons systems at their disposal – mistakes that can prove deadly to themselves and their comrades.

Using chemistry to attack fatigue is, of course, nothing new. Two centuries ago, Prussian soldiers used cocaine to remain alert and Inca warriors used coca leaves to stay alert long before that. Since then, nicotine, amphetamines, caffeine and a new class of stimulants including the drug Modafinil have all been used successfully, to the extent that American soldiers can now operate normally even after 48 hours without sleep. Now the chemists are trying to tweak the molecular structure of this drug so that it will switch off the desire for sleep for even longer.

Tiredness is not the only psychological problem faced by soldiers. Combat is immensely stressful and although proper training means that men and women can remain focused while in mortal danger, it is afterwards that problems begin. During the Vietnam War, one in three soldiers was treated for post-traumatic stress disorder (PTSD) and in the Second World War a significant proportion of Allied conscripts never fired a shot in anger because of stress and fear before the battle had even begun. Up to now, PTSD has been treated by a mix of psychotherapy and antidepressants – effective techniques but expensive and time-consuming. But as with fatigue there may be a chemical shortcut for PTSD.

The trick is to erase unwanted memories, or at least take away their sting. Professor Roger Pitman, a psychiatrist at Harvard Medical School in the US, has been experimenting with a drug called propranolol, a “beta blocker” normally used to treat high blood pressure, which he believes can erase the effects of terrifying memories.

Professor Pitman has given the drug to young volunteers who have suffered extreme trauma in, for example, road accidents. Those given placebos suffered nightmares, and remained fearful of the road. When exposed to recordings describing their accidents they suffered typical stress responses – sweating, beating heart, dilated pupils. But those who had been on a course of propranolol showed no response at all. It was as though the trauma had not happened. For a soldier, memory-altering drugs such as this could mean violent combat becoming no more troubling, retrospectively, than a visit to the gym. “The problem is,” Professor Moreno says, “what else are they blocking when they do this? Do we want a generation of veterans who return without guilt?” You may not even need drugs to short-out the unwanted side effects of battle. Dr Albert “Skip” Rizzo, a psychologist from the University of Southern California, has created a “virtual Iraq” video game, in which veterans have been able to re-enact their experiences to release pent-up stress.

Generals not only want stronger, more alert and less stressed soldiers; they want smarter ones, too. One of the most bizarre neuroscience findings in recent years is that by immersing the human brain in a powerful magnetic field, its powers of reasoning and learning are almost magically enhanced.

No one knows exactly how “transcranial magnetic stimulation” (TMS) works, but the Australian neuroscientist Professor Allan Snyder believes that magnetic fields in some way “switch off” the higher levels of mental processing that normally cloud our thoughts, allowing a “pure” form of reasoning to take over.

“Each of us could draw like a professional, do lightning-fast arithmetic,” he says. In fact, some subjects in TMS experiments have acquired (temporarily) similar abilities to the rare “autistic savants”, people who are able to perform astounding arithmetical feats and memorise whole telephone directories (an autistic savant was played by Dustin Hoffman in the film Rain Man).

In 2009, a US Academy of Sciences report concluded that within 20 years we could be using TMS to enhance soldiers’ fighting capabilities. As Professor Moreno says, “there is talk of TMS machines being used on the battlefields within 10 years in vehicles and in 10 years more in helmets.” Why? Being a soldier demands a high level of technical expertise. It is no longer just a case of pointing a gun and shooting. Even combat rifles are now “systems” and mastering battlefield electronics requires a lot of training.

It may seem clear that if you could create a man with no scruples, who feels little pain and no fear, you would have an excellent fighting machine, but this may be a case of be careful what you wish for. We get scared for a reason – to avoid danger to ourselves and others. Fatigue may force us to rest before sustaining damaging injury. Even post-traumatic stress disorder may have a beneficial role. Moral scruples help soldiers to act as an effective team – in battle, troops will always say they are fighting for their mates before Queen and country.

Take away the humanity of the soldiers and there is a danger that the battles and wars we fight will become inhuman as well. Most of all there is, surely, a danger that these techniques, far from producing better soldiers, will actually produce a squad of zoned-out zombies, who will be no match for the determined, driven and highly motivated zealots of the Taliban.

Lady Gaga: Another Pop Artist With a Strange Relationship With her Parents