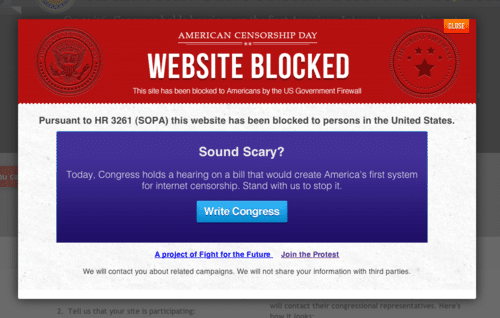 A screenshot from tumblr protesting against SOPA

SOPA (Stop Online Piracy Act) is a proposed bill that has the potential of ending freedom of speech on the internet. While it appears to be about piracy and “protecting copyrights”, the bill gives the power to corporations to complain to law enforcement to have websites shut down. To many, this is a step too and goes way beyond fighting illegal downloads. Here’s an article from CNN Money about internet companies (many of which have close ties to the government) opposing this bill.

A proposed new bill intended to combat online piracy has sparked a giant backlash from big tech companies, including Google and Facebook, who say the proposals are far too strict and rife with unintended consequences.

The Stop Online Piracy Act (SOPA), which was introduced in the House of Representatives in late October, aims to crack down on copyright and trademark issues. Its targets include “rogue” foreign sites like torrent hub The Pirate Bay.

Protecting content is a worthy goal, but here’s the flip side: Opponents say SOPA — and a similar bill called the Protect IP Act that is making its way through the Senate — effectively promotes censorship.

If SOPA passes, copyright holders would be able to complain to law enforcement officials and get websites shut down. The law would also force intermediaries like search engines and payment processors to withhold their services from targeted websites.

That would be quite a change from the 1998 Digital Millennium Copyright Act, which mandates that companies “act in good faith” to remove content that infringes on copyrights and other intellectual property laws.

Google executive chairman Eric Schmidt called the bill “draconian” during a speech in Boston on Tuesday.

Google and other tech behemoths — AOL, eBay, Facebook, LinkedIn, Mozilla, Twitter, Yahoo and Zynga — also lodged a formal complaint on Tuesday in the form of a letter sent to key Senate and House lawmakers.

“We support the bills’ stated goals,” the letter reads. “Unfortunately, the bills as drafted would expose law-abiding U.S. Internet and technology companies to new uncertain liabilities [and] mandates that would require monitoring of web sites.”

SOPA’s critics — some of the Internet’s most heavily trafficked sites — launched an awareness campaign on Wednesday. Hundreds of sites adopted black “STOP CENSORSHIP” logos, including BoingBoing, Reddit and the Electronic Frontier Foundation.

One site tried to annoy consumers into action. Blogging site Tumblr blacked out words in its content feeds, and a message at the top of users’ dashboards read: “Stop The Law That Will Censor The Internet!”

“Congress is holding hearings today and will soon pass a bill empowering corporations to censor the Internet unless you tell them no,” Tumblr wrote in a post Wednesday, calling the bills “well-intentioned but deeply flawed.”

Proponents of the bill dismiss accusations of censorship.

The legislation would “[prevent] those who engage in criminal behavior from reaching directly into the U.S. market,” Judiciary Committee Chairman Lamar Smith, who introduced the bill, said in a statement Wednesday. “We cannot continue a system that allows criminals to disregard our laws.”