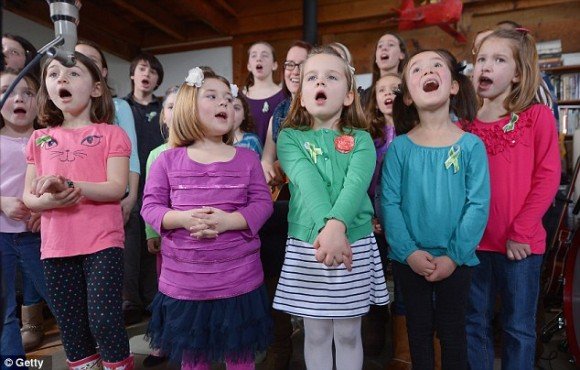 Some of the children who survived the Sandy Hook school shooting recorded a version of Judy Garland’s song Over the Rainbow, one month after the massacre. In one big media event, these young children were brought to a recording studio and made to record the song, all under the never-ceasing clicks and flashes of cameras. They then went on to perform the song on Good Morning America. The song is now on sale iTunes and Amazon.

While news sources describe this event as a “emotional healing process”, there are quite a few strange facts about this “event”. The most obvious one is: Why are these children being exposed to the public in such a way? Why are they pushed in mass media spotlight? Why are they in a recording studio with music industry people looking for publicity and made to sing a song that almost “embraces” what happened? Why isn’t this “healing process” happening in private, with friends and family? Why are iTunes and Amazon involved (yes, the song will be sold on these services for “charity” – the new word to justify exploitation)?

This is however not the most troubling part of this story. Considering the context surrounding the massacre and the possibility that the perpetrator was under mind control (as I described in Thought of the Month (01/13): Mass Shootings and Mass Media), the song choice Over the Rainbow is quite telling and, sadly, quite appropriate. As I stated in several other articles, the movie The Wizard of Oz and the song Over the Rainbow are major tools used by Mind Control handlers to program their slaves (if you have no idea what I’m talking about , please read the article entitled Origins and Techniques of Monarch Mind Control). Through violence and trauma, slaves are encouraged to dissociate from reality and are told to go “Over the Rainbow”.

Over the rainbow in Oz is for the Monarch slave to be in a trance, and into a certain area of the programming. To be fluctuating at both ends as an observer and not a participant or to go to the other extreme and become a participant. The theme song of the movie goes, “Somewhere over the Rainbow…there’s a land where the dreams that you dare to dream really come true.” These lyrics are a method to hypnotically confuse the brain to perceive that the “over the Rainbow experience” (which is usually horrible abuse) is a “dream”. The dissociative mind is only too happy to call the trauma a dream, which is lived as a reality for a moment, but is nevertheless recorded by the mind as a fantasy. The term for this is cryptoamnesia, which means the process where the proper functioning of memory is hypnotically messed up. The slave’s internal world becomes “reality” and the external real world becomes the Land of Oz which is perceived as make-believe.”
– Fritz Springmeier, The Illuminati Formula to Create a Mind Controlled Slave

So, in short, to “commemorate” a shooting that was carried out by a MK patsy, survivors of the shooting are made to sing (because this wasn’t of their own initiative neither was it their song choice) a song that is used to program MK slaves. All of this in one big staged media event, where the children are asked to smile and pose for the cameras. How about not exploiting these kids for BS charity and not making them further part of this horrifying ritual that was the Sandy Hook shooting?

Here’s an article about the event.

A song for Sandy Hook: Watch the children who survived school massacre’s heart-breaking recording of Over The Rainbow in memory of their lost friends and teachers

This is the heartbreaking video of the survivors of the Sandy Hook shooting as they sing Over The Rainbow in memory of the friends and teachers they lost.

The 21 elementary school children, aged between six and nine, gathered together to sing the Judy Garland classic for charity and mark the one-month anniversary on Monday.

Some of the children had been inside the school in Newtown, Connecticut when a gunman opened fire, killing 20 children and six teaching staff on December 14.
The students appeared with singer-songwriter Ingrid Michaelson on Good Morning America today. They recorded the song at the home of two former band members of Talking Heads. The track went on sale today on Amazon and iTunes, with proceeds benefiting a local United Way and the Newtown Youth Academy. Kayla Verga, ten, says she sang for her friend, Jessica Rekos, who was killed at Sandy Hook. She says it feels like Jessica is beside her, singing along with her.

The song was recorded at the home of musicians Tina Weymouth and Chris Frantz, who performed with bands Talking Heads and Tom Tom Club. The Song for Sandy Hook was recorded at the couple’s home studio in Fairfield, Connecticut while parents looked on. The little girls wore green ribbons in their hair and pinned to their sweaters to remember their friends and teachers.

Mr Frantz told the Daily News: ‘It was emotional, absolutely. But the kids were resilient. They loved to sing and they were good at it.’ The National Intelligence Council Predicts a Very Transhuman Future by 2030