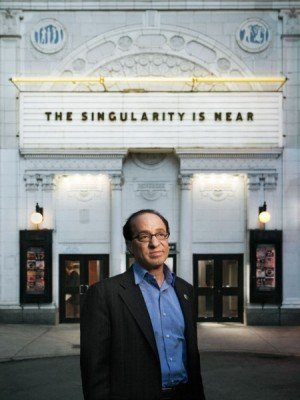 We’ve seen in previous articles (notably in The Transhumanist and Police State Agenda in Pop Music) that the concept of transhumanism, which can be defined as the merging of humans and robots, is being abundantly promoted in music videos, movies and video games. On top of this “indirect” kind of promotion, transhumanism is being sold through more direct channels such as documentaries, television features and news reports. The main face of the movement is the American inventor Ray Kurzweil who has recently been on a massive PR campaign to promote what he calls “Singularity” (a term that is probably less threatening than “transhumanism”).

Kurzweil is however not a lone nut with a crazy futuristic dream. He works in collaboration with the world’s most powerful people in business and politics. For example, in February 2009, Kurzweil collaborated with Google and the NASA Ames Research Center, to create the Singularity University training center for corporate executives and government officials. The University’s self-described mission is to “assemble, educate and inspire a cadre of leaders who strive to understand and facilitate the development of exponentially advancing technologies and apply, focus and guide these tools to address humanity’s grand challenges”. It is safe to say that transhumanism is not only the goal of one man but of the entire global elite. For this reason, the merging of humans and robots is not only promoted as something “cool” and positive in mass media, it is announced, despite its potential pitfalls, as an inevitability.

Here’s an article from the Daily Mail about Singularity. It bares the typical “overwhelmingly-positive-but-with-a-hint-of-obligatory-criticism-to-appear-objective” tone most mainstream news sources use when covering the issue.

Hitler would have loved The Singularity: Mind-blowing benefits of merging human brains and computers

Of all the tall tales in the science-fiction TV series Star Trek, what impressed me most when I was a  little boy was the Vulcan mind meld.

Laying his hands on the head of a human (or, in one of the films, a humpback whale), Mr Spock could, for a moment, dissolve the distance between two living things.

Each experienced everything the other felt, thought, knew and saw.

Now it seems scientists are about to make the Vulcan mind meld a reality – and go far beyond it.

Ten years ago, the US National Science Foundation predicted ‘network-enhanced telepathy’ – sending thoughts over the internet – would be practical by the 2020s. 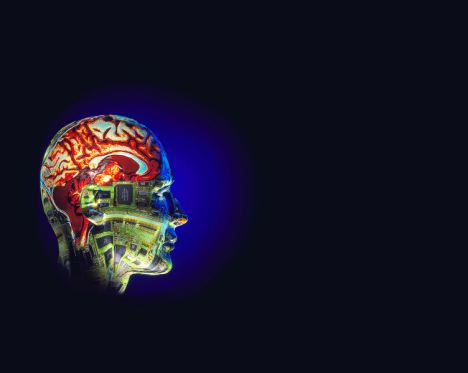 Man and machine: Computers could soon be hardwired into the human brain and unlock amazing powers

And thanks to neuroscientists at the University of California, we seem to be on schedule.

Last September, they asked volunteers to watch Hollywood film trailers and then reconstructed the clips by scanning their subjects’ brain activity.

‘We’re opening a window into the movies in our minds,’ Professor Jack Gallant announced.

Last week, the scientists boldly went further still. They charted the electrical activity in the brains of volunteers who were listening to human speech and then they fed the results into computers which translated the signals back into language.

The technique remains crude, and has so far made out only five distinct words, but humanity has crossed a threshold. 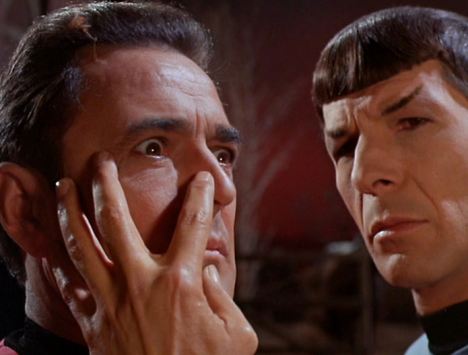 Science fact?: Harnessing the power of the mind was a favourite of science fiction, including Star Trek's Vulcan mind meld

But the new breakthroughs promise to deliver much greater – and real – benefits.

No longer need strokes and neurodegenerative diseases rob people of speech because we can turn their brainwaves directly into words.

But this is only the beginning. Neuroscientists are going to make the mind meld look like child’s play. Mankind is merging with its machines.

The process began centuries ago with simple devices such as eyeglasses and ear trumpets that could dramatically improve human lives.

Then came better machines, such as hearing aids; and then machines that could save lives, including pacemakers and dialysis machines.

By the second decade of the 21st Century, we have become used to organs grown in laboratories, genetic surgery and designer babies.

In 2002, medical researchers used enzymes and DNA to build the first molecular computers, and in 2004 improved versions were being injected into people’s veins to fight cancer.

By 2020 we may be able to put even cleverer nanocomputers into our brains to speed up  synaptic links, give ourselves perfect memory and perhaps cure dementia.

Since the Sixties, computer chips have been doubling their speed and halving their cost every 18 months or so.

If the trend continues, the inventor and predictor Ray Kurzweil has pointed out that by 2029 we will have computers powerful enough to run programs  reproducing the 10,000 trillion electrical signals that flash around your skull every second.

They will also have enough memory to store the ten trillion recollections that make you  who you are. 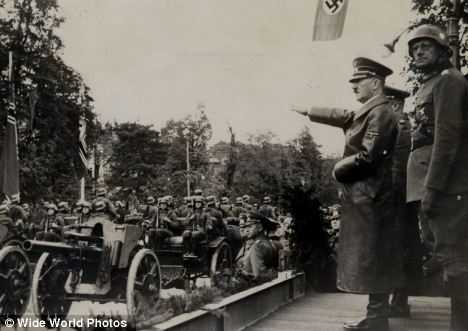 Dangerous technology: The huge potential unlocked by the technology raises frightening prospects if it were to be used by evil dictators like Adolf Hitler

And they will also be powerful enough to scan, neuron by neuron, every contour and wrinkle of your brain.

What this means is that if the trends of the past 50 years continue, in 17 years’ time we will be able to upload an electronic replica of your mind on to a machine.

There will be two  of you – one a flesh-and-blood animal, the other inside a computer’s circuits.

And if the trends hold fast beyond that, Kurzweil adds, by 2045 we will have a computer that is powerful enough to host every one of the eight billion minds on Earth.

Carbon and  silicon-based intelligence will merge to form a single global consciousness.

Kurzweil calls this ‘The Singularity’, a moment when ‘the pace of technological change will be so rapid, its impact so deep . . . that technology appears to be expanding at infinite speed’.

At that point, we will have  left the Vulcan mind meld far behind. But even this may not be the end of the story.

Much of the research behind last week’s breakthrough in brain science was funded not by universities but by DARPA, the US Defence Advanced Research Projects Agency.

It was DARPA that brought us the internet (then called the Arpanet) in the Seventies, and DARPA’s Brain Interface Project was a pioneer in molecular computing.

More recently, DARPA’s Silent Talk programme has been exploring mind-reading technology with devices that can pick up the electrical signals inside soldiers’ brains and send them over the internet.

With these implants, entire armies will be able to talk without radios. Orders will leap instantly into soldiers’ heads and commanders’ wishes will become the wishes of their men. Hitler would have loved it. 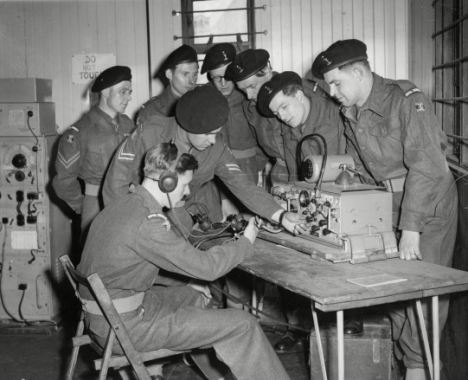 Thing of the past: Advances in technology could revolutionise the way armies communicate 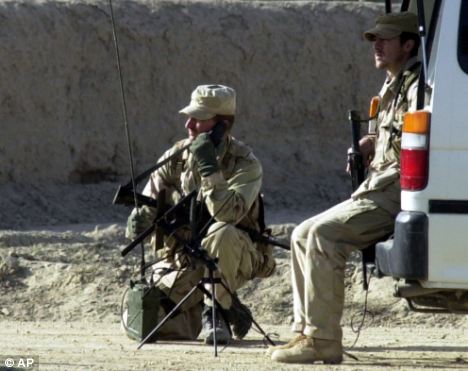 Cyborg-soldier: The defence industry could soon try implanting computer technology into the brain of soldiers

Some of the clearest thinking about the new technologies has been done in the world’s departments of defence, and the conclusions the soldiers draw are alarming.

For example, US Army Colonel Thomas Adams thinks that military technology is already moving beyond what he calls ‘human space’, as robotic weapons become ‘too fast, too small, too numerous, and . . . create an environment too complex for humans to direct’.

Technology, Col Adams suspects, is ‘rapidly taking us to a place where we may not want to go, but probably are unable to avoid’.

As goes war, so,  perhaps, goes everything else. The merging of mankind and its machines that Kurzweil predicts for the mid-21st Century may, in fact, turn out just to be a lay-by on the way to a very different destination.

Later in the century, what we condescendingly call ‘artificial’ intelligence might replace us humans just as thoroughly as we humans once replaced all our evolutionary ancestors.

All this will come to pass . . .  unless, of course, it doesn’t. Maybe the trends Kurzweil and Col Adams identify will slow down, or even stall altogether.

And maybe the critics who mockingly call the Singularity ‘the Rapture for Nerds’ will be proved right.

But on the other hand, maybe the Nobel Prize-winning chemist Richard Smalley is closer to the truth when he points out: ‘When a scientist says something is possible, they’re probably underestimating how long it will take.

But if they say it’s impossible, they’re probably wrong.’

The University of California’s neuroscientists have taken us one more step towards a final frontier far beyond anything dreamed of in Star Trek.

What Happened to Whitney Houston?