When it was announced that Jay-Z’s new album would be released in partnership with Samsung, some fans grumbled about him “selling out”. Well, things are a lot worse than just him “selling out to the corporate world”. The app that was created to enable Samsung users to listen to Jay-Z’s album a few days in advance is a true data-mining operation that collects an insane amount of data from its users. Here’s a screenshot of the permissions needed taken posted by rapper Killer Mike on Twitter. 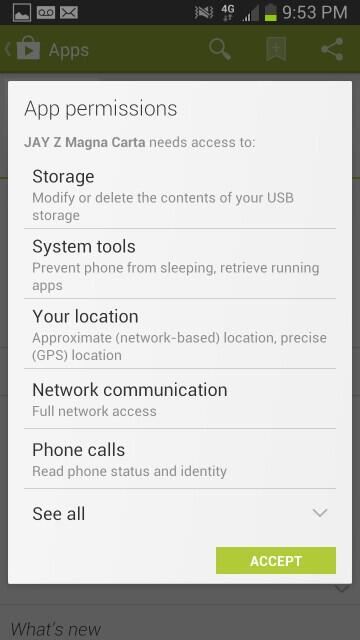 The app needs to be able to modify or delete the contents of your USB storage, it can identify all of the running apps on your phone and it needs to know your *precise* GPS location. It also gathers “accounts ” the e-mail addresses and social-media user names connected to the phone. While these permissions are often requested by social media apps and so forth, this is an ALBUM LISTENING APP. Why does it need all of this information.

But things get worse. Here’s a review from the NY Times.

In the days before the album’s release through Samsung, the app promised to display lyrics — with a catch. “Unlocking” the lyrics required a post on Facebook or Twitter. I used Twitter, where hitting the “Tweet” button brought up a canned message: “I just unlocked a new lyric ‘Crown’ in the JAY Z Magna Carta app. See them first. http://smsng.us/MCHG2 #MagnaCarta.” The message could be altered, but something had to be sent. No post, no lyrics — for every song. Users were forced to post again and again. And frankly, a lyric that is going to show up almost immediately on the Internet isn’t much of a bribe for spamming your friends.”

– Jon Pareles, Jay-Z Is Watching, and He Knows Your Friends

While some see Jay-Z as a savvy and powerful business man, he is once again being used by the elite to push its agenda further. Whether it be pushing their occult symbolism or their Big-Brother Agenda, Jay-Z is apparently down with it.

Rap used to be about exposing oppression and staying true to yourself and your community. However, like many other “movements”, rap is being co-opted by the elite to further the very things the movement used to denounce. Fortunately, there are still rappers who have a powerful message to communicate. For example here’s Killer Mike’s (mentioned above) video “Reagan”.

Related Topics:jay-zprivacy violations
Up Next