If regular people knew what the occult elite did behind closed doors, they would be horrified, terrified and completely baffled by the fact that they hold most of the world’s wealth and power. While there is a massive concerted effort to keep these truths out of the public space, sometimes some of that disgusting, stinking truth leaks out in unexpected places.

In a TMZ segment from 2012 with the former bassist of the rock band Scorpions, Ralph Riekermann admits he attended snuff parties, where guest paid over $100K to watch a live murder. And, judging by his facial expression, he was not joking.

At the end of the video, Riekermann says he attended another party that was so revolting that it made him want to throw up. What was he referring to? I am not sure, but I have the feeling it involved children…

One thing is for sure, these “snuff parties” attended by celebrities are simply a symptom of the deeper mind state of the occult elite which revels in the ritualistic abuse, suffering, and murder of innocent people. Why? Because a) they are literally evil and multi-generational Satanists b) they perceive the non-elite as a sub-human species that can be exploited at will and c) they believe that the ritual sacrifice of people (the younger the better) releases occult power that is highly potent.

This mind state is behind strange initiation ceremonies members of the occult elite must go through such as David Cameron placing his genitals in the mouth of a dead pig after joining Oxford University dining society. Speaking of which, it is a rather strange coincidence that a “piggy” bank is seen jumping out of Cameron on the Economist 2015 cover I analyzed in this article. 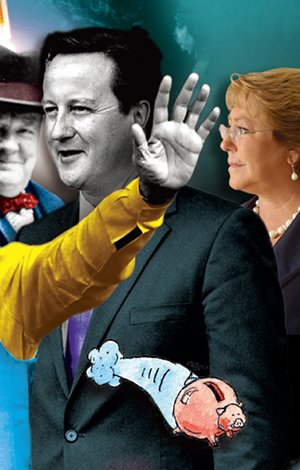 Cameron on the cover of the 2015 Economist cover with an enigmatic piggy.

When one understands what happens behind closed doors, one also understands that something is terribly wrong in the higher echelons of society.

In June 2015, three years after the segment aired on TV, Riekermann took to YouTube and released an official statement where he dissociates himself from these parties.

Whether or not Riekermann was actively involved in all of this is however irrelevant and does not change the fact that these “parties” actually exist. He did not deny that he saw some truly disgusting things going on there – and that’s what the world needs to know.

I've said it before and I'll say it again: you have to be on drugs to enjoy living on this planet…

They are demon. They see people as food. This is all true. I have had first hand experience with them. They need to do this to stay alive. They are disgusting and vile
They do everything the opposite of the bible because they know it's real and god is real. They rebel against him and want to beat him. When Jesus Christ of Nazareth comes back they will be done. They know this but won't admit it.

In the mean time to help pray against them in the power of the holy spirit. Put the blood of Jesus against them. Rebuke bind and cast them down to the pit of hell. Send back to them what they have done. They are terrified of that because it works. We don't war after the flesh but after powers principalities and rulers of darkness.
Bind them in Jesus.

100% correct. His Hebrew name given by Gabri’al is Yahushua. There is SO much power in the Name. Thank you for posting the Truth. Stay blessed and Awake.

This world is sick.

Things done in the dark will be brought to light for day for ALL to see! May Jesus help us all. God Bless

I don't want to see this snuff stuff, when it comes to light.

Did he/she/it die? It's been a while since there was something worth reading here (and this is one of the few sites I check everyday in anticipation of something great). This is a really old story, and the "update" on the article from the bassist was posted long before this was even written here. The comedian story is also really old. Used to be you came here to see stuff first. Was it bought by Disney?

Vote Up0Vote Down  Reply
On the ball

There are evil people who walk amoungst us in everyday life. One must always be on guard. ALWAYS !!!!…

Vote Up9Vote Down  Reply
They Live

One word: Hostel. Those series of movies tell it all.

Yeeaah man! That's exactly what I was going to say and guess what the name of the group is in the film?…….."Elite Hunting" Club – Can ya believe it….

Here's an old article about Skull and Bones, the secret society at Yale. http://www.sott.net/article/302426-Skull-and-Bone…

The psychos are running the asylum, the spooks control the media, the money-grubbers own us all.

It's time to get angry, time to get loud — time to let your voice loose to say that you will no longer be part of this.
We can make this a better world. We can, not them.
Each of you is important, each of you is special. Each of you now has the opportunity to show us all what you can do with your specialness,.
It's time to make a difference, my friends.

what do you propose we do? any suggestions?

Whatever happened with those prostitutes whose bodies were found on the beaches in The Hamptons? Or that body of a woman found on the estate of The Queen? There really wasn't any obvious follow-up in the news. I was pretty shocked by both. When that happens, I assume it has something to do with elite partying gone wrong or spoiled brats who have even their most horrible deeds conveniently covered up.

Beyond Virgin Killer, here are a few of the Scorpion's other album names:

And, of course, all of the covers feature occult symbolism.

I just read a couple month's ago the book Satan's Underground by Lauren Stratford and she goes into extreme details about her experience since childhood being in snuff films and sold into a satanic handler's care… I won't give all the details but these parties exist and happen very frequently.

Prayer is powerful to end them and set the captives free.

He paid a hundred thousand dollars for the first party he went to.
Then he paid another $100K for the second party?

If you guys can still remember the movies Hostel and Hostel II, then those movies' are pretty related and obviously similar to the snuff parties Ralph Rickermann has attended to. Who happened to be the participants (I mean, butchers) of the said movies? It is no other than BUSINESSMEN.

Sick! it justs fits together when we see some ''artits'' or ''celebrities'' out of nowhere being friends. They all know each other- and each others secrets. these new young girls making pop music and hanging with mature A-list actors, it just makes me sick. Imagine how they all met……..

He didn’t say where or what year. Haven’t many people been to parties where they see disgusting things…The mainstream does exaggerate and takes things out of context to promote agendas and issues. The goonish looking people on TMZ are the blood drinkers.

I just saw the update on the VC site with the video i had posted previously in my comment.
It is so important to understand the lying tactics that the media uses to bring their own shaded and misguided “version” of an event.
In this case, to make the whole thing into a joke (a perverse and repulsive joke)….meant to undermine the credibility of the story, while making a mockery of the person and their affiliations according to the prejudices of TMZ itself.

VC, I wonder if you have ever listened to Abel Danger? The thing with Cameron and the pig is what really got me wondering b/c AD has put together some very interesting clues regarding the Pickton pig farm and how the elite would go there and watch prostitutes be fed into wood chippers or be eaten alive by pigs. They call them pig-_uckers or pf-ers. This farm was located in Canada and it also involved many Native women. If you have not heard of this, I think that you would be very interested.

Vote Up0Vote Down  Reply
A. -Whiteguy

Good thing Germans are white, so TMZ can make fun of their culture!!

This changes everything though, because far from being a forthcoming witness of snuff parties, Ralph merely knows what the wors snuff means, like all of us.

He does not look German though. And he lives in LA. Of course he'd participate in such parties. The place to be.

It doesn't matter if he participates or not. His life, his business.

Bryce Taylor spoke in her book of being filmed for snuff films at night in a bowling alley on Ventura Blvd in Woodland hills Calif. I grew up in the San Fernando Valley and remember this bowling alley! After the disgusting kill, she was told to smile. (see book, "Thanks for the Memories") She can tell you that these films really exist, and disgusting rich people buy the films. I pray for her and others who were abused by these perverts. God help them.

Wait, so she did the killing in the snuff film?

Comment on the Rock in Rio in 2015, which looks more like satanic ritual. (My family is watching right now on the Internet at the time I posted this comment)