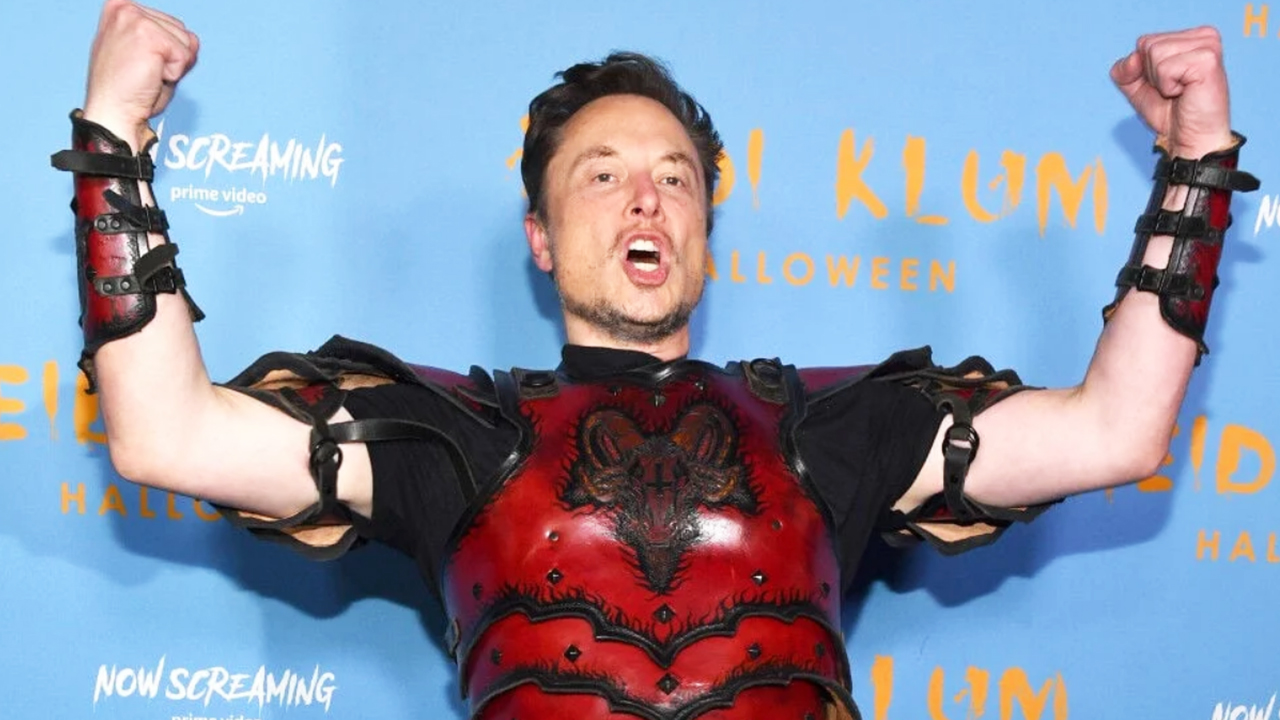 Heidi Klum’s annual Halloween party gathered, as usual, major celebrities who paraded around in extravagant costumes. While this event always contains its fair share of weird and creepy costumes, guests this year apparently used the party to just come out about their satanic tendencies. 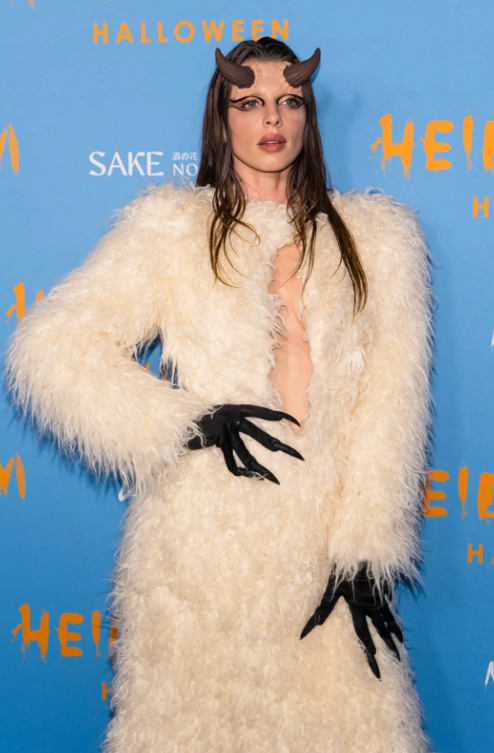 Julia Fox came dressed as, like, the devil or something. The fact that she used to go out with Kanye West (who is supposedly very Christian) is telling. 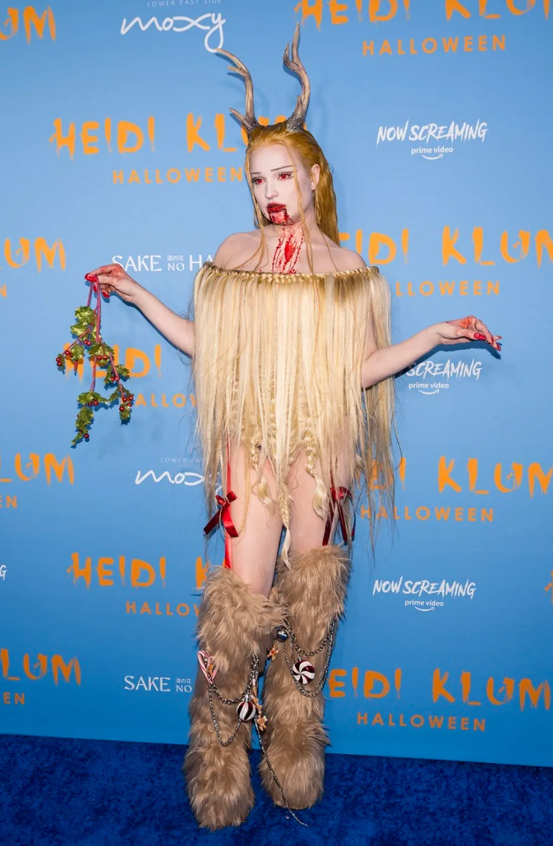 Transgender singer Kim Petras was dressed as something resembling Pan – the horned-headed and goat-footed diety. But also with blood around the mouth because they also like to celebrate cannibalism. 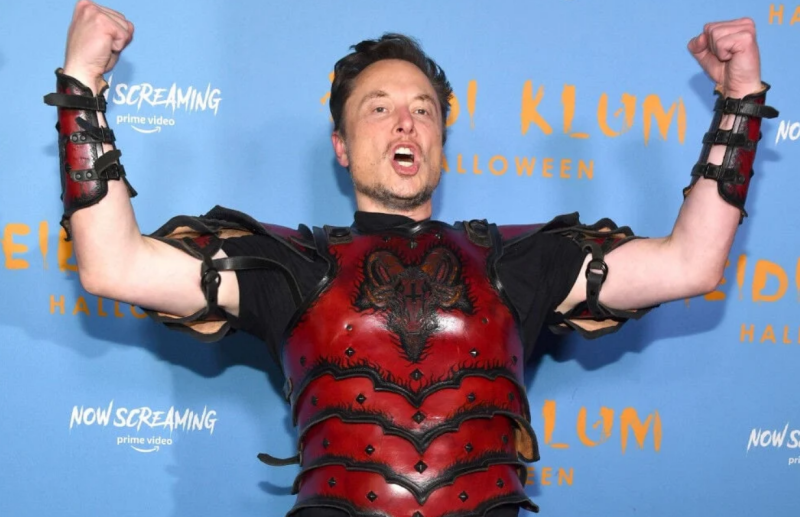 Elon Musk arrived triumphantly at the party wearing a costume worth $7,500. Its name: “Devil’s Champion”. 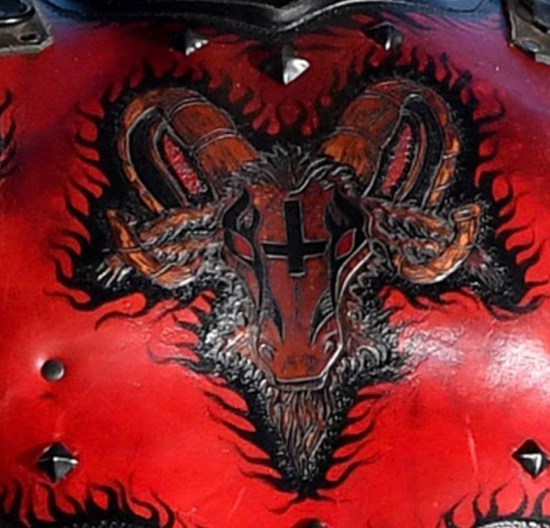 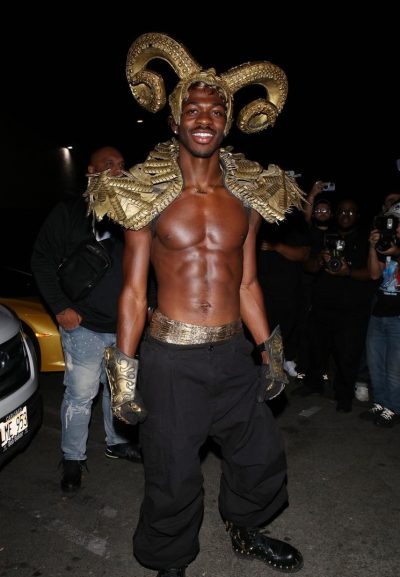 Speaking of witch (not a typo), Machine Gun Kelly and Megan Fox were at it again. After announcing to the world that they literally drink blood in rituals, they annoyed the entire world with their satanic costumes. 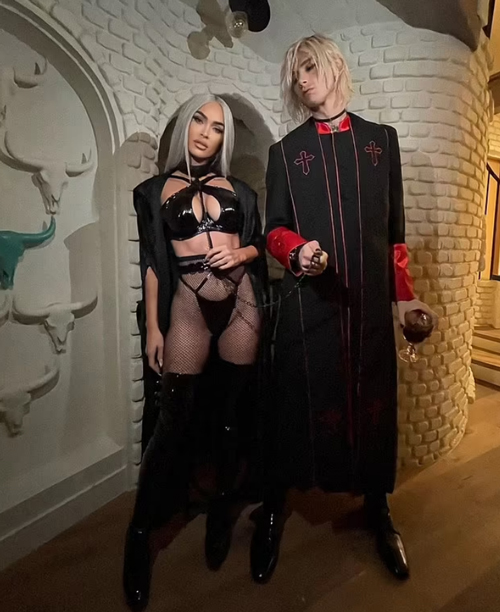 MGK is dressed as a priest while Fox plays the role of his submissive sex slave. 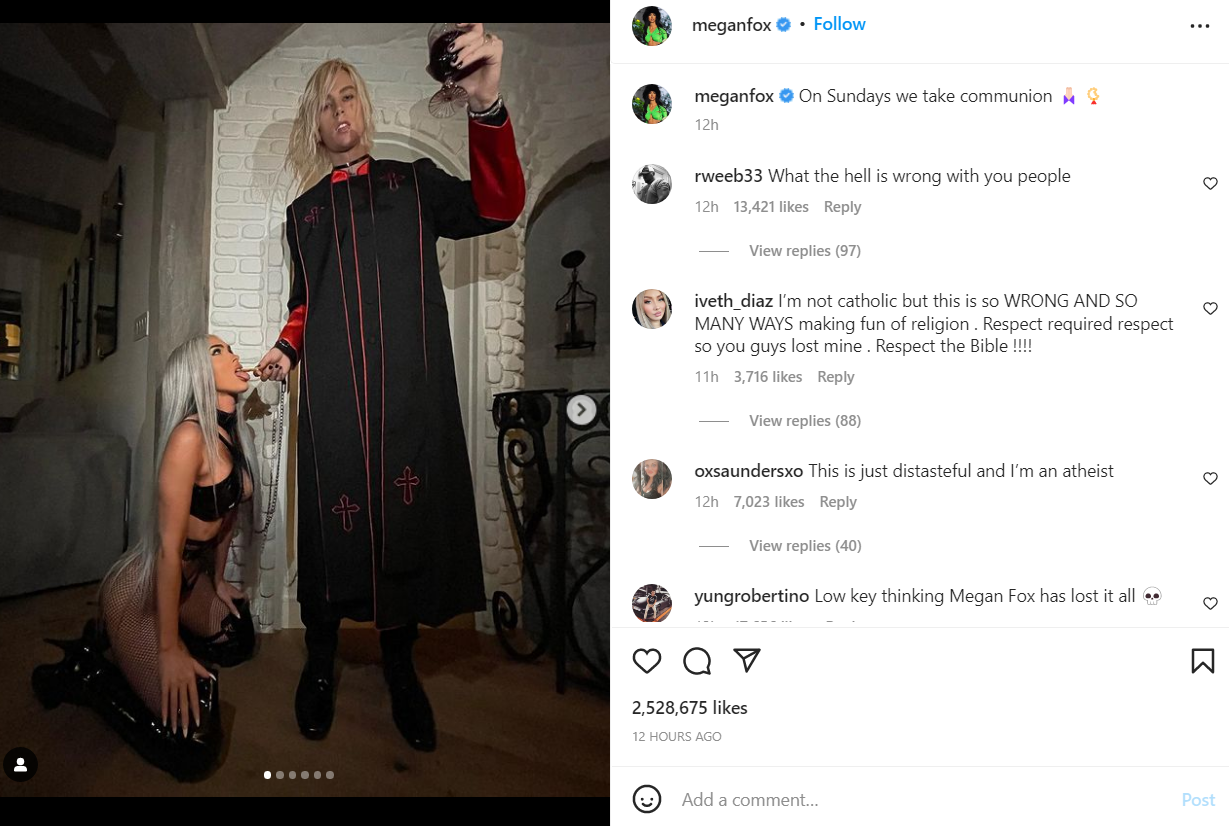 Fox’s Instagram post says “On Sundays, we take communion” next to a pic that sexualizes the Christian rite. This is all a mockery of Christianity which happens to be the core theme of Satanic black masses. 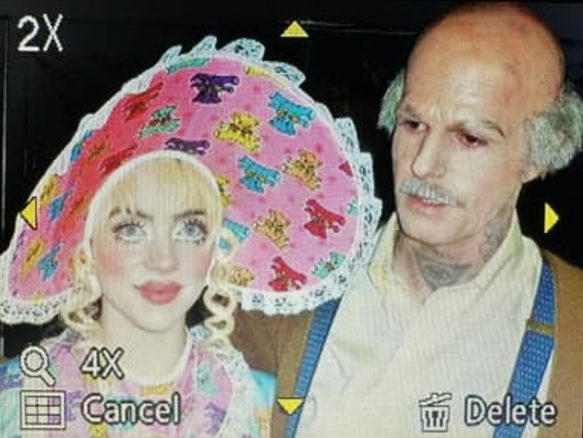 Billie was dressed as a baby and her boyfriend was an old pedophile. What is wrong with these people?

The next picture is not a Halloween costume. But it’s pretty close. 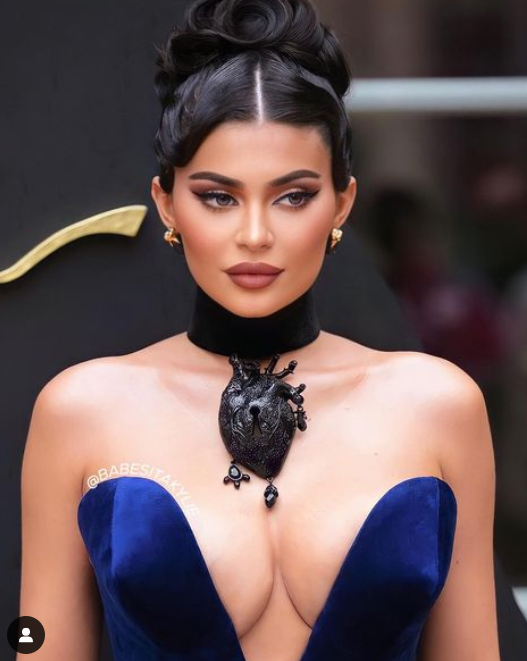 At Paris Fashion Week, Kylie Jenner wore a choker on which hung a realistic black heart. In symbolism, a black heart is usually associated with death, evil, and the lack of soul. Furthermore, there’s a keyhole inside the heart, implying that someone can access it – like a mind control handler, perhaps. 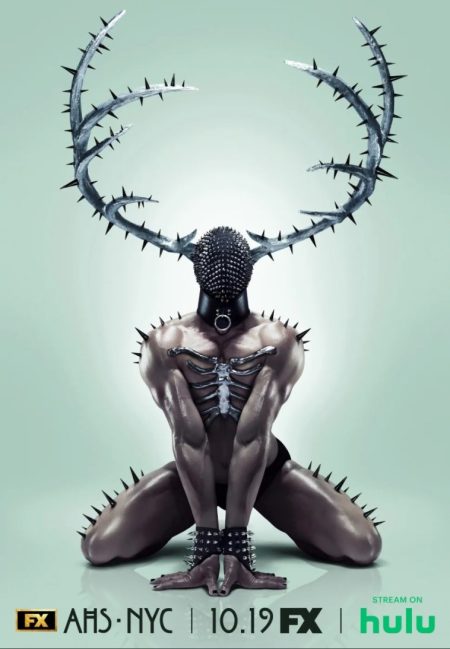 As seen in previous articles, American Horror Story is basically a playground for the occult elite’s sick tendencies. The poster promoting the series’ latest season reflects this fact perfectly: A satanic, submissive, sex slave dude that’s restrained and constantly in pain. They want all men to be that guy.

As usual, the one-eye sign was all over the place last month. Here are just a couple of examples. 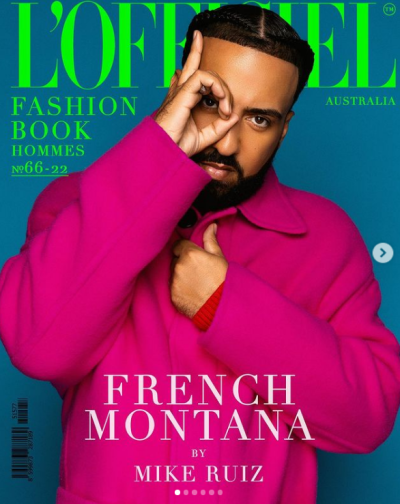 French Montana does a blatant one-eye sign on the cover of L’Officiel Australia.

Some might say: “Bro, you don’t get it. This is not Illuminati, this is a gangster sign. You just don’t get it, bro!”  Alright, bro, let’s look at another picture. 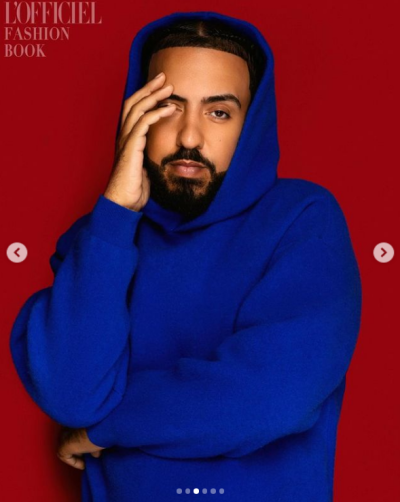 Is this still gangster, bro? Does gently tickling your eye with your pinky finger a gangster sign as well? Because this looks like the least gangster pose in world history. Here’s what actually happened: Montana was told to do this. If he doesn’t do this, he doesn’t get media promotion.

Anna Sorokin is a Russian-born German con artist and fraudster who posed as a wealthy heiress to access the upper echelons of the New York social and art scenes from 2013 to 2017. Despite going to jail for grand larceny and other crimes, mass media loves her. In fact, she’s got all kinds of lucrative projects in the works. The one-eye sign on this puff piece by The New York Times is all the proof you need.

This picture of Harry Hamelin posing with his DAUGHTER raised some eyebrows. 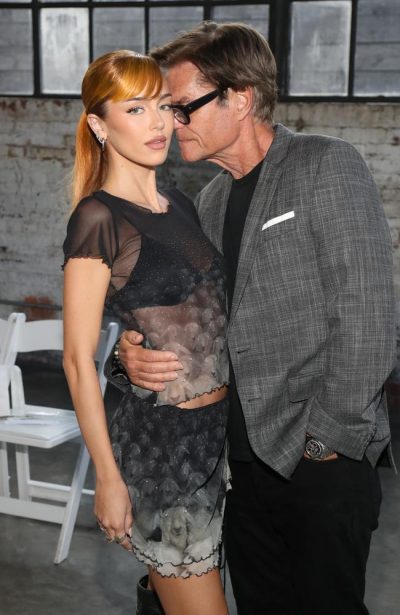 This weird picture of Hamelin smelling his daughter’s face (or something) while holding her tight is weird. Why do Hollywood weirdos keep taking these kinds of pics? (see the article There’s Something Terribly Wrong Happening With the Sons of Celebrities).

On October 20th Microsoft did it. In an attempt to pathetically cater to the LGBT3Q+%#()#*& agenda, it managed to turn it into a parody of itself. 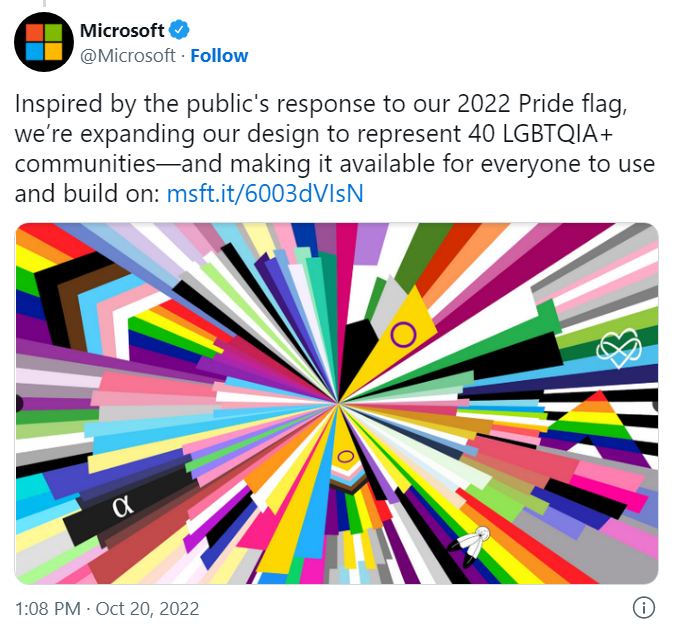 Microsoft unleashed on the world this new pride flag. No, it is not a parody. This jumbled mess perfectly represents the “alphabet” agenda: A volatile “movement” with no core values that constantly morphs according to the interests of the global elite.

Remember that old man in Squid Game? He’s 78 years old. He still has to pay the price of fame 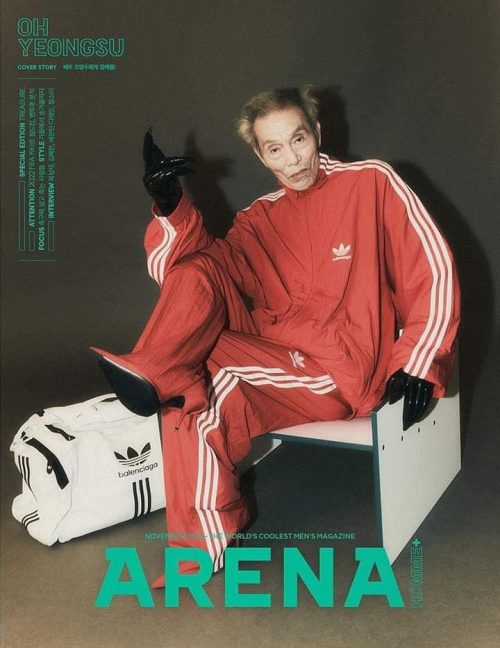 Even Oh Yeongsu has to submit to the gender-blurring agenda by posing in women’s heels and gloves. Since my article about Squid Game, nearly every single actor in this series appeared in SPOTM for one reason or another.

In case you needed more proof that the gender-blurring agenda is pathetic and desperate, here’s what happened during a “family-friendly” show broadcast in the UK at 9 PM. 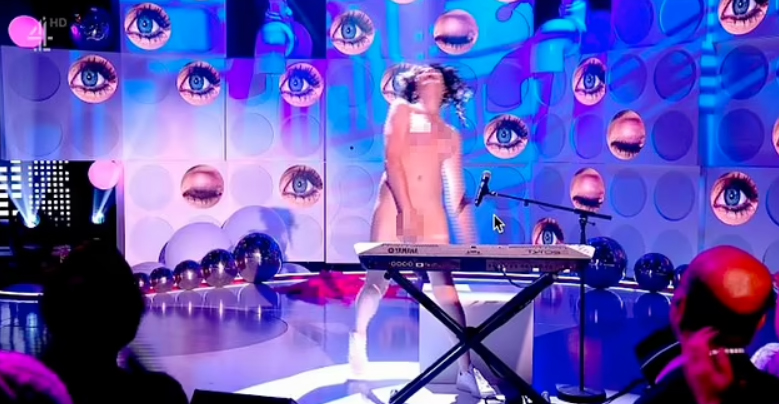 A transgender performer stripped naked and played the keyboard with his penis. On live TV. Children were watching. The eyes surrounding the performer hint to the fact that the occult elite sponsored this civilization-destroying madness.

The following mural was unveiled at a high school in Michigan. Parents immediately complained and claimed that it contained “anti-Christian and pro-LGBT” propaganda. They’re right. 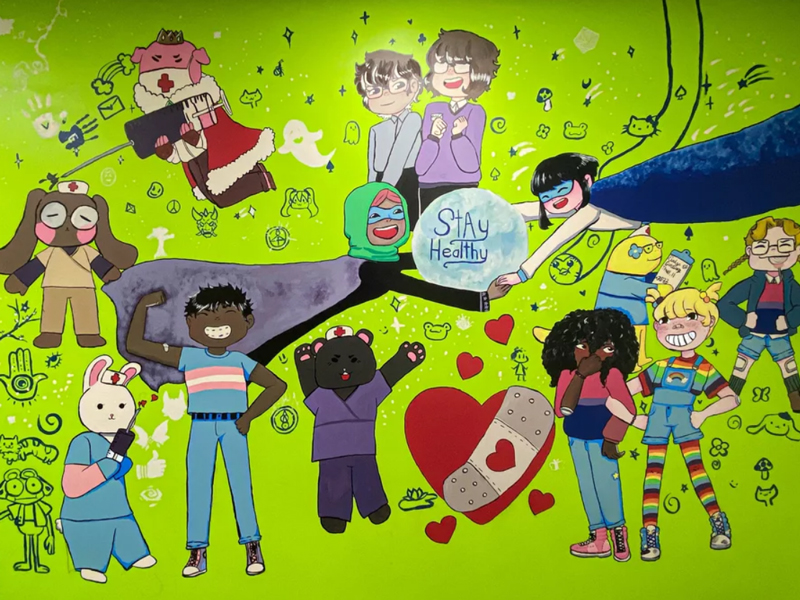 Other than the characters carrying huge needles (vaccine propaganda), the mural contains a rainbow flag, a transgender flag, and the bisexual flag (LBTQ propaganda). Why are we obsessing over the sexuality of these minors? Furthermore, there’s also the face of the devil. In short, this is the equivalent of school murals celebrating the communist regime in the USSR. It’s just pure propaganda. How about we keep all of that garbage outside of schools?

As seen in previous articles, The Economist (which is owned by the elite) loves to make dire predictions about humanity using symbolism. And it is often correct. 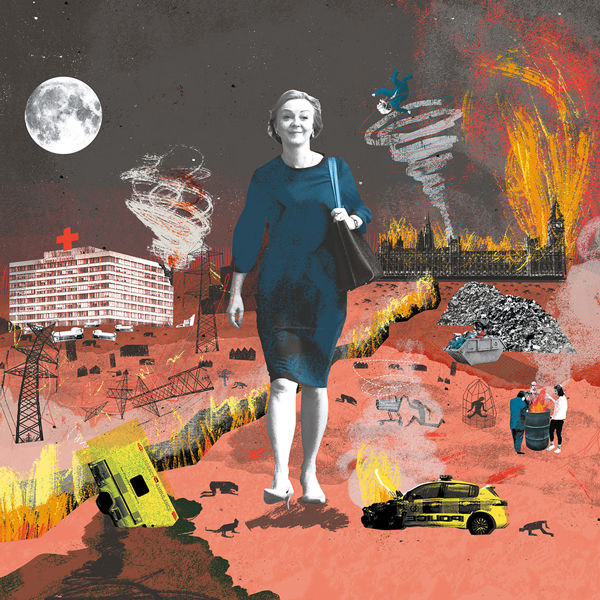 In this bizarre image featured in The Economist, we see a smirking Liz Truss walking away (with a smirk on her face) as the parliament burns, a hospital gets destroyed and the power grid crumbles. Also, there’s a mangled body inside a cage. They love to depict the masses suffering. Also, there’s a full moon which is prime time for occult rituals.

Since the publication of this image, Struss bizarrely quit as Prime Minister of England and was replaced by another unelected guy: A billionaire named Rishi Sunak. 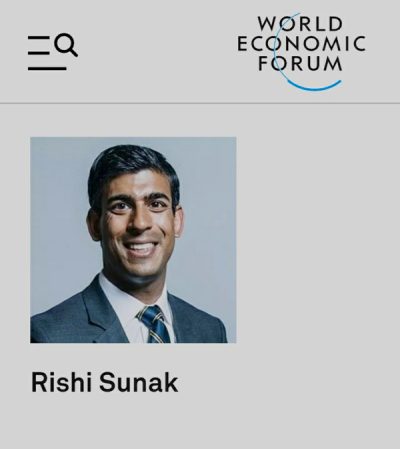 Like his predecessor, Sunak is part of the World Economic Forum. He’s even featured on their website. That’s all you need to know about him.