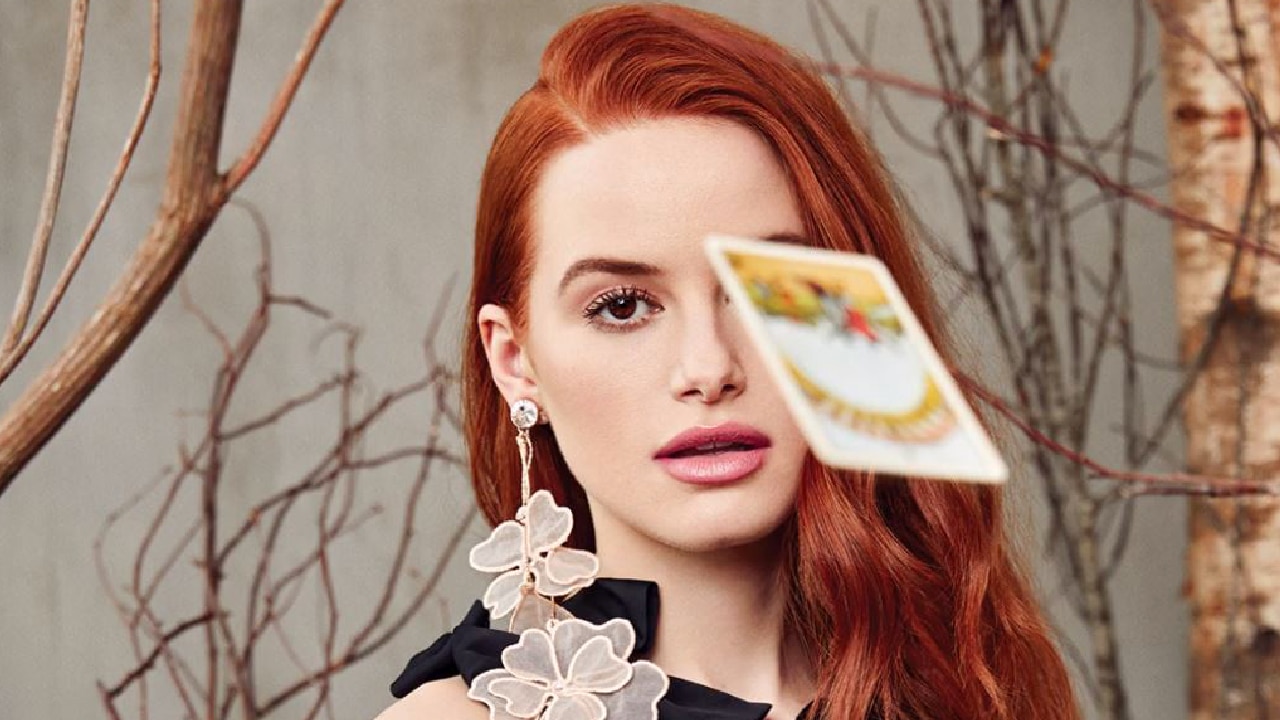 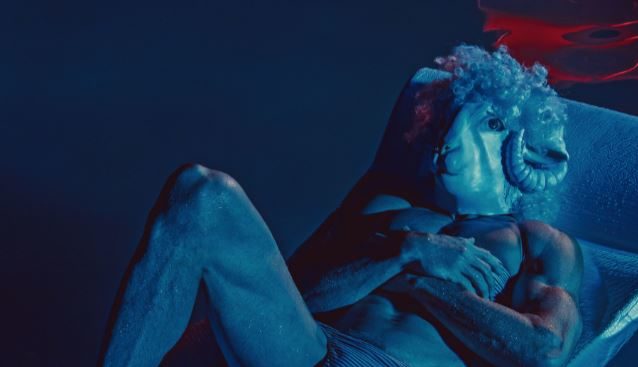 A photoshoot in S magazine was all about the occult elite’s favorite activities: Wearing animal masks, desecrating Christianity and pushing pseudo-satanism in mass media.

Here, a appears to be about to rape someone in the woods while wearing a pig mask (I had to crop out the exposed genitals). Do you know else really like animal masks?

This is the picture that welcomes visitors to the official website of the Church of Satan. 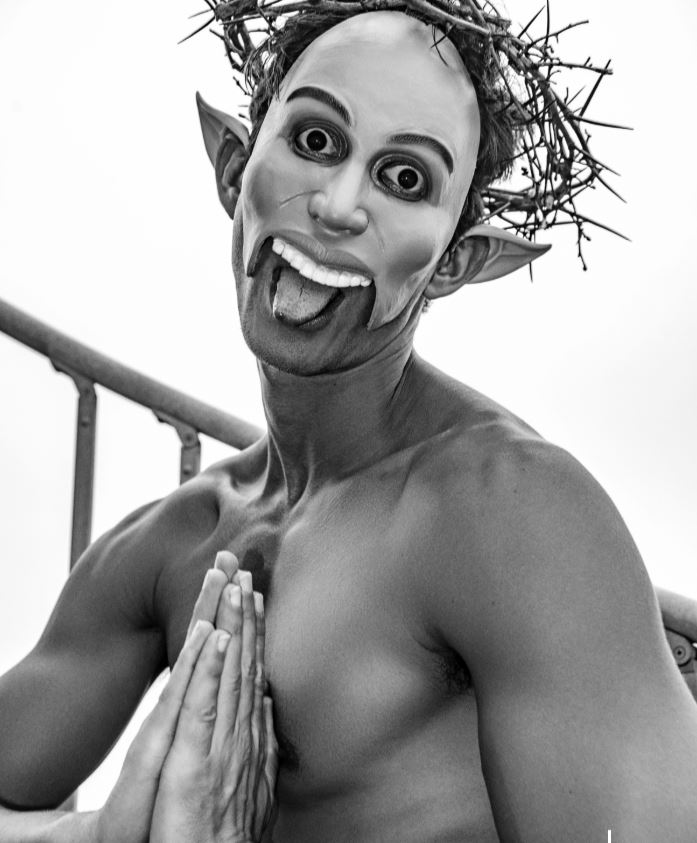 This picture perfectly captures the spirit of the photoshoot: A dude with a mask looking like a demon while wearing a crown of thorns (which was worn by Jesus before his crucifixion). To push the satanic inversion further, the model does “praying hands”. 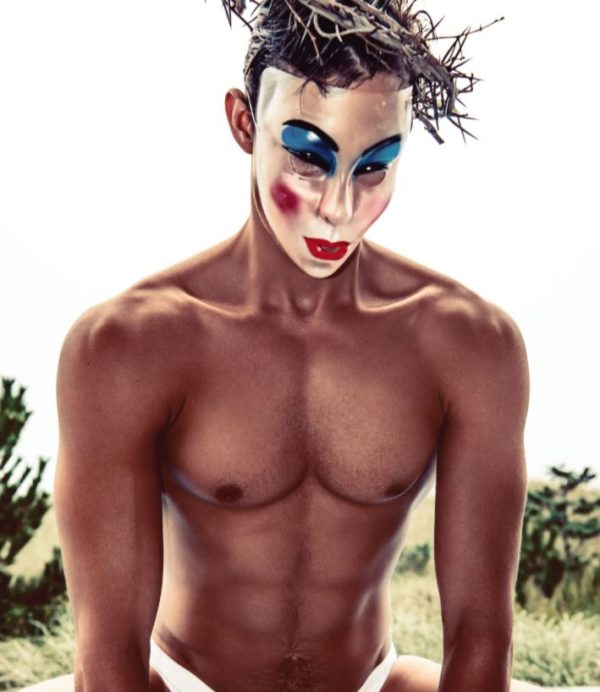 Here, the crown of thorns is combined with a Geisha mask – a Japanese tradition of women who “entertain men”. In short, it is all about desecration.

Witchcraft as a tool for “female empowerment” is a theme that keeps reappearing in mass media. The feminist organization Women’s March posted this image on November 5th that says “Casting spells Casting Votes”. What does “casting spells” have to do with politics? Nothing. But it is part of the “culture” they are trying to create. Here’s another image by the same artist.

A witch reads an occult book with the Eye of Horus on its cover. She leans on books with the titles “Spells to Topple the Patriarchy” and “Hexes for Equality of the Sexes”. The promotion of witchcraft as a potent tool to help feminism is being heavily promoted in mass media (see my article on the Netflix series Chilling Adventures of Sabrina). 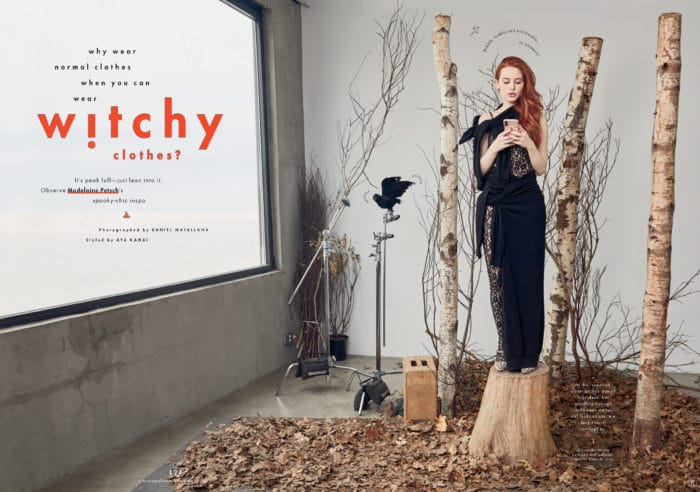 Cosmopolitan magazine is also doing its part in promoting witchcraft by making it cool and fashionable. This is Riverdale actress Madeleine Petsch in a photoshoot entitled “Why wear normal clothes when you can wear w!tchy clothes”. 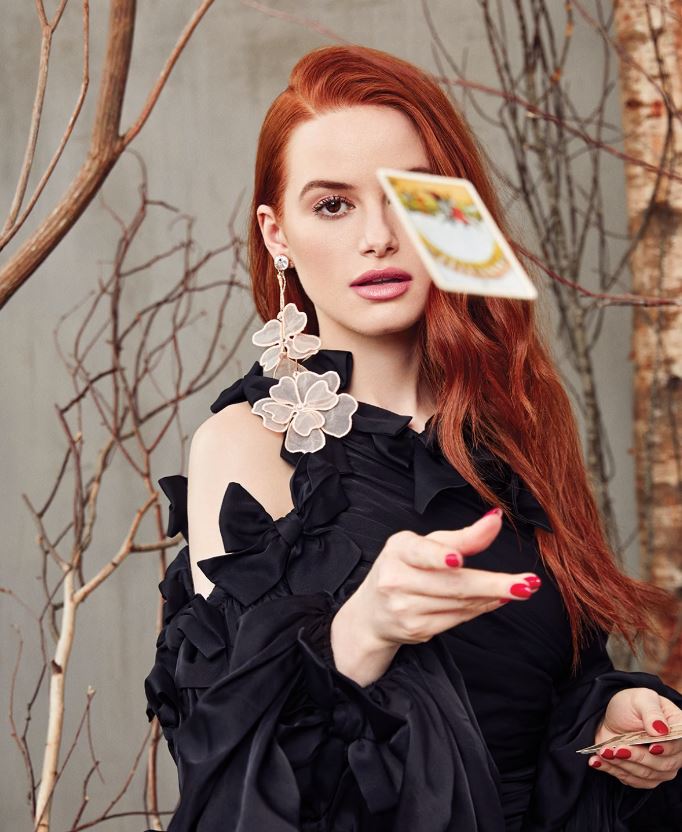 To confirm that this is all part of the occult elite’s agenda of normalizing its beliefs and practices, Petsch throws a tarot card at you and creates a clever one-eye sign by doing so.

Speaking of it, the one-eye sign was, as usual, plastered all over mass media this month. This is actress Lucy Boynton hiding one eye on the cover of Bazaar Mexico. She uses a flower to do it, which is very clever. 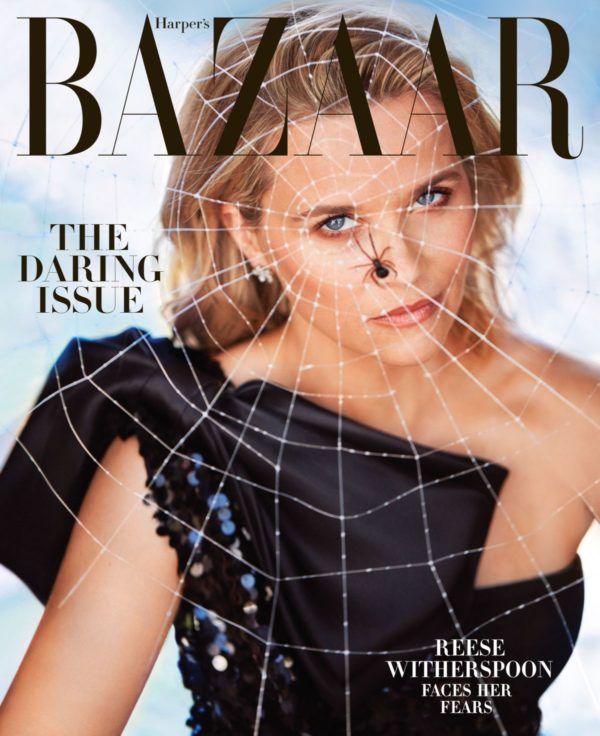 Reese Witherspoon on the cover of Harpers Bazaar. The spider web ends up focusing on one eye. Pure cleverness. 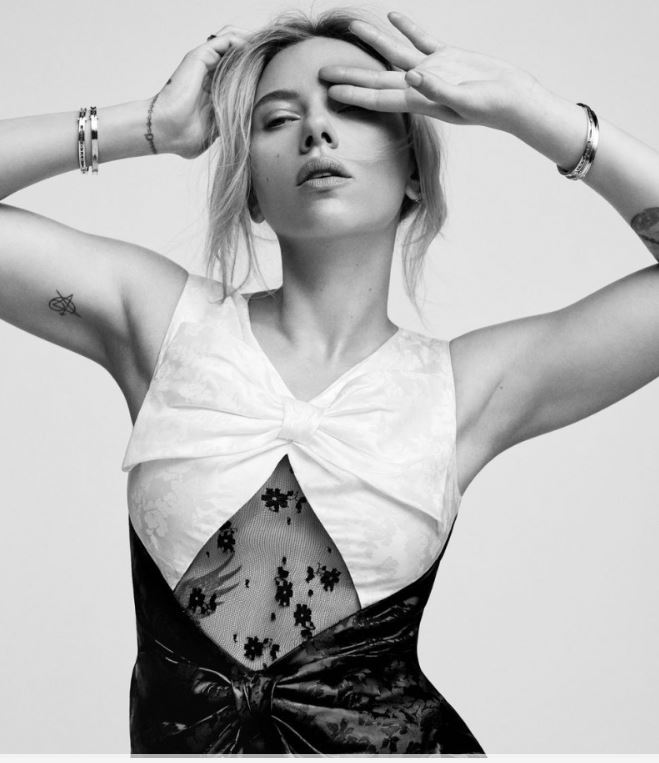 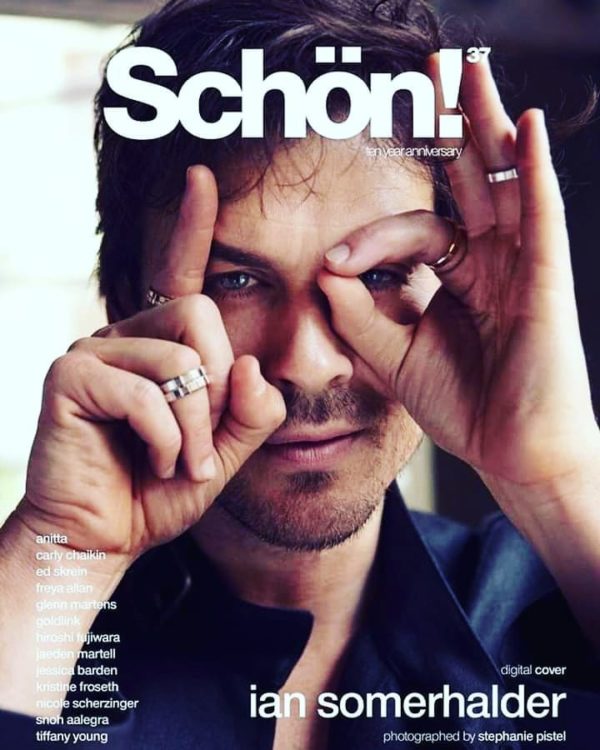 Actor Ian Somerhalder does an oh-so-clever one-eye sign on the cover of Schön! magazine. 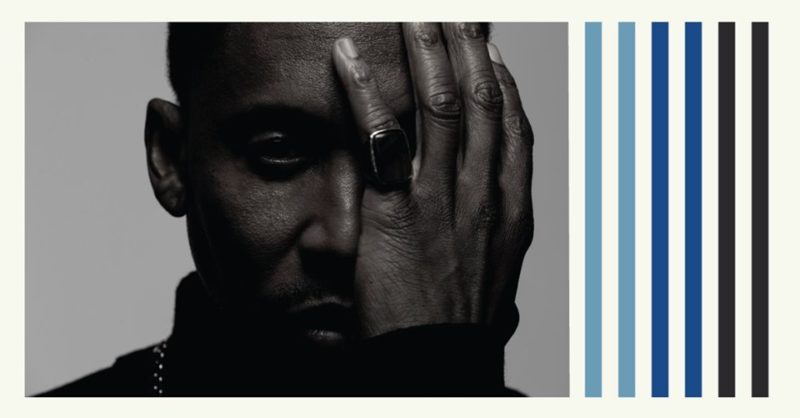 R&B singer Raphael Saadiq is back after an 8-year hiatus. Of course, in order to remain in the industry, he has to throw up the sign. This is the picture used to promote his new tour and album. 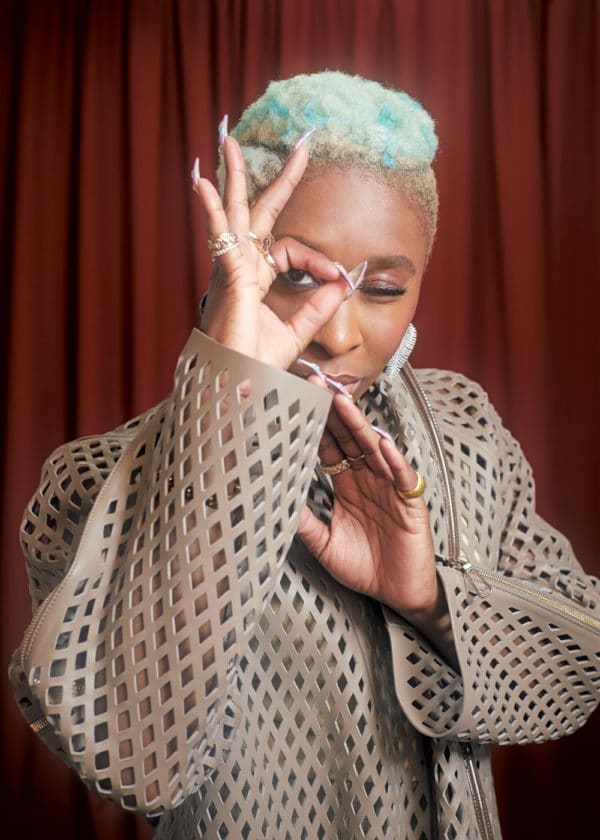 British actress Cynthia Erivo also needs to make ridiculous hand signs on camera to remain in the good graces of the elite. 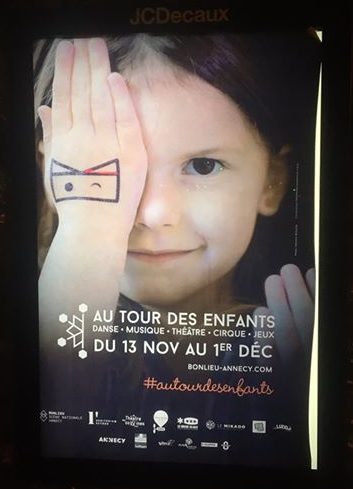 A reader from France sent me this bus stop ad. The title says “Au tour des enfants” which means “Children’s turn”. Is it the children’s turn … to do the one-eye sign? 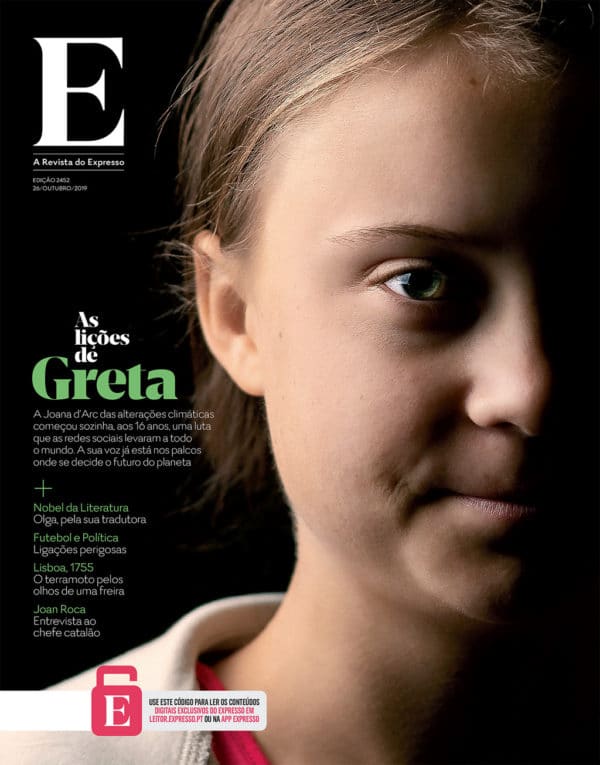 Here’s yet another magazine cover featuring Greta Thunberg and yet another pic of her with one eye hidden. On this cover, she is compared to Joan of Arc. Read my article The Elite Machine Behind Greta Thunberg to understand what’s really going on with her. 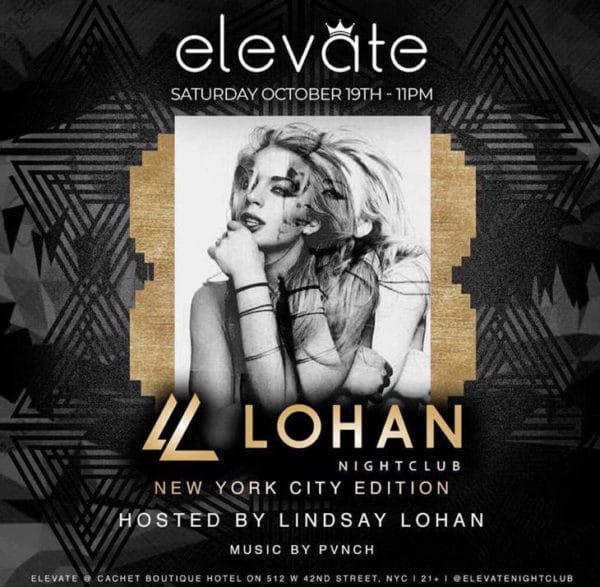 Ever since the launch of this site, Lindsay Lohan was identified as one of the most obvious MK Beta Kittens in the entertainment industry. Other than speaking in strange accents, the actress got involved with a long and strange list of “boyfriends” (handlers?) around the Middle-East. More recently, she’s been spending time with Saudi Crown Prince Mohammed bin Salman. Prior to that, she was involved with a Greek businessman who made her part-owner of a nightclub named Lohan. The pic promoting the nightclub features a one-eyed Lohan. Theres also a fainter double version of her – a symbol used in MK programming to symbolize dissociation. In short, this pic represent Lohan as an MK slave. 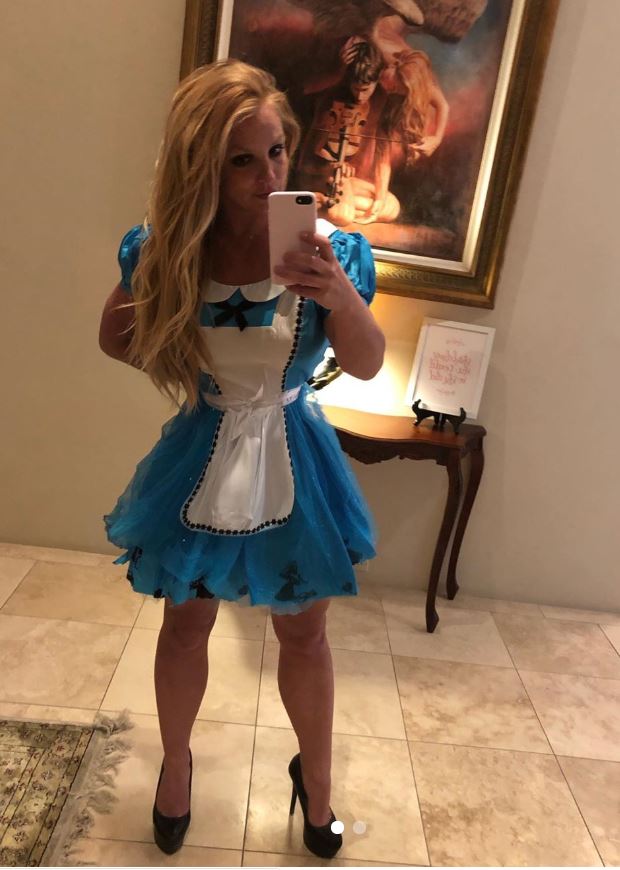 Speaking of obvious MK slaves, Britney Spears dressed up as Alice for Halloween. Alice in Wonderland is the most prominent programming script in Monarch programming, where the slaves are told to go “through the looking glass” towards dissociation. Her handlers are making fun of her situation. 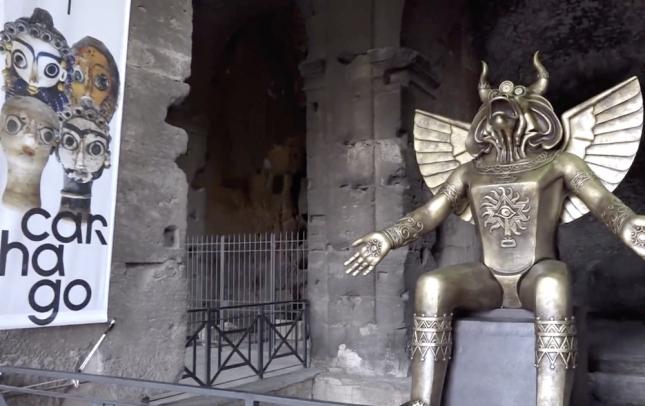 To promote a municipal art exhibit, the city of Rome placed a massive statue of Moloch – the ancient god to which child sacrifices were made – right at the entrance of the Rome colosseum. The statue is a prop from Cabiria, a 1914 movie about Carthage, its wars and its bloody rituals. 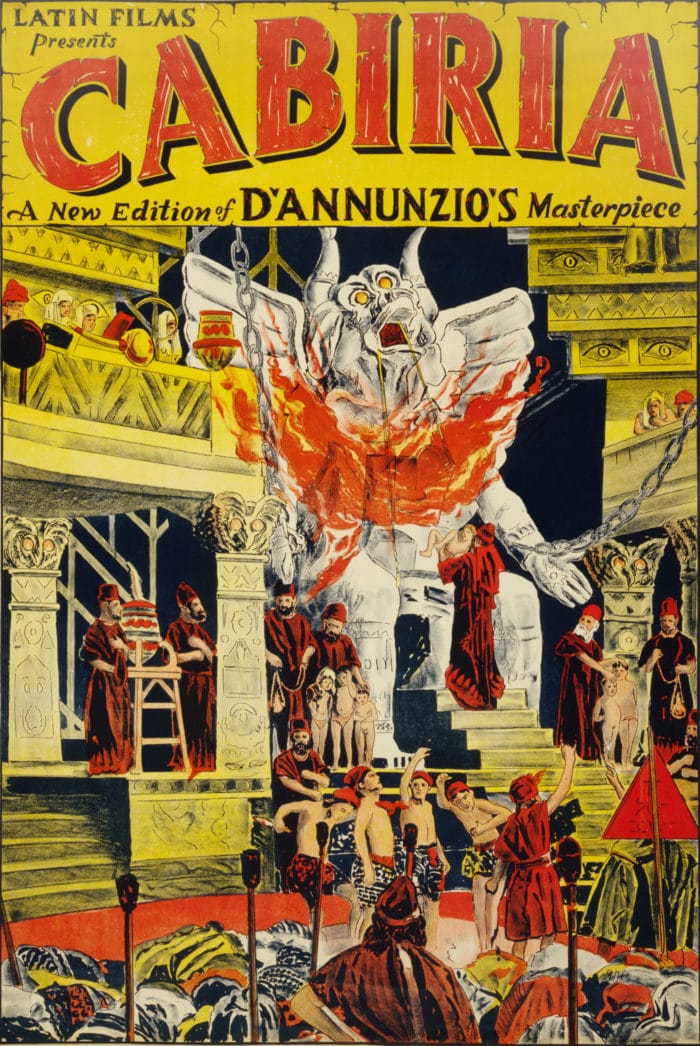 A poster of the movie Cabiria depicting priests offering children in sacrifice to Moloch. 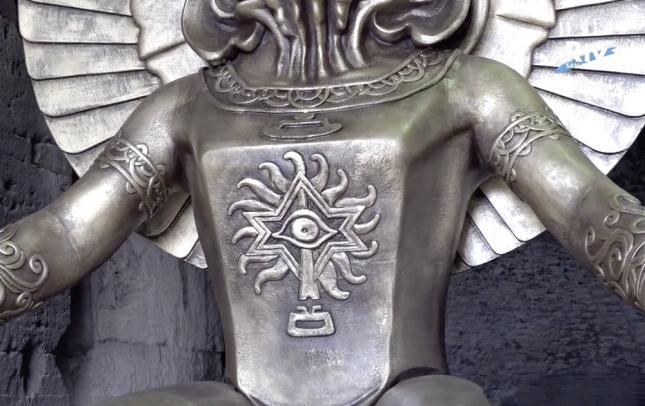 The occult elite’s symbolism is in plain sight, yet not many actually see it.