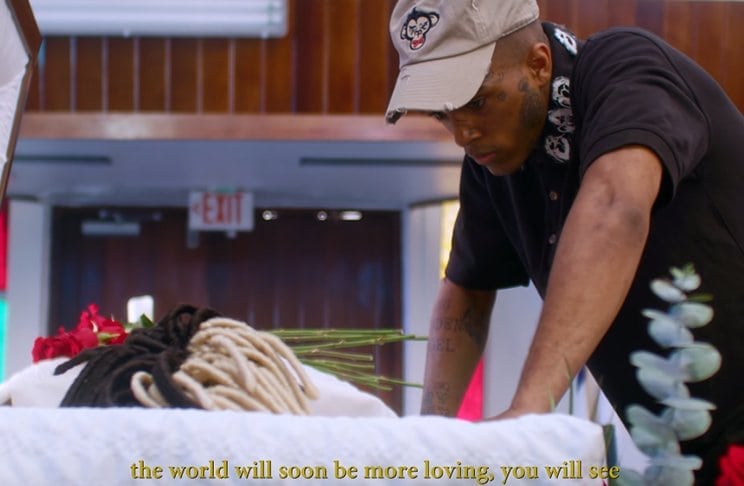 In a posthumous video released ten days after his death, XXXtentaction attends his own funeral and communicates with a mysterious being. Here’s the meaning of this symbolic videos.

The death of XXXtentacion on June 18 – at the young age of 20 – has startled and saddened his millions of fans. Ten days later (and one day after X’s funeral), the video for SAD! was released and his fans were startled again: The video portrays X attending his own funeral and fighting his own dead body. What is happening here?

The video quickly became #1 YouTube and many of X’s fans (who are often very young) are utterly confused. The comments say: “What does this mean?”, “How did he know?”, “Is he still alive?”, etc.

The fact that the video was written and “creative directed” by X himself makes the video even more unsettling. It is as if he had a premonition that his own death was coming.

This entire situation is heavily reminiscent of 2Pac’s death. 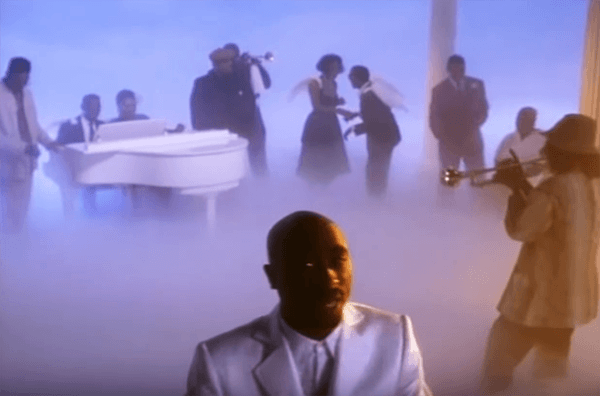 In his final video, 2Pac is in heaven with other artists who died young such as Jimi Hendrix and Bob Marley.

While XXXtentacion did not reach 2Pac’s legendary status during his short lifetime, he did share many similarities with the iconic rapper. Indeed, both 2Pac and X had explosive tempers, constant problems with the law, and “beefs” with several other rappers. On the other hand, they also both made it a point to do good deeds and to put out positive messages to the world. This constant duality in their character made them complex human beings whose eventful lives that attracted interest and fascination.

Furthermore, both 2pac and X liked to dwell on spiritual manners and both predicted their impending deaths in their final months. Finally, shortly after the demise of both 2Pac and X, a final prophetic video is released where they appear to be singing from beyond the grave.

X’s last video, SAD! foretells his death in a chilling matter while depicting the spiritual battle that was raging within him at the time. In my article The Troubled Life and Symbolic Death of XXXtentacion, I explained the dark occult symbolism surrounding X and the bizarre circumstances surrounding his death. The video of SAD! gives more insight into the spiritual struggle of X in the weeks leading to his early demise.

The video begins with a mysterious entity introducing itself by the name of “gekyume”.

Gekyume is a word that was created by X himself which he defines as:

“A different state or next universe of thought”

In the video, gekyume is an ethereal being that appears to be from the spiritual world. The fact that it has no voice and that it speaks through subtitles gives the feeling that the conversation is happening on a telepathic level. The entity proceeds to ask personal questions to the viewers, as if it is looking to get to know and possibly “attach itself” to them.

As gekyume continues to ask questions, X enters a church and walks down the aisle.

Above X is a blue banner with the words “A reign of blessings”.

The banner refers to the biblical verse Ezekiel 34:26:

“And I will make them and the places round about my hill a blessing; and I will cause the shower to come down in his season; there shall be showers of blessing.”

In its biblical context, the verse refers to God liberating the children of Israel from captivity. Theologian Albert Barnes’ commentary on this verse states:

“The blessings here foretold are especially those of the old covenant. The wilderness (or, pasture-country) and the woods, the places most exposed to beasts and birds of prey, become places of security. Under the new covenant Sion and the hills around are representative of God’s Church; and temporal blessings are typical of the blessings showered down upon Christ’s Church by Him who has vanquished the powers of evil.”

Considering the fact that X portrayed himself as an unabashed satanist (he often wore “Team Satan 666” hats), walking inside a church with biblical references to vanquishing the powers of evil seems out of character. However, it fits the overall concept of the video: Profound metamorphosis.

X walks by memorial pictures of himself – an eerie foreshadowing of his own open casket funeral which happened the day before the release of this video.

X looks over his own dead body.

The body inside of the casket wears X’s old dualistic half black-half white hairstyle, which he had when he was arrested for abusing his girlfriend in 2016. In the video, this hairstyle represents his old self, which he wants dead forever.

As X looks at his own body, we are transported into an ethereal dimension.

We are taken to a “dark place” through X’s eye, the “window to the soul”.

Inside X’s soul, a mysterious hooded figure stands before him.

“here is my demand. you will spread love throughout the world, praise and joy unto my name and change the overall cycle of energy we are digesting. the world is in need of change, humans must learn to love and compromise rather than destroy”

The entity wants X to become a positive figure in the world, in opposition to his troublesome past.

Back in the church, things start to get ugly.

The corpse grabs X by the throat.

It turns out X’s old self is not dead yet: His troubled past is still there to haunt him and drag him down. The dead body gets out of the casket and the two Xs start fighting, turning the church into a wrestling ring. The new X grabs the old X and slams him to the ground. However, the fight is not over.

In the dark spirit world, a watch flies by, indicating that time has passed.

The battle is now taken outside.

The new X beats the crap out of the old X as people cheer him on.

This public street battle could represent X’s attempts to bring a new positive image and message to his fans. But it is not enough.

Back in the dark place, the hooded figure tells X:

“they do not understand you, do you not fear? your worst enemy is yourself you seem unbothered. (…) it is your memories that hold you to the person that you were to the amount of light you can become…you must understand the power of your mind”

The figure tells X that his fight with his old self is not a physical one, but a mental and spiritual one.

Back to reality, X uses the power of his mind to effortlessly beat his old self.

We are then taken back to the spirit world, but now it has a white background.

In the spirit world, the new X finally lays the old X to rest … for good.

A handwritten note appears next to the old X.

The bottom part of the note says:

The note appears to confirm that X has successfully changed his ways.

Back in the dark place, the entity says:

“you have done well at battling yourself. your demon seems to honor your efforts. are you satisfied?”

X then stands up and the screen turns to black.

In this context, the word “demon” is a rather interesting choice. A demon is defined as an “evil spirit or devil thought to possess a person or act as a tormentor”. Who or what exactly is X’s demon?

Did X free himself from his demon’s hold on him through positive change? Or is the hooded entity actually X’s demon? The ending of the video is somewhat open-ended.

Sad! was “written and creative directed” by XXXtentacion himself, which makes the final product highly personal and introspective. It puts on display a conflicted soul that is looking to find a steady moral compass after years of aggressive teenage angst. It also highlights a desire for change. Through the guidance of a guardian angel (or demon) X looks to enter a transitional period towards a new life.

In many ways, the video is similar to other “industry” videos analyzed on this site where artists kill their old self to embrace a new, industry-approved self. While in most of these videos the new self is often darker and edgier, things are different in X’s video. The rapper with a past of violence and satanism (a combo the elite loves) seems to want to steer away from the darkness and become a new and improved person.

Was X truly looking change his life? In the Instagram video he posted after he signed with a major record label and a few months before his death, X said:

“If I’m going to die or ever be a sacrifice, I want to make sure that my life made at least five million kids happy or they found some sort of answers or resolve in my life regardless of the negative around my name, regardless of the bad things people say to me.”

After being signed to a major label, Xthreatenedd several times to quit the industry. Did he witness the true darkness of the elite and decided to move away from it? Did he realize that there was much more to the elite’s satanism than edgy symbols and got horrified by it?

Sadly, X life’s was cut short during this apparent period of transition. And while the entity in the video asked X to “change the overall cycle of energy we are digesting”, his violent and disturbing death has only fed it further. That truly is “Sad”.