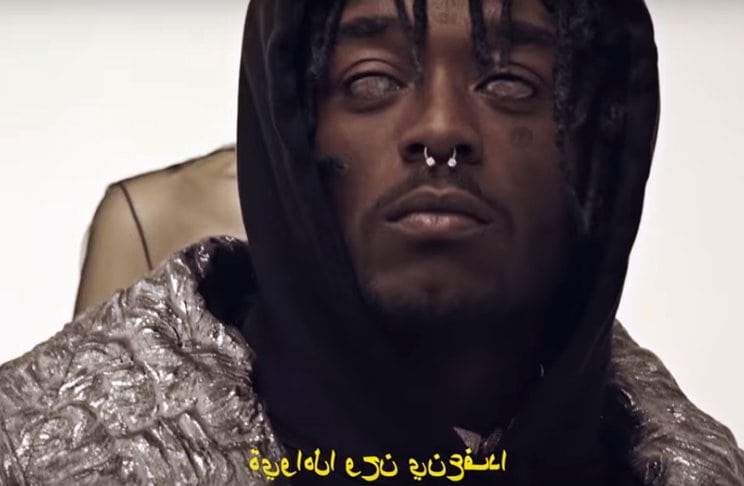 Lil Uzi Vert has been described as a “the future of hip-hop”. Apparently, the future is extra satanic. His video XO Tour Llif3 is proof of it.

Say “Lil Uzi Vert” quickly a couple of times. Does it sound like Lil Lucifer? Well, that’s pretty much the point of this article. Thanks for tuning in and see you next time.

Oh, wait, I didn’t even get into the XO Tour Llif3 video. Because, this thing is blatantly satanic, complete with ritualistic symbolism. If in the past, some rappers were accused of being “devil worshippers” using obscure evidence, Lil Uzi Vert makes things rather obvious. Unfortunately, that doesn’t prevent this young artist from being insanely popular.

Lil Uzi Vert has a “rabid” following, hundreds of millions of YouTube views, and enjoys industry acclaim. Most recently, XO Tour Llif3 won the “Song of the Summer” Award at the 2017 MTV Video Music Awards. Music magazine Noisey describes Lil Uzi as being “particularly charismatic, a natural entertainer who is for better or for worse, yanking people into the future.”

Lil Uzi does indeed represent a new generation of hip-hop artists who sing about being sedated on Xanax and who enjoy wearing women’s clothing. 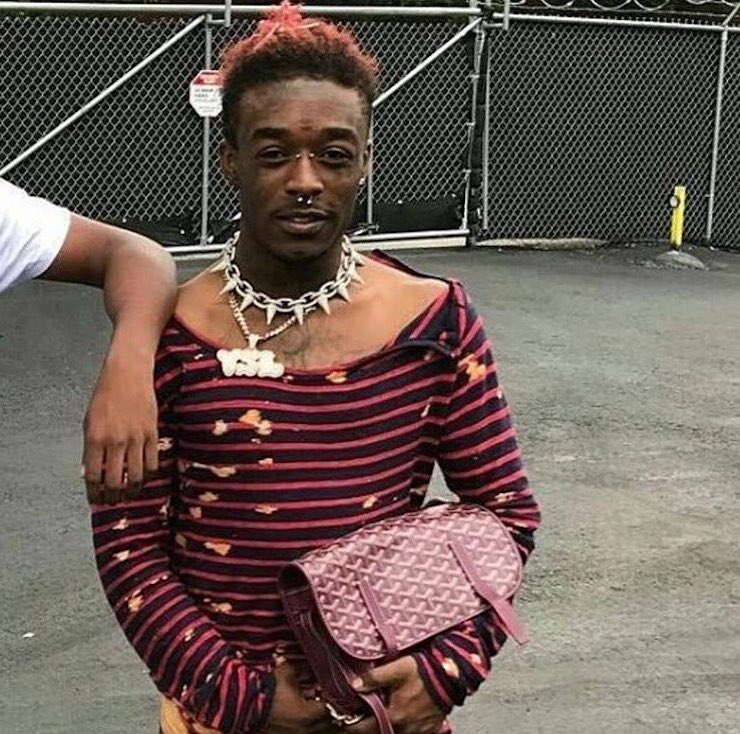 Lil Uzi at the 2017 Billboard Music Awards. Fun fact, he reportedly paid $2,400 for that pretty sweater.

More importantly, Lil Uzi enjoys wearing specific pieces of jewelry that sum up everything he is truly about. 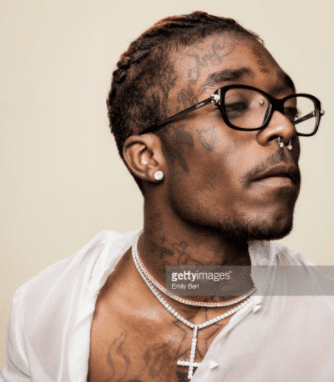 The “official portrait” of Lil Uzi at the Billboard awards. Around his neck: An inverted cross. 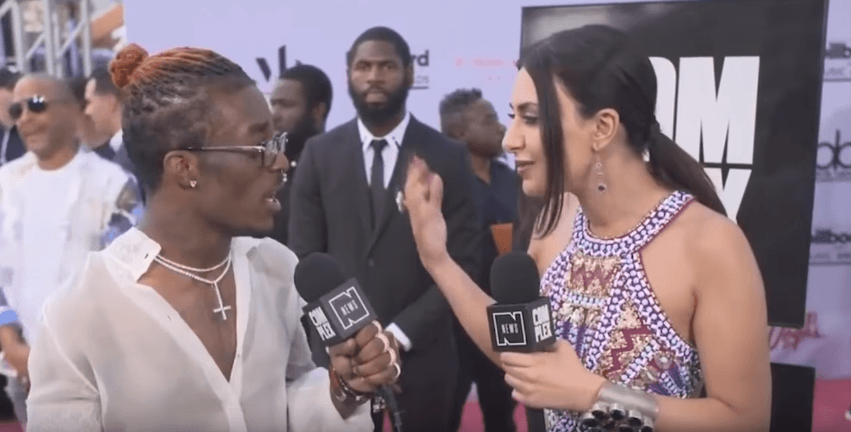 Lil Uzi wears a big inverted cross chain during an interview with Complex.

As Vigilant Citizen readers surely know, the symbol of the inverted cross is a staple in satanic symbolism. It plays on the classic black magic practice of inverting and corrupting Christian symbols for ritualistic purposes. 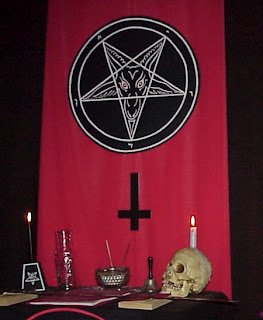 A Church of Satan altar featuring an inverted cross. 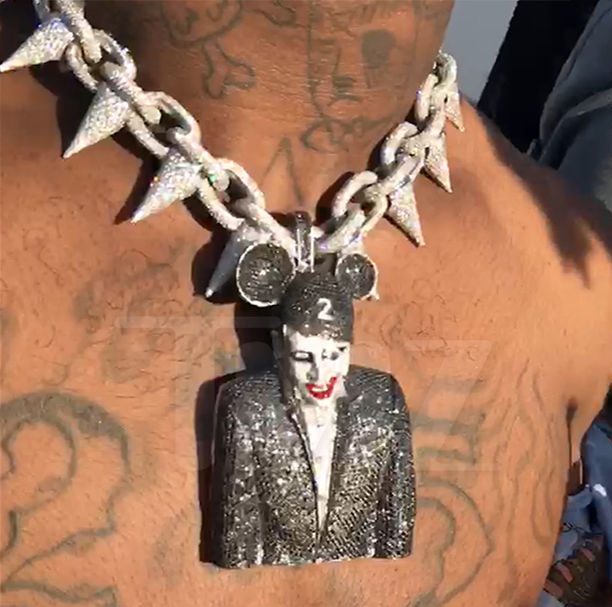 Lil Uzi calls Marilyn Manson “his greatest inspiration”. While he probably enjoys his music, there appears to be another thing linking both artists: The Church of Satan. 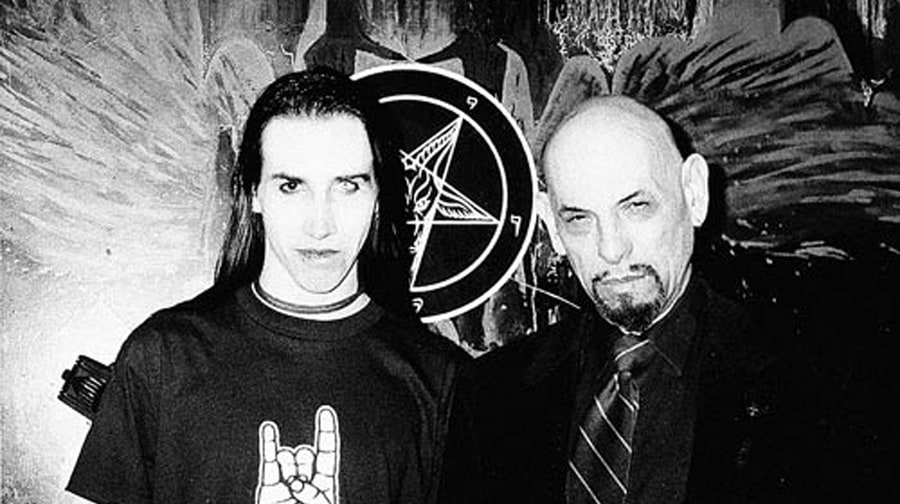 Marilyn Manson posing with Anton LaVey, the founder of the Church of Satan.

Manson is very fond of LaVey and his Church. Indeed, the AntiChrist Superstar was deeply involved with the organization.

On an off-day from the band’s tour with Nine Inch Nails in San Francisco, Manson received a call telling him that Church of Satan founder Anton Szandor LaVey requested his presence. “Near the end of our visit, he said, ‘I want to make you a Reverend,’ and gave me a crimson card certifying me as a minister in the Church of Satan,” Manson wrote in his autobiography. “It was like an honorary degree from a university.”

Consequences: Manson penned the foreword to LaVey’s final book, Satan Speaks!, which came out in 1997. “Anton LaVey shared his magic, and I think it has made this wretched f-----g planet a better place,” he wrote in it.
– Rolling Stone, The Golden Age of Grotesque: Marilyn Manson’s Most Shocking Moments

Knowing all of this information, would you be surprised to know that Lil Uzi’s most popular video is pure satanism?

However, the video takes the song to a deeper level by adding a layer of dark spirituality to it. Although clearly present, usually allusions to satanism in mass media are somewhat subtle.

For instance, one curious feature of the video is the Arabic subtitles.

Arabic subtitles appear to be translating the song’s lyrics.

According to the co-director of the video Alvin Sonic, the subtitles were added because he liked how they looked “wrong”. There is indeed something “wrong” with the subtitles: They are backward. And, in Islamic theology, backward writing is associated with black magic. Indeed, a Sihr (meaning a hex or a spell) almost always entails writing verses from the Quran backward, sometimes in blood. It is sometimes referred to as the “language of Sheitan” (Satan). Later in the video, we see Lil Uzi writing in blood.

While some might believe that it was simply a mistake from the video director’s part, the rest of the video also points to it being intentionally satanic. Hence, this other scene.

Here Lil Uzi lays in a bathtub, fully dressed. There’s like 6 inverted crosses around his neck (we only see one in this screenshot).

The scene is juxtaposed with a bloody possessed girl laying in bath water as well. Are they the same person? Are they connected somehow?

Then, Lil Uzi is thrown out of the bath by the guy filming. It’s a reverse baptism.

This scene plays on the same black magic concept that also applies to inverted writing, inverted crosses, and inverted pentagrams. It is about the corruption of “holy” symbols for black magic.

In the above scene, Lil Uzi reverses the religious rite of baptism, which consists in being submerged in water. While the represents purification, regeneration, and admission to the Christian Church, the reversing the rite represents the exact opposite. In short, it is satanic, Black mass stuff.

On top of the spiritual symbolism, the video goes deep into another agenda: The culture of death. Indeed, pop culture loves to make death appear cool, edgy, and fashionable. The hook of the song, which is repeated about 424 times, is about suicide.

She said: “I am not afraid to die.”
All my friends are dead
Push me to the edge

Most people in the video are dead. Or about to die. Or a zombie. Or possessed. Or something.

Lil Uzi strangling himself. They say that “eyes are the windows to your soul”. White eyes symbolically mean no soul.

There’s also a bunch of undead girls walking around a cemetery and doing death-related stuff.

This girl might need a bath and an exorcism … Probably an exorcism first or the bath won’t go too well.

Lil Uzi writes something in blood … until he passes out. So cool.

While everybody’s going through hell, The Weeknd is chilling. He’s also telling us that this is all sanctioned by the occult elite – their rulers.

During the bridge, Lil Uzi chants a somewhat enigmatic line.

This refers to a core concept in modern-day satanism. From the Church of Satan website:

Satanist understands that all Gods are fiction, instead of bending a knee in worship to—or seeking friendship or unity with—such mythical entities, he places himself at the center of his own subjective universe as his own highest value.

Lil Lucifer ends the video with a sign that sums up this entire video.

A little shoutout to the devil before the end of the video.

Lil Uzi Vert is considered, by many, to be the “future of hip-hop”. He apparently embodies the sound, the style and the attitude of the new generation of entertainers. Judging by the enormous amount of people who consider his stuff to be “lit”, he’s definitely striking a chord with young people.

He’s also part of a new “hip-hop lifestyle” that mixes heavy pill popping to bring extreme numbness, death idealization, mental health issues and a fascination with dark spirituality. On a wider scale, one can argue that society, in general, appears to be moving in that direction. Is popular culture influencing society or is society influencing popular culture? Both. This entire lifestyle is currently being facilitated and promoted through various channels.

Like countless other products analyzed on this site, XO Tour Llif3 leaves viewers with an unsettling aftertaste, a gut feeling that something “wrong” was just witnessed. While the video might be a representation of the personal inner-turmoil of Lil Uzi Vert, it also represents the outer-turmoil of pop culture today.

The elite is looking to create a generation of people that is debased, depressed, and heavily medicated. Mentally and physically numb, these subjects are then exposed to the powerful symbolism of black magic, which is based on profound spiritual corruption. Stars who can make this entire lifestyle appealing are welcomed to the music industry with open arms … until these arms strangle them to death.