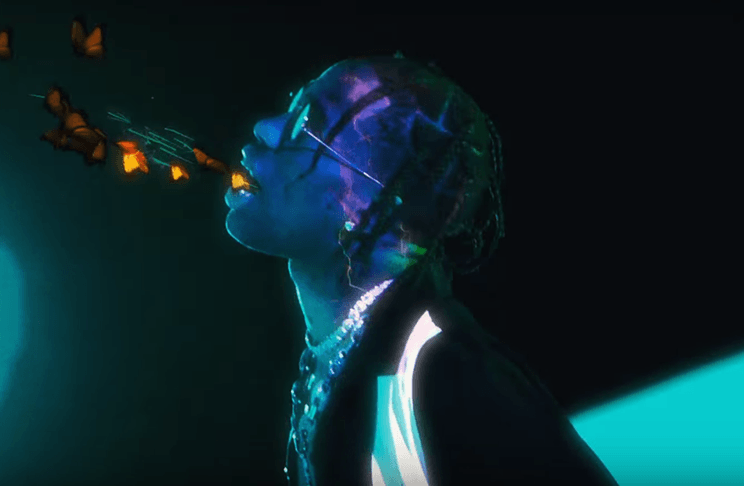 Behind the psychedelic visuals of Travis Scott’s video Butterfly Effect is a hidden message, told through symbolism: Travis Scott’s introduction to the elite’s entertainment industry and the Monarch mind control system.

Travis Scott is a rapper and producer who began his career behind the scenes, collaborating with the likes of Kanye West, Jay-Z, and Madonna. He then launched his solo career and, with the hit song Antidote, Scott found commercial success. Soon, he was propelled to the forefront of the rap game. After the release of his second album, Birds in the Trap Sing McKnight, Scott cemented his trademark sound and got a taste of superstardom. Shortly after, things started to become … symbolic.

While Scott is sometimes criticized for “rapping about nothing”, a clear theme has emerged from his latest works: Monarch programming. (If you don’t know what that is, please read this article first).

Indeed, it appears that Scott has been recruited to promote the elite’s MK symbolism to his hordes of young fans. When a new artist shows talent, charisma and star potential, it doesn’t take long before they get recruited by the elite. Afterwards, their work becomes “tainted” with their agenda. Hence, Butterfly Effect.

If you need immediate proof, this screenshot taken from the video sums everything up in a single, powerful image:

Travis spits out butterflies after he gets hit by lightning (representing electroshock therapy).

Before I go further into the meaning of Butterfly Effect, let’s look at some of the things Travis has been associated with in the past months. They illustrate that the symbolism of Butterfly Effect is not simply about aesthetics, but about Travis Scott being used by the occult elite to promote its Monarch system.

Shortly before the release of Butterfly Effect, Travis Scott appeared in SZA’s video Love Galore. The song is apparently about SZA regretting getting back with an ex-boyfriend (played by Scott). However, the symbolism of the video takes things to another, darker level.

In the video, SZA and Travis Scott hang out while Monarch butterflies fly around them.

In the bedroom, SZA ties up Scott to the bed and slaps the crap out of him.

SZA then goes to the window and looks outside, towards someone waiting in a car.

That person is holding a big wooden stick. A Monarch butterfly sits on the person’s hand, hinting that this is a product of Monarch programming.

That person then goes inside and savagely clubs Travis Scott to death as we hear horrific screams. Lots of blood splatters on the ceiling.

We then see the killer sitting and laughing with blood all over her. A Monarch butterfly sits on her shoulder.

Fun fact: The killer’s shirt has a pattern that resembles the Masonic square and compass.

So what does it all mean? Apparently, SZA hired a crazy murderer to kill Travis Scott. Or, knowing that Monarch programming is used to train assassins, the Monarch butterfly sitting on the killer might hint that she’s a product of MKULTRA.

Is the video a warning to Travis? Does it depict the fate of the celebrities who do not act according to plan, i.e. getting killed by a tool of the elite?

No matter what the case may be, Love Galore is yet another video that features gratuitous blood, violence, and murder. Travis has been sucked into the toxic world of Monarch culture. And speaking of toxic …

Chilling With the Jenners

Although they are extremely uninteresting, I have found myself writing about the Kardashians and the Jenners SO MANY TIMES. Why? Because they’re the chosen “first family” of Hollywood and embody everything that is wrong with the industry. From the sex tape initiation to the countless fashion photoshoots dripping with Beta Programming symbolism, not to mention Caitlyn Jenner’s media-hyped sex change, the Kardashians are used to serve the agenda industry elite. Even worse, the family has turned into a spider web of Black Widows who attract high-profile celebrities before essentially destroying them (#whereisKanye).

Sadly, Travis Scott appears to be the latest to get stuck in that sticky web, as he is Kylie Jenner’s current boyfriend. He recently made tabloid news because he was caught grabbing Kylie Jenner’s tushie by some paparazzi.

As usual, mass media completely overlooked the most important part of the above picture: WHAT THE HELL IS KYLIE HOLDING? 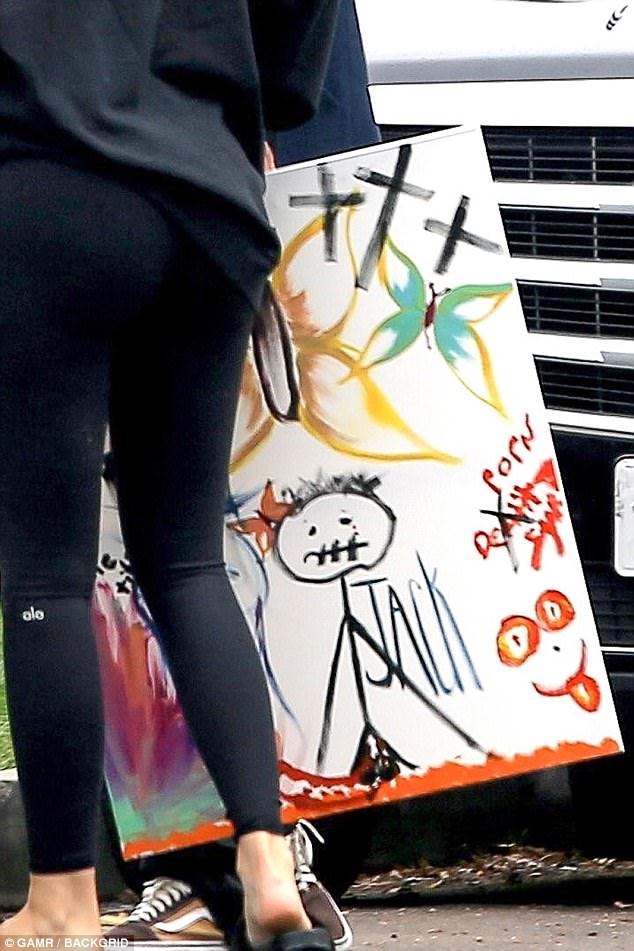 This painting is reminiscent of images drawn by actual Monarch survivors (i.e. Kim Noble). Why is Kylie walking around with this thing?

I’ve described this painting in a recent edition of Symbolic Pics of the Month:

The “painting” features a stick figure with its mouth sewn shut and a butterfly on its head. Something red appears to be oozing out of the figure’s bottom. The painting also features big butterflies, crosses and the name “Jack”. In other words, it contains a bunch of symbols associated with Monarch programming. Relevant fact: Kylie and Travis recently got matching butterfly tattoos. Watch out, Travis.

This is what Travis Scott’ gift to Kylie for her birthday. 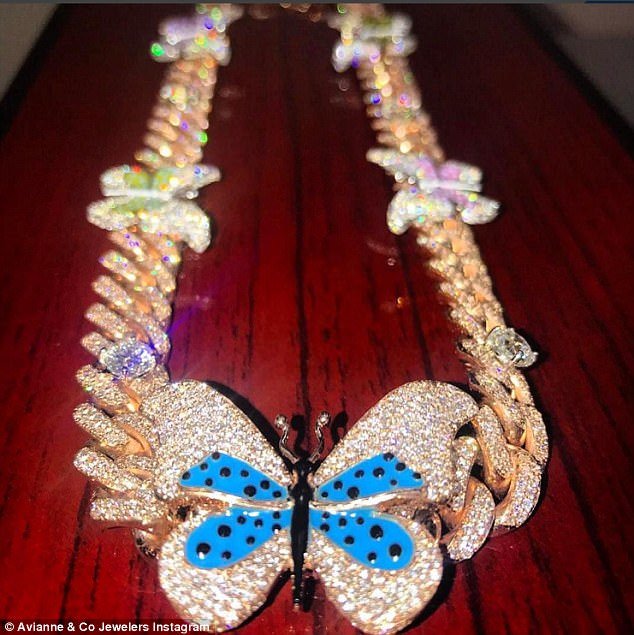 Considering the painting we saw above, the butterfly is more than just a butterfly. It is about being part of the MK system. The imagery around Travis points directly to it. And now, let’s look at the video for Butterfly Effect.

The term “Butterfly Effect” originates from chaos theory and states that small initial differences may lead to large unforeseen consequences over time. Therefore, we can assume Travis Scott’s goal is to explain how the little things he did in the past lead to his huge success and lavish lifestyle.

For this life, I cannot change
Hidden Hills, deep off in the main
M&M’s, sweet like candy cane
Drop the top, pop it, let it bang (Pop it, pop it)

However, there’s some double-entendre going on here. Indeed, “Butterfly Effect” can also mean “being under the effect of the Monarch system”, which would mean the exact opposite of the fun and freedom implied by the lyrics.

Hidden Hills is an upscale neighborhood north of Los Angeles that is home to Drake, Kylie Jenner (and the rest of the Kardashian/Jenner clan—including Kanye West), Miley Cyrus and many other industry pawns. Why is “success” automatically associated with living in this specific geographical region? Because it is the HQ of the Hollywood elite and it is where it partakes some of its darkest deeds. While living in a posh mansion in North LA appears awesome, it is basically a prison for many celebrities owned by the elite.

M&M’s refer to MDMA pills – aka Ecstasy. While many take this drug for its euphoric effects, it is also used in Monarch programming.

Ecstasy aka XTC, Adam, MDMA is an illegal designer drug, but it’s used by the government & cult programmers. Empathogens, like Ecstasy, enhance trust between the recipient & the programmer. ItS effect lasts for several hours.
– Fritz Springmeier, The Illuminati Formula to Create a Mind Control Slave

Drugged inside the headquarters of Hollywood elite. The initial dream turns into a claustrophobic nightmare.

In the video, Travis rides around in a sports car while girls dance around him and do sexy stuff. However, the symbolism surrounding these things imply that they are all “owned” by an extremely oppressive system.

One model licks and bites into an apple with butterflies on it – a symbolic way of representing being drugged for MK programming.

Some models literally spit out butterflies, a rather blatant way of portraying Monarch slaves.

Notice the makeup around this girl’s mouth.

The lines extending from her lips recall a brutal form of torture known as the Glasglow Smile.

GlaSglow Smile: A nickname for the form of torture that involves cutting a victim’s face from the edges of the mouth to the ear, the cut, or its scars, form an “extension” of what resembles a smile. Usually the victim is given a small cut, around 1/4″-1/2″, in the corners of the mouth and is then further injured by kicking, stabbing, or other means, causing them to scream and the cuts to further tear.

Does this “creative” makeup actually refer to an MK slave being subjected to violent trauma?

One thing is for sure, Travis Scott himself is subjected to a violent form of trauma in the video.

Travis Scott is severely hit by a lightning bolt at the end of the video. I guess that’s better than being clubbed to death by a psycho lady.

Notice how Travis’ brain is highlighted in red, implying that the lightning is working on his mind. He spits out butterflies meaning that he’s now a product of Monarch programming.

The lighting is a clear reference to the most used form of torture in trauma-based mind control: Electroshock therapy. Through violent shocks, the victims are pushed towards total dissociation, enabling the handlers to create alters.

The video ends with a super-mega Monarch Beta slave emerging from a sports car.

In short, through a veil of fun and psychedelia, the video puts into play a bunch of young, stylish people under the control of Monarch programming. While the video appears to portray the carefree lifestyle of a rapper with lots of money, its symbolism tells another story: The Hidden Hills is a prison full of soulless drones and Travis Scott is involved with the same people that have caused Kanye West to completely break down.

Butterfly Effect is a classic example of the insidiousness of pop culture: Although it appears to be about fun and freedom, it is actually about the exact opposite. It markets the horrors of Monarch programming in a cool and mesmerizing visual package.

Travis Scott has been “recruited” by the Hollywood elite and the intense Monarch symbolism surrounding him clearly demonstrates it. Him being involved with the Jenners is a way to introduce him to the dark side of the industry while making him a household name. Let’s hope he won’t end up being yet another young man broken by the bewitching spell of Hollywood’s first family.