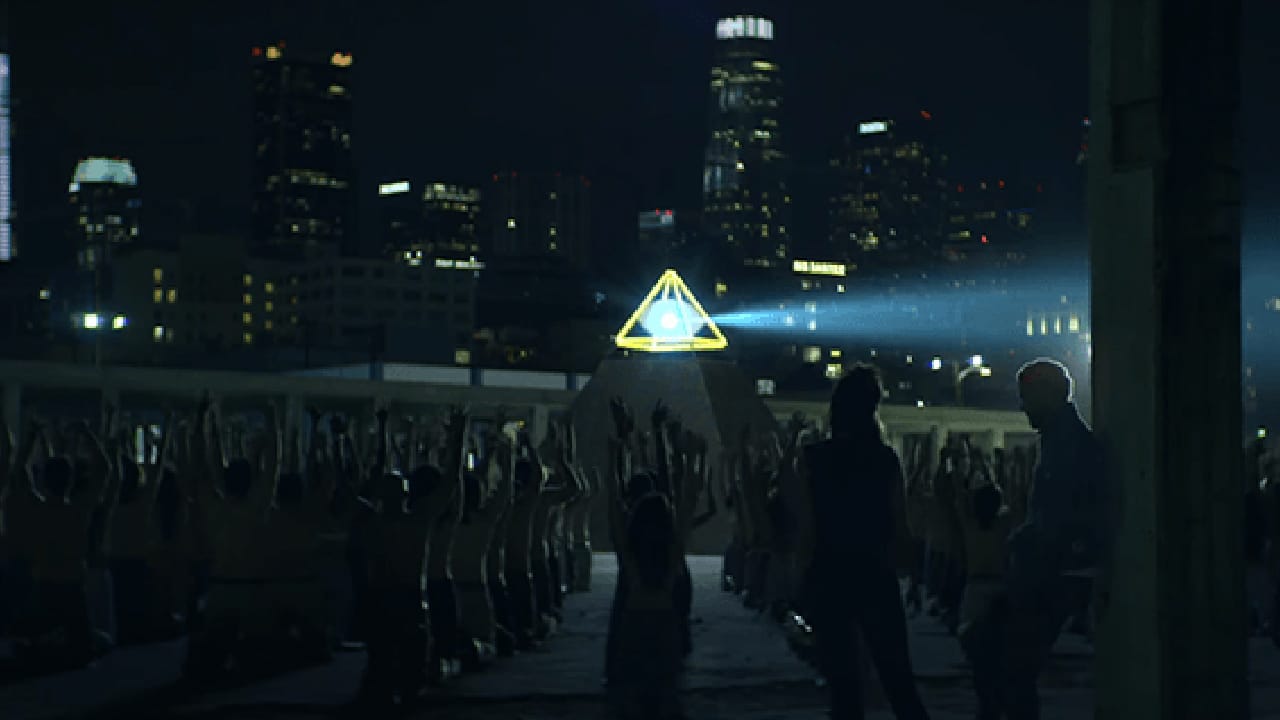 What is the meaning behind Justin Timberlake’s Supplies? Why are there people worshiping an Illuminati pyramid? Here’s a look at the intense symbolism of the music video Supplies.

In the most striking scene of the video, a crowd of people worships a gigantic Illuminati pyramid that emits light. Then, Reyna, who plays the role of a rebellious leader, sets it on fire. Later, the world is apparently in ruins. What’s going on? Is the video a call for an uprising? Is Justin Timberlake now a rogue, rebellious, troublemaker?

“Agenda-setting is the creation of public awareness and concern of salient issues by the news media. As well, agenda-setting describes the way that media attempts to influence viewers, and establish a hierarchy of news prevalence. Two basic assumptions underlie most researches on agenda-setting:

– the press and the media do not reflect reality; they filter and shape it;
– media concentration on a few issues and subjects leads the public to perceive those issues as more important than other issues.

These core statements were established by measuring the changes in salience through the use of surveys with the presence of more frequent news coverage.”
– Wikipedia, “Agenda-Setting”

There’s a lot of agenda-setting going on in Supplies. Like so many other videos out at the moment, it helps define what the masses should care about (or obsess over) these days. However, in order to reach young people, the agenda-setting is clothed as a revolt against an oppressive system. But there is no actual “revolt” going on, just an industry puppet doing what he is told for the cameras. Then, he cashes his check from RCA records and goes back to his mansion.

Justin Timberlake began his show-business career at age 11 as a cast member of the Mickey Mouse club, alongside several future industry stars. 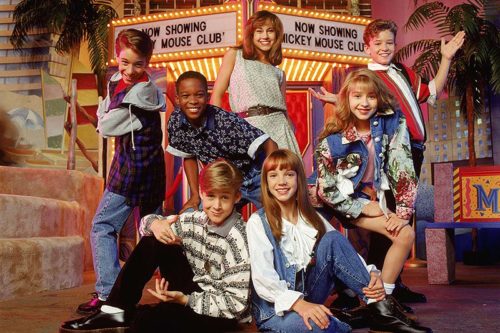 Timberlake then found super-stardom as the leader of the boy band NSYNC. 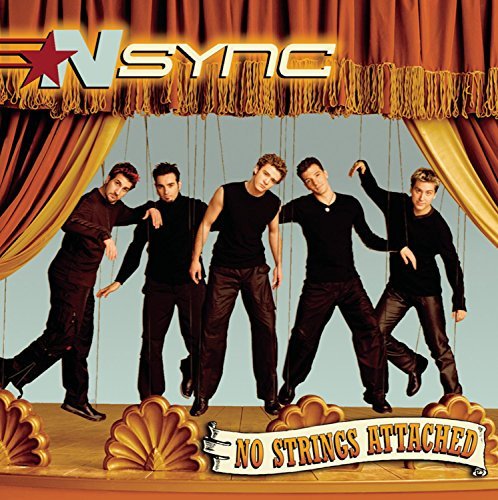 The album cover of No Strings Attached features the group (including Justin) as literal puppets.

In 2002, Timberlake launched his solo career. Once again, album art was highly symbolic. 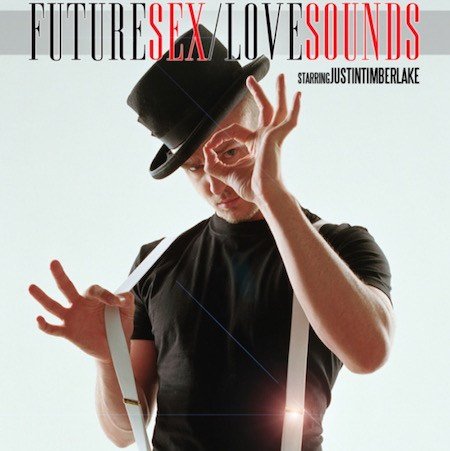 Dressed in A Clockwork Orange-inspired outfit, Timberlake does the 666 one-eye sign of the industry pawn. 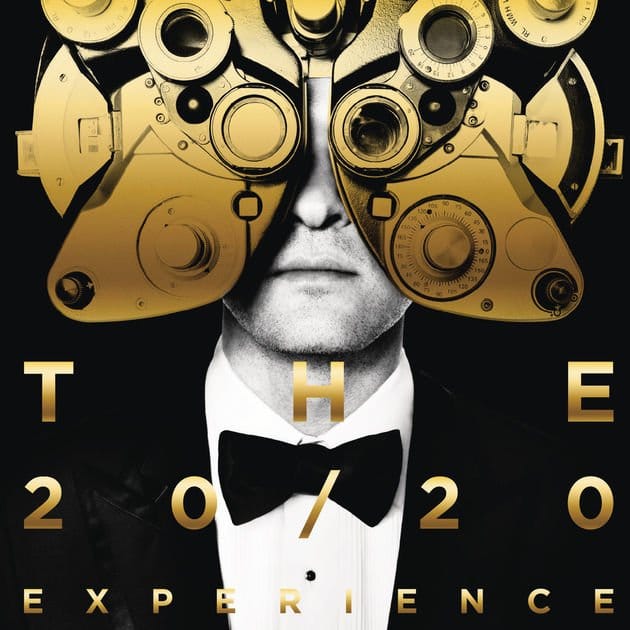 The cover of his last album features a subtle (yet still very present) one-eye sign.

One week before the release of Supplies, Timberlake released Filthy, a video that features him being replaced by … a dancing robot. 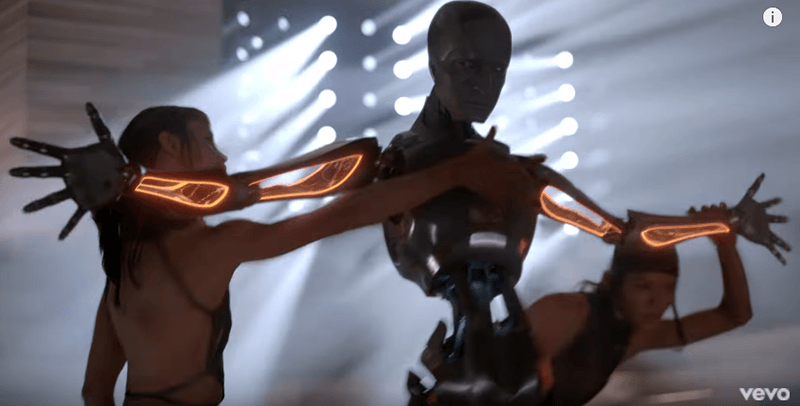 In Filthy, Timberlake stands backstage while a (rather creepy) robot replacement performs sexy dance moves on human dancers. He ultimately wins over the crowds as everybody cheers for the robot.

The concept of the video is somewhat reminiscent of the movie Metropolis where Maria – a leader of the people – is replaced by an android to do the elite’s bidding. (Read my article about the movie here).

At the end of Filthy, Timberlake “glitches out” and disappears. Was he just a projection? Was he replaced by the android?

Everything about Timberlake’s career points towards him being at the service of the industry and nothing has changed with his latest album. He is still signed with the elite-owned RCA records and as such, anything he puts out is perfectly in accordance with the elite’s agenda.

Contrary to Filthy (which is basically four minutes of watching a robot dance), there’s a lot going on in Supplies. Throughout this flurry of messages and symbolism, there’s a core message being communicated: This is what you need to be angry about in order to be “woke”.

More precisely, it is about focusing on specific issues, framing them in a specific matter, and imposing a specific social-political “solution” to them.

At the beginning of the video, Justin watches several screens at one, all of which display events of the past year: Trump, Harvey Weinstein, anti-racism demonstrations, gun control, the Vegas shooting, etc.

The scene appears to be a reference to the 1976 sci-fi movie The Man Who Fell to Earth where an alien (played by David Bowie) watches 12 TVs at once while becoming an alcoholic.

After absorbing all of that mass media, Justin goes outside where some bizarre stuff is going down.

Some very pale people, dressed in all white, harass Justin’s girl, who is dressed in black. Are those white faces a reference to White people?

Does this guy represent “gun nuts” who are against gun control?

Justin watches this scene unfold from across the street. Do the floating white umbrellas represent White America being somehow  “protected” from bad weather?

Justin doesn’t like what he’s seeing: He punches the guy in white and leaves with the girl in black.

In the following scene, Justin dances around as light effects depict people slipping under the wall and running away, in a rather clear reference to Trump’s wall with Mexico.

Here, Justin and his “army” gather at Los Angeles Public Library as flags on the walls burn. Why are the flags burning? Interesting fact: In 2011, I published an article about the occult symbolism of this very library.

We don’t see it in the video, but there’s actually a pyramid topped by a torch of illumination right above them. This indicates who they’re really fighting for.

In the next scene, Justin and his girl find themselves in a creepy place of worship.

People bow before an Illuminati pyramid.

Eiza – who is apparently a rebellious leader – sets the pyramid on fire with a Molotov cocktail.

Did Eiza set fire to the Illuminati? Not really.

Notice that there’s American money burning as it flies from the pyramid. In the previous scene, flags were burning. Now, money. Are these allusions to the destruction of national flags and national currencies … to be replaced by a one-world government and a one-world currency? The elite’s ultimate objective?

The same people who were worshiping the pyramid are now cheering for Eiza. The masses are idiots prone to groupthink. How about thinking for yourself for a change?

The new leader’s disposition is reminiscent of an iconic picture of the past. 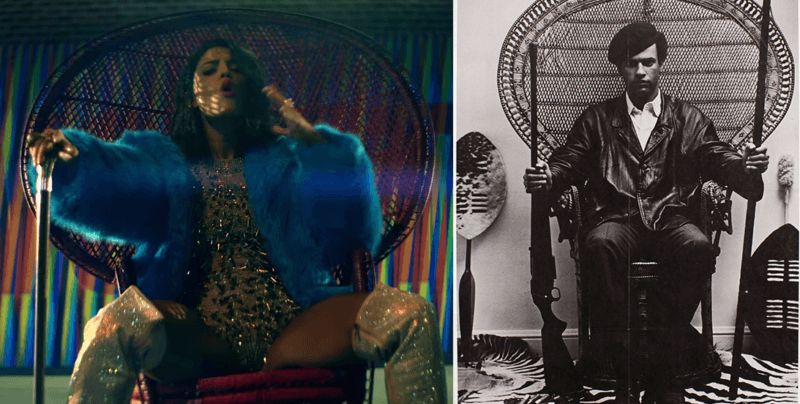 This scene recreates the famous picture of Huey P. Newton, the leader of the Black Panther Party. There’s a lot of racially charged stuff in the video.

Here, people float in the air with illuminated rings around their eyes. When Justin and Eiza remove the rings, people fall off. They are now “woke”.

Throughout the video, various symbolic pictures quickly flash on screen.

A protest sign saying “The Muslim ban is White supremacy”.

RIP Amerikkka – an inverted American flag cut in half.

After all of this intense noise, the video ends in a cryptic matter.

Justin emerges from the ground as dirty children gather around him, in a post-apocalyptic world. Eiza is looking fresh and clean.

What happened there? A nuclear explosion? Why is everybody dirty except Eiza? Did she know that the destruction was coming?

The timing of this scene is rather odd as Supplies was released only days after the Hawaii false nuke alert.

On January 18th, an alert was sent to all devices in Hawaii about an incoming ballistic missile. A few days later, the Japanese network NHK sent out a false alert saying: “NHK news alert. North Korea likely to have launched a missile. The government J alert: evacuate inside the building or underground.” The alert was then corrected.

The hook of the song alludes to a post-apocalyptic setting, where Justin (maybe representing the elite) has all of the “supplies” necessary to survive.

The video ends with a little boy talking directly to the viewers. And he’s pretty angry.

Why is the music video telling viewers to “die already”?

Supplies is very similar to a music video analyzed last year: Katy Perry’s Chained to the Rhythm. In both videos, the singers are depicted as “revolutionaries” who are “woke” and who stand up against the powers that be. However, in both cases, the “revolution” is actually 100% in line with the world elite’s agenda. Supplies and Chained to the Rhythm are part of the new “sanctimonious Hollywood” trend where constant virtue-signaling somehow gives celebrities the right to define what should people think and believe in.

However, there’s a lot of hypocrisy going on. In my article Katy Perry’s “Chained to the Rhythm” Sells an Elite-Friendly “Revolution”, I highlight the various ways Perry’s real-life actions contradict her music video moralizing. In her very next video, Katy was back at pushing elite-sponsored degeneracy. Indeed, Bon Appétit was about her being prepped like a piece of meat for an elite cannibalistic ritual while she’s singing about her being banged by a bunch of guys. So woke.

In Supplies, Justin Timberlake appears to strongly support the #metoo movement. However, less than two years ago, Timberlake worked with Woody Allen, claiming it was a “dream come true”, despite the fact that Allen’s has long been accused by his adoptive daughter of sexually assaulting her.

Dylan Farrow even called out Timberlake on this hypocrisy:

“I struggle with how a powerful force like Justin Timberlake can claim to be in awe of the strength of women and stand with them at this #MeToo moment and then in the next breath say that working with Woody Allen is a ‘dream come true.”
– Business Insider, Dylan Farrow calls out Justin Timberlake for saying working with Woody Allen was a ‘dream come true’ then claiming to support victims of Hollywood sexual misconduct

Supplies also deals with race. But the hypocrisy is even stronger there. Some of the symbolism is clearly “pro-Black”. However, not unlike elsewhere in mass media, the new “pro-Black” is not about bettering the lives of Black people: It is about fomenting hatred and division.

While many get their education from Hollywood celebrities while eating Tide Pods, actual History is being forgotten. The elite that’s currently pandering to Black people is the same elite that’s been oppressing Black people for decades. Who allowed crack to enter Black neighborhoods, turning droves of people into zombies? Who allowed the killing of so many Black leaders? Who allowed police brutality on innocent Black people? The answer: Those who are truly in power, no matter who’s President. These things happened when Republicans and Democrats were in power. These things happened while Barak Obama was in power. It doesn’t matter. They do not actually believe that “Black Lives Matter”. No lives matter … except theirs.

Supplies is the elite communicating to the masses using extremely manipulative techniques and classic double-speech. Through the use of virtue signaling, the video panders to the idealistic tendencies of young people. However, what are the actual values being promoted? Anger, hatred, and division between races, sexes, and political affiliations. The more the masses are divided, the more the elite can control each group efficiently. Divide and conquer is the oldest trick in the book.

There’s a great reversal going on here. The Illuminati (aka the world elite) is portraying the acceptance of its agenda as “fighting the Illuminati”. Mass media is in full force, using all of its resources to frame what’s happening in a specific narrative. Why? Because we are in a pivotal place in history.

The elite’s motto is Ordo Ab Chao: Order Out of Chaos. We are living in chaotic, confusing times and Trump and is a perfect agent of chaos. The response to him, and all of the issues highlighted above – the agenda – will be Order. And when “order out of chaos” is a reality people will actually bow down to the Illuminati pyramid.

The Occult Meaning of Iggy Azalea’s “Savior” : A Wedding With the Dark Side

“Peek-a-boo” by Red Velvet: Why Do Men Keep Getting Killed in Music Videos?