Last November, I posted a short news article entitled Taylor Swift’s Performance at the 2012 AMA’s: A Typical Initiation Ritual where I described how it symbolically represented an occult initiation ritual. For the 2013 Brit Awards, Swift brought back that same symbolism as she performed again her single I Knew You Were Trouble. While the setting of the performance was different than the one of the AMA’s, its symbolic meaning and the color code used was identical. Furthermore,  the ritualistic symbolism of the entire thing was even more blatant. Here’s the performance.

As it was the case for her AMA performance, Swift begins her song dressed in a virginal white dress, symbolizing purity and innocence. She stands at the door of some kind of temple. 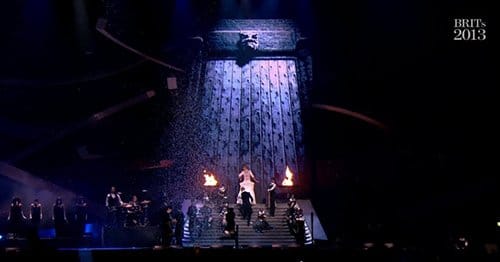 Swift stands at the door of a temple, signifying that she is not yet initiated. The burning fires emphasize the ritualistic aspect of the set while the horned head above the door hints that this temple is far from holy.

After dancing for a while in front of the temple, the doors open. The set then gets very fiery and the ritual begins. 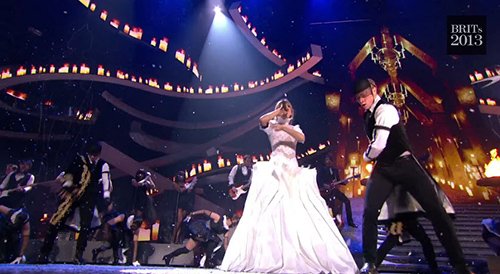 The screen behind Swift now displays the “inside” of the temple. If you look closely at where the horned head used to be, there appears to be another horned head now…

Do you see it?…Or am I seeing things? 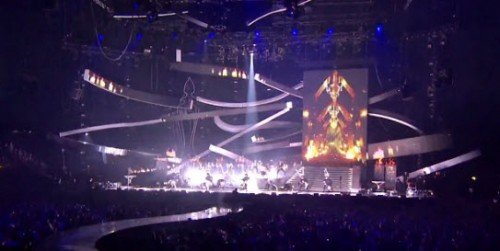 Looking at the screen from a distance (as if being one of the audience), it almost looks as if Baphomet was presiding over the whole thing. Or it might be an illusion…Or a calculated illusion…Not sure.

At one point, Taylor is surrounded by bunch of guys and emerges with a brand new outfit.

Taylor is now dressed in black, symbolizing the completion of her initiation. The “good girl gone bad” narrative is complete, once again. She lets her hair down and has a nastier attitude.

During her performance at the AMA’s, Swift also started singing with a white dress to end up in a sexier, black outfit. The fact that this exact change of costume color occurred again is proof that none of this is random. In fact, it symbolizes a very profound process and this ritualistic color code is used across the entertainment industry to underline occult meanings in performances.

Looking back at the beginning of her career, Swift was known for being very timid and down to earth. With the release of her last album, Swift embodied a new, feistier, nastier persona. This performance symbolically represents the same process, one that is apparently required to be in the good graces of the music industry. How many young female pop stars went from good girl to bad?

Some people who read my previous articles might ask: “Didn’t Taylor Swift get initiated during the 2009 VMA’s?”. Remember that these performances are not actual initiation rituals (which occur behind closed doors). Televised performances are meant to expose the public to the Illuminati’s rituals and symbolism in order to make it trendy and part of popular culture. As the occult elite knows all too well: The best place to hide something is in plain sight.

Why is Queen Elizabeth’s Nurse Wearing a Masonic Belt?

“Behind the Mirror”: Another Mind Control-Themed Fashion Movie