In 2013, I published an article entitled The End of April: A Time of Human Sacrifice where I explained the extreme importance of this time of year in occult calendars. Indeed, the last two weeks of April, which culminate on May 1st (aka May Day), could be dubbed the “most magickal time of the year” – but for all of the wrong reasons.

A quick look back a recent history reveals something strange: Many violent events involving mass deaths by fire (or gunfire) occurred during the last two weeks of April. Here are some examples:

If one looks further back in history (and outside of the US), one would find a long list of horrific events that happened between April 15th and May 1st. Most of these events feature the same characteristics: A large number of innocent victims who die by fire.

Throughout the years, this strange fact was observed by several sources. Here are some examples.

A CNN article about violence in April from 2011.

A Live Science article about violent events in April from 2013.

The conclusions of these articles are rather similar: “We don’t know what’s going on and we’re scared”. Although media sources acknowledge this bizarre April anomaly, they do not provide a rational explanation. Why? Because the truth is occult.

Here’s a summation of the significance of the end of April in occult calendars.

While the exact dates of occult rituals vary due to moon phases and other variables, there is nothing new about human sacrifices in April. Throughout the centuries and across civilizations, the second half of April was always a time of blood sacrifice. Those were often celebrated through the worship of Baal (or related deities).

The worship of Baal took many names (Enlil, Molech, etc.) and spread across several civilizations. Being a sun god and a god of fertility, rituals celebrating Baal took place after the vernal equinox (a time of rebirth) and often involved human sacrifice. 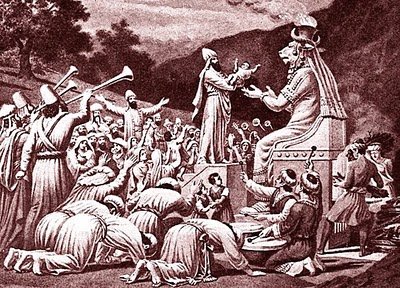 The sacrifice of a child to Baal in ancient Carthage.

An altar dedicated to Moloch: Fire and blood sacrifice.

This practice was also mentioned in the Bible.

Today, the ancient practice of blood sacrifices still exists. However, in this age of mass media, the occult elite partakes in mega-rituals made to be witnessed by the entire world. Why? For increased magical potency.

1. Trauma, stress, and mental anguish, sheer terror
2. The final act in the drama should be destruction by a fire; preferably a conflagration.
3. People must die as human sacrifices, especially children, since The Darkness views younger human sacrifice as most desirable”
– Ibid.

At the time of writing this article, the “magickal” time of year is not yet over. However, some events already fall right into this period’s “criteria”.

On April 15th, the famed Notre-Dame de Paris Cathedral was engulfed in flames, an event that was heavily mediatized across the world.

The spire of the Notre-Dame Cathedral broke down as the world watched in incredulity.

To those who know about the occult link between April and fire, the Notre-Dame event was difficult to ignore. And it only took a few hours before theories floated online.

To be honest, when I saw the footage, I immediately thought about the April occult agenda. However, another part of me thought: “This might only be an accident”.

No matter what actually happened, the footage of the fire – and its symbolic meaning – immediately reminded me of images that were posted on this site some years ago.

In the movie 9, a cathedral (which looks like Notre-Dame) is attacked by one-eyed robots and burns down. The scene represented the fall of Christianity and the brink of a new era (read my full article about 9 here). The movie was released on 9/9/9 – exactly 10 years ago.

In the viral video I, Pet Goat II, a cathedral crumbles down as a Jesus figure navigates towards sunlight. Once again, this represented the fall of religions (read my full article about the video here).

Was the Notre-Dame fire a symbolic attack on Christianity? Perhaps. However, I feel the need to mention an important fact: Notre-Dame is, in actuality, an occult temple. It was built by the Knights Templar (the ancestors of the Freemasons) and everything about it is 100% based on occult principles.

The “Scala Philosophorum” engraved on the Notre-Dame Cathedral, representing the 9 stages of alchemy.

Explaining all of the occult elements of Notre-Dame would require an entire book. However, it is safe to say that the Cathedral is nothing less than a physical representation of the occult elite’s beliefs and philosophy. Perhaps this is the reason why, shortly after the fire, prominent billionaires pledged hundreds of millions of Euros to rebuild this temple.

Less than a week after the Notre-Dame fire, the world witnessed an actual attack on Christianity. And it was on Easter Sunday. And, sadly, it fit exactly the “requirements” of the end-of-April sacrifices.

On April 21st, Sri Lanka was hit with a series of coordinated attacks in churches and luxury hotels, killing at least 290 people. The first wave of attacks struck during busy Easter services at churches in the heart of the country’s minority Christian community, in the cities of Colombo, Negombo, and Batticaloa.

The ruins of St. Sebastian’s Church in Negombo.

We need to take a step back and recognize the horrific, satanic and symbolic nature of these attacks: Hundreds of people were killed as they were in church, on a holy day, and celebrating the resurrection of Jesus Christ.

At the time of writing these lines, no group officially took responsibility for the attacks. And, while the Sri Lankan government blamed a little-known local jihadist group named National Thowheed Jamath for the bombings, the group did not come forward yet. Furthermore, authorities also believe that the bombers had international support. A government official stated:

“There was an international network without which these attacks could not have succeeded.”

Strange fact: Sri Lankan authorities were warned about a bomb threat a full two weeks before the attacks. Cabinet spokesman Rajitha Senaratne said at a press conference that the warnings were not passed on to the Prime Minister,

A tweet from a government official about the risk of a bombing dated April 11th.

My 2013 article about the Boston bombings, I wrote these words:

While many ascribe the occurrence of these events during the end of April to coincidence, the fact remains:  Mass violent events involving death and fire happen regularly during the same time period that is occultly dedicated to Baal, who is worshipped through fire and human sacrifice.

Sadly, in 2019, the “prophesy” was, once again fulfilled. To make things worse, the attacks occurred in the most satanic of contexts: Churchgoers were during Easter Sunday celebrations.

Hopefully, we’ll reach May Day without any other proof that the end of April is … the most “magickal time of the year”.