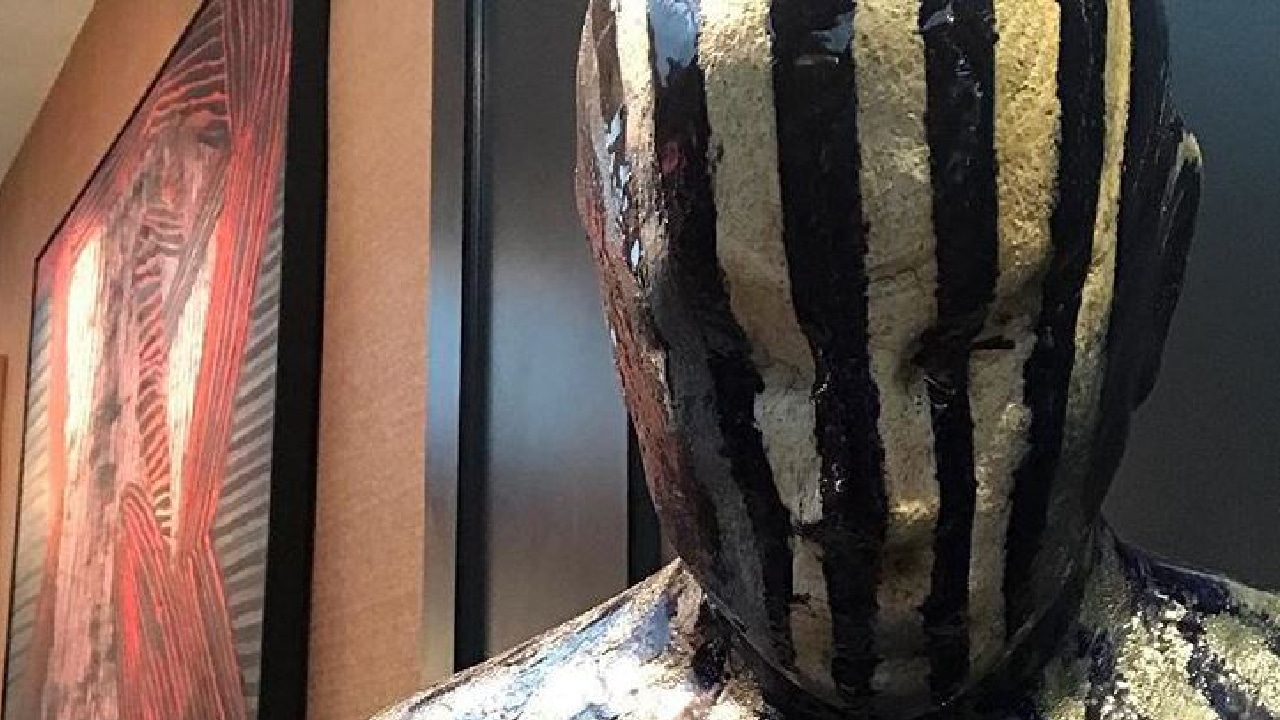 When asked the question “Do you want to be creeped out by the hotel you’re about to sleep in?” about 99.6% of people answer: “Of course not, are you crazy?”.Well, despite these staggering (made-up) statistics, Hotel Lucia seems to go out of its way to make its lobby as off-putting as possible.

At first glance, most people might brush off the art at this hotel as “typical Portland weirdness”. However, a closer look at the various pieces on display reveals that there actually a theme going on there. And it is kind of terrifying. It is almost as if the hotel is trying to send a coded message through symbolic art that something terrible is happening around there.

This is not my first article about creepy hotels. The 2013 article What’s Up With Room 322 at Hotel ZaZa? described the many strange features of a “secret” room at a stylish hotel in Texas. Other than the suspected two-way mirror, the room contains disturbing paintings of deformed faces coupled with the picture of a prominent Texas businessman.

The lobby of Hotel Lucia follows the same strange pattern: Disturbing art and pictures of powerful people. Let’s take a closer look at the hotel.

Described as “downtown Portland’s most historic hotels”, Hotel Lucia is home to the world’s largest permanent collection of black and white photographs. It is also home to some creepy art. The combination of these two elements creates a bizarre space, where one wonders if there’s an overarching theme going on here. 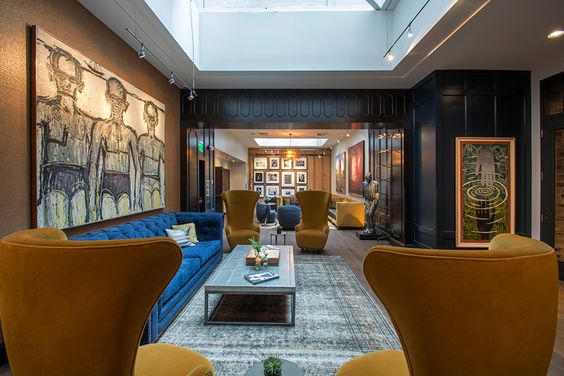 Visitors entering the lobby are greeted with a collection of curious works of art that are asking to be investigated. And this leads to a weird rabbit hole.

First, you are greeted with this painting. 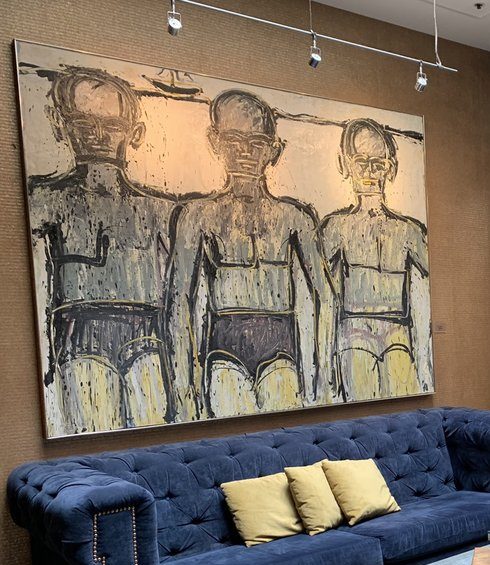 The painting is reminiscent of the strange paintings of children on display at Tony Podesta’s home. 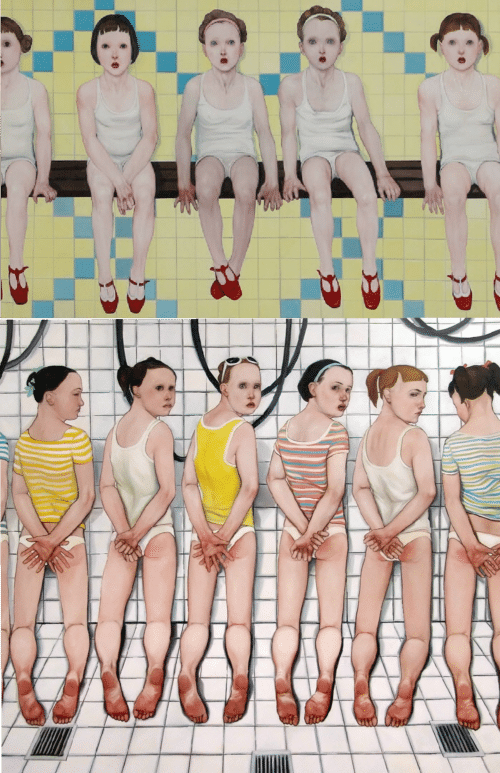 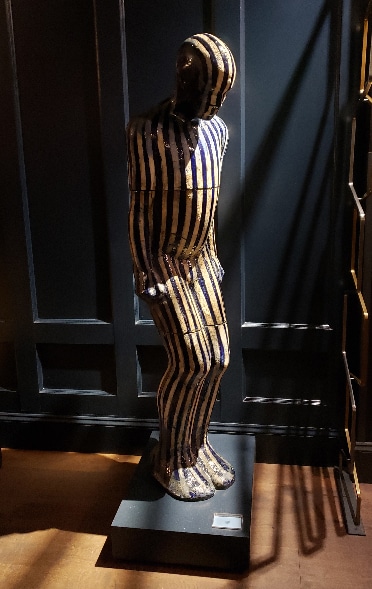 A sculpture of a young boy who appears to be restrained.

Everything about this sculpture screams out MKULTRA. The boy is covered in a dualistic striped pattern – a staple in Monarch mind control symbolism. The stripes are also reminiscent to jail bars. 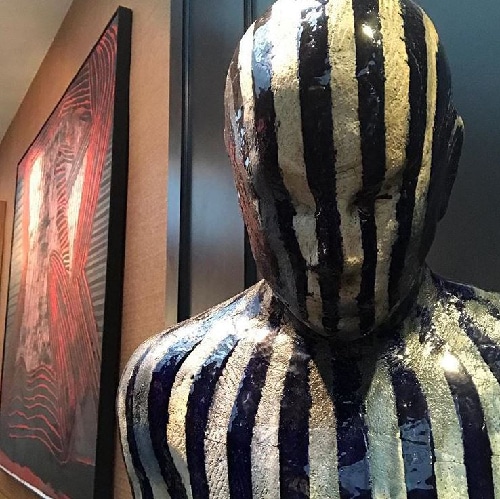 A mind behind bars.

Right next to this sculpture is a painting that uses a similar striped pattern. 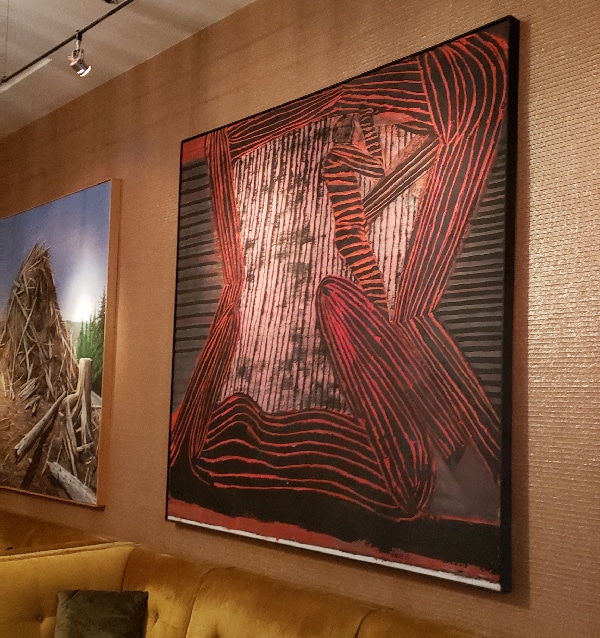 I am not exactly sure of what’s happening here, but there appears to be a small person holding a phallic object.

On the other side of the scultupre is a collection of smaller sculptures with the same theme of bondage and weirdness.

Five figures in the same position as the boy with various objects inside and around the body. Pure Monarch Programming.

Speaking of Monarch programming, another painting appears to be a direct reference to it. 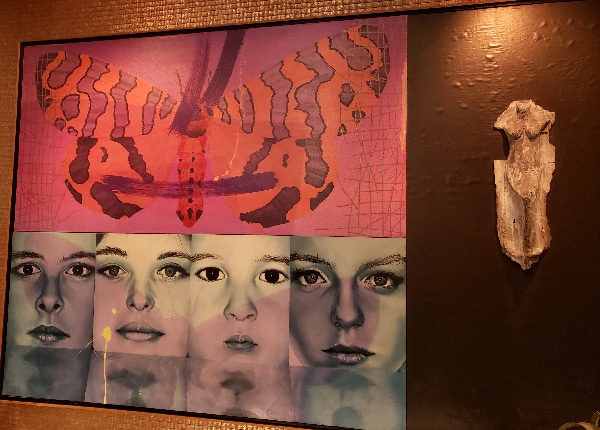 This painting features a butterfly (symbol of Monarch programming), the faces of four children and, on the right, the body of a child.

As one grows increasingly disturbed by this art collection, one encounters this monstrosity: 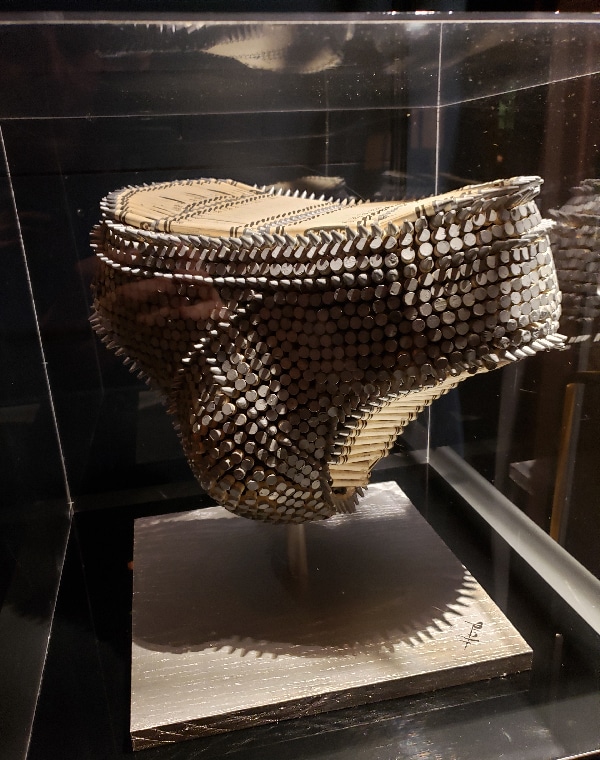 Underwear with a noticeable bulge made from crayons… which are used by children. What’s the message here? I mean, really. 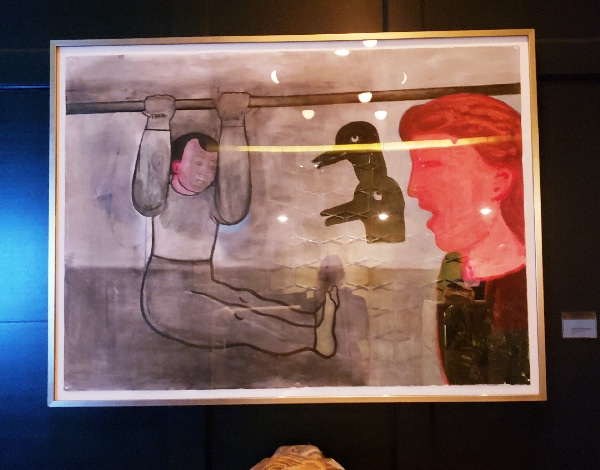 A child in a rather uncomfortable position, an adult that looks angry. And two ducks?

I honestly don’t know what is happening in that painting. It might depict a child being tortured while being screamed at by a person through some kind of proxy (the ducks). 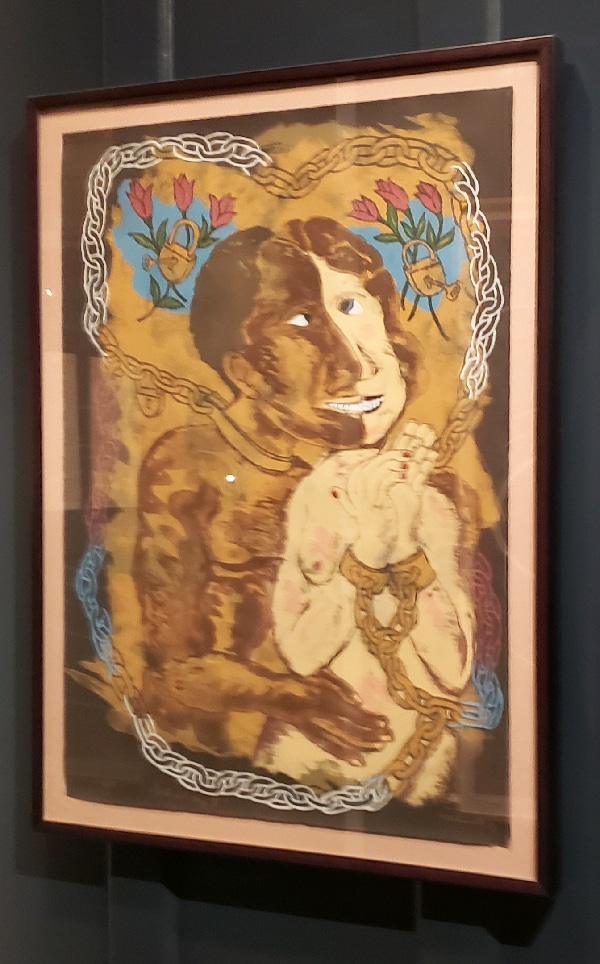 A black and a white person chained together. MK Slavery. 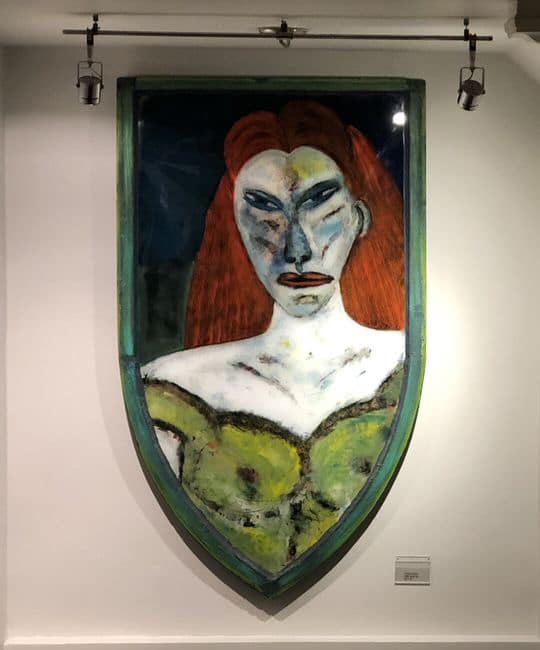 Can this woman look more evil? 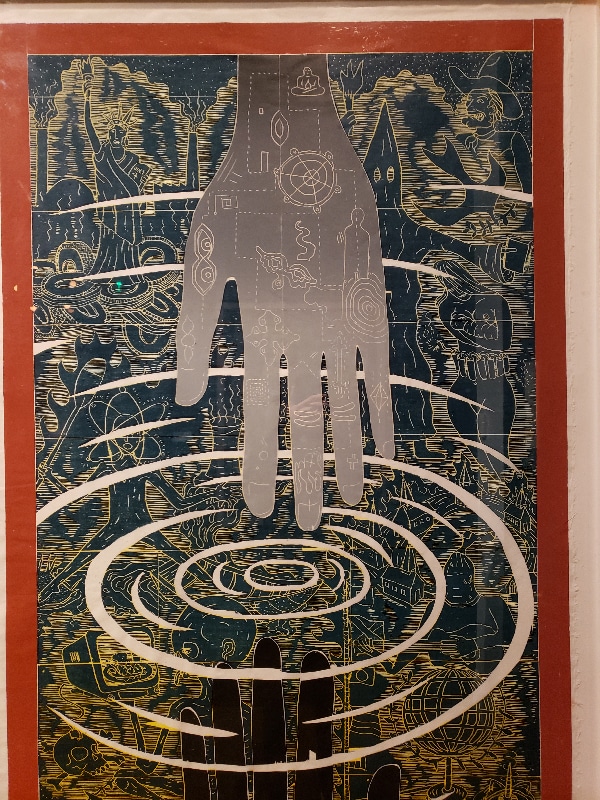 This is a color woodcut named “The Empty Hand” by artist John Buck. It is replete with strange images such as a woman holding a baby while strapped with bombs, churches burning, and loads of esoteric symbols. 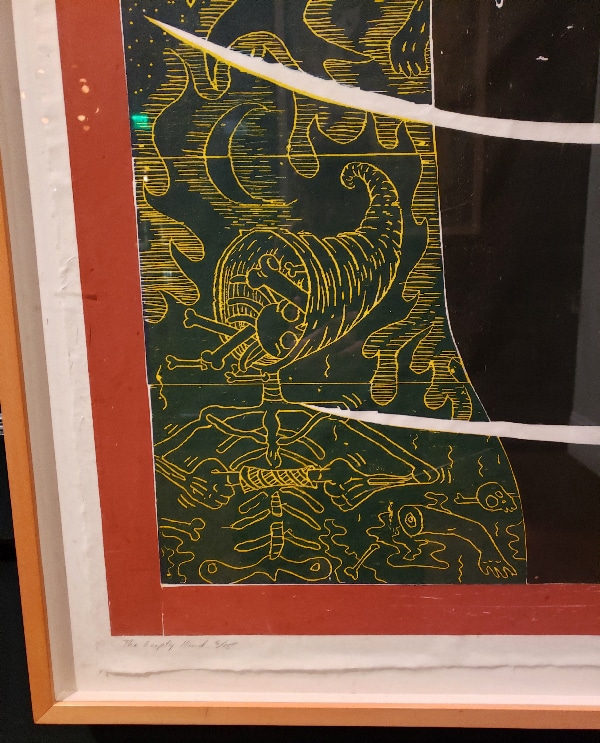 At the bottom are bones and dismembered body parts.

The general theme of the painting appears to revolve around war, pollution, hate groups such as the KKK and a whole lot of people dying. 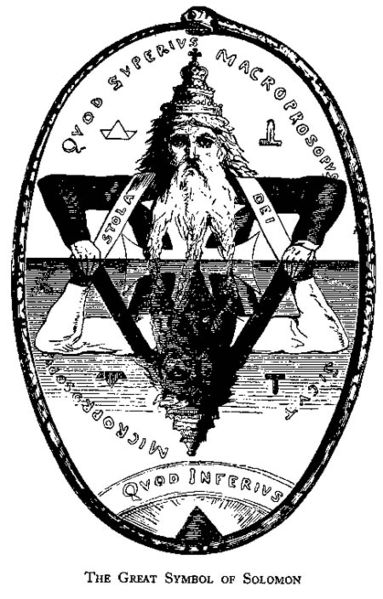 Buck’s piece appears to be inspired by the Great Seal of Somolon – one of the most important symbols in Western occultism which is based on the all-important concept of duality.

So, in this hotel lobby filled with imagery relating to pain, abuse, slavery and suffering, there’s a massive collection of pictures of celebrities and powerful people. The hotel’s official website states: 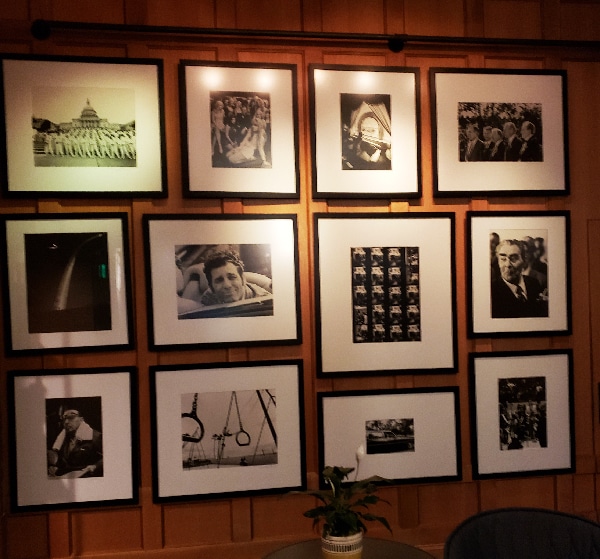 Next to the pieces seen above is a wall of pictures of Hugh Hefner and his Playboy playmates; Former Presidents Bush, Nixon, Carter, Ford, and Reagan; Kramer from Seinfeld; Soviet leader Leonid Brezhnev and …  a deserted park.

Lots of other pictures are scattered around the hotel. 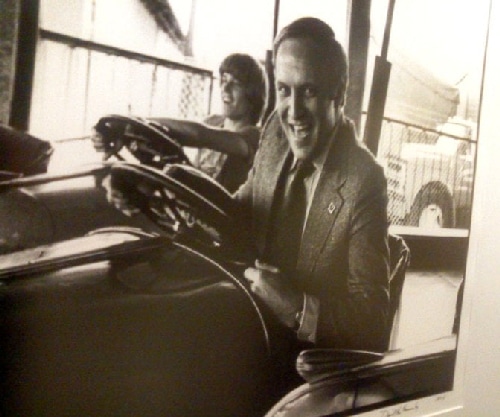 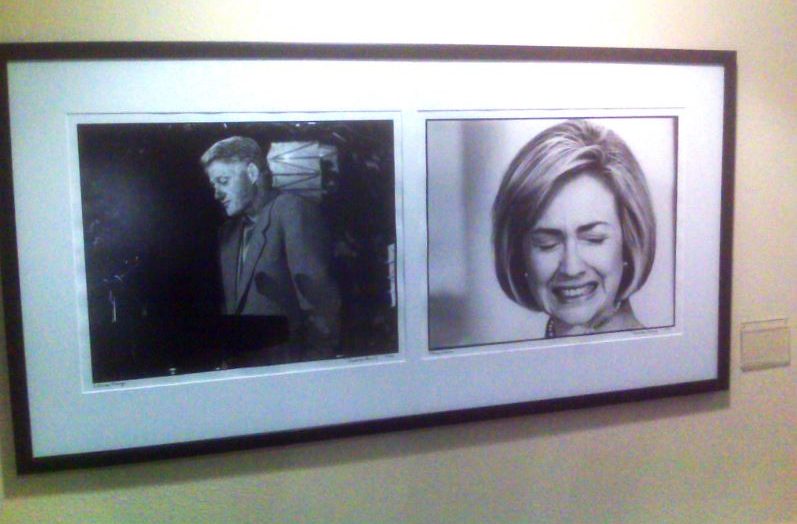 Bill and Hillary Clinton are on display on the seventh floor.

All there’s missing is a picture of Jeffrey Epstein playing mini-golf.

Finally, as if to sum everything up, this is what’s on display above the restaurant.

The head of a goat above the hotel restaurant.

While the art pieces on display at Hotel Lucia are rather cryptic and enigmatic, there appears to be a common theme uniting them. And it revolves around children, abuse and the world elite. The several depictions of restraint, bondage, and suffering, coupled with pictures of celebrities and politicians appear to send a specific message to visitors. Well, at least, to those “in the light”.

After all, the name Lucia comes from the Latin word Lux, which means “light”. And who is the favorite figure of the occult elite? Lucifer … aka the “light-bearer”.

FacebookTwitterSubscribe
Related Topics:featuredhotelsSinister Sites
Up Next