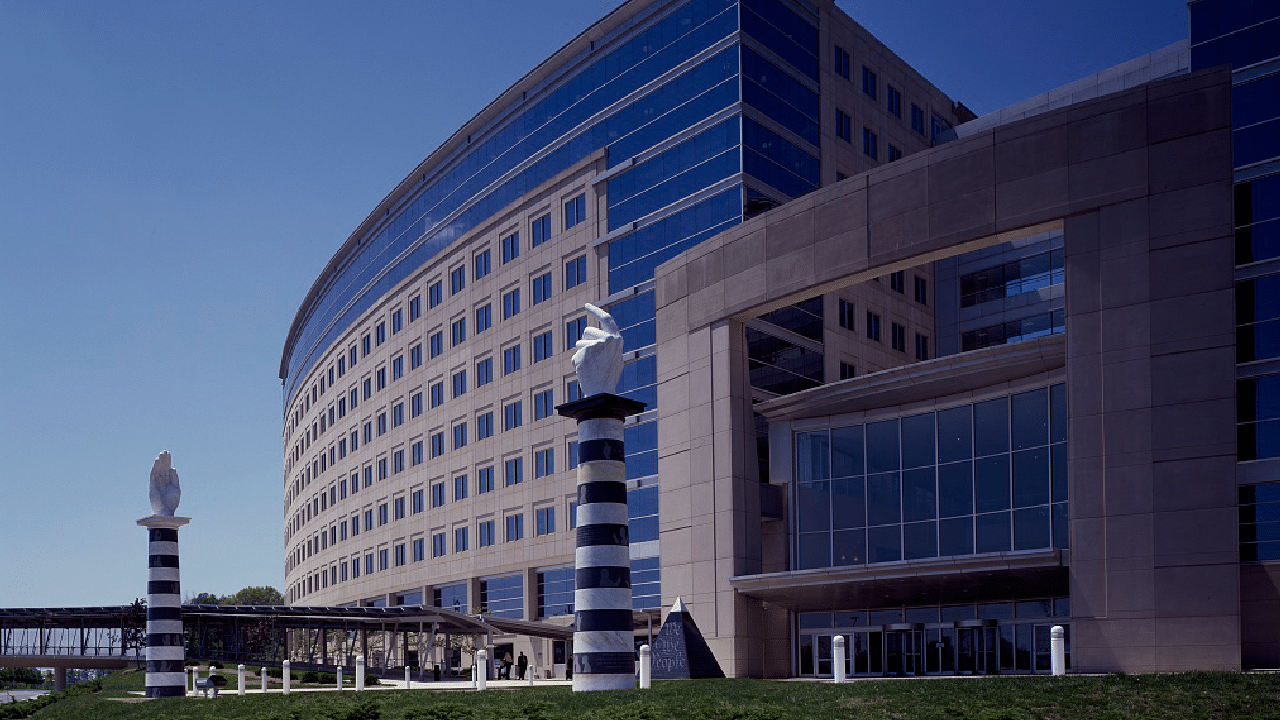 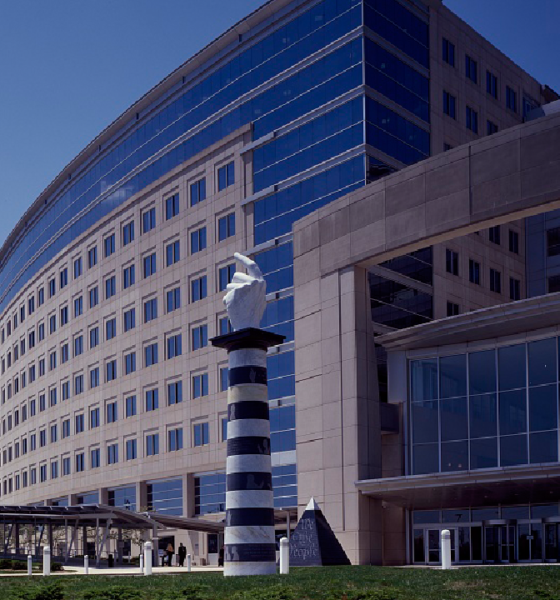 The IRS headquarters in New Carrollton, Maryland is a government building that, despite being constructed with public funds, contains art referring to elite secret societies. More importantly, the art conveys a strange message about the U.S. Constitution and the American people in general. We’ll look at the symbolic meaning of the art found in front of the IRS headquarters in Maryland.

The IRS was originally created as a “temporary measure” during wartime but there is nothing temporary about it now. The gigantic IRS complex in New Carrollton, Maryland was built in 1997 and is still growing today, indicating that this institution is indeed here to stay. This modern building has all of the state-of-the-art amenities one can think of, but it is the odd public art in front of it that is the most noteworthy. While these sculptures might be merely “decorative” to most people, they conceal a meaning that is infinitely profound to those who are versed in occultism. In fact, fully understanding the origins and the meaning of the symbols in front of the IRS building means understanding who is truly in power in America (and around the world). It also provides the key to understanding what they believe in and how they perceive the masses.

The IRS is not known to be a very artistic institution and there is not much art present at its headquarters in Maryland. However, the few pieces that are on display manage to convey everything that needs to be known about those who built the complex.

The entrance to the IRS headquarters is guarded by two black and white pillars made of the highest quality marble, topped with white hands. Between the two pillars is a dark pyramid with a metallic capstone on which is written “We the People”. 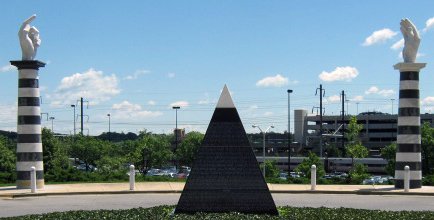 The art in front of the IRS Headquarters features a pyramid with a capstone between two pillars. The black and white stripes refer to the Hermetic concept of duality.

What does all of this represent? Here’s an “official” description:

“The most striking elements are the huge, white marble hands atop each column. Each hand points skyward, one with the forefinger extended; the other is an open hand, the fingers ever so slightly cupped.

The 1997 work is called “Vox Populi,” which is Latin for “the voice of the people.” The hand with the raised index finger represents deliberation, argument, the gesticulation of a speaker giving his or her opinion. The hand with an open palm represents the act of voting or taking an oath.”
– The Washington Post, “The Big Hands of the Law”

That is all well and good, but what does “Vox Populi” have to do with the IRS? Can citizens weigh in or vote on anything about the IRS? Why are the pillars black and white? Why is there a pyramid with a capstone in the middle? As it is the case for most occult symbols, there’s as basic (and unsatisfactory) interpretation given to the masses and a “real” meaning for those in the know. For those in the know, the art is a nod to the highest degrees of Freemasonry. 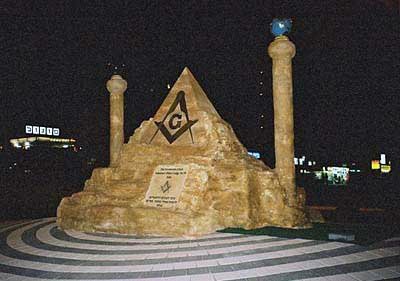 This Masonic monument in Israel contains exactly the same elements: A pyramid with a capstone between two pillars. The stripes on the ground represent duality.

Let’s look at each element of this (not so) public art.

The symbolism of the twin pillars is ancient and profound. It refers to the core of hermetism which is the basis of secret society teachings. The pillars represent duality and the union of opposites. In Freemasonry, the twin pillars are called Jachin and Boaz.

” These two pillars respectively connote also the active and the passive expressions of Divine Energy, the sun and the moon, sulphur and salt, good and bad, light and darkness. Between them is the door leading into the House of God, and standing thus at the gates of Sanctuary they are a reminder that Jehovah is both an androgynous and an anthropomorphic deity.”
– Manly P. Hall, The Secret Teachings of All Ages 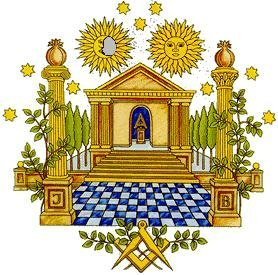 While not all pillars are necessarily Masonic, those in front of the IRS building contain other features that leave no doubt regarding their secret society connection. 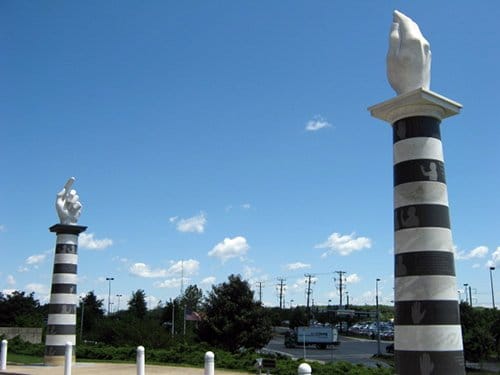 Sharply contrasting with the rest of the building, the pillars are stripped in black and white, a pattern evoking duality. This concept visually represented on the Masonic mosaic pavement. 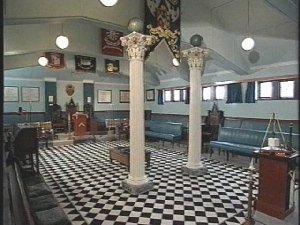 The black and white checkerboard floor is probably the most important feature in Masonic lodges.

To make things even more explicitly Masonic (for those in the know) each pillar is comprised of exactly 13 stripes, a number that is of the utmost importance in Masonic lore. Considering the constant attention to occult numerology in Masonic art, this fact alone should be very telling.

Above each pillar are white marble hands. It is interesting to note that formal Masonic attire requires white gloves. One of the hands points upwards, towards the sky. While the official meaning claims that it refers to the act of public discussion, this hand sign, placed in the esoteric context of the artwork, takes on a much more ancient and mystical meaning.

Named the “hand to god”, the “sign of Preservation” or the “hand of the Mysteries”, the sign of the hand pointing upwards can be found in many works of art that bear an esoteric meaning. It is nearly always associated with figures that are seen to possess “knowledge from the gods”. 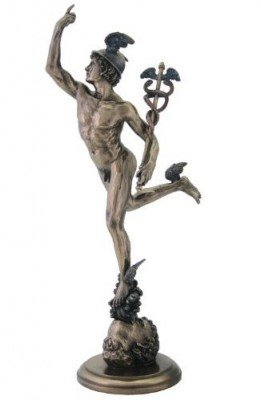 The classic depiction of Hermes always depicts him pointing towards the heavens. Known as the “messenger of God”, Hermes is a central figure in Masonic lore. He is considered to be the teacher of theurgic sciences, therefore helping humanity ascend towards godhood (the word Hermetism derives from Hermes). 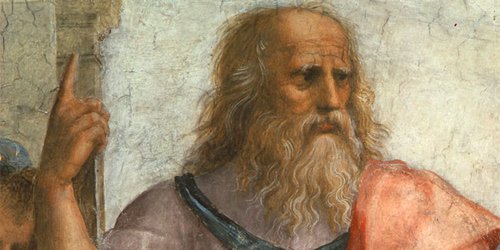 “Plato, an initiate of one of these sacred orders, was severely criticized because in his writings he revealed to the public many of the secret philosophic principles of the Mysteries.” – Manly P. Hall. In this classic depiction of Plato by Raphael, he is pointing upwards. 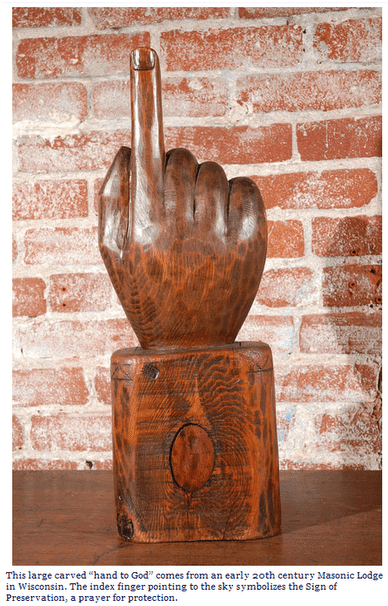 This Masonic item for sale features the same hand sign as found in front of the IRS building.

In the context of esoteric teachings, a human pointing towards God represents the ultimate goal of the Mysteries: Ascending from the state of a mere mortal to achieve godhood.

The hand above the other pillar does not point towards the sky but is rather opened. While pointing towards somewhere means moving in that direction, an opened palm is traditionally associated with “stop” or “halt”.  In Masonic symbolism, the twin pillars are often topped with contrasting symbols (the sun and the moon or globes representing earth and heavens). Could the white hands above the pillars represent the same opposite notions of godhood (pointing towards god) and earthly materiality (halt sign)?

On these Masonic pillars are etched various quotes regarding the U.S. Constitution and the Bill of Rights. Some of them are quite odd in such this one by Barbara Jordan: 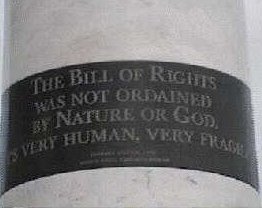 “The Bill of Rights was not ordained by Nature or God.”

Considering the fact that a bunch of laws blatantly violating the Bill of Rights (notably the First and Fourth Amendment) were enacted shortly after this building was erected, one can ask if this quote wasn’t some kind of a warning. As we see new police-state-style laws violating privacy, free speech and encouraging oppression, we can definitely conclude that the elite views the Bill of Rights as something “very human, very fragile” that can easily be violated. While the above quote can be interpreted as a reminder to not take the Bill of Rights for granted, in the context of its location, it conveys an unsettling message about how it can easily be tampered with. 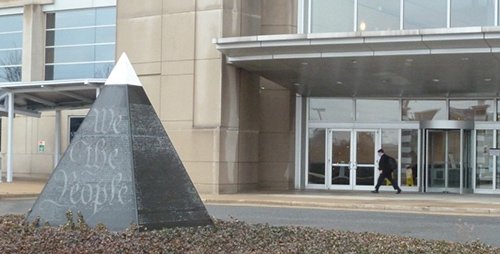 Between the two pillars is the most recognizable symbol representing the occult elite: A pyramid with a shiny capstone. On the pyramid is written the US Constitution, which famously starts with “We the People”. A close look at the sculpture leads to several questions.

First, why is the U.S. Constitution etched on a symbol that is associated with occult secret societies whose highest degrees are restricted to “elite men”? Isn’t there a contradiction here? Second, in occult elite symbolism, the base of the pyramid represents the masses, while the capstone represents the “illuminated”. Conveniently enough, the words “We the People” is written on the charcoal-colored based. Does the capstone (which is placed above the pyramid and the U.S. Constitution) mean that the elite is above the law?

Far from being decorative, the art in front of the IRS building in Maryland describes the true source of power behind the American government, its spiritual and political philosophy, and its perception of the masses.

While the IRS doesn’t shy away from collecting money from every single American worker in the United States, the occult symbolism in front of its headquarters is definitely not meant for every single American worker. It is meant to be understood by a very few “select” ones. The fact that a public building is adorned with symbols of an elite secret society is abhorrent.

Contrarily to the “official” meaning of the pointing hand, no citizen has a say on the policies of these institutions or even what they display in front of their building. It is rather those in the capstone who dictate what will happen to “We the People”. As the official IRS motto goes: Service plus Enforcement equals Compliance. Maybe the finger that is pointing upwards should be the middle one.

The Occult Symbolism of the Los Angeles Central Library