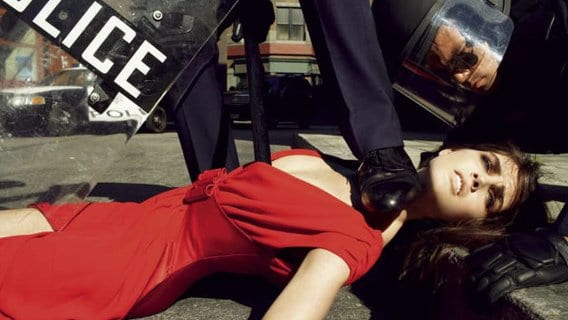 In this edition of Symbolic Pics of the Month: Police state fashion, pop stars with weird t-shirts and ads that make you go hmmm…(what you know about this C + C Music Factory reference??). 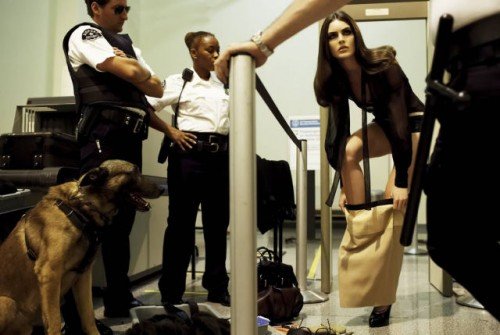 This photoshoot “named State of Emergency” by photographer Steven Meisel came out in 2006 (a few years before the creation of this site). It is featured here because it eerily foreshadowed police state tactics that appeared in the following years. And it makes it sexy. This pic apparently predicted the the sexually demeaning TSA searches and pat-downs that were instated around 2010. 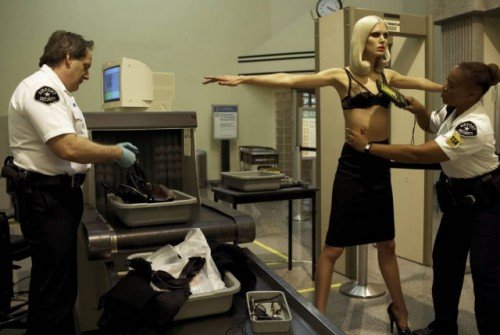 Another airport scene showing a mode forcibly undressed and searched at an airport check up. Again, many cases of TSA agents requesting people to undress and get patted down have appeared 3-4 years following this photoshoot. 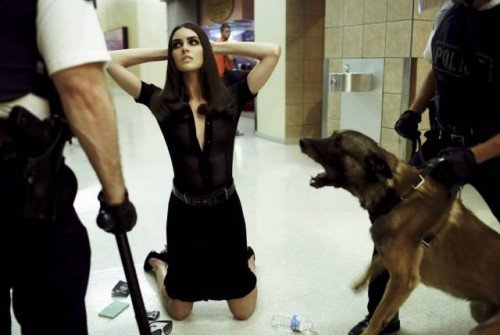 Allusions to police brutality at an airport, complete with batons and aggressive K9 unit…and look at that dress! 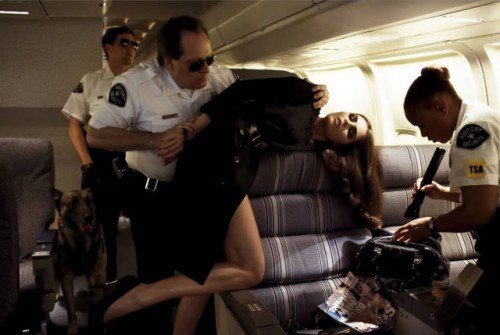 Agents with TSA badges violently apprehending a model. Is it foreshadowing the next step of “airport security”? 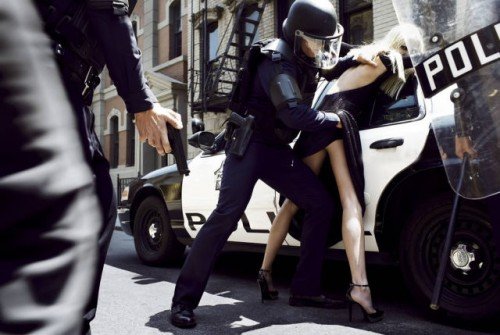 Other pics in the shoot take place in the streets, where fashion models are brutalized by police in riot gear. Its all about making police state sexy. 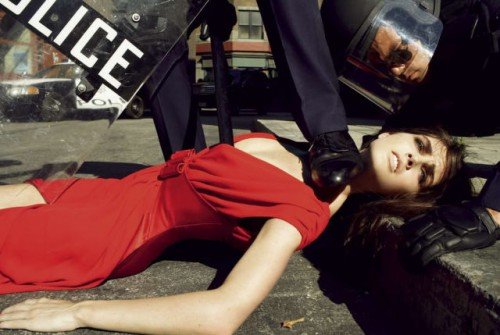 Model laying on the ground with police foot on her throat…Police brutality is not glamorous. 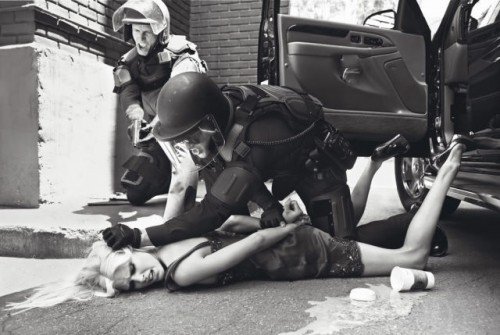 I know I ask this often but…Is this fashion? Really? 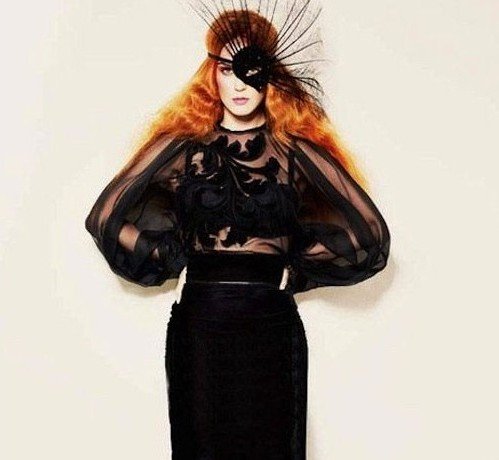 As usual, a lot of one-eye signs popped out in mass media in August. Here’s Katy Perry with a mask hiding one eye. 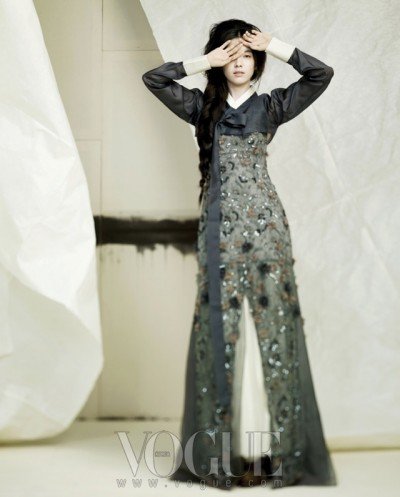 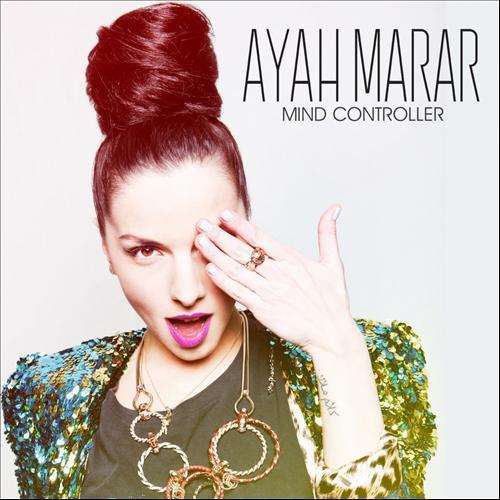 On this single cover, Ayah Marar is hiding one eye and the name of the song is “Mind Controller”…Can’t really add more to that. 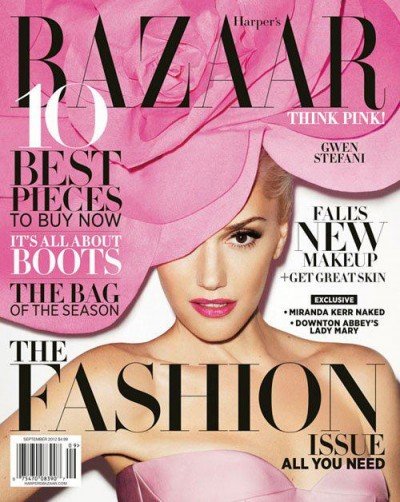 A gigantic hat hides one of Gwen Stefani’s eyes on the cover of Bazaar magazine. 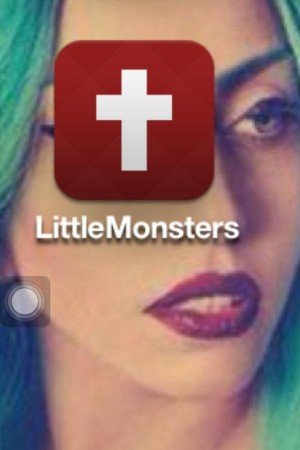 This ad for Lady Gaga’s Little Monster mobile app reminds us that Gaga still is an Illuminati puppet. 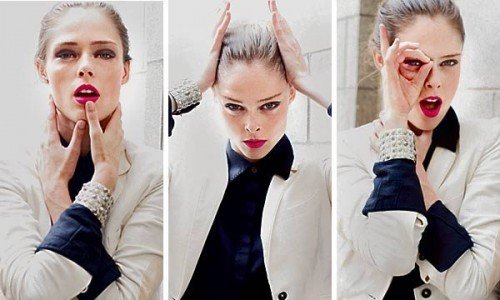 Model Coco Rocha doing the trifecta of Illuminati signs in the NY Times: Self-mutilation, devil horns and one eye. Name of the article? “Expanding Her Efforts to Be a Role Model” 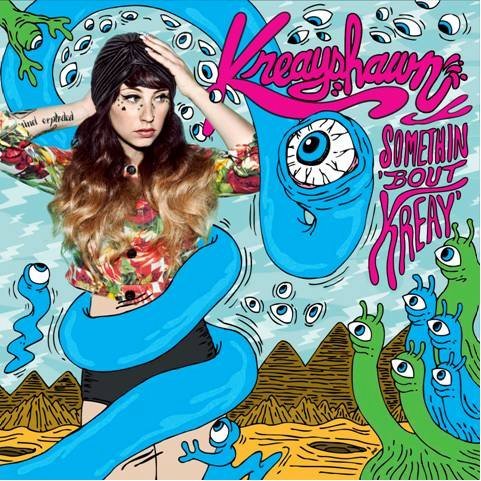 Kreyshawn’s album cover features a bunch of eyeballs and one-eyed creatures observing her. A giant one-eyed thing is wrapped around her…is she under its control? Also, there are pyramids in the background, making this thing a big Illuminati tribute. 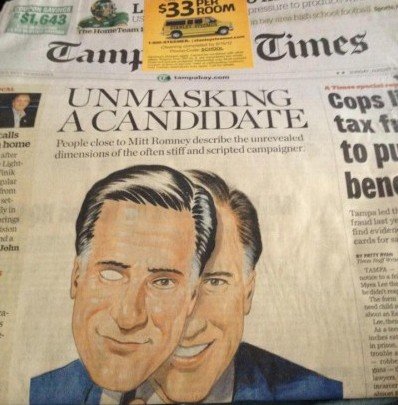 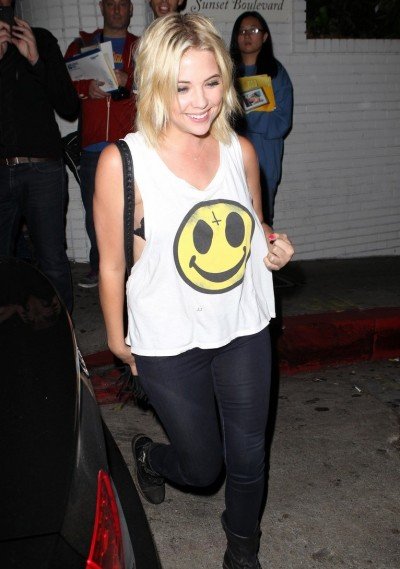 Ashley Benson is known for being an actress and for wearing shirts with inverted crosses on them. 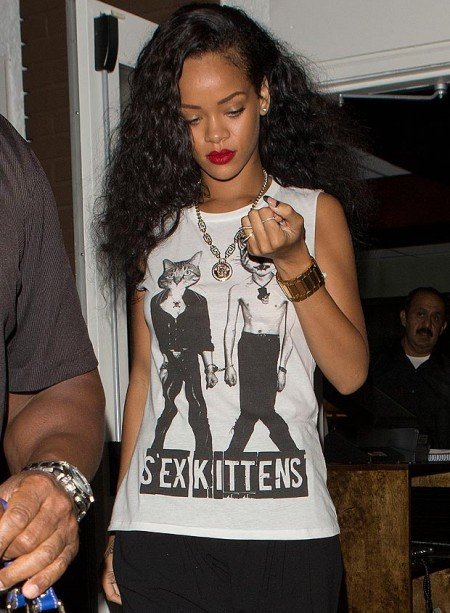 In last month’s Symbolic Pics, we saw Rihanna wearing a shirt saying “Control Minds” in the shape of an inverted cross. This month, we have Rihanna walking around with a shirt saying “Sex Kittens” – which is, as we know, a type of Monarch programming. The shackled figures convey the concept of mind control. 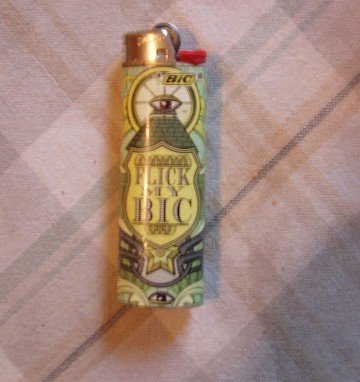 Illuminate your cigarette with this Illuminati lighter. 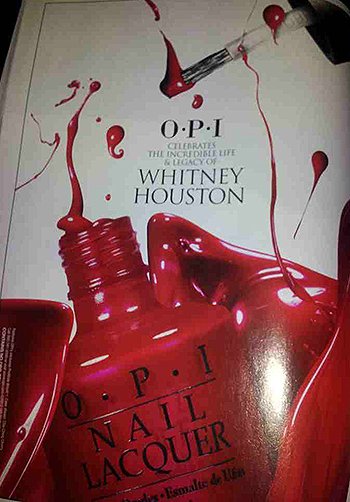 This ad for OPI nail lacquer “celebrates the incredible life & legacy of Whitney Houston”. If that’s the case, why does this thing appear to be splashing blood everywhere? Is it subtly celebrating Houston’s sacrifice? Let’s look at other ads by this same makeup company.

I guess we know who they’re rolling with…

This graph made by MTV shows the world’s richest rock stars. Notice how a bolt of lightning emerges from pyramid of artists to another pyramid with an all-seeing eye at the bottom. Is the image hinting at who or what made these artists as rich as they are?