This is the new album cover of rapper Playboy Carti. The minimalist design draws focus on two important elements: Blood and an inverted cross. In short: He’s yet another rapper who is defined by overt satanic symbolism.

When I write “defined”, I am not kidding. Satanic symbolism is what defines him. This is the main promo pic of Playboy Carti found across media. Literal devil horns.

Azealia Banks is yet another rapper that is all about satanic stuff. Shortly after digging up her dead cat and cooking it for witchcraft purposes, Banks proudly revealed during an interview that she owns the skull of a six-year-old girl who died from head trauma. Looking at this pic, I’m inclined to believe that Banks might also be suffering from head trauma.

To celebrate the fact that she’ll perform at the “Superbowl Tik Tok Tailgate” (whatever that is), Miley Cyrus posted this pic on Instagram. And that pic is pure MKULTRA Beta Kitten programming. A butt-naked Miley is surrounded by Monarch butterflies (monarch mind control) and chains (MK slavery).

In another pic, there’s barb wire and a crown of thorns (a reference to torture).

Speaking of Monarch symbolism, Dua Lipa was recently featured in Rolling Stone magazine. In this pic, for no specific reason, a butterfly is projected on her face. Actually, there’s a specific reason: It represents Monarch programming.

In this pic, a mirror is placed strategically to give the effect that Dua Lipa has two heads. A great way of representing MK alter personas.

In another pic from the same photoshoot, Dua Lipa performs a blatant one-eye sign, confirming that this is all about occult elite symbolism.

As usual, the one-eye sign was all over the place last month. And, as usual, Netflix used to promote its agenda-friendly content. This is the image used to promote Night Stalker, a documentary about satanic pedophile serial killer Richard Ramirez.

Hailey Bieber posted this picture doing a blatant one-eye sign on Instagram. She and her husband (Justin) are owned by the elite.

Maluma does a blatant one-eye sign in ELLE magazine.

Lizzo was recently featured in s Rolling Stones photoshoot by elite-favorite photographer Dave Lachapelle. In this picture, Lizzo looks like some type of goddess surrounded by headless mannequins (the people who revere her because of WHAT she is instead of WHO she is?).

This is a tweet by the NEJM (New England Journal of Medicine). It is requesting the removal of sex designations from birth certificates because they offer “no clinical utility” while being “harmful for intersex and transgender people). Yes, a “scientific journal” actually said that identifying the sex of a person (which is probably the most important piece of information on a birth certificate) is useless. Once again, the aggressive gender-blurring agenda is attacking science and destroying it. 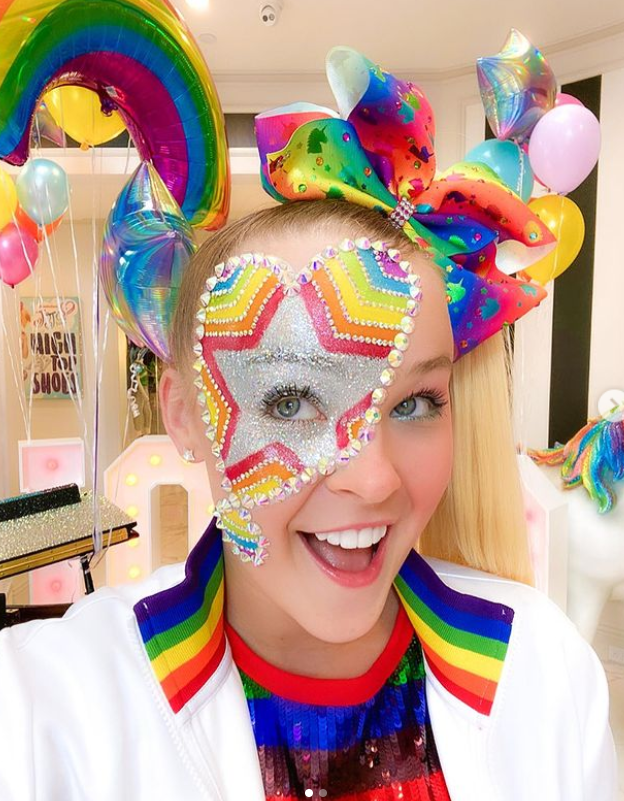 Ever since she appeared in Dance Moms, Jojo Siwa became extremely popular with children. In fact, she was recently included on Time’s 2020 annual list of the 100 most influential people in the world. Probably for this reason, she often turns herself into walking one-eye sign using makeup and accessories. Siwa also recently came out a “member of the LGBTQ+ community”. However, she did not label her sexuality because she “doesn’t really know this answer”. In that case, why is any of this being discussed and promoted to children? Answer: Agenda.

In order to milk her popularity with children, Siwa released a board game called “Jojo’s Juice”. It contains Truth-or-Dare cards with some questions that are extremely questionable such as this one: “Have you ever gone outside without underwear?” Who would even think of asking that to a child?

This one asks: “Have you ever walked in on someone naked or had someone walk in on you?” What?

This is a screenshot from a new Danish TV series for children named Dillermand. It is about a man who has a very long penis. Yes, a children’s TV show focuses on the genitals of a grown man. Here, he “elongates” his member in front of children. They’re desensitizing children to adult sexuality.

On New Year’s Eve, New York City mayor Bill De Blasio was criticized for dancing with his wife in an empty Times Square after “turning the city into a wasteland”. While that is a valid criticism, can we focus on the mask worn by De Blasio’wife? Because it features a very specific symbol that is loved by the occult elite.