Trippie Redd is part of a new generation of artists that some affectionately call “mumble rappers”. They’re young, they have colorful hair, they have tattoos all over their faces and they love to rap about “poppin’ pills”. Also, many of these young rappers are deeply into satanism and occult rituals. In my articles about the music videos of Lil Uzi Vert and Young Thug, I explained how Satanic symbolism has become perversive in modern urban music.

Trippie Redd is in perfection continuation of this trend. While crazy hair and face tattoos scream out “I’m an eccentric and an individualist”, the symbolism surrounding his act follows the elite’s agenda to a T. Indeed, everything about him fits right in the specific pattern of symbols I’ve highlighted on Vigilant Citizen for years.

Trippie Redd tattooed TR666 on his sand with a big all-seeing eye.

Of course, many fans interpreted TR666 as meaning “Trippie Redd 666” which seems to imply that Trippie Redd is a Satanist. However, not unlike other artists who display blatant satanic symbolism, Redd denies being into Satanism. In a (now deleted) Instagram post, Redd explained that 666 was not about the devil:

[They] be telling you “666” is the mark of the beast, explaining it’s a dark entity with wooly hair, and all this other s**t… N**ga, that’s black people! Six protons, six neutrons, six electrons, N**GA! Do your research. Don’t try to knock a black successful man and say I’m satanic or illuminati. I be trolling, you know what I’m saying? But this is not no troll, this is black power s**t.

In short, he’s trying to say that 666 is actually about “Black Power”. No, it’s not. There is a reason why the slogan of this site is “Symbols rule the world, not words nor laws”: Words can be twisted to mean anything, but symbols do not lie. Here are some pictures of Trippie. The symbolism surrounding him do not lie.

Above the inverted crosses is a  tattoo saying “Demons At Play”.

Trippie himself looks like a demon on his social media profile pic.

His shirt says: “Take me to hell, tell me its heaven”, as a woman hugs the devil.

The cover of his album “Life is Trip” is basically a compilation of Illuminati mind control symbolism.

The obligatory “one eye hidden” pic which confirms that Trippie Redd is submitted to the occult elite.

If you need more confirmation of the Satanic agenda behind Trippie, the lead single from his debut album provides it. Big time.

Trippie Redd’s song Topanga samples the 2006 gospel song It Ain’t Over by Maurette Brown Clark. The original gospel song has a heavy “Lord praising” vibe as the chorus goes like this:

In Trippie Redd’s version, the words “It ain’t over” are sampled as he sings the following:

Don’t talk to strangers
Since a youngin’ I’ve been totin’ bangers
I might take that lil’ b—tch to Topanga
I said, “Stop, little b—tch, you in danger”

The song is basically about Trippie bring a “lil b—tch” to his hometown and him shooting guns.

As it is often the case in the entertainment industry, the music video takes things to another, Satanic level. Directed by fashion photographer Kenneth Cappello, the video is an all-out Black Mass ritual.

This is a picture posted on Kenneth Capello’s Instagram account: An eye hidden +  devil horns: Everything you need to understand the true meaning of the video.

As we hear the song’s gospel-infused beat,  we see Redd flanked by two horned skulls. He wears a robe and holds two snakes. Things are about to get very satanic.

In the spiritual context of the video, snakes can represent Satan taking the form of a serpent in the Book of Eden.

Then, the video turns into an all-out ritual.

This scene sums up the entire video. The pentagram surrounded by candles indicates that ceremonial magic is taking place.

A typical witchcraft magical circle using a pentacle and candles.

In another scene, we see the result of Redd’s magical dealings.

References to magical levitation can be found throughout history and cultures. In some cases, it is associated with divine power and, in others, the result of demonic activity. 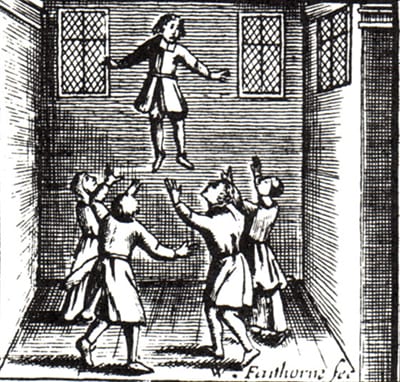 An illustration from the 1681 book Saducismus Triumphatus depicting a child levitating due to witchcraft.

In some religions, magical levitation (through sorcery) is interpreted as an affront to God.

“Levitation by magic was depicted in Jewish texts to be practiced by Balaam who lived at the time of Moses. Magic involves directly ordering the spirits to carry out tasks thereby ignoring God. Instead of submission to God, self pride and ego of the individual is used to order the spirits to carry out tasks such as levitation.”
– Summers Montague, Witchcraft and Black Magic

This concept is famously exemplified in the story of Simon Magus – the sorcerer credited to be the founder of Gnosticism. To prove that he was a god to people in the Forum, Simon Magus began levitating. Then, the apostle Peter prays to God to stop his flying, and he stops mid-air and falls into a place called “the Sacra Via” (meaning “Holy Way” in Latin), breaking his legs “in three parts”.

In short, the act of levitating through magic symbolically represents the ultimate goal of occultism: Achieving godliness through one’s own means. Therefore, the fact that Trippie levitates in video carries heavy symbolic meaning.

Then, things are taken to another satanic level.

When the drugs kick in, the girls basically lose their minds and their soul.

This girl convulses violently while holding a snake. That’s a bad trip.

This girl has no pupils and a snake is chilling on her head. This clearly represents being possessed by evil.

Towards the end of the video, a Christian ritual is desecrated to turn the video into pure Satanic Black Mass.

In this scene, Redd wears a white veil as if he was a bride. He also wears a crown of candles.

The crown of candles is a direct reference to Saint Lucy Day as celebrated in Italia, Scandinavia and some parts of the United States.

Swedish girl as Saint Lucy wearing a crown of candles

Why would Trippie Redd dress as Saint Lucy? Because Black Masses are about desecrating Christian traditions and perverting their meaning.

A deeper look at the story of Saint Lucy gives this video a meaning that is even more disturbing.

Known as St. Lucia of Syracuse the woman was honored in the Middle Ages and remained a well-known saint in early modern England. According to legend she brought food and aid to Christians hiding in the catacombs using a candle-lit wreath to light her way and leave her hands free to carry as much food as possible.

In addition she helped her fellow Catholics hiding in the dark underground catacombs who were at risk of suffering persecution.

Saint Lucy was also well known for her beautiful eyes. It was said that her eyes radiated her love for Christ.

However, her mother who feared for Lucy’s future arranged a marriage to a young man of a wealthy pagan family. Lucy’s mother suffered from a bleeding disorder and her condition made Lucy deeply worried.

One night, while dreaming, Lucy saw Saint Agatha who had been martyred fifty-two years during the Decian persecution. The saint told Lucy that because of her faith in God her mother would be cured and that Lucy would be the glory of Syracuse, as she was of Catania.

With her mother cured, Lucy took the opportunity to persuade her mother to allow her to distribute a great part of her riches among the poor.

When the Governor of Syracuse learned the jewelry had been given away to the poor he became furious. The governor sentenced her to forced prostitution, but when guards went to fetch her, they could not move her even when they hitched her to a team of oxen. The governor ordered her killed instead. After torture that included having her eyes torn out, she was surrounded by bundles of wood which were set afire; they went out. She prophesied against her persecutors, and was executed by being stabbed to death with a dagger. Her name is listed in the prayer “Nobis quoque peccatoribus” in the Canon of the Mass.

Legend says her eyesight was restored before her death. That was the reason she became the patron saint for people who are blind and suffer eye disorders.
– Ancient Pages, Why We Celebrate Saint Lucy’s Day

Saint Lucy by Domenico Beccafumi, 1521. Saint Lucy is traditionally depicted as holding her eyes on a golden cup or plate.

Considering the fact that Saint Lucy got her eyes torn out and became the patron saint of the blind, this scene from the Trippie Redd video takes on a more sinister meaning.

The video ends with a final act of desecration.

The wreath of candles that was on Redd’s head is thrown on the ground. No respect for Saint Lucy.

While Trippie Redd appears to be an eccentric individual, his act is 100% in line with the elite’s agenda which includes normalizing satanism through deceptive symbolism. Through obscure yet unmistakeable references, the videos is an actual satanic Black Mass, complete with invocations and the desecration of Christian symbols and rituals.

Of course, Trippie Redd wasn’t the mastermind behind this video. The visuals of Topanga were created by a fashion industry photographer who is fully aware of occult elite symbolism. Trippie, like many other young artists in his position, is a mere pawn in the grand scheme of things.

XXXtentacion, Trippie’s former associate was going through the same path. Indeed, X rapped about selling his soul to Baphomet and wore hats saying “Team Satan 666”. Oddly enough, X was killed 06/18/18, a date which can be kabbalistically translated to 6/6+6+6/6+6+6. Coincidence? Perhaps.

No matter what the case may be, as Trippie Redd enters deeper into the darker realms of the music industry, I’d like to dedicate a line from his own song to him:

“Stop that now, you in danger”