Justin Bieber’s “Where Are U Now” video features hundreds of images superimposed on the singer, all flashing at high speed. Unsurprisingly enough, there’s a whole lot of Illuminati symbolism.

Although this is my first full article on Justin Bieber, it is nevertheless quite obvious that he has been a major music industry pawn for years. Considering that he was discovered and marketed at a very young age, Bieber most likely went through the most horrific path to success, which includes being “introduced” to some of the biggest creeps in the industry and “initiated” through some kind of abusive and degrading ritual. He may have been even subjected to mind control.

As if he was chosen to play a specific role, Bieber’s career has revolved around an astonishingly long list of humiliating and embarrassing events ranging from strange, erratic behavior (not unlike other MK child stars, such as Britney Spears and Amanda Bynes) to brushes with law enforcement officials around the world.

Bieber is also the recipient of near-universal hate from music fans worldwide, a hate that keeps growing with each additional “douchey” thing he says and does. Through it all, Bieber does not appear to have any control over what is happening to him, as he is transported from one place to another while constantly displaying his “I’ve been severely abused, please stop” face.

For this reason, the overall concept of Bieber’s video Where Are U Now is perfectly fitting. By having random people draw whatever they want on Justin Bieber, the video reflects Bieber’s lack of control over his image, his message, and his entire raison-d’être. He is basically a blank canvas on which his handlers can paint anything they want – and he cannot say anything about it — even if it’s really insulting … even if it goes against his deepest beliefs. Welcome to the music business.

Where Are U Now

The visual contents of Where are U Now were gathered from an event held at the Jack Ü headquarters where fans customized frames from the music video with crayons and colored pastels. The final result is Justin Bieber moving as these images flash at about 30 frames per second. The only way to actually view these images is to pause the video at random times (which is how I managed to grab some screenshots). While many of these images are genuinely funny and creative, a specific set of symbols keep reappearing. And, coincidentally enough, it is the exact same set of symbols the occult elite keeps peppering throughout the music videos of other major pop stars. Also, many of these images basically insult Bieber. While this might show Bieber’s mature and vulnerable side, it mostly shows how he has no control over how he’s portrayed.

We don’t know much about the “real” Justin Bieber, but, throughout his career, he did insist on the fact that he’s a faithful Christian. Considering this fact, why are there SO MANY satanic inverted crosses in that video? I am not talking about a few odd ones, it is a clear pattern. Here are just some I managed to catch. 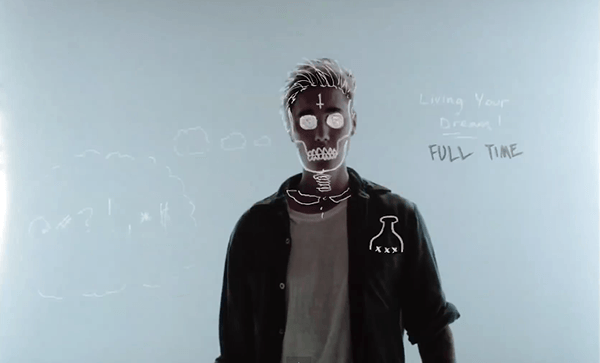 An inverted cross on his forehead. 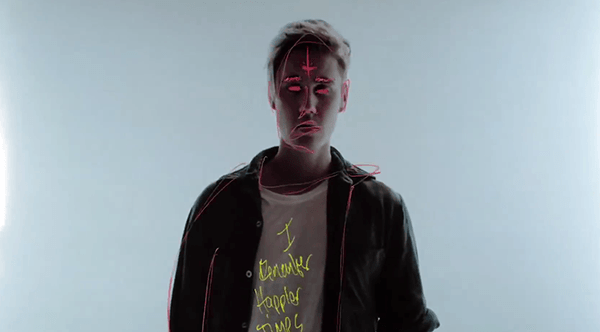 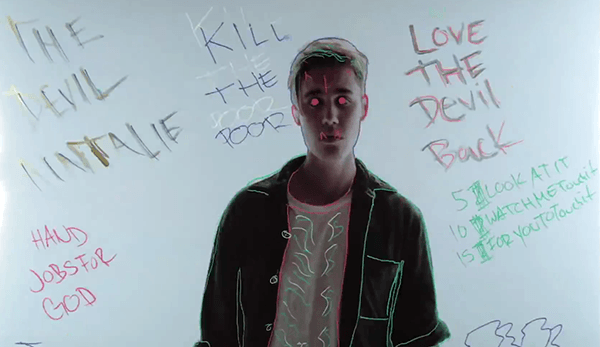 Yet another inverted cross + bonus messages such as : “Kill the Poor”, “Love the Devil Back” and other stuff I won’t type out. 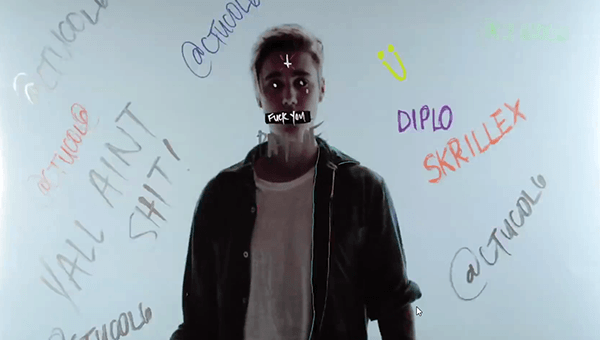 Another inverted cross on Bieber’s forehead. Our generation is so creative. 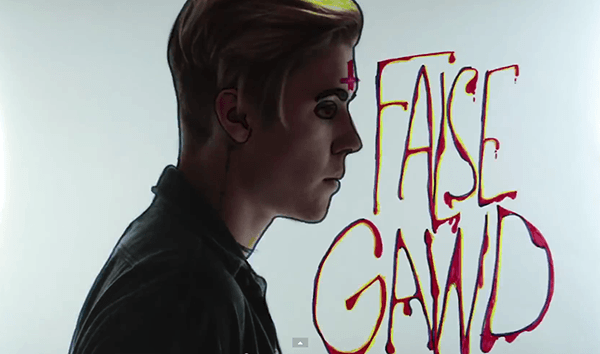 An another inverted cross on his forehead and the words “False Gawd”. 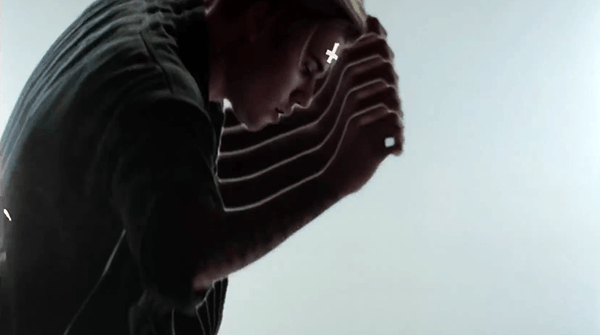 Can you see a pattern forming here? 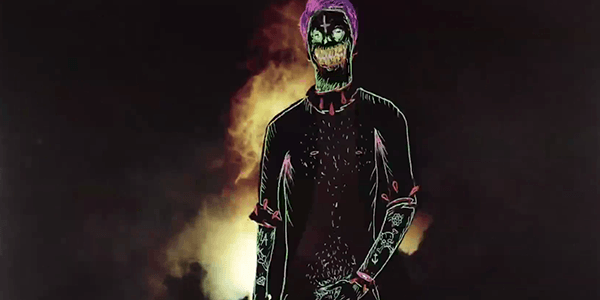 Another inverted cross plus a penis I censored to save the jobs of people at work.

An ironic “Jesus Saves” with Bieber portrayed as the devil with 666 on his chest. As a self-professed Christian, I am not sure Bieber approved of that slide. But he, unfortunately, has no power over whatever is projected on him.

In addition to the many satanic images, classic Illuminati imagery appears throughout the video. The pyramid and the all-seeing eye make numerous appearances. 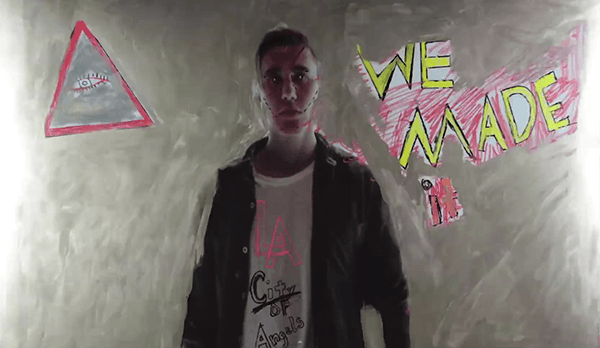 The All-Seeing Eye inside a triangle with the words “We Made It”. Yup, Bieber “made it” thanks to “Them”. 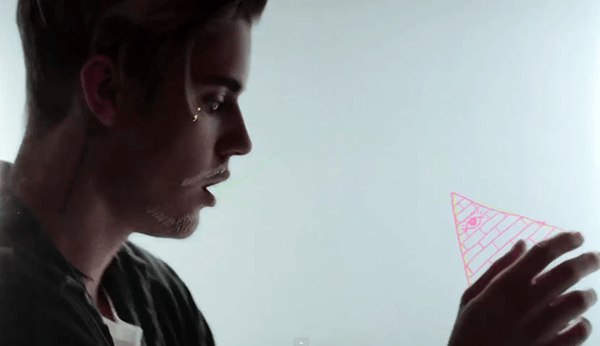 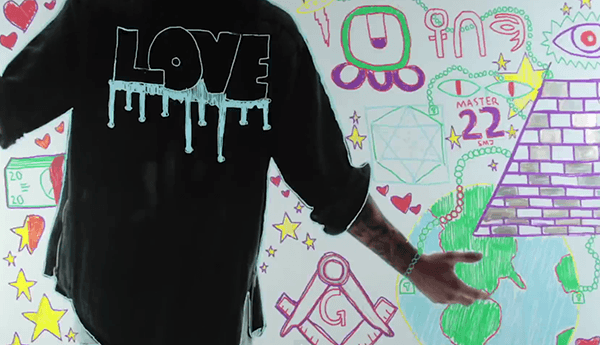 Here we see an Illuminati pyramid and a bunch of other Masonic symbols, such as the square and compass and the hexagram. 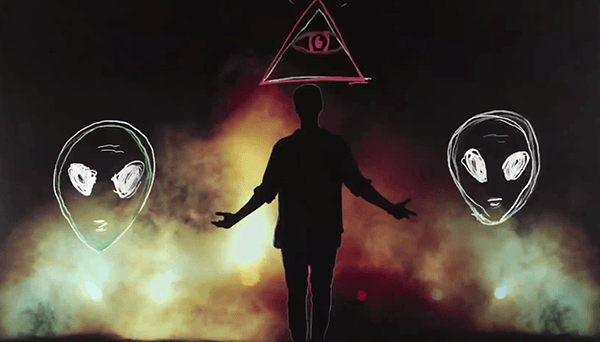 More of the same symbol + aliens. 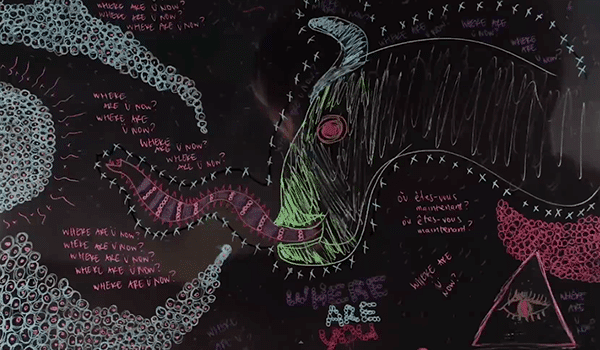 Bieber is turned into a horned monster with the Illuminati symbol at the bottom right. 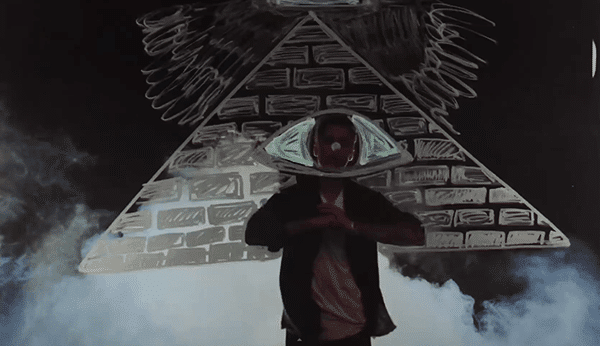 Bieber’s face is the pupil of a big Illuminati pyramid.

All of these images flash throughout the video at such a great speed they are basically subliminal unless one pauses the video at random places to admire these great works of art.

Another pattern: Ridiculing Bieber in his own video. 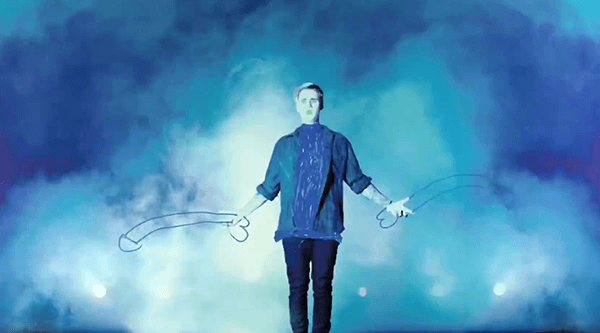 Bieber turned into a Miley Cyrus look-a-like doing what he probably had to do to make it big in the industry. I’m sorry if that was harsh, but people still do not understand how Hollywood is chock full of child lovers.

During the video we see Bieber looking very sad and vulnerable, as paint drips from his forehead – not unlike Jesus bleeding from his crown of thorns. 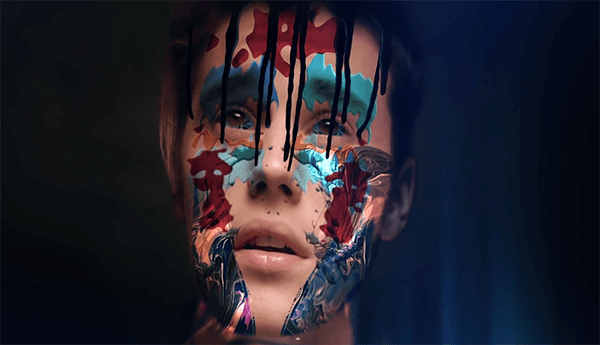 Bieber is the whipping boy of the music industry. That’s how his handlers want him to be. 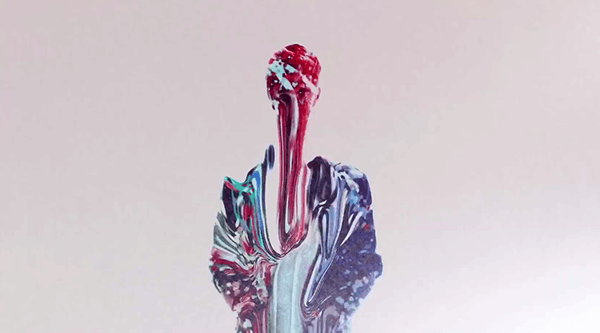 The video ends in a somewhat fitting way: Bieber turns into a big blob of paint and vanishes away.

As you can see, there is no intricate storyline in the video, just a bunch of images flashing on Justin Bieber. While these images were apparently drawn by random people, some symbols and messages keep reappearing and, coincidentally enough, they perfectly fit the overarching Agenda of the occult elite.

Some might say, “you are analyzing crappy drawings made by some dude wearing square glasses and a backpack”. Yes. Maybe those who made these drawings were being trollish or ironic. Maybe they did it because drawing occult symbols is cool and trendy right now. Maybe some know about the Illuminati industry and tried to communicate a message about Bieber being a pawn. Maybe today’s generation has been so brainwashed by Illuminati videos that they cannot think of anything else to draw. Or maybe some of these images were added by the video makers themselves to preserve a healthy quota of required Illuminati symbolism.

Whatever the case may be, the ultimate outcome is the same: Where Are U Now is yet another music video with millions of views that flashes Illuminati symbolism directly into the minds of the youth. You can rationalize it any way you want, but in the end, that’s what happened.

Related Topics:justin bieber
Up Next