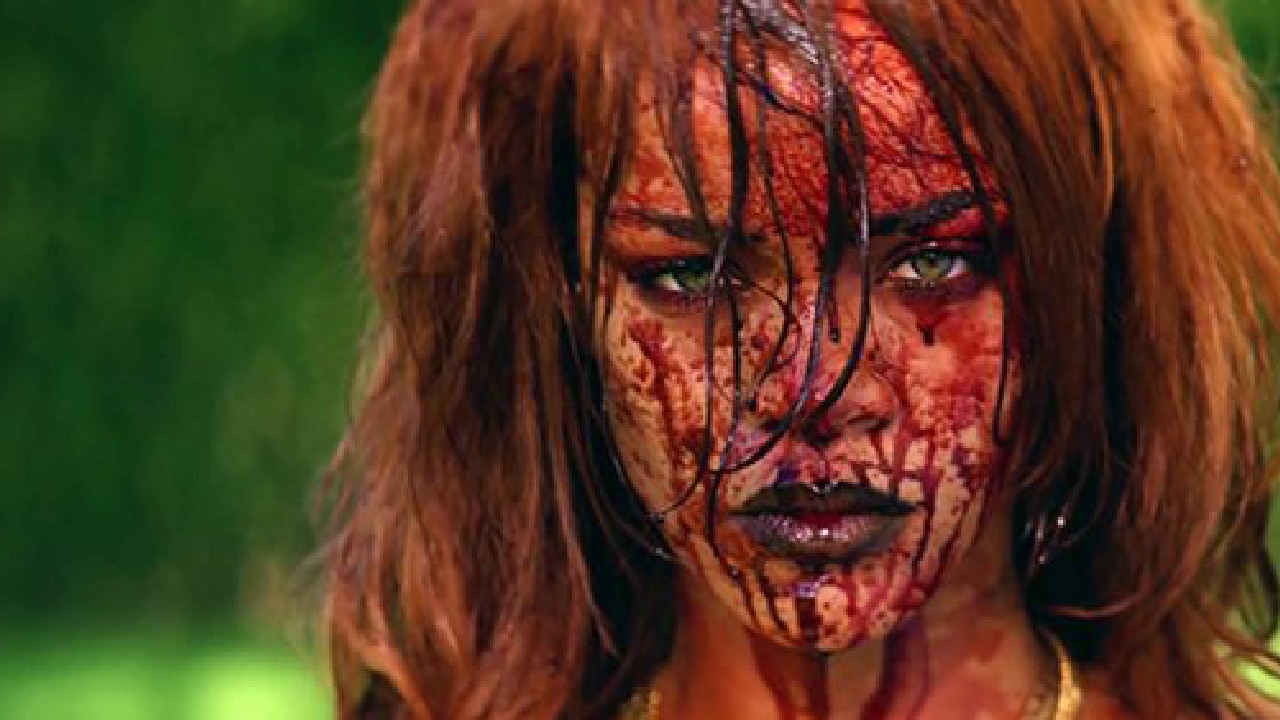 Since the launch of Vigilant Citizen in 2008, Rihanna has been a part of the picture. In fact, one of the first articles I ever wrote was about Rihanna’s Umbrella, and nothing has really changed since then. More than 7 years later, Rihanna is still being used to push the occult elite’s agenda … because that’s what industry pawns do. With Better Have my Money, Rihanna truly confirms that popular culture has turned into a depraved, toxic wasteland that purposely exposes young minds to death, murder, and torture. But it is not simply about exposing the youth to these things, it is about glorifying them, making them cool, fashionable, desirable and trendy.

Considering that the occult elite is not ashamed of torturing people for all kinds of purposes (see the horrific revelations of the CIA torture report  and the entire MK Ultra system), it is not surprising that they are looking to sell their love of human misery to the youth. One might say “This has nothing to do with Rihanna, it is just a fun video”. But actually, yes, it does. In Better Have My Money, Rihanna re-enacts actual torture techniques used by psychopathic entities and makes them appear cool. I mean, when you torture people on a yacht while there’s party music in the background, it’s cool, right? Right? Torture is cool? Oh, and sexy, too.

It’s Not Really About Her Money

If you listen to Better Have My Money without being exposed to the video, it is easy to assume that the song is about someone owing Rihanna money that she wants back. If someone has ever owed you money and tried to weasel their way out of paying you back, you probably relate to the catchy chorus of the song: “B*tch better have my money”.

However, the imagery of the video takes things to a disturbing, psychopathic, sadistic new level. Now it is not simply about Rihanna trying to get her money, it is about Rihanna enjoying torturing and killing people. But, because it’s Rihanna that’s doing it, we’ll rationalize the horrors on screen and say that it’s just her being a “strong, empowered, independent woman”, right? Well, guess what. Even if a woman does it, killing and torturing people is still wrong.

Does watching the video gives you an uneasy, unpleasant feeling in your gut? That’s your instincts subtly telling you that what you are watching is not right. It does not fit with the state of natural balance and harmony your mind attempts to stay in. Watching pain, suffering, dehumanization, and death is not “art”, it simply kills the soul.

As it is often the case with mass media, Rihanna’s video synchronizes with a recently released video from another pop star who also took on a bloody, vengeful, and violent persona: Taylor Swift.

Released a few weeks apart, Bad Blood and Better Have My Money feature pop stars in celebrating death and violence while wearing red hair – the color of blood and sacrifice.

The Better Have My Money video begins with a stereotypical Hollywood wife crossing paths with Rihanna and her mysterious trunk. 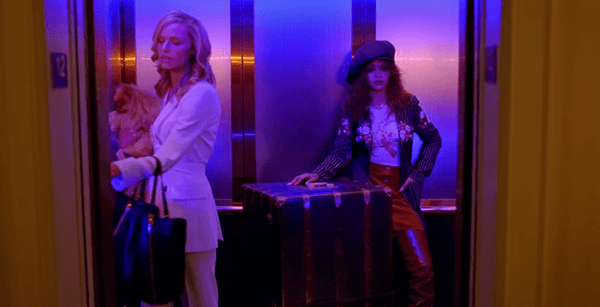 Rihanna is about to turn into a psychopathic torturer. But I looove her bohemian-chic style, so it’s OK.

Rihanna leaves the elevator with the woman inside the trunk and the ordeal begins. Rihanna and her friends do not simply kidnap the woman to get their money back – they take pleasure in torturing her in various ways. In short, they are partaking in the guilty pleasures of the occult elite: dehumanizing, torturing, traumatizing, and, ultimately, murdering people. Yes, that’s what the occult elite does. In real life. Read the news.

First, they strip their victim naked – a classic way of taking away the victim’s dignity and sense of security and to enter the realm of sexual abuse. 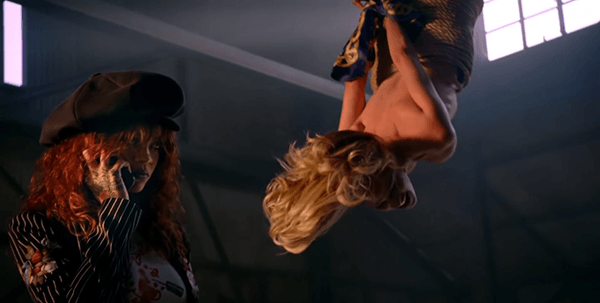 They hang her upside down while Rihanna looks really cool. Looove that hat BTW.

“Simply hanging a person upside down for one or two hours will begin to play tricks on the mind. The mind will begin to dissociate, and will begin to reverse the primordial brain functions such as pain is pleasure. The person’s mind rearranges. This is often done with Beta alters or Beta models to get them to think that the pain of sadistic rape is a pleasure. After this reversal in the mind that “PAIN IS LOVE”, the S&M kitten alters will beg their handler to slap them, tie them up, hurt them, etc. They will tease their handler, and tell him he is not a real man if he shows any mercy in how the pain is inflicted. Fire/burning torture is used in the porcelain face programming.”
– Fritz Springmeier, The Illuminati Formula to Create a Mind Control Slave

Rihanna and her friends appear to have gotten the CIA handbook of torture. 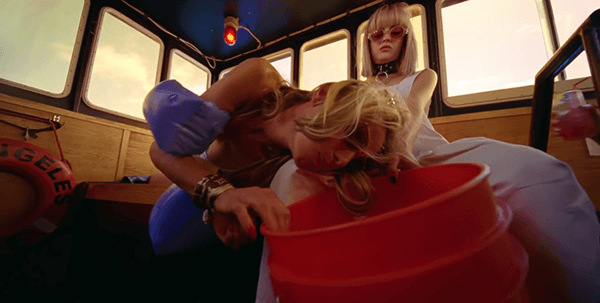 Inducing vomiting through motion and/or drugs.

Rihanna also appears to know about the sick mind games played on Beta Kitten slaves such as “making them pretty to then treat them like whores”. 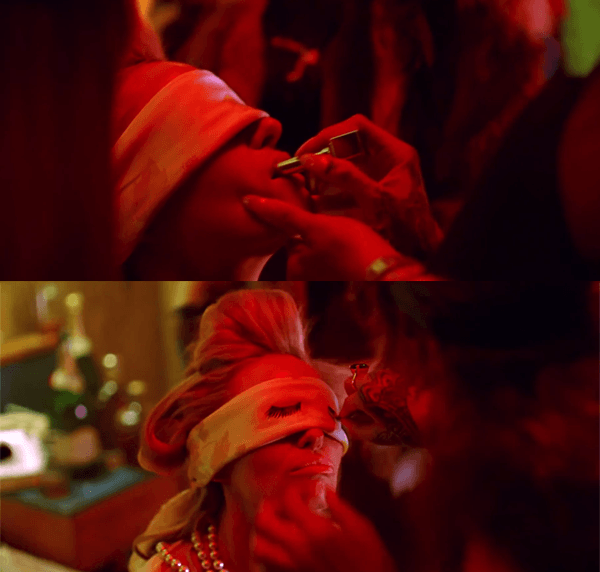 Rihanna and friends make the victim wear jewelry and makeup. They even add eye-lashes on her blindfold. She is then drugged. This is the kind of stuff MK handlers do to slaves before abuse. 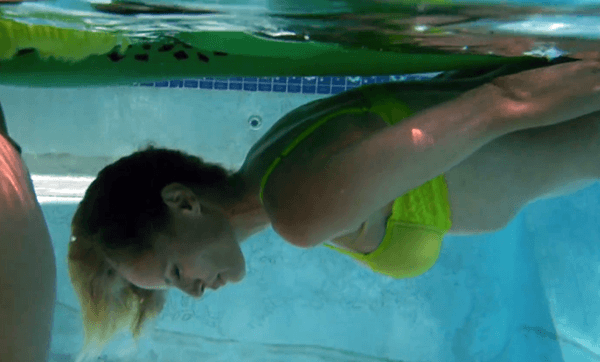 Keeping a victim underwater and simulating death by drowning is a particularly traumatic torture technique (see Guantanamo Bay/waterboarding) that often leads to dissociation.

In the scene above, the victim is kept underwater to hide her from the idiot policeman who is too distracted by the pretty women to notice anything else. When pop stars like Rihanna and Taylor use sex and violence to get what they want, it is often portrayed as a feminist statement. But in mass media, feminism is not about equality, it is about normalizing degradation and violence and calling it empowerment.

After a bunch of shots of Rihanna looking angry and cool, we finally learn why this poor woman is suffering. Because her husband owes Rihanna money. The woman is therefore presumably totally innocent but is still subjected to the worst kind of abuse. (By other women. So much for feminism!)

Despite his wife’s torture, the husband is not sending Rihanna her money, so she decides to slaughter him like a farm animal. That’s rational.

In a quick shot, we see his hand cut off.

Doing all of these horrific things was apparently worth it because Rihanna got her money. Good. We were all very worried about Rihanna’s money. While young viewers will conclude that “Rihanna is such a bad-ass”, the final scene of the video reveals her true state.

Rihanna lays in the trunk where the torture victim was previously placed.

Not unlike the torture victim, Rihanna is inside the chest, naked and drugged. It is a symbolic way of stating that Rihanna is actually not a cool, renegade bad-ass, but is a victim herself. She is a product of the Beta Kitten industry, she has literal blood on her hands, but there is some money thrown at her to keep her in line. In other words, she is no different than the woman who got kidnapped, tortured and exploited to get money. By portraying a sadistic killer over club music, she is being used and manipulated by the industry to advance its Agenda. She is not “empowered”, nor is she in control of anything. She never was.

The last image of the video, after the song is over, shows Rihanna’s face dripping with blood over unsettling sounds.

The blood on Rihanna’s face recalls the extreme violence of the murder she committed and reminds us of the real point of the video. This was never about getting paid. This is about using Rihanna to sell the elite’s culture of death and dehumanization while negating human dignity, self-respect, and everything that is positive about humanity.

There is no hidden message in Better Have My Money. Everything is in your face, like the blood dripping down Rihanna’s face. The video still manages to deceive viewers by rationalizing horror because “the guy was a jerk and he deserved it”. No, he didn’t.

However, the sickness goes deeper than this. This video is about the elite’s obsession with pain and torture. Whether you are looking at the treatment of war prisoners and MK slaves, or at the underground rings selling snuff torture, those “above the law” have legitimized the torture of those that are “beneath” them. Not only is it used as a tool to obtain what they want, but their inverted mindstate “gets off” on it. Better Have My Money celebrates this mindstate under the guise of being “edgy”.

What does this say about us and our culture? Why does “pushing the limits” in popular culture always go in a debasing and dehumanizing direction, but rarely in the opposite direction, toward beauty, creativity, and innovation? Because those who control the world economy and mass media do not want human minds to expand and be inspired. They want the opposite. They want closed, cloudy minds obsessed with unhealthy and destructive ideas and images. Minds they can control.

Rihanna is a tool to accomplish this. She doesn’t really have a say in any of it. She didn’t even write the song. She is simply doing what her bosses tell her to do. And, when all is said and done, they will tell her: “B*tch better have my money”.

Muse’s “The Handler” : A Song about a Mind Control Slave Singing to His Handler