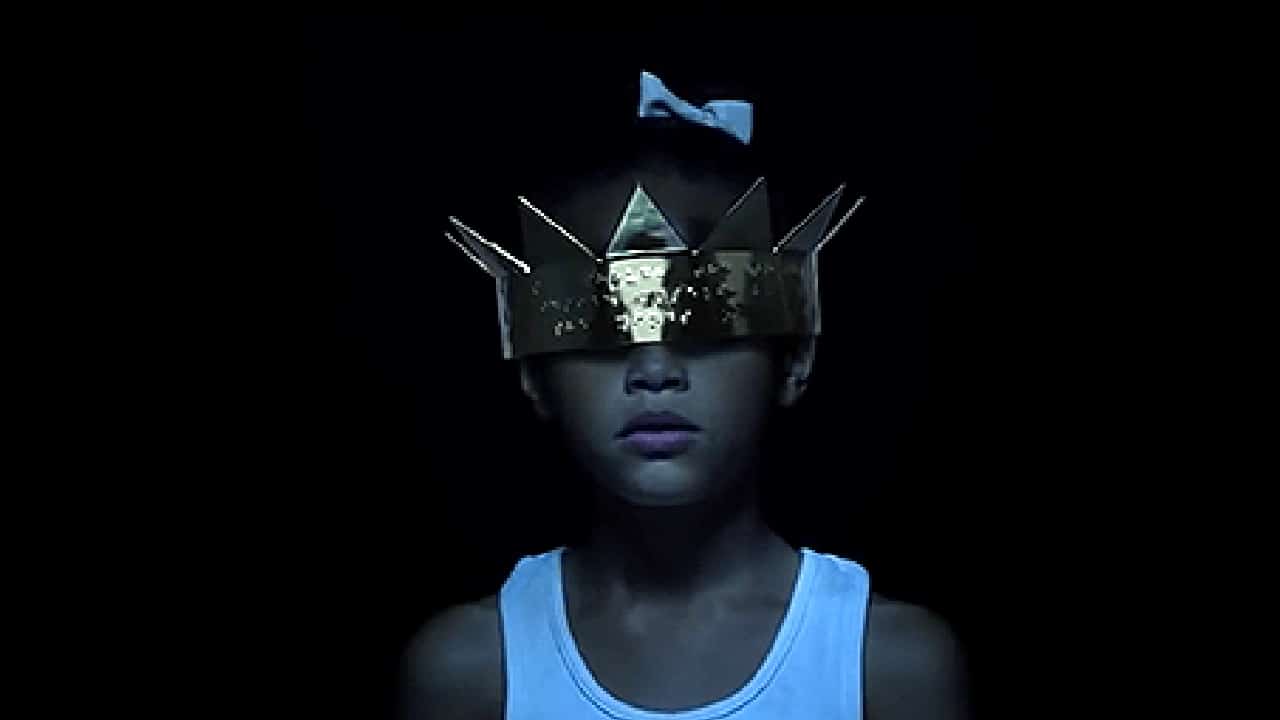 The eight short videos that preceded the release of Rhianna’s ANTIdiaRY album conceal a heavy message: They reveal the process required from an artist to enter the higher-ups of the music industry, which is ruled by an occult elite.

Rihanna was discovered by music industry people when she was a teenager in Barbados and, quickly enough, she was sucked into the dark hole that is the music industry. Her third album, titled Good Girl Gone Bad, launched her into super-stardom and made her a household name. Coincidentally enough, it is also with that album that Rihanna’s image and persona took a darker direction and her work became permeated with Illuminati symbolism. For instance, her video Umbrella (as analyzed in my 2008 article), symbolically represents her “selling her soul” to the music industry and the dark forces that rule it. It was indeed about a good girl gone bad.

Since then, Rihanna has become one of the best-selling artists of all time and, concurrently, her work has been used to push all kinds of agendas (as explained in my numerous articles about her).  The ANTIdiaRY videos are no exception. In a very symbolic matter, these videos depict Rihanna’s path to success and, as we’ll see, it is all about being initiated into an industry ruled by an occult elite.

Rihanna’s album Anti was preceded by the release of eight short videos that told an enigmatic story. While the obvious goal of these videos was to promote and generate Internet hype around the album (and Samsung products), the storyline also promotes something else: The occult elite’s control of the music industry.

The cover of the album features a young Rihanna blinded by a crown. The concepts of vision and blindness the central theme of the artwork. 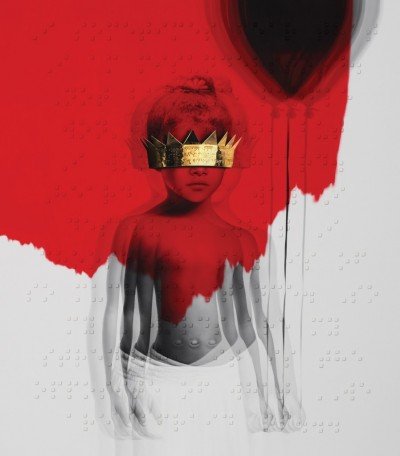 The ANTi album cover features a picture of Rihanna as a little girl (reportedly from her first day at daycare). Blood-like red cover her upper body.

The cover image is actually part of the Israeli-born artist’s “Blind” series, which largely focuses on the concepts of inner and outer vision and the metaphor of “opening” viewers’ eyes. Most of Nachum’s works include subjects with obstructed eyesight and corresponding messages in Braille.
– Vanity Fair, Roy Nachum, the Artist Behind Rihanna’s Anti Cover, Explains What It All Means

In the background is a poem by Chloë Mitchell written in braille. It reads:

I sometimes fear that I am misunderstood. It is simply because what I want to say, what I need to say, won’t be heard. Heard in a way I so rightfully deserve. What I choose to say is of so much substance That people just won’t understand the depth of my message. So my voice is not my weakness, It is the opposite of what others are afraid of.

Yes, the message of ANTIdaRY is indeed “of so much substance” and it is true that most “people won’t understand” it. That is because it is coded with the occult language of the elite. The message does not come from Rihanna, it comes from those who control her.

Using the same symbolism and color codes I’ve outlined in several articles in the past, the ANTIdiaRY videos describe the process required from a young star to access the higher echelons of the music industry. It is about initiation, submission, and control. And the elite takes pride in making talents reenact their own “selling out” in music videos.

The series begins the same way many other ritualistic videos begin: By portraying youth, purity, and innocence.

In the first room, Rihanna is in an all-white room, dressed in a white dress.

White toys and a white piano refer to youth, playfulness and early love of music.

Two little children appear in Rihanna’s room and lure her into a much darker place.

The children (who appear to be twins) walk creepily backward towards a black room.

As she follows the children, she finds a key on which is inscribed R8. It symbolizes her being “chosen” to enter the black rooms of the elite.

As Rihanna follows the two children, they merge into young Rihanna who is blinded by a crown she is too small to properly wear.

The boy and the girl merging into young Rihanna represent the concept of duality that is at the core of all occult transformative processes. The opposition of the colors white and black serve the same purpose.

Young Rihanna, who is blinded by the crown of the elite, represents Rihanna’s core personality, her true self, which is not initiated into the music industry and is therefore “blind” to the industry’s nature. Rihanna’s true self is, however, enticed by the spoils of fame and success and guides her throughout the process.

When Rihanna enters the dark room, she finds a futuristic, state-of-art recording studio.

This studio is a major upgrade from the old white piano in her bedroom. This is where major hits, those who get airplay around the world, are recorded.

When Rihanna touches the mixing board, she moves spastically, uncontrollably, as if she was possessed by an unseen force. That music is clearly infused with something powerful.

After Rihanna spazzes out for a while, a bunch of creepy dudes appear out of nowhere.

These dudes, who appear inside the elite’s recording studio, represent “industry people”, those professionals who will guide and support Rihanna’s career. However, as rapper Q-Tip once stated:

After this first contact with the industry, Rihanna’s occult transformation begins.

Rihanna, who is still wearing white, is being measured for a brand new outfit. Her new, industry-friendly persona is being created.

Rihanna then faces the woman in charge of that room. The woman is standing in front of a dark portal and there is Braille tattooed all over her face.

In ANTIdiaRy, Braille (the raised-dot writing system used by blind people) represents the occult elite’s secret language. The young, “uninitiated” Rihanna with the crown over her eyes is literally blind, not unlike the uninitiated masses who do cannot read the elite’s language. When asked about Braille in her work, Rihanna stated:

“Sometimes the ones who have sight are the blindest.”
– Billboard Magazine, “Rihanna Reveals Album Title & Artwork at Los Angeles Gallery”

A braille-faced woman is clearly a high-ranking person in the system. She touches Rihanna’s key and leads her towards the dark portal. Young Rihanna is waiting for her on the other side.

Rihanna walks into the portal which represents her initiation into the “dark side”.

A different Rihanna emerges from the other side of the portal.

Rihanna is dressed in black, the color of initiation. With her new hairstyle and wardrobe, Rihanna now looks like a pop star, complete with tattoos and a skull ring.

The good girl has gone bad.

If one does not directly descend from an elite bloodline family, initiation requires a blood sacrifice.

Still dressed in black, Rihanna tattoos a guy right on the forehead.

Rihanna marked the guy with Braille (the elite’s language). Ink (looking an awful lot like blood) flows from the guy’s eyes and nose and pools on the floor. The blood sacrifice is done.

In Room 5, Rihanna finds herself naked in a bath while people watch her from behind screens. As a pop star selling sex, she must expose herself to the faceless masses to further her career.

A crowd of people talking surrounds Rihanna, who is alone in a bathtub.

She dips her head in the water, like a self-baptism.

When Rihanna re-emerges, she is surrounded by blue, ink-like liquid. It appears that the process is slowly killing herself as well.

Rihanna follows young Rihanna into a dark room full of industry people. She walks towards a stage that appears to emit waves of unseen power.

The stage is also a powerful medium. The same type of power emitted at the recording studio causes everybody to lean back in waves.

She then climbs upstairs onto the stage. She is entering a higher echelon of the industry. The multiple reflections of Rihanna represent the splitting of her core personality into industry-made personas.

On the stage, Rihanna is ready for the next level.

Rihanna enters an office full of symbols that scream out “occult elite”.

Inside the marble office is a pair of Baphomet horns and an Egyptian bust recalling the Egyptian magic roots of the occult elite.

A woman points Rihanna towards another room. On the desk are two horned heads (Baphomet) and a pyramid of sorts. Rihanna is in the offices of the higher-ups of the elite, where their true symbols are out in the open.

Rihanna is directed to a room that appears to freak her out.

Rihanna finds a golden room (which looks like a bank safe) with Braille (representing the language of the elite) covering the walls. The floor is full of gold coins.

Young Rihanna then appears and gives her crown to Initiated Rihanna.

Rihanna is ready to become an “Illuminati queen”.

After putting on the crown, the room goes dark.

Rihanna uses the key she found in the first video key to open a white door.

Industry people wait for her in her original room.

While, in the first video, the room was “real”, it now looks like fake, like a TV show set.

Her white room is now full of sand, recalling the lifelessness of the desert and abandonment. Innocent Rihanna in a white dress doesn’t exist anymore.

Crowned Rihanna finds the dualistic kids sleeping on her bed. As she lays down on them we understand that her occult transformation is complete.

Rihanna then looks at the night sky.

She sees a huge star surrounded by a circle. The “eye in the sky” will never stop watching her from now on.

The story told through the videos show Rihanna going through an occult transformation as she rises in status in the music industry. Her journey begins as an innocent, white-clad girl. Lured in by the elite’s crown, Rihanna is sucked into the music industry’s machine, complete with high-tech studios that emit supernatural power. After her initiation into the industry and now dressed in all black, Rihanna performs a blood sacrifice and tastes super-stardom. She then enters the offices of the higher-ups of the occult elite and is given the crown making her “royalty” in the industry. When she goes back to her original room, things are different. The innocence is gone. Rihanna is a star, but her true self is gone. She is now a product of the music industry.

The ANTIdiaRY videos depict, in a very symbolic matter, the inner workings of the music industry. They explain who really rules the industry and what is required from stars to become SUPERstars. Reaching that rarefied status comes at a cost: One must give up one’s “old-self” to embrace a new persona “tailor-made” by the elite. After the destruction of one’s original self, the only thing that remains is that artificially created, black-dressed persona that is seen around the world, but that is pretty much dead inside.

If you’ve read other articles on this site, you’ve probably noticed that this narrative (and the color codes accompanying it) have been used countless times, on countless young pop stars. The occult elite loves to expose the masses to that narrative because, right before our eyes, they are telling us exactly how they control these stars and, on a wider scale, how they control the world. Sadly, not unlike young Rihanna, most of the world does not understand the elite’s language. As Rihanna said: “Sometimes the ones who have sight are the blindest.”

FacebookTwitterSubscribe
Related Topics:rihanna
Up Next

“Torture” : A Creepy Video About the Jacksons Being Subjected to Mind Control

The Occult Universe of David Bowie and the Meaning of “Blackstar”