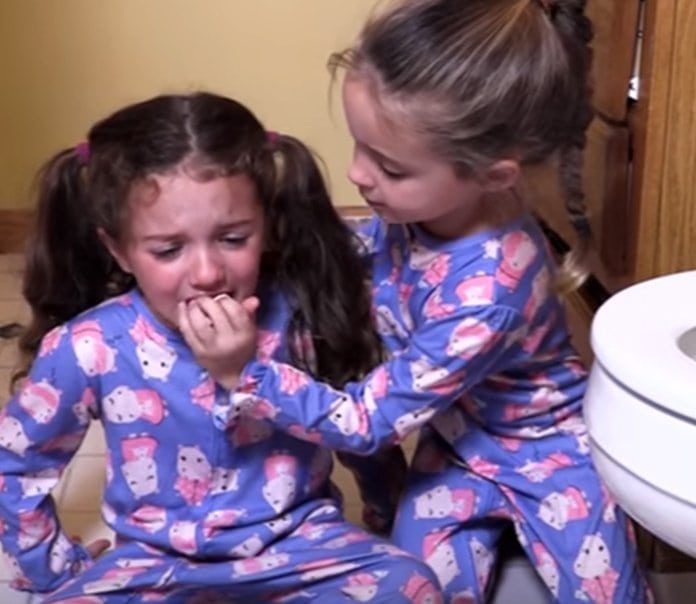 A great number of YouTube videos aimed at children contain creepy, disturbing, violent and sexual content. Some even border on child abuse. It is time to take a closer look at these videos that generate millions of views per day.

Warning: This article contains disturbing images … although they’re all taken from children’s videos.

There is no easier way to get small children to pipe down than handing them a tablet or a smartphone. Toddlers know how to launch YouTube, play videos and even navigate to other “recommended videos”. This keeps children silent and entertained for long periods of time – a luxury that busy parents greatly appreciate.

While most parents hear the children’s music playing in the background, they rarely watch the videos played by their children. When they do glimpse at the screen, they see a  character such as Spiderman or Princess Elsa and assume that everything is cool. But everything is not cool. There is something terribly wrong with some children’s YouTube videos and, often, those who create them do not have the best of intentions.

A great deal of these videos contains weird, disturbing, violent and even traumatizing content. They are insidiously mixed with other children’s videos, causing them to appear as “recommended videos” by YouTube and, therefore, easily accessible to children.

I am not talking about rare, obscure videos hiding in the depths of YouTube, I am talking about channels that cumulate billions of views.

Of course, the main motivation behind these videos is profit. All it takes is a few superhero costumes and a smartphone to create videos that can potentially generate lots of revenue.

However, some of these videos are simply not right. There appears to be a motivation that goes beyond profit. Some videos trick children into watching traumatizing content, others expose them to oddly “adult” situations. Even worse, some appear to cater to adults … who like to watch children. Here are some examples of the video cancer growing on YouTube (I won’t be linking to any of these videos or channels because I don’t want to help them get more hits).

Some video channels use popular characters to trick children into watching violent and disturbing material. The BBC recently reported on some of these videos.

Mickey Mouse gets his ear cut off with scissors. Lots of blood.

An evil little Spiderman cuts the top off a girl’s bikini. 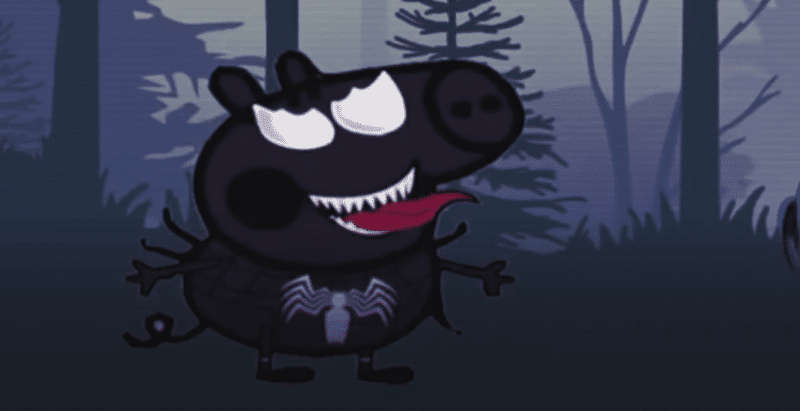 In another disturbing video, Peppa Pig turns into Venom and looks quite demonic.

Many videos clearly exploit children’s visceral fear and repulsion of certain things such as blood, syringes, cutting skin, tarantulas, evil clowns attacking them, etc. Children are horrified by what they are watching yet they cannot look away because the content is engrossing.

A great number of videos revolve around the theme of cutting open the stomach and extracting all kinds of weird and horrible things. In this video, a scalpel cuts open this bear’s stomach and a big ugly worm pops out.

In this video, a “nurse” cuts open a small girl’s stomach and takes out all kinds of scary objects such as a huge kitchen knife. 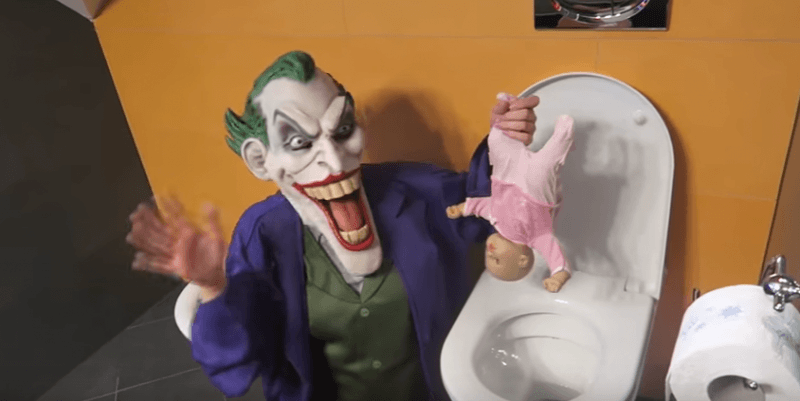 Here, someone dressed as the Joker threatens to throw a baby down the toilet. A great way to start potty training. 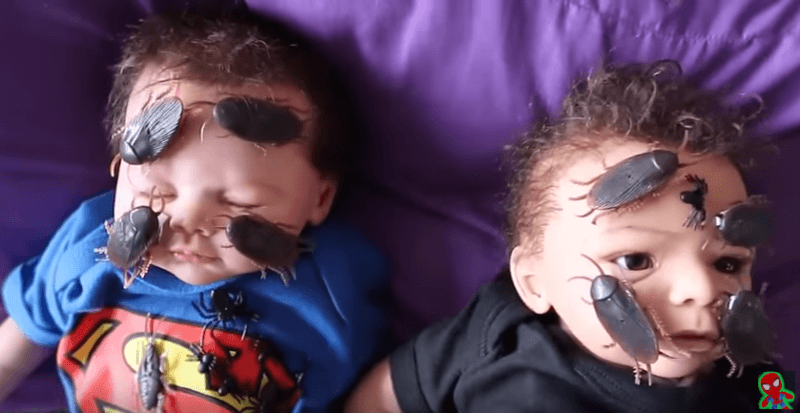 In this video, creepy fake babies end up covered with spiders and cockroaches. 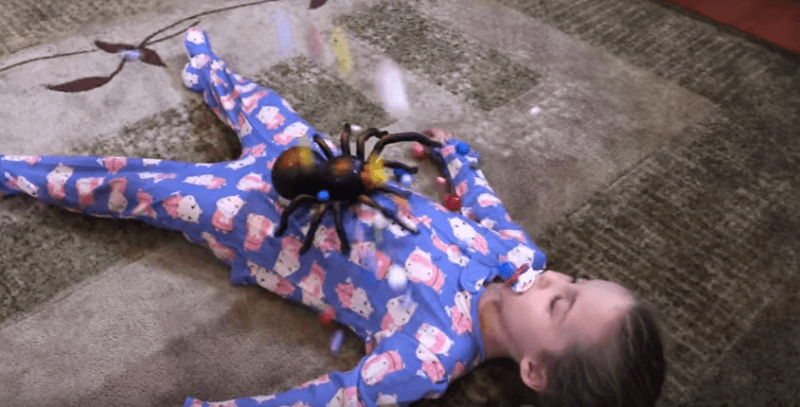 A giant tarantula crawling on a girl sleeping with a pacifier. 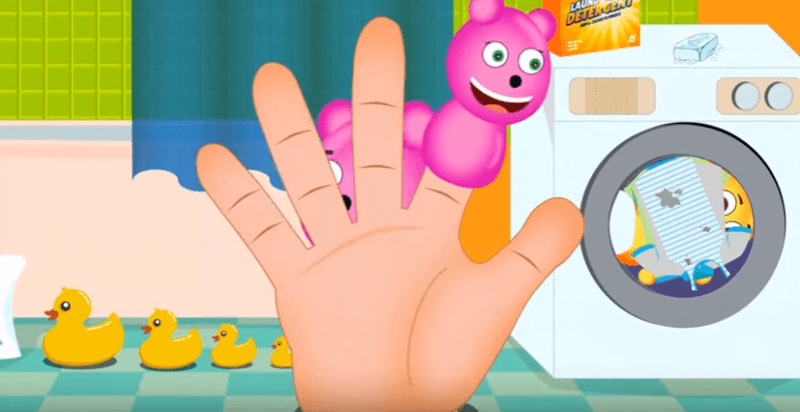 In this video, a bear poops all over his entire family. He then ends up stuck in the washing machine as family members drop their dirty clothes inside of it. All the while, a horrible rendition of the “Daddy Finger” song plays in the background. So many videos feature that song – as if something about it captures children’s attention.

Some videos are clearly sexual – in a creepy and perverted way.

This video strongly hints at Spiderman doing it with Elsa. 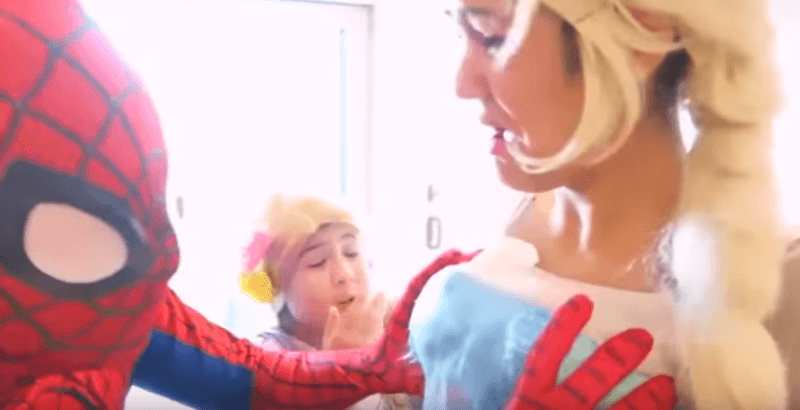 Here, Spiderman grabs Elsa’s breasts for a very long time. Hulk and a bunch of other dudes are watching in the background. 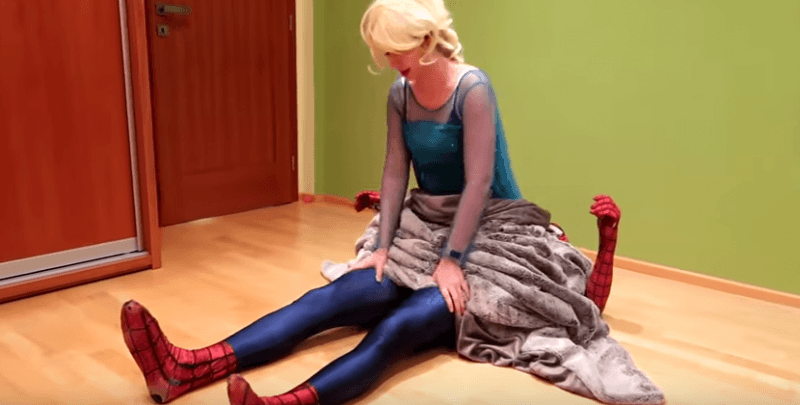 This entire video features Elsa and Spiderman in all kinds of … positions.

YouTube is also quick to recommend a bunch of other similar videos.

Each video has millions of views.

Several YouTube channels star young children in all kinds of bizarre situations. Other than the fact that these children might be forced to appear in hundreds of videos for profit, they are also often made to enact traumatic situations. Here are screenshots from a channel named MaddaKenz Vlogs where the girls often appear to be genuinely unhappy and distressed. 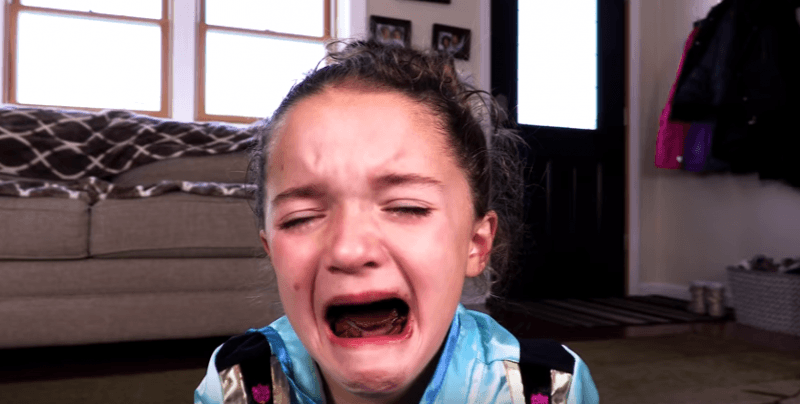 Many videos feature the girls screaming or crying their heart out. In this video, this girl has something in her mouth that tastes horrible … And she’s forced to keep it in her mouth … And she doesn’t seem to be acting. Later in the video, they are eating snow with dog pee on it. Hopefully, it is fake pee. But still. 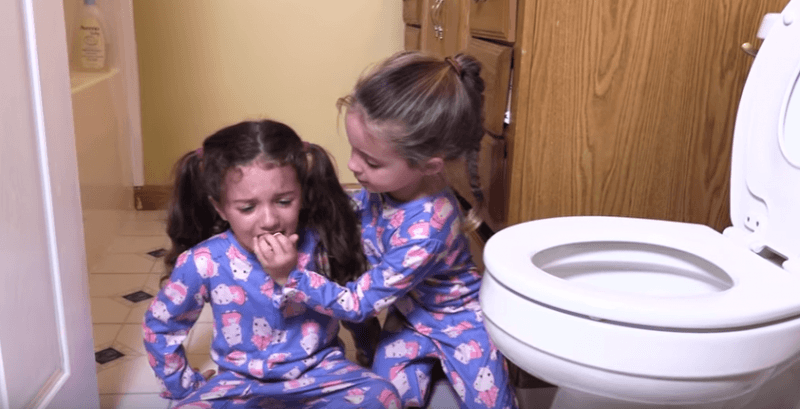 Here, a girl takes something from the toilet and force feeds it to the other girl. She doesn’t like this. 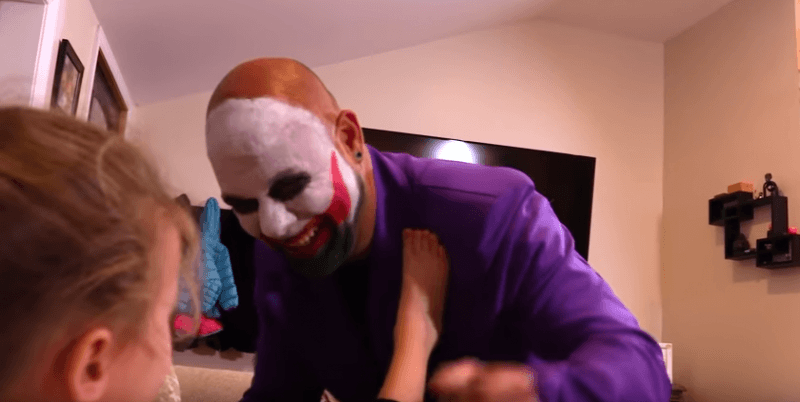 In another video, a creepy dude with clown makeup barges into the girls’ house and starts grabbing them while the girls scream and attempt to resist him.

Things get even weirder – to the point that I feel uncomfortable even posting screenshots on there. But this filth needs to be exposed. 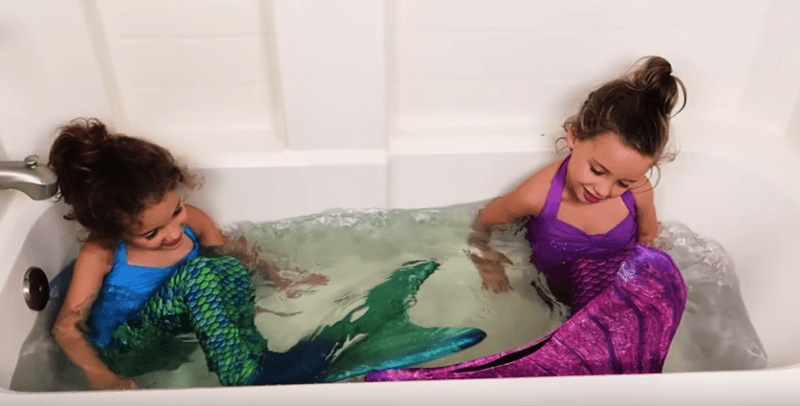 The two girls are sitting in a bathtub dressed as mermaids. Who would actually sit there and watch that? You know who.

The girls are then given lipstick and they begin smearing their faces with it. There are actual adult videos that feature this type of stuff.

Unfortunately, there are other channels that produce these kinds of videos. 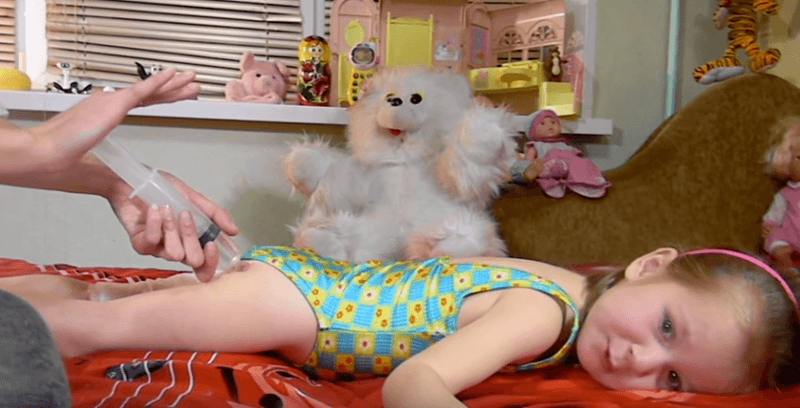 There are tons of bizarre videos of children in bathing suits getting a shot in the butt. WHY?!?!? 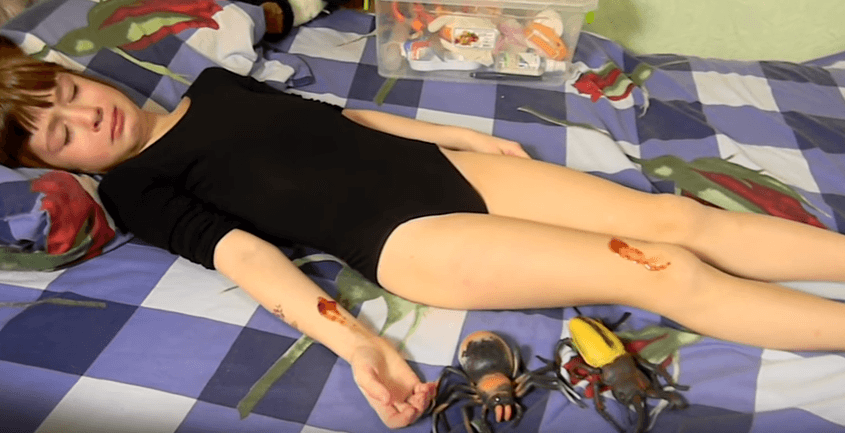 A girl in a high-cut outfit appears to be bleeding + there are bugs around her. EVERYTHING about that video is wrong. 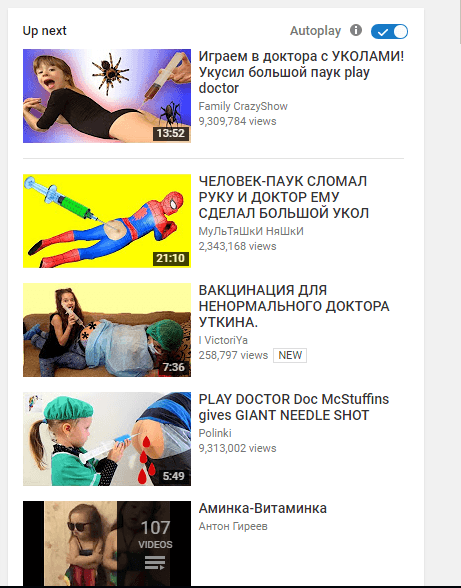 “Recommended videos” leads to a bunch of disturbing thumbnails and so much more content.

Viewing these videos in order to write this article was a disturbing experience. Most of them trigger that gut feeling that something is wrong and that children’s innocence is being preyed on by twisted minds. Although there’s an absurd amount of this type of content on YouTube (this article could have been 10 times longer), I attempted to expose the various reasons why these videos are cancerous. Using underhanded and manipulative ways, these videos deliver disturbing content directly into the brains of very young children.

One wonders how these “amateur” channels can even exploit the likeness of these children’s characters without being hit with copyright infringement lawsuits. Also, many channels are clearly sponsored by major brands to produce videos that brainwash children into consuming their stuff (I recall watching a video where The Hulk eats Kinder chocolates for like 4 minutes non-stop). Obviously, there is big money and big corporations behind these cheap-looking videos.

However, the true aim of this article is not about YouTube moderation, it is about vigilance: Keep an eye on the videos watched by children. Analyze their contents. It only takes a few taps on a touchscreen for children to end up watching videos custom-made to poison their minds and shock their very core. And don’t be surprised if some of these video channels are linked to actual child abuse systems.

“Belluminati”: Is Taco Bell Trolling Conspiracy Theorists or Is the Illuminati Flaunting in Plain Sight?