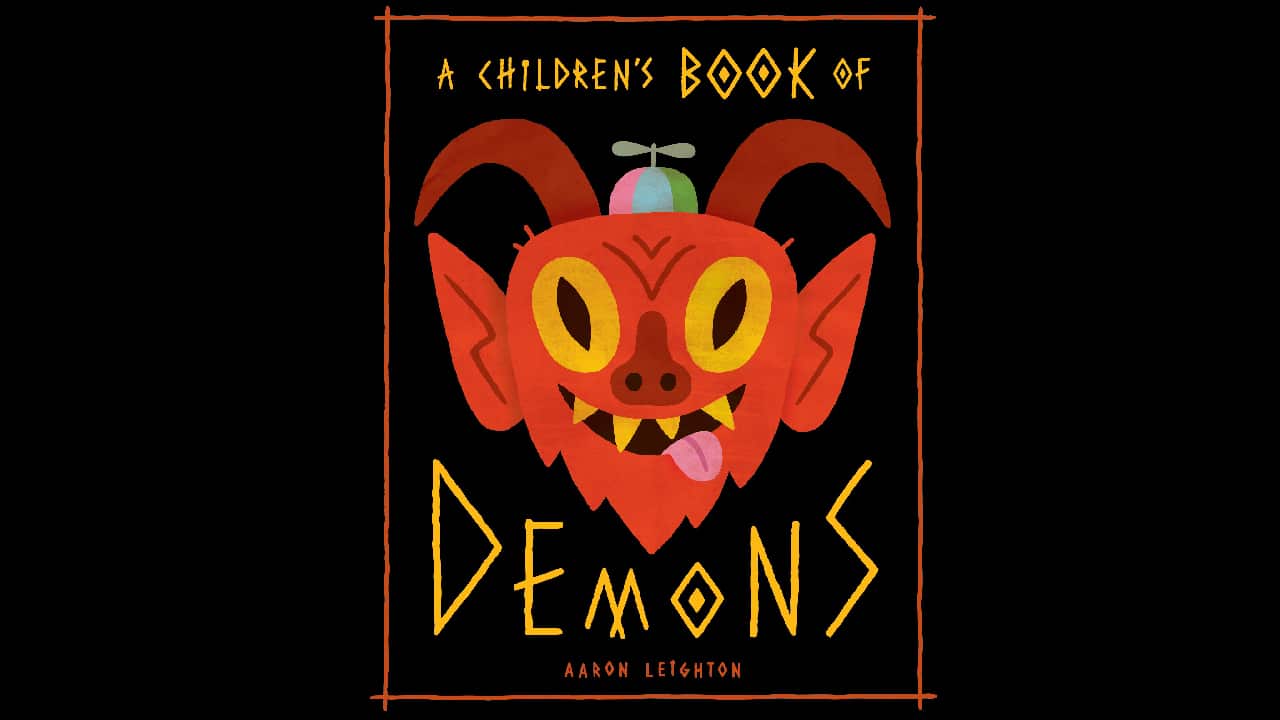 Although it might the worst idea for a children’s book in world history, A Children’s Book of Demons exists. It is published, widely distributed and it is sold on Amazon, at Walmart and some of the largest book stores in the country. Here’s the summary of the book by author Aaron Leighton:

Don’t want to take out the trash tonight? Maybe you’re swimming in homework? Perhaps that big bully is being a real drag? Well grab your coloured pencils and sigil drawing skills and dial up some demons! But be careful, even if these spirits are more silly than scary they are still demons.

A review of the book says:

Leighton integrates a hands-on craft element into this playful guide that invites readers to conjure gentle demons by writing their sigils, which serve as “a phone number” straight to the spirit. The demons necessitate specific summons (a riddler named Corydon requires a sigil “drawn in bright red, the colour of a clown’s nose–preferably while you’re giggling”), and express specific characteristics and abilities that range from pragmatic to gross. They include “Flatulus,” whose talent is passing gas; “Quazitoro,” an expert at finding missing objects; and “Spanglox,” “the best-dressed demon in the underworld,” who offers cutting-edge fashion advice. Leighton’s renderings of the multieyed, multiarmed, sharp-toothed demons are outlandish without being creepy, and the creative concept will likely inspire some readers to create demons of their own. Ages 5-10.

A Children’s Book of Demons is basically a grimoire (a manual of witchcraft to invoke demons and the spirit of the dead) for children. It contains 72 demons that can be conjured by children for their personal benefit (which is the definition of black magic). Each demon is accompanied by a sigil (a symbol representing a demon imbued with occult power) and a “cute” drawing (that is replete with occult symbolism). 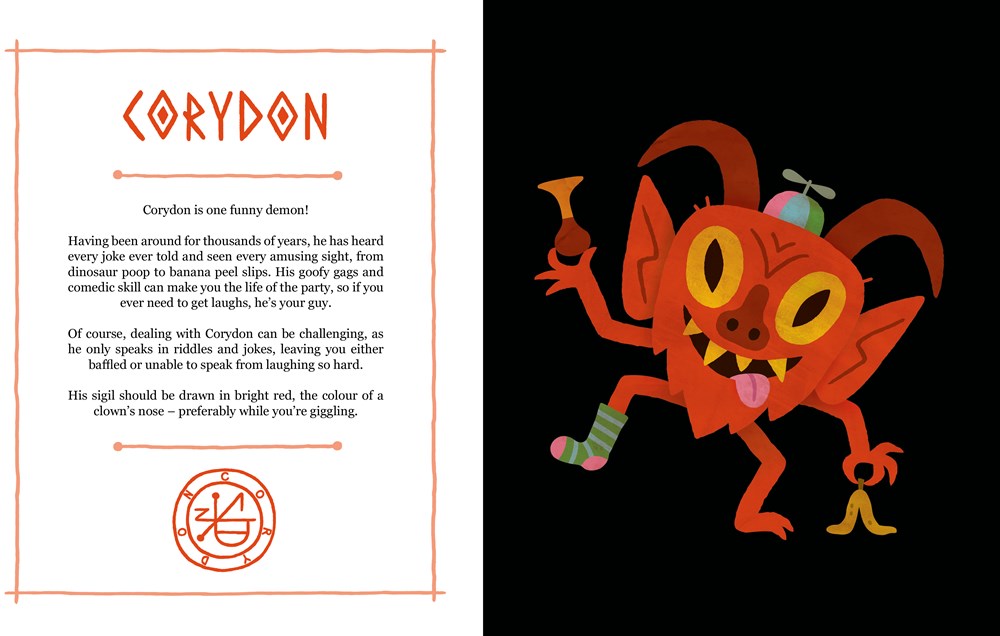 There are several things worth noting here. First, the drawing of the demon is highly inspired by Baphomet, complete with the “as above, so below” hand sign.

Second, the name Corydon is not random. It is the name of a pedophile character in Virgil’s Eclogues: A shepherd who’s in love with a young boy named Alexis.

The name’s association with “boy love” was cemented by the French author André Gide’s who titled his book defending homosexuality and pederasty (a sexual relationship between an adult man and a pubescent or adolescent boy) Corydon.

So, yeah, this is a strange name choice for a book intended for children aged 5-10.

Here are some other demons. 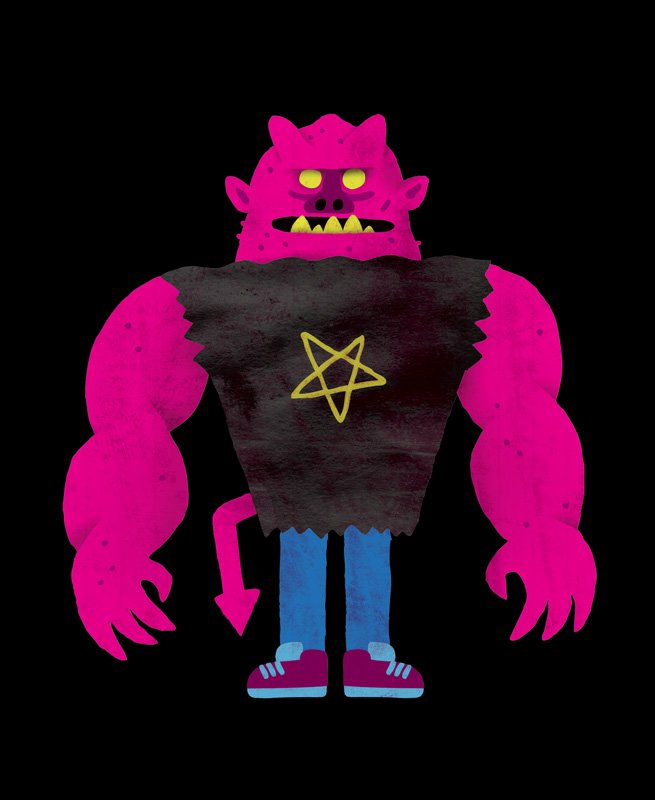 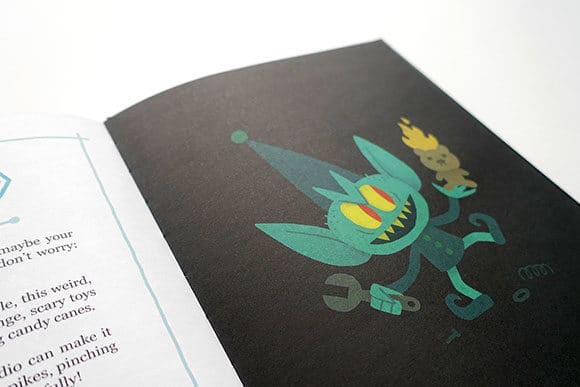 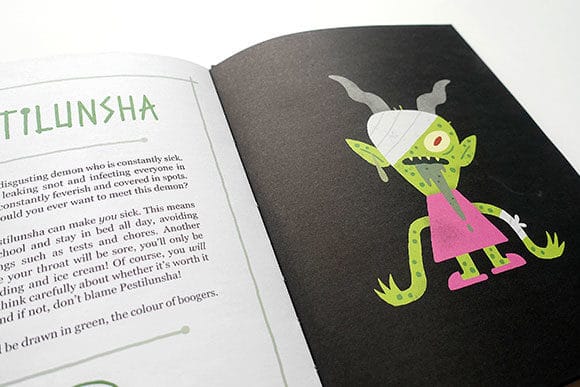 To summon these demons, children are encouraged to reproduce their sigils, which are very similar to actual sigils in the Goetia – the classic reference work for black magic. 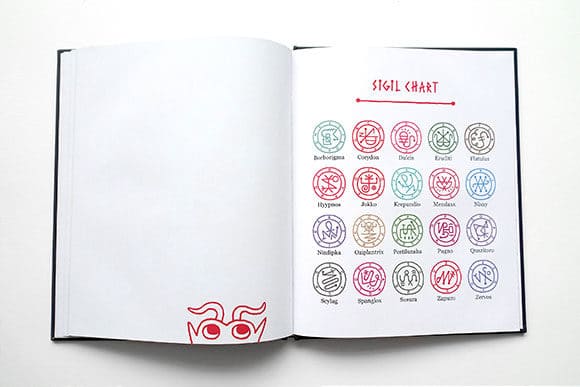 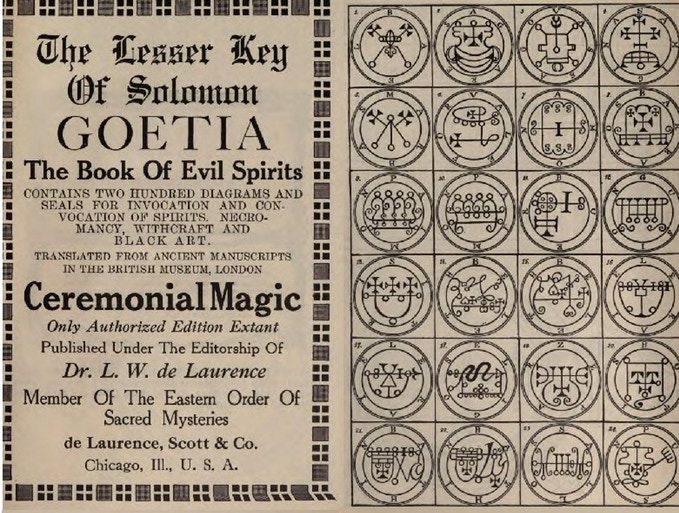 A sample of the Goetia.

Goetia or Goëtia is a practice that includes the conjuration of demons, specifically the ones summoned by the Biblical figure, King Solomon. The use of the term in English largely derives from the 17th-century grimoire Lesser Key of Solomon, which features an Ars Goetia as its first section.
– Wikipedia, Goeita

The book was written by a Canadian artist named Aaron Leighton. Here’s his biography.

ARON LEIGHTON is an award-winning illustrator and art director, as well as a fan of all things occult. His first book with Koyama Press, Spirit City Toronto, was published in 2010. Aaron lives in Toronto, ON and spends his free time wrestling with a black cat.

The author’s bio pic is rather odd. 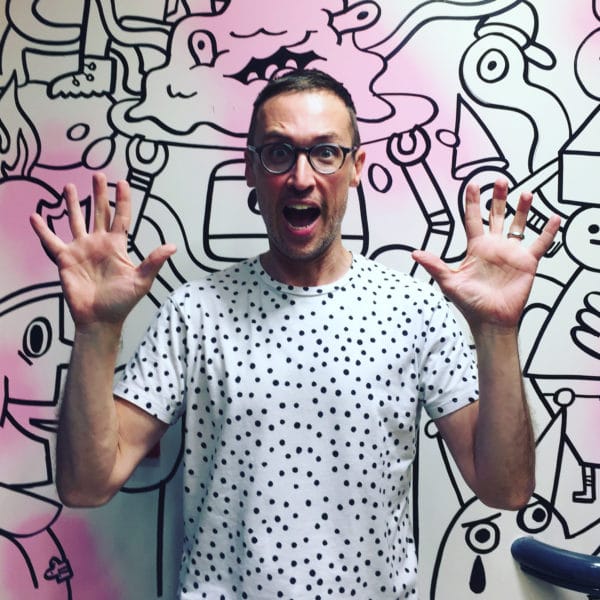 If one can go past the annoying soyboy face, there’s other stuff going on in that pic. First, why is there a phallic object going into that cartoon’s mouth at the bottom right? Why is it crying? Finally, the author’s pose is rather reminiscent of a pic that is also highly symbolic. And, considering the fact that Leighton is a “fan of all things occult”, this might not be a coincidence. 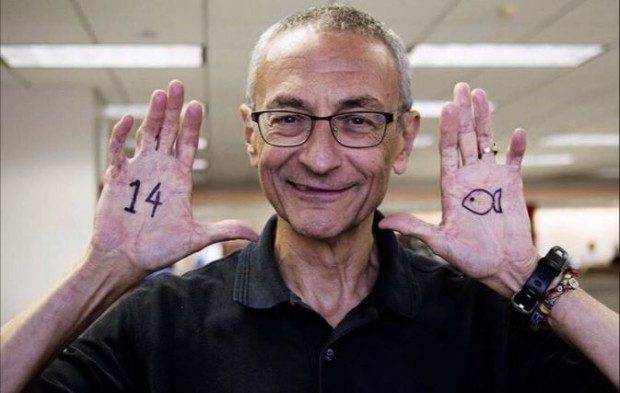 Black Magic is Not a Game

A Children’s Book of Demons is yet another attempt at normalizing black magic and satanism to children. By catering to children’s wants and needs (chores, homework, etc.), the book over-simplifies the extremely dark and complex world of ceremonial magic and turns it into a fun game. However, any occultist will be keen to say: Black magic is not a game. And it is definitely not for children.

To truly understand black magic, one must read the words of actual occultists, not “witchcraft is fun” bloggers. Eliphas Levi (the guy who drew Baphomet) wrote in his classic Dogmes et Rituels de la Haute Magie:

Black Magic is really only a graduated combination of sacrileges and murders designed for the permanent perversion of a human will and for the realization in a living man of the hideous phantom of the demon. It is therefore, properly speaking, the religion of the devil, the cultus of darkness, hatred of good carried to the height of paroxysm: it is the incarnation of death and the persistent creation of hell.
– Eliphas Levi, Dogmes et Rituels de la Haute Magie.

True black magic is performed with the aid of a demoniacal spirit, who serves the sorcerer for the length of his earthly life, with the understanding that after death the magician shall become the servant of his own demon. For this reason a black magician will go to inconceivable ends to prolong his physical life, since there is nothing for him beyond the grave.

The most dangerous form of black magic is the scientific perversion of occult power for the gratification of personal desire. Its less complex and more universal form is human selfishness, for selfishness is the fundamental cause of all worldly evil. A man will barter his eternal soul for temporal power, and down through the ages a mysterious process has been evolved which actually enables him to make this exchange.
– Manly P. Hall, Secret Teachings of All Ages

In short, summoning demons is the very last thing children should be playing with. Even if the demons are made-up, the sigils could very well be charged with actual occult powers.

To those who believe that this is all bunk, remember this: Some of the most powerful, intelligent and influential people in world history believed in this stuff and studied it extensively. So, as I like to say, the fact that you are not aware of something doesn’t mean it doesn’t exist.

Christopher Lee Describes the Power of Satanic Rituals in 1975 Video