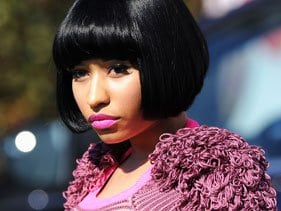 Just days after Nicki Minaj’s cousin was killed, a Nicki track called “We Miss You” leaked online with lyrics that address the murder of someone close to her. As the rapper noted online shortly after the song hit the Web, however, “We Miss You” was recorded nearly 12 months earlier.

“Tho the lyrics of ‘We Miss You’ eerily depict the circumstances surrounding my cousin’s death, I wrote & recorded that song on 5/24/2010,” she tweeted. “It was sent to Mariah Carey & Keyshia Cole over a year ago for a possible feature. It didn’t make Pink Friday due to clearance issues. It’s an unauthorized leak.”

Minaj then thanked her fans for their support in the wake of the tragic news: “Thank u ALL for your kind words and well wishes. Love.”

After announcing the news of her cousin’s death on Twitter, the rapper had stayed off the micro-blogging site until Thursday’s (July 7) leak. Minaj did receive a tweet of encouragement and love from Femme Fatale tourmate Britney Spears: “Please keep @NickiMinaj & her family in your prayers. … keep up the amazing love and support you guys have for her.”

“We Miss You” samples Prince’s “Diamonds and Pearls” (which could explain the clearance issues) and is a somber ode to a fallen friend. As the beat kicks in, Nicki spits, “Why’d you have to leave in July?/ On a peaceful and serene summer night,” eerily mirroring the events of her cousin’s death.

Although the lyrics make reference to the fact that Nicki is rapping about a lover, it seems that the references to murder are very similar to how her cousin died last weekend when he was gunned down in Brooklyn. She later says on the song, “You said that you would leave these streets, and I know you didn’t mean in a body bag/ But now we see you were not bulletproof, and I’m mad ’cause you were the best that I ever had.”

There are indeed strange “coincidences” surrounding this story:

Could all of this be indicative of a ritual sacrifice? Difficult to say.  Some industry insiders have claimed that these sacrifices are required to be “initiated into the industry”. I cannot give a definite answer for this particular case but, as some would say: there is no such thing as coincidences.